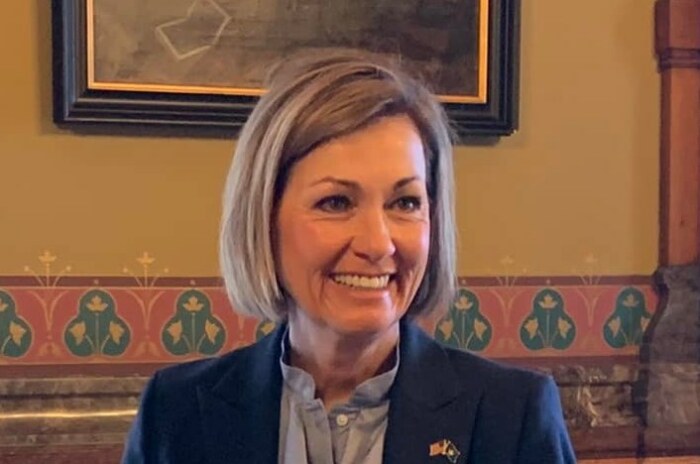 For a second straight year, Governor Kim Reynolds has reappointed Erik Helland to Iowa's Public Employment Relations Board (PERB) after Helland failed to win Iowa Senate confirmation. In an apparent effort to circumvent the legally required confirmation process, Reynolds appointed Helland to a different position on the three-member board, which adjudicates labor disputes within state and local government or school districts.

She used the same maneuver last summer to name Helland as PERB chair after the Iowa Senate did not confirm him during the 2021 legislative session.

The governor has not filled the now-vacant position of PERB chair, saying in a recent letter to the top Iowa Senate staffer that her administration "has initiated, but has not yet completed, the selection process." That leaves the board with no quorum; Reynolds has kept one position unfilled since August 2020.

The long-running vacancy allows the governor's preferred nominees to remain on the board, even if they don't receive a two-thirds confirmation vote in the state Senate. Asked for comment on Helland's reappointment, the Democratic senators who reviewed the PERB nominees accused the governor of "a partisan power grab" and "rigging the appointment process so she can get her way."

Reynolds' spokesperson Alex Murphy did not respond to eight inquiries about the PERB appointments between late May and July 28.

"THIS POSITION IS SUBJECT TO CONFIRMATION BY THE SENATE"

Many Iowa boards and commissions must have their members confirmed by the Senate. But PERB has more responsibilities than do most boards appointed by the governor. Its members supervise administrative law judges, facilitate mediation or arbitration, oversee recertification elections for public employee bargaining units, and resolve labor disputes such as prohibited practice complaints, whistleblower complaints, and grievance or discipline appeals.

Unlike Iowans serving on most state boards and commissions, PERB members are paid a full-time salary and required by law to "devote full time to their duties."

When Reynolds appointed Helland to the board in April 2020 and named him board chair in July 2021, each letter advised, "Please be aware that under section 20.5 of the Iowa Code, this position is subject to confirmation by the Senate." However, the governor hasn't shown any concern about whether lawmakers approve of her picks for this board.

Republicans currently hold a 32-18 Iowa Senate majority, so the governor's nominees need support from at least two Democrats to reach the two-thirds threshold of 34 members.

State senators have never voted on Helland's nomination. Reynolds withdrew it at the end of the 2021 legislative session, along with that of other nominees who didn't have the votes. On the final day of this year's session, Reynolds informed the Senate that she was withdrawing four names, including Helland and Jane Dufoe, whom the governor had appointed to PERB last year.

According to the governor's July 22 letter to Secretary of the Iowa Senate Charlie Smithson, Helland will hold the position Dufoe occupied, to serve out the remainder of a four-year term that expires in April 2024. Reynolds did not reappoint Dufoe to either of the PERB vacancies. It's not clear whether Dufoe sought to stay on, or whether she will transition to another job in state government or the private sector.

By law, PERB "shall consist of three members appointed by the governor," of whom no more than two "shall be of the same political affiliation." Since its creation in 1974, the board has typically had two members from the governor's party and one member of the other party or independent. But last year, Reynolds appointed Dufoe (a Republican) to replace Mary Gannon (a Democrat), leaving the board with Republican members only. (Helland is a former member of the Iowa House who was in GOP caucus leadership.)

The governor's staff never responded to inquiries about why Reynolds replaced Gannon last September. Naming Dufoe to the vacant PERB position instead would have preserved partisan balance and filled all three board positions, in keeping with Iowa Code.

"JUST ANOTHER EXAMPLE OF REYNOLDS RIGGING THE APPOINTMENT PROCESS"

State Senator Todd Taylor served on the subcommittee that considered the PERB appointments this year. After the legislature adjourned in May, Bleeding Heartland asked Taylor why Democrats weren't willing to confirm Helland or Dufoe. He explained that ever since the Republican trifecta eliminated most public employee bargaining rights in 2017, the governor's appointees to PERB "have failed to grasp their role in ensuring the rights and due process that public employees still have."

Taylor was also concerned that Reynolds "has consistently failed to fill all three positions on this board, which is critical for three-member board that makes important decisions about the lives of workers. If the Senate had confirmed these two appointees, it would have continued to leave the Public Employees Relations Board unbalanced and without a non-Republican member."

He added, "It would be a mistake for the Governor to appoint the same two people to the PERB board in the same or different seats."

I sought comment again after the governor's office announced Helland's appointment in a July 27 news release. In a written statement, Taylor characterized that move as "just another example of Reynolds rigging the appointment process so she can get her way."

For the last two years, the Governor’s office knew Erik Helland didn’t have the votes, but has played games by withdrawing his name and then re-appointing him when the legislature adjourned, now for a second time.

For the last year, the Governor has stacked this Board with Republicans without appointing a Democratic or No Party member to meet the law regarding partisan balance.

Public employees as well as cities, counties, school districts and the state deserve a full board, with partisan and gender balance under the law, to administer the business that comes before the board.

State Senator Nate Boulton, the ranking Democrat on the Iowa Senate Labor and Business Relations Committee, had this to say about Reynolds reappointing Helland.

It’s no secret this administration has focused on stacking the deck against public employees. But this is an egregious abuse of power that makes a mockery of the entire purpose of the Senate’s confirmation authority in addition to blatantly circumventing the requirements for partisan balance.

The Governor’s office refusing to work with Senate Democrats on confirmations isn’t just problematic as a partisan power grab. No, this threatens the constitutional balance of the powers shared by our branches of government.

Reynolds' spokesperson Murphy has not replied to emails asking about the longstanding PERB vacancy or the legal basis for circumventing the Senate confirmation process in order to keep Helland on the board.

I will update as needed if the governor's office responds, or when a new PERB appointment is announced.

Top photo of Governor Kim Reynolds cropped from an image first posted to her official Facebook page on May 13.