In an unusual move, Governor Kim Reynolds is allowing two state agency directors she appointed early this year to continue serving through next year's legislative session, even though they lacked the votes to be confirmed by the Iowa Senate.

Reynolds withdrew the nominations of Department of Management Director Michael Bousselot and Department of Administrative Services Director Adam Steen shortly before state lawmakers adjourned for the year in May. Days later, she rejected the directors' resignations, saying she would resubmit their names to the Senate in 2022, documents obtained through public records requests show.

The governor's office has not publicly announced Reynolds' decision to hold over Bousselot and Steen and did not respond to Bleeding Heartland's inquiries.

Under Iowa's constitution, the governor's appointees need a two-thirds majority (at least 34 votes) for Senate confirmation. Every year, state senators confirm the vast majority of those nominated to lead state entities or serve on boards and commissions. But a handful of the governor's picks run into trouble.

As the legislative session wound down, it became clear Bousselot and Steen were not on track to be confirmed. Republicans now enjoy a 32-18 Senate majority, but this year, Reynolds' nominees needed at least three Democratic votes, because GOP State Senator Zach Nunn missed most legislative work due to a military deployment.

Both directors wrote to Reynolds on May 18, offering their resignations effective July 17. Steen's resignation letter cited "the political dynamic of this role," while Bousselot's referenced "the political climate," an indirect way of saying they didn't have the votes.

The Iowa House and Senate adjourned late in the evening on May 19. The following afternoon, Reynolds' chief of staff Sara Craig Gongol informed agency directors the governor had withdrawn the nominations of Bousselot and Steen but rejected their resignations. Copies of the governor's letters to each director were attached to Craig Gongol's May 20 email; those documents are enclosed at the end of this post.

Under Iowa law, appointees rejected by the Senate can continue to serve for at most another 60 days (hence the July 17 effective dates for the directors' resignations). To avoid that outcome, governors occasionally withdraw nominations so their picks are never formally voted down.

Even so, most nominees who lack support in the Senate are not held over. After Department of Administrative Services Director Janet Phipps was not confirmed during the 2019 legislative session, Reynolds soon appointed Jim Kurtenbach to lead the agency. He served for less than a year and was replaced by Paul Trombino in an interim capacity in March 2020. Trombino's name was never submitted to the Senate, because in January 2021 the governor named him to lead the Homeland Security department (a position not subject to Senate confirmation) and put Steen in charge of the human resources and procurement agency.

"GOVERNOR REYNOLDS IS NOT ABOVE THE LAW"

Senate Democratic lawmakers and staff were not informed the governor was keeping Bousselot and Steen in their current positions. They learned about Reynolds' actions when I sought comment last month after receiving documents requested from the management and administrative services departments. Senate Minority Leader Zach Wahls told Bleeding Heartland,

James Larew, who served as legal counsel and chief of staff to Governor Chet Culver, characterized the governor's decision as "a violation of a norm." Other sources with deep knowledge of the Iowa Senate concurred that while it is not unprecedented for a governor to hold over an appointee after withdrawing their nomination, it is quite unusual.

The best-known precedent for the current situation happened in 2006. Governor Tom Vilsack withdrew Chris Godfrey's nomination to be state Workers' Compensation commissioner because he was not going to be confirmed, then appointed him as interim commissioner. The following year, Culver nominated Godfrey to lead the state's Workers' Compensation Division again, and the Iowa Senate confirmed him unanimously.

Governor Terry Branstad withdrew Nick Wagner's nomination to serve on the Iowa Utilities Board in 2013, after Democrats spoke out against the choice. But Wagner continued to serve on that powerful board and was confirmed during the 2014 legislative session with one vote to spare.

ANOTHER WITHDRAWN NOMINEE CONTINUES TO SERVE ON STATE BOARD

Reynolds withdrew a third nominee from the Iowa Senate on the final day of this year's session. Erik Helland, a former Republican legislator who served in the Iowa House from 2009 through 2012, had been nominated for one of three spots on the Iowa Public Employment Relations Board. Unlike most other state boards, PERB members have paid, full-time positions.

Senate Democrats previously rejected two other Reynolds appointees to chair that three-member board: Mike Cormack in 2018 and Cheryl Arnold in 2020. The governor submitted Helland's name for one of the regular board positions this year, but PERB's website now lists him as board chair. That is to say, Helland is not continuing in the position for which he wasn't confirmed. Rather, Reynolds named him to the other vacancy on the same board, which has been unfilled since shortly after the Senate rejected Arnold along party lines.

Helland told Bleeding Heartland in an August 5 telephone interview that the governor appointed him as PERB board chair on July 16. The governor's office did not announce that decision publicly, and a July 30 news release that listed 139 other appointees to state boards and commissions did not mention Helland.

Asked about his confirmation, Helland said he had reached out to every state senator and "met with as many that would meet with me" during this year's session. He told them about changes he's pushing to make PERB "more transparent and accountable," and to address the backlog of pending cases. Conversations with state lawmakers "were all positive," he said.

Steen, Bousselot, Helland, and Reynolds' other nominees will each need to line up at least two Democratic votes to be confirmed in 2022. Republicans are expected to have their full contingent of 32 senators at the statehouse, since Nunn's deployment has ended.

UPDATE: Bousselot confirmed he will resign as Department of Management director to focus on campaigning as the Republican nominee for the September 14 special election in Iowa House district 37. 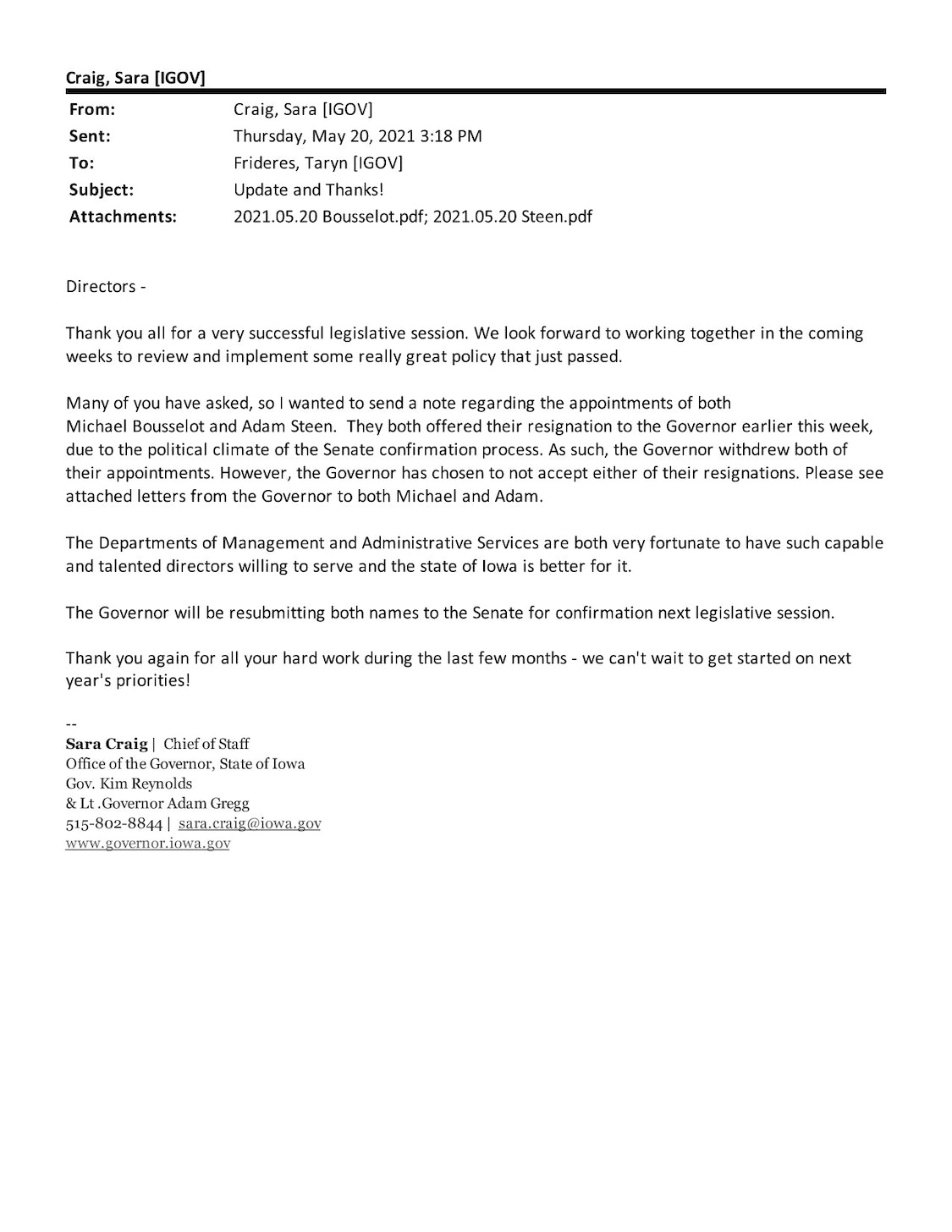 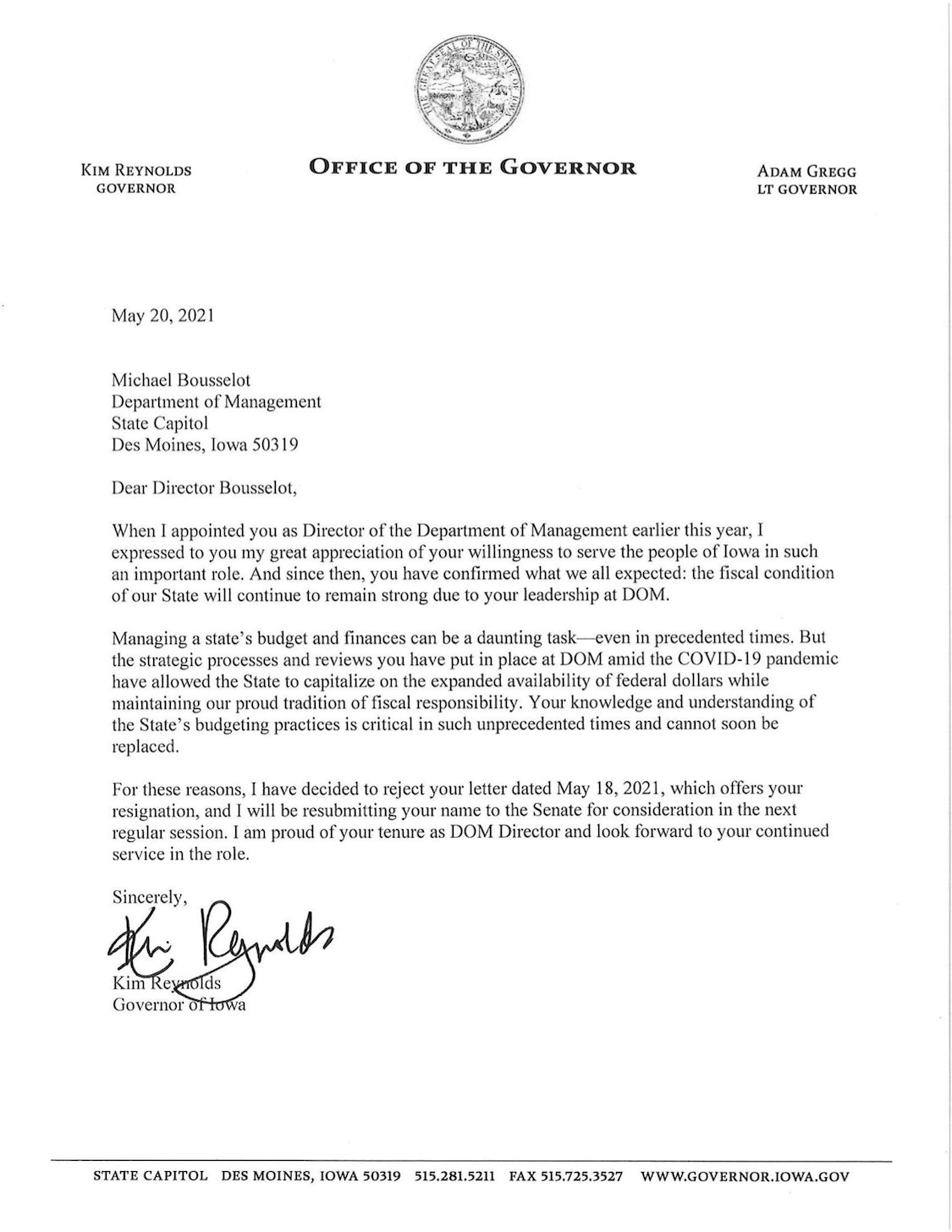 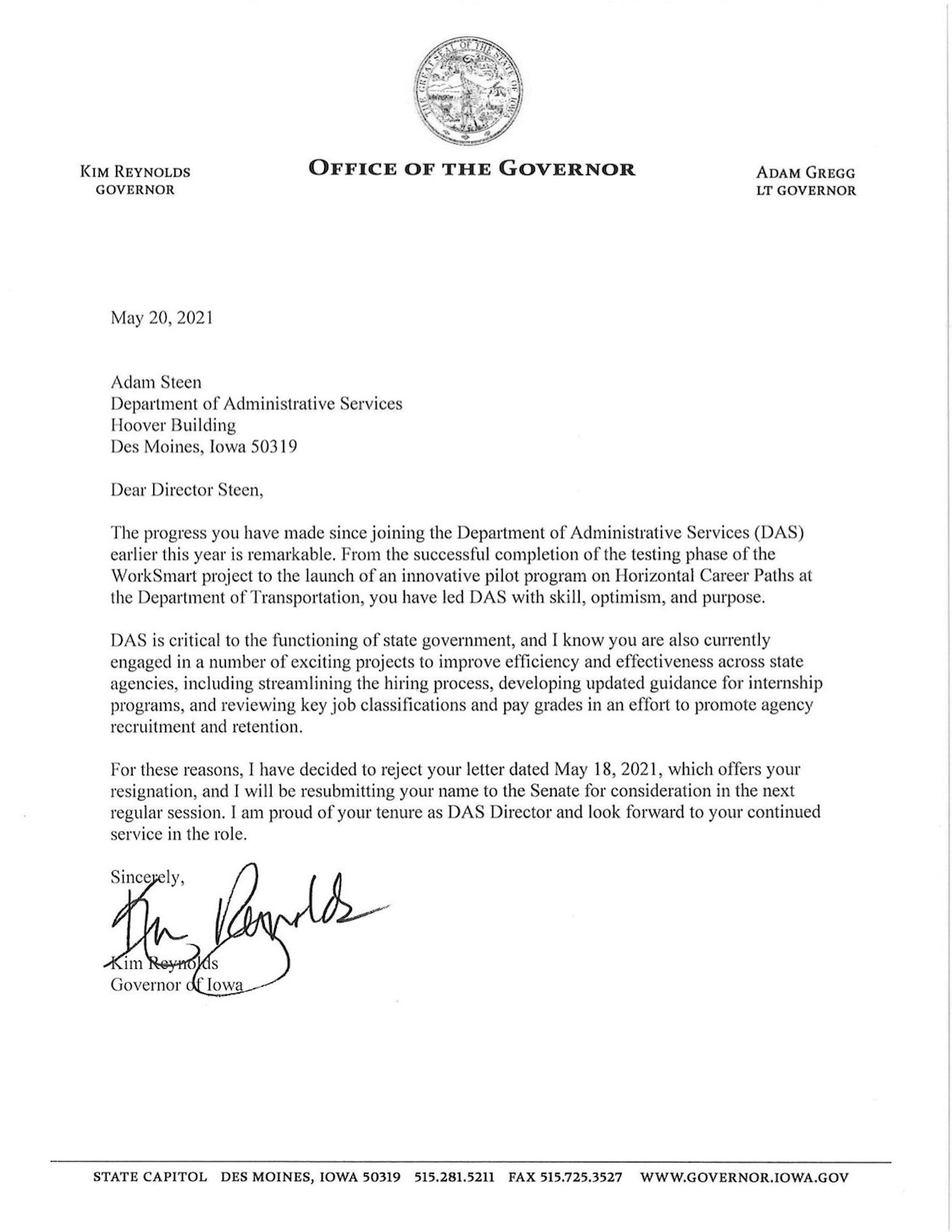