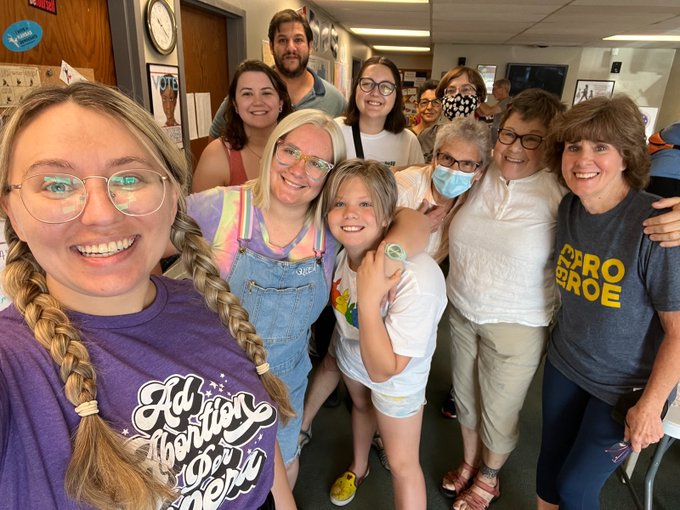 Four takeaways for Iowa from the pro-choice vote in Kansas

In a huge victory for bodily autonomy, Kansas voters on August 2 overwhelmingly rejected a proposed constitutional amendment that would have cleared a path for Republican lawmakers to ban abortion. With about 95 percent of votes counted, the "no" vote (against removing abortion protections from the Kansas constitution) led the "yes" vote by 58.8 percent to 41.2 percent.

Iowa Democrats and Republicans should pay attention to the results.

The abortion issue has potential to drive up turnout.

Republicans know their party's position on abortion is unpopular. That's why they scheduled the vote on the constitutional amendment to coincide with a summer primary election. Turnout is almost always lower for a primary than a general election, and since Kansas has closed primaries, independents cannot cast a ballot for Republican or Democratic candidates.

At least 726,000 Kansans cast a ballot in the Democratic or Republican primaries for governor. But more than 908,000 people voted for or against the constitutional amendment. As David Beard of the Daily Kos Elections team noted, some 20 percent of voters "came out just to vote on the amendment."

Turnout for this primary was on par with some general elections. Reminding voters that abortion rights are on the line can only help Iowa Democrats, who have struggled to match GOP turnout in the last five midterm elections.

Very few pro-choice Republicans hold public office anymore. But in the GOP rank and file, many don't want to give lawmakers a free hand to ban abortion.

Across the board in Kansas, the "no" vote outperformed Joe Biden's share of the vote in the 2020 presidential election. The disparity was more pronounced in counties with college towns, which have a higher percentage of young voters. But it was visible everywhere. CBS News created this graphic:

The "no" vote outperformed benchmarks in almost every county. Take Sedgwick, containing the Wichita area. Donald Trump outpolled Joe Biden here in November 2020 by 54.4 percent to 42.6 percent. But with almost all the votes counted, "no" beat "yes" by a 58-42 margin.

Ellis is a much smaller and more conservative county, with many residents of German Catholic ancestry. Trump won 70.4 percent of the vote there in 2020. But only 58 percent voted for the constitutional amendment.

There's no guarantee that Kansas results would be replicated in Iowa. But a majority of our red-leaning state's residents do support reproductive rights.

The latest Iowa Poll by Selzer & Co for the Des Moines Register and Mediacom found that 60 percent of Iowans think "abortion should be legal in most or all cases," while only 34 percent say "abortion should be illegal in most or all cases." The same survey indicated that 54 percent of Iowans oppose reinstating a 2018 law that would ban almost all abortions after six weeks of pregnancy, while 38 percent favor the idea. Even among Republican respondents, just 67 percent supported that law.

Some voters who favor keeping abortion legal will support GOP candidates for other reasons. But Democrats running for state and federal offices should do everything they can to keep reproductive rights at the center of public discourse about the 2022 campaign. The GOP trifecta will ban abortion if they retain full control of Iowa government, and may attempt a national ban if they win back Congress. Tragedies in Texas, Ohio, Wisconsin, and elsewhere show where that would lead: child rape victims forced to travel to end pregnancies, hospitals delaying essential health care until patients carrying a doomed pregnancy are near death.

Abortion bans are toxic in the suburbs.

Johnson County, Kansas contains much of the Kansas City suburbs. Biden did relatively well there, taking 52.7 percent of the vote to 44.5 percent for Trump. The constitutional amendment went down in flames, with "no" beating "yes" by 68 percent to 32 percent.

I encourage all Iowa Democrats to be "loud and proud" in supporting bodily autonomy, even in areas where that view might be unpopular. For candidates running in suburban districts, the right policy position is especially good politics.

Iowa's third Congressional district has a large concentration of suburban voters in Polk and Dallas counties. If I were U.S. Representative Cindy Axne, I'd be talking about protecting Americans' right to make their own health care decisions every day from now to November.

Axne's challenger, State Senator Zach Nunn, already voted for an abortion ban with few exceptions, which would kick in before many Iowans even realized they were pregnant. During a debate before this year's GOP primary, Nunn raised his hand when the moderator asked the candidates whether they think abortion should always be illegal, with no exceptions. Instead of running tv ads about Adventureland amusement park, Axne should make sure every IA-03 voter sees Nunn taking that position.

Republicans may think twice about trying to amend Iowa's constitution.

The Kansas ballot language was worded in a convoluted way, in an obvious attempt to push people to vote yes. For weeks, the "yes" faction lied to Kansans about what passing the amendment would mean. On August 1, some unknown group paid for misleading texts, telling thousands of Kansans, "Voting YES on the Amendment will give women a choice. Vote YES to protect women's health."

In reality, a yes vote would have erased the Kansas Supreme Court's 2019 decision protecting abortion rights, giving Republican politicians free rein to take all bodily autonomy away from pregnant Kansans.

Now that Kansas voters have comprehensively rejected the amendment, despite the dirty tricks, Iowa Republicans may want to reconsider trying to add abortion language to our state's constitution.

Like their Kansas counterparts, Iowa GOP lawmakers have tried to obscure their goals. Before moving their proposed constitutional amendment through both chambers of the legislature in 2021, legislators revised the text to create the impression that the measure is needed to "protect unborn children from efforts to expand abortion even to the point of birth."

If Republicans maintain control of the Iowa House and Senate this November, they could pass the amendment again, forcing a statewide vote on adding the language to the constitution in 2023 or 2024.

But would they want to roll the dice on that? Last month's Iowa Poll indicated that just 31 percent of Iowans favor "amending the Iowa Constitution to say it does not recognize a right to abortion or require public funding of abortion," while 56 percent (including 40 percent of GOP respondents) opposed such an amendment.

Iowa's Supreme Court overturned its own abortion rights precedent this summer. So a constitutional amendment is no longer needed to accomplish that goal. If Republicans put the question to Iowans and they vote an amendment down, the Iowa Supreme Court may conclude that the the people have spoken, and recognize that the state constitution guarantees some right to bodily autonomy.

UPDATE: I forgot to mention that Trump carried Kansas in 2020 with about 56.2 percent of the vote, to 41.5 percent for Biden. Iowans favored Trump over Biden by 53.1 percent to 44.9 percent.