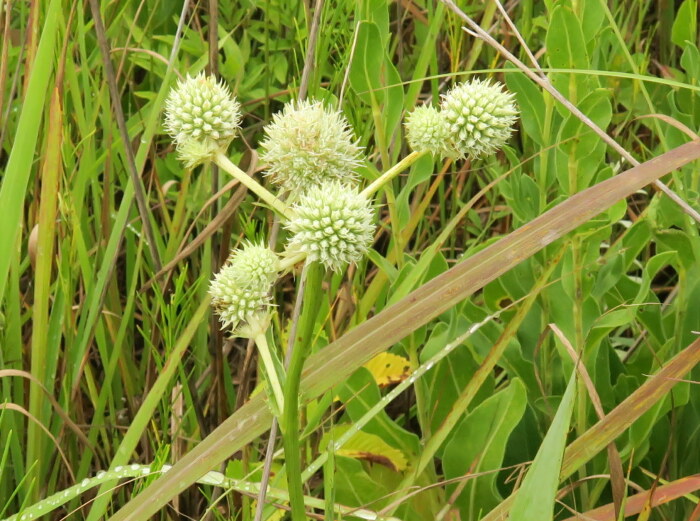 Learning to identify some native plants can be challenging even for experts. But today's featured species is, in the words of the Minnesota Wildflowers website, "a no-brainer," since rattlesnake master (Eryngium yuccifolium) is "a unique plant" and "startlingly different than most native plant forms."

I've mostly seen rattlesnake master in prairie plantings, but according to Illinois Wildflowers, it's "easy to grow" in sunny areas and "isn't bothered by foliar disease nor many insect pests." The species is native to about two dozen states east of the Rocky Mountains.

It's typically easier to distinguish wildflower species from one another by their blossoms. In contrast, rattlesnake master leaves are a dead giveaway long before flowers appear. Eric Ulaszek and Christopher David Benda wrote on the U.S. Forest Service's website,

The leaves of rattlesnake master have parallel veins—one of relatively few dicotyledonous plants that has parallel-veined leaves—most have net-veined leaves (think about the leaves of oak trees, sunflowers, or cabbages!). These unusual leaves, with their linear shape, odd venation, and slender filiform teeth along the margins, are reminiscent of the Spanish-dagger or yucca plant (Yucca spp.); this inspired the plant’s specific epithet, ‘yuccifolium’ which means “yucca-like leaves”.

The Lady Bird Johnson Wildflower Center website notes that these leaves are "unpalatable to grazing livestock." 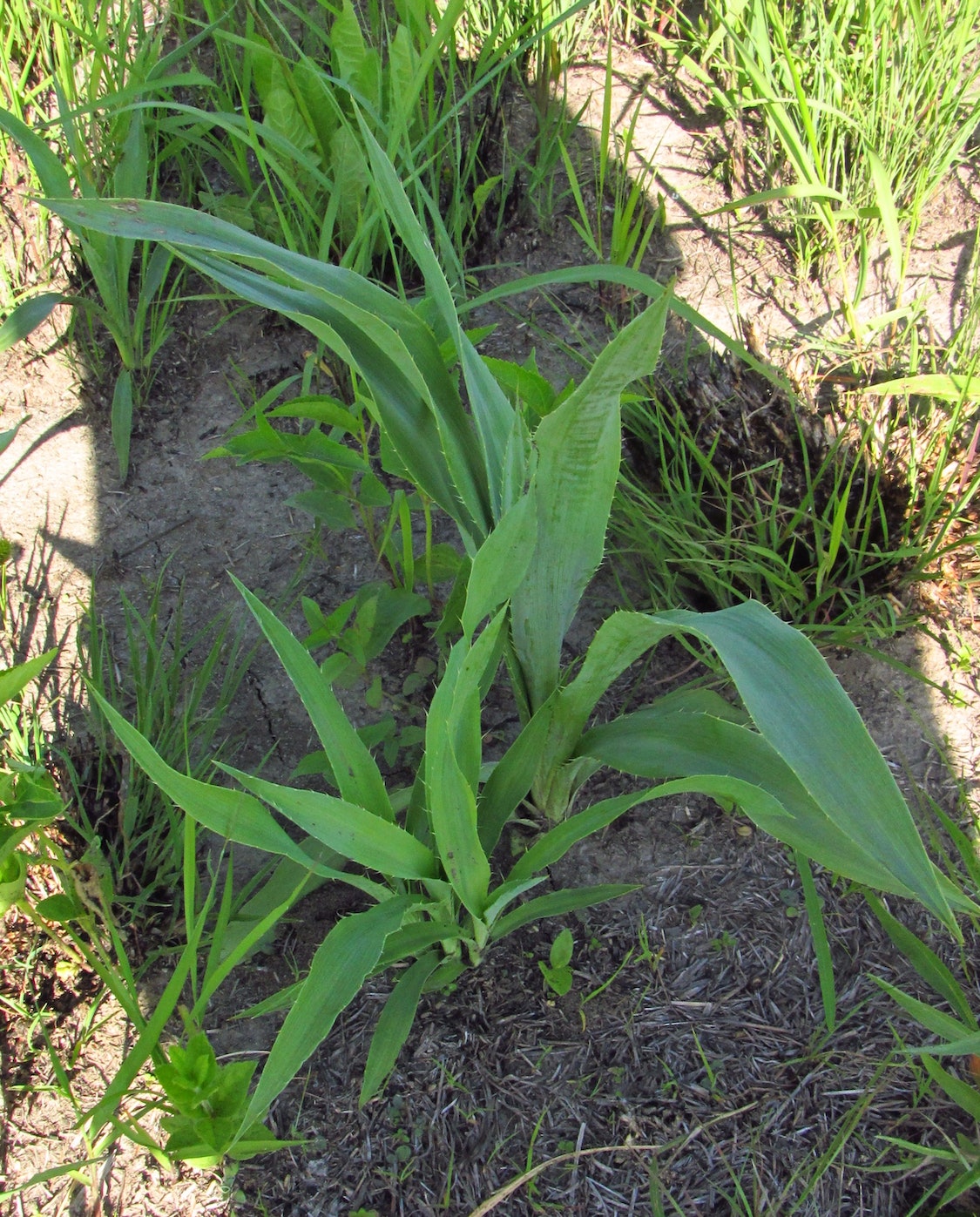 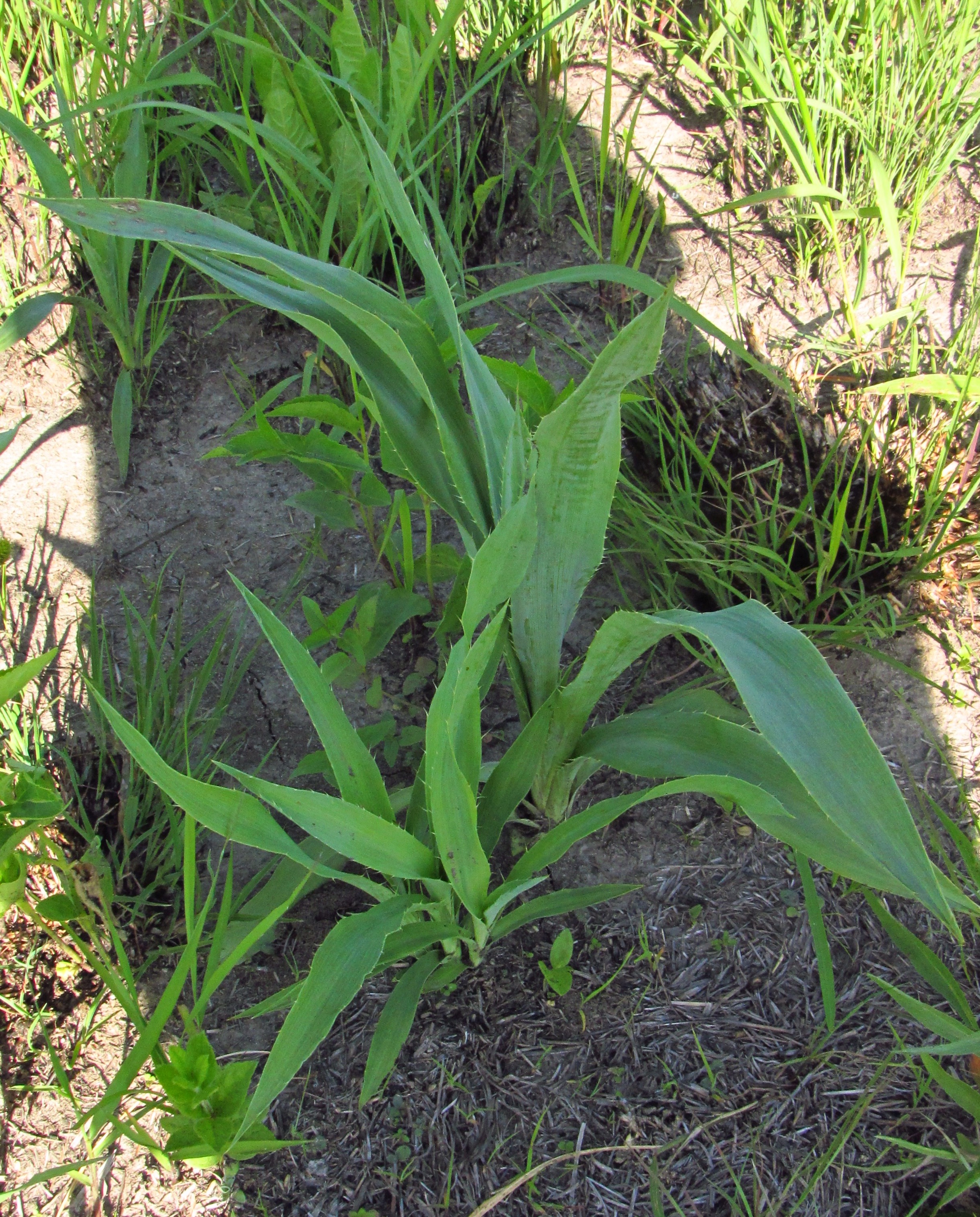 You can't miss the "whitish green globe-like flowerheads" when they start to appear in early summer: 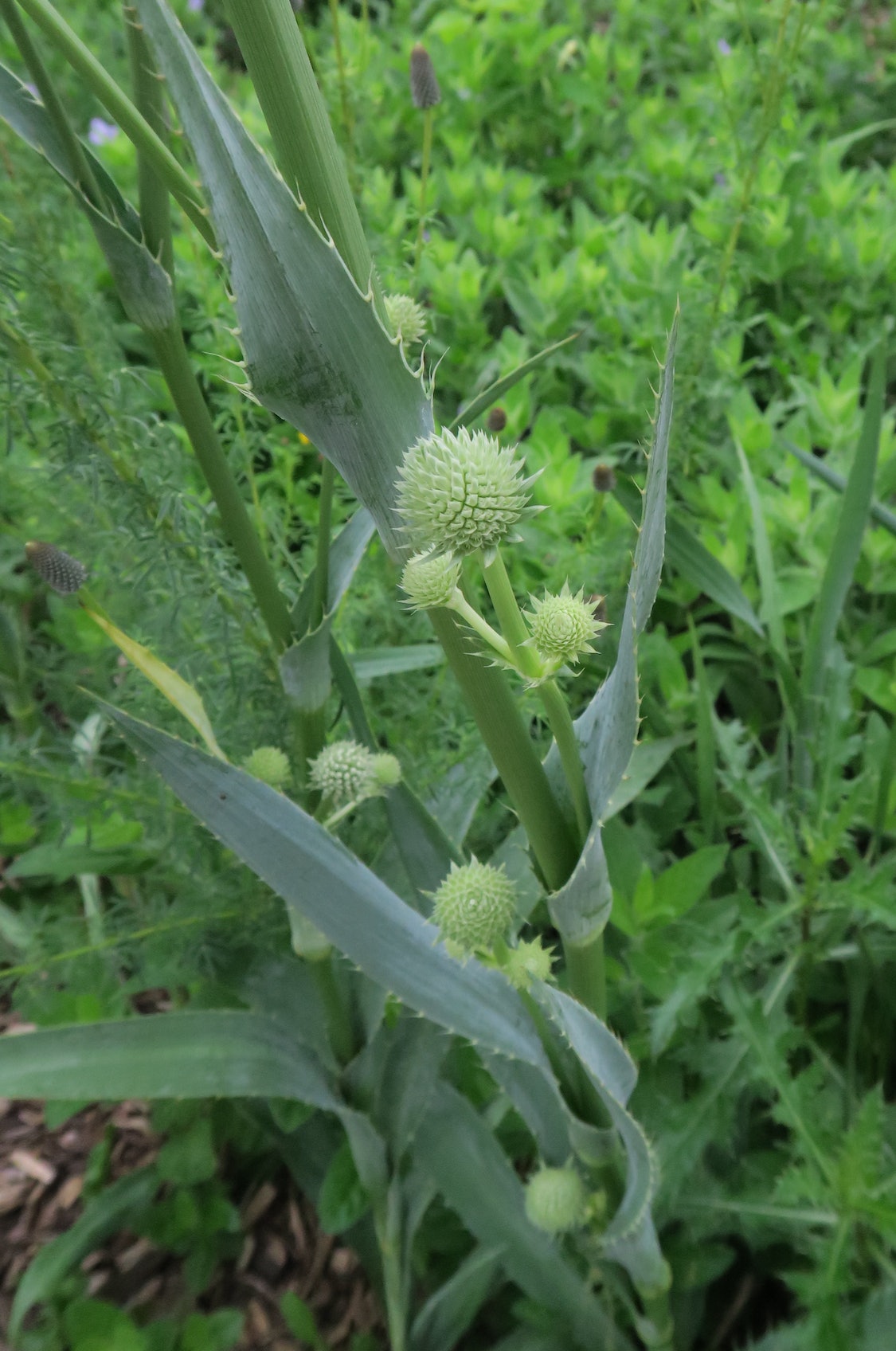 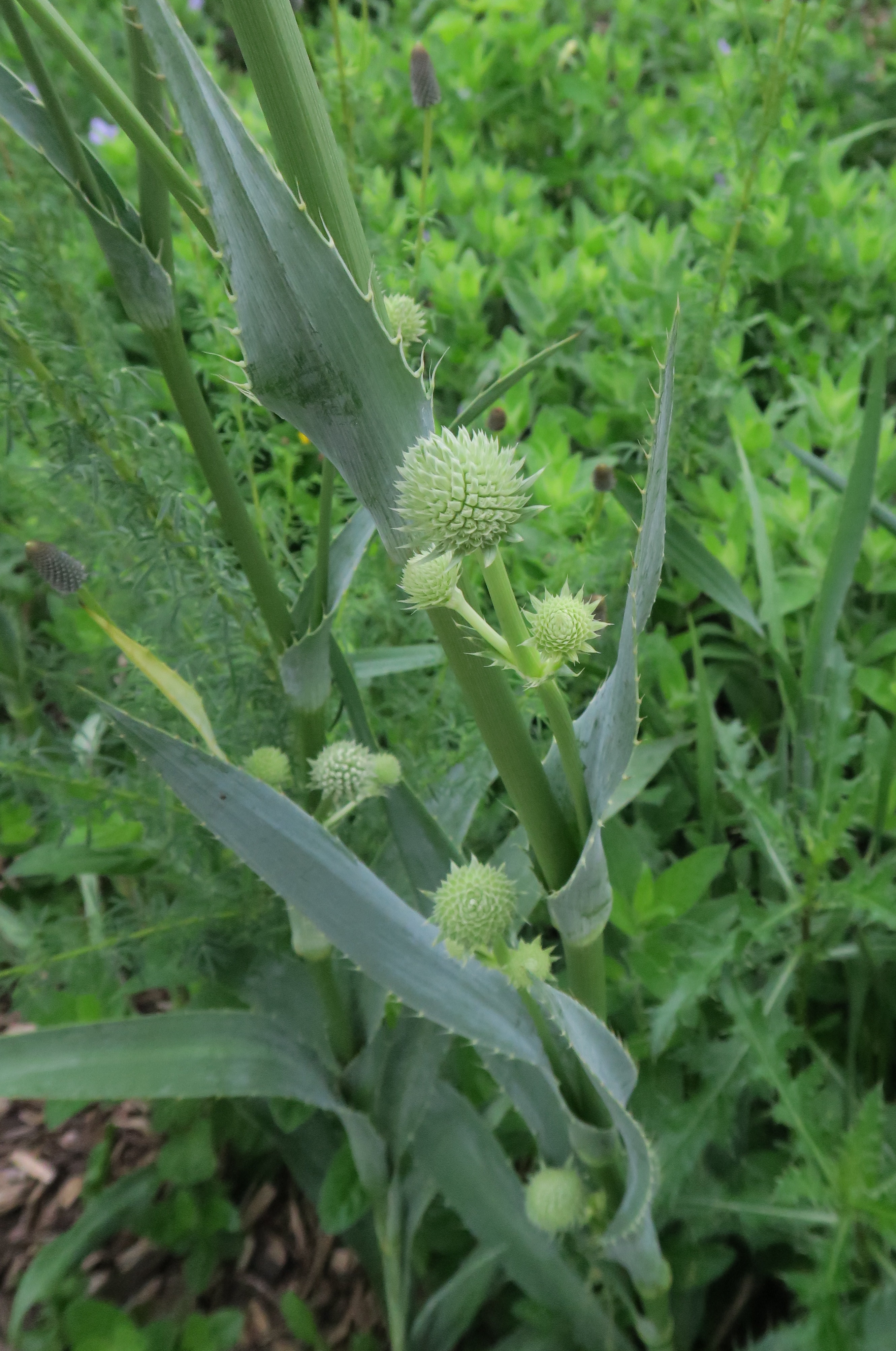 The flowerheads "contain numerous small white flowers that are individually surrounded by prickly bracts. A flower consists of 5 white petals, a divided white pistil, and several white stamens with light brown anthers." I don't have the camera skills to capture a close view of the flower parts, but you get the idea in the next several photos. 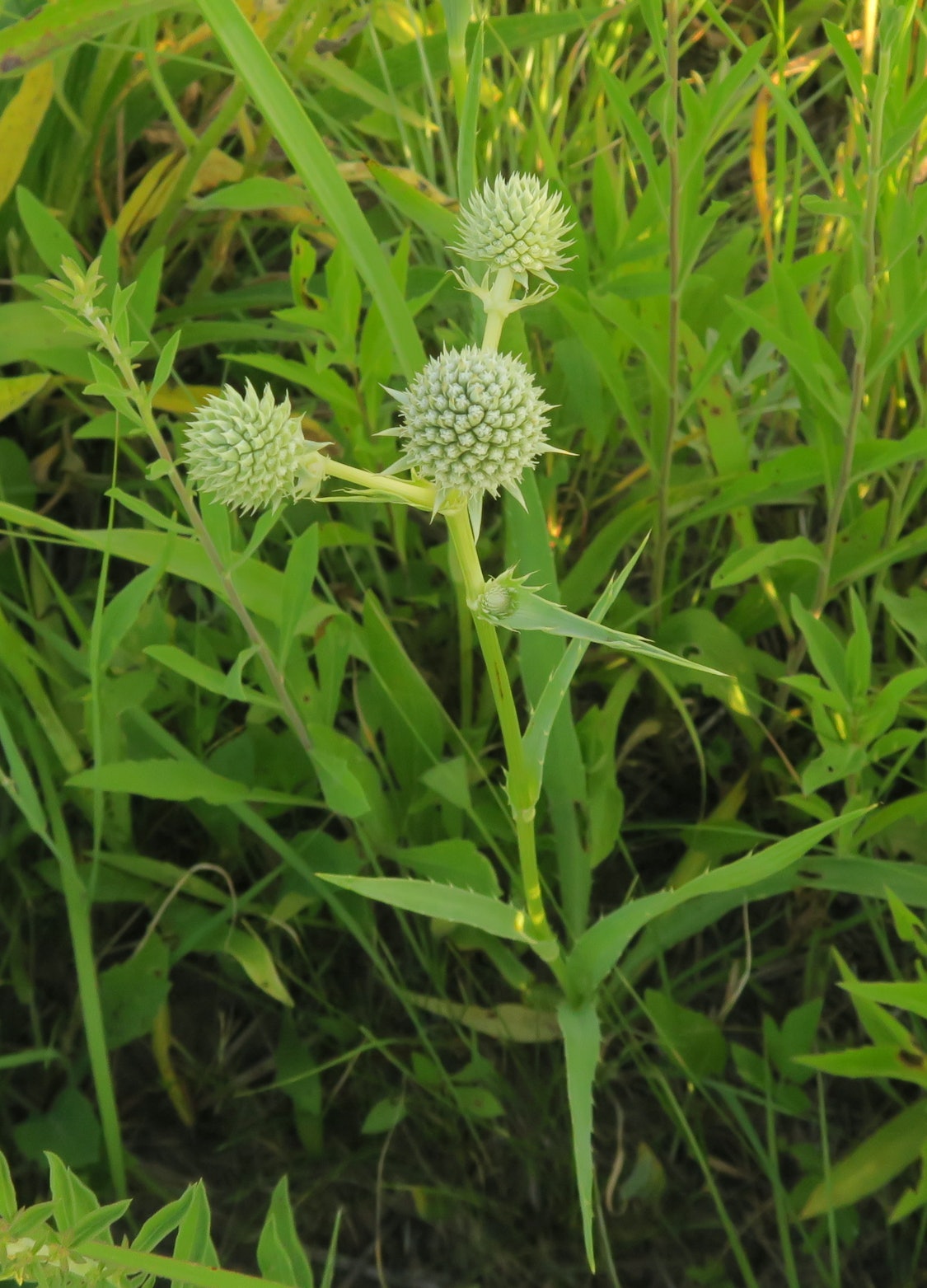 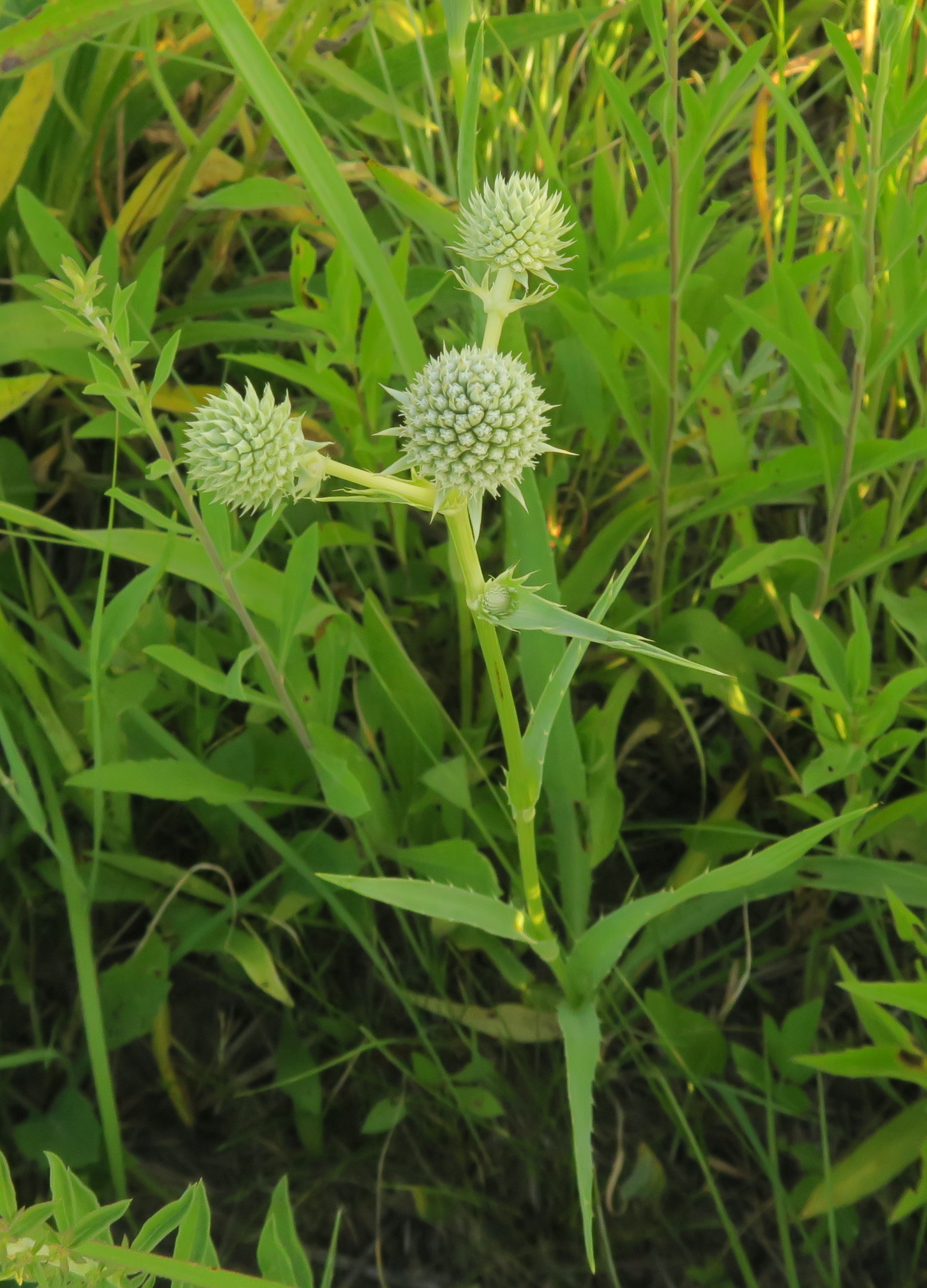 Some rattlesnake master plants have many flowerheads. 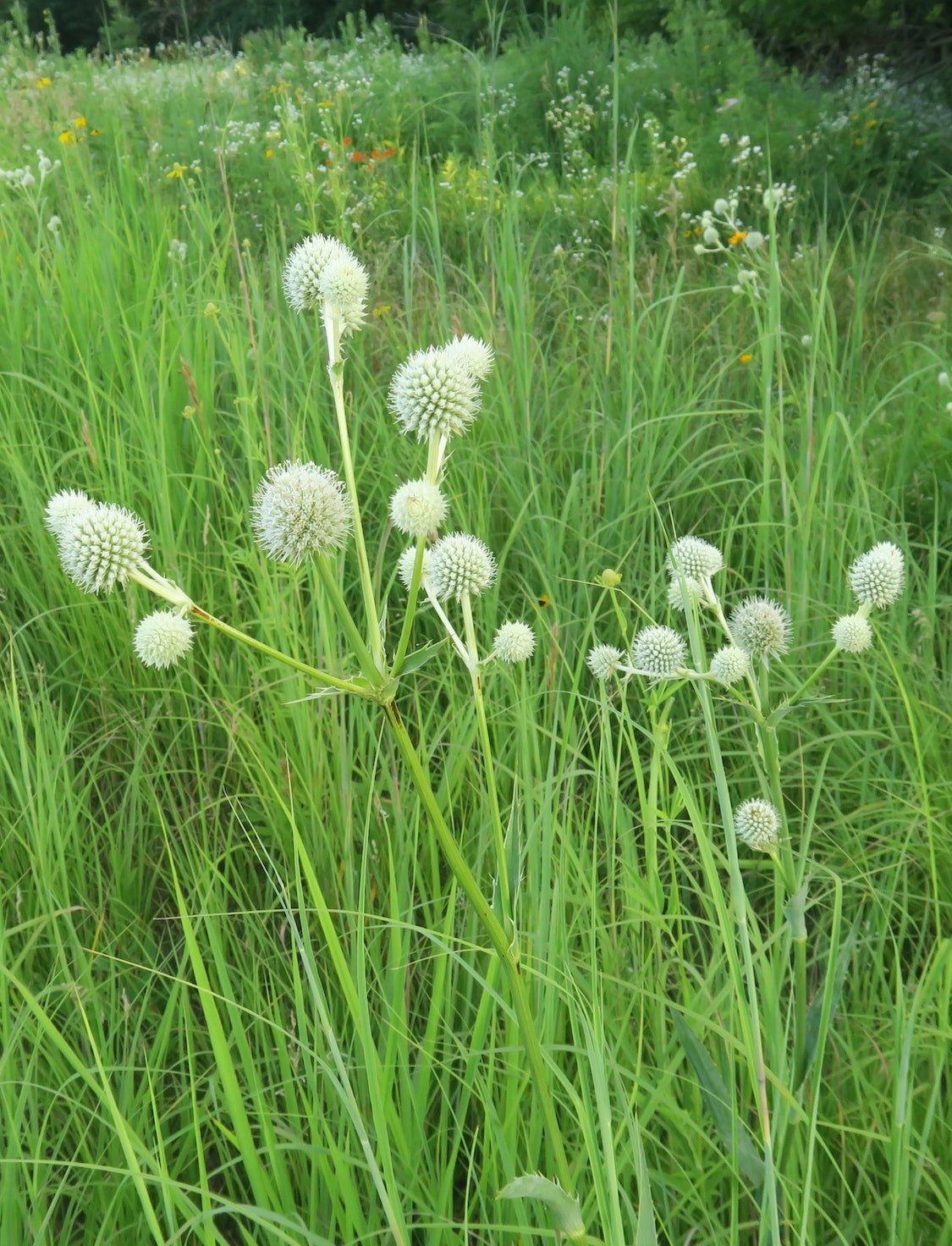 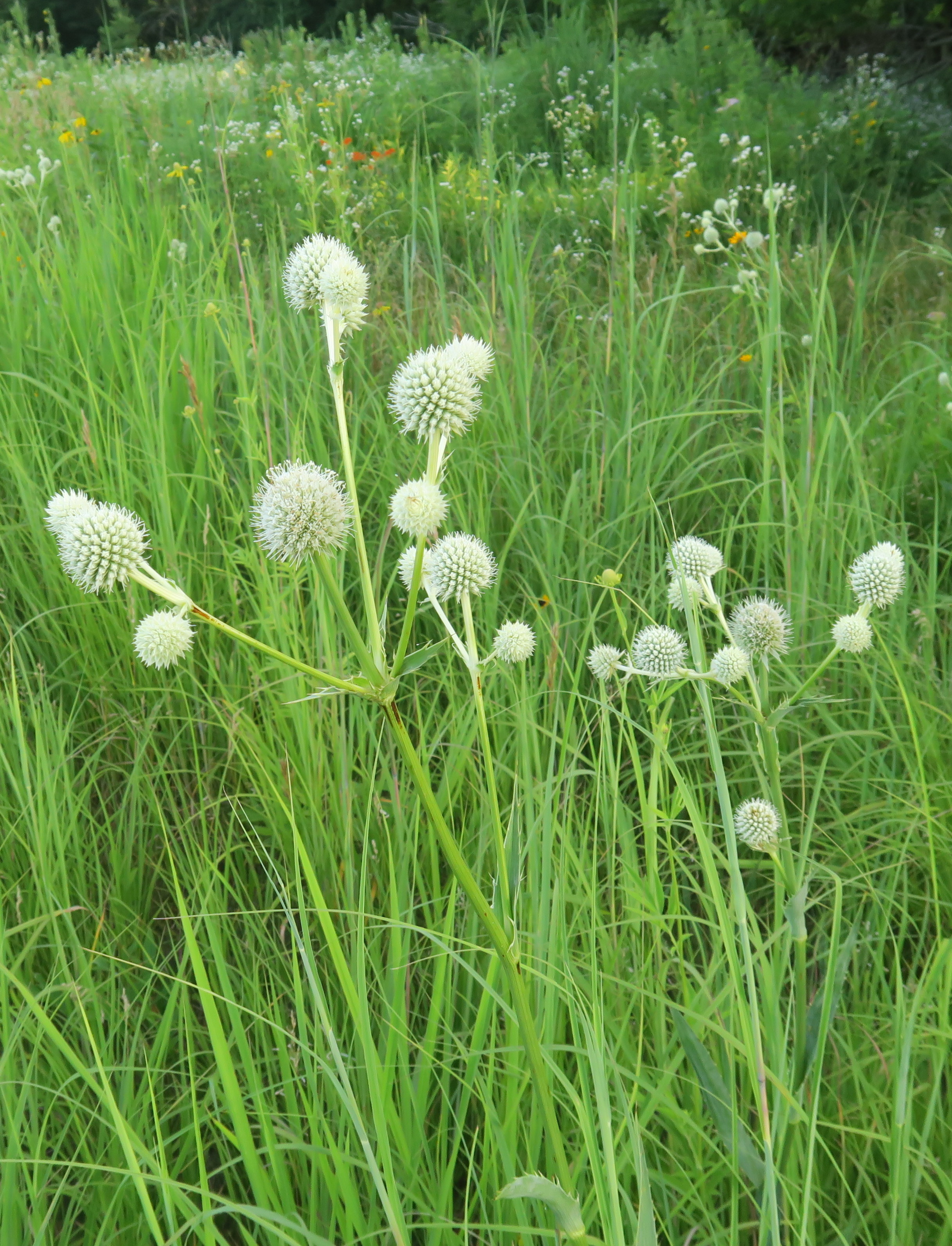 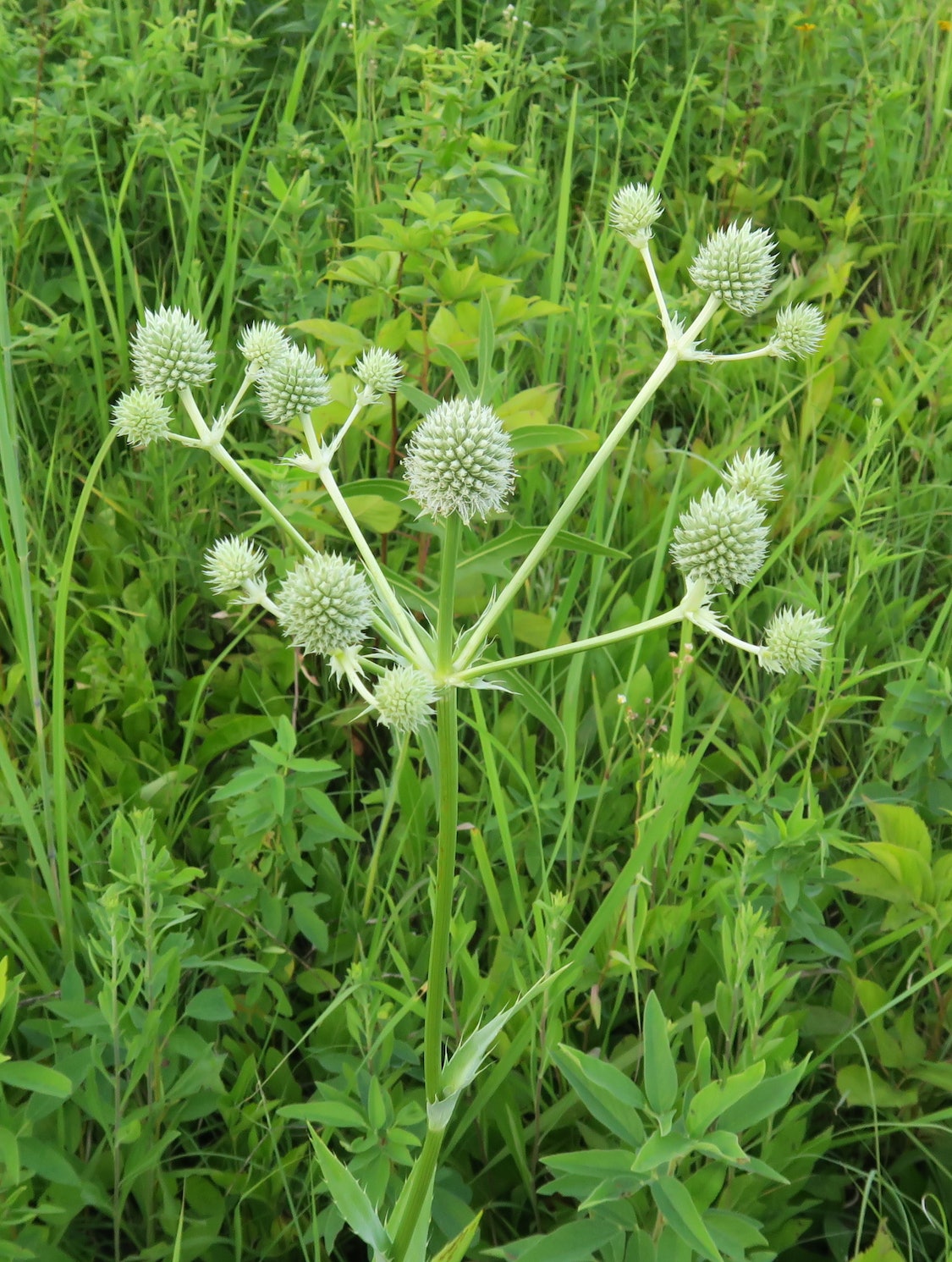 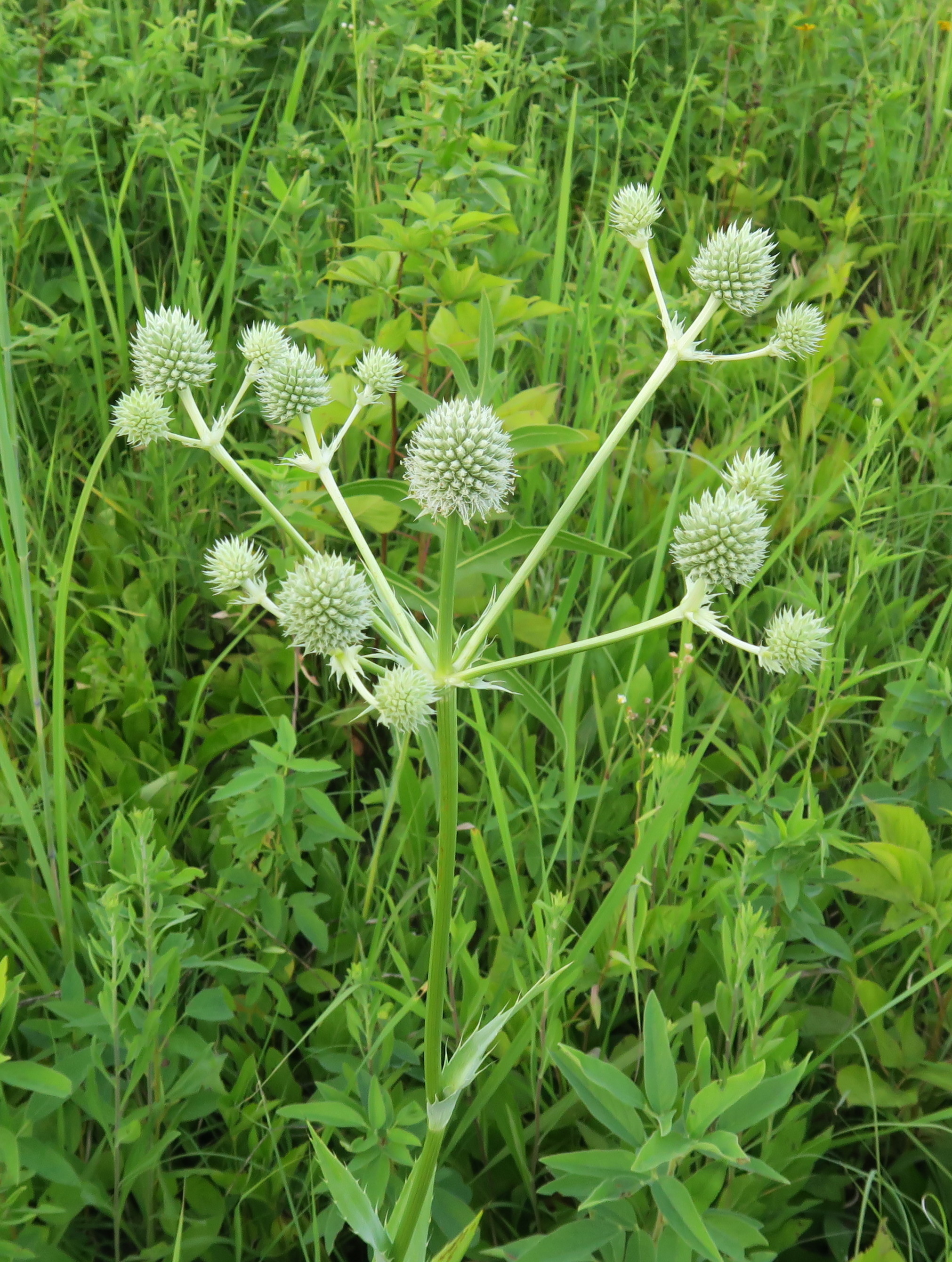 Colonies of rattlesnake master aren't densely packed; the plants will be interspersed with other grasses or forbs. 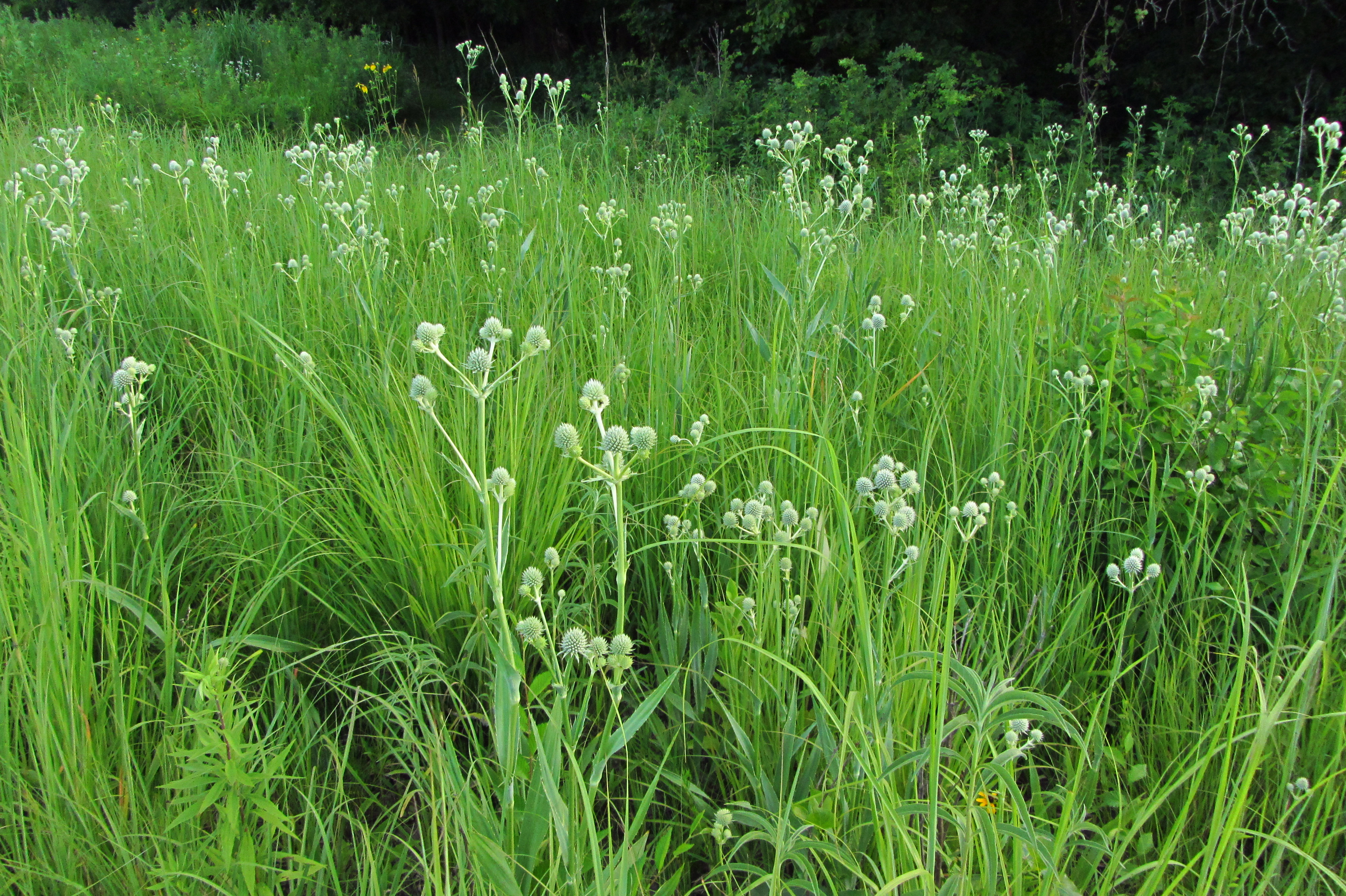 In native or restored prairies, I've seen rattlesnake master thriving alongside many other plants. The next several photos represent a small sampling. With black-eyed Susan: 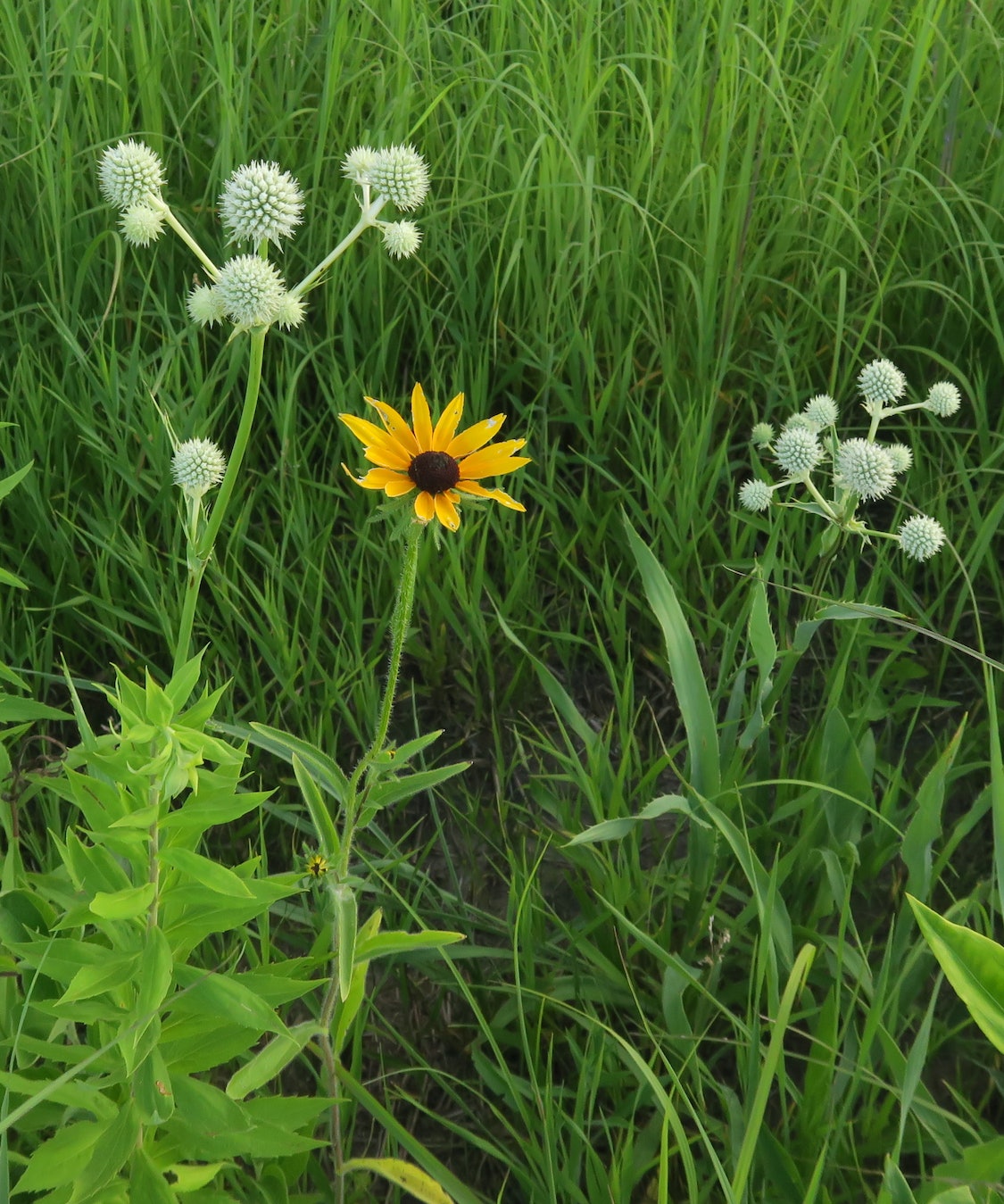 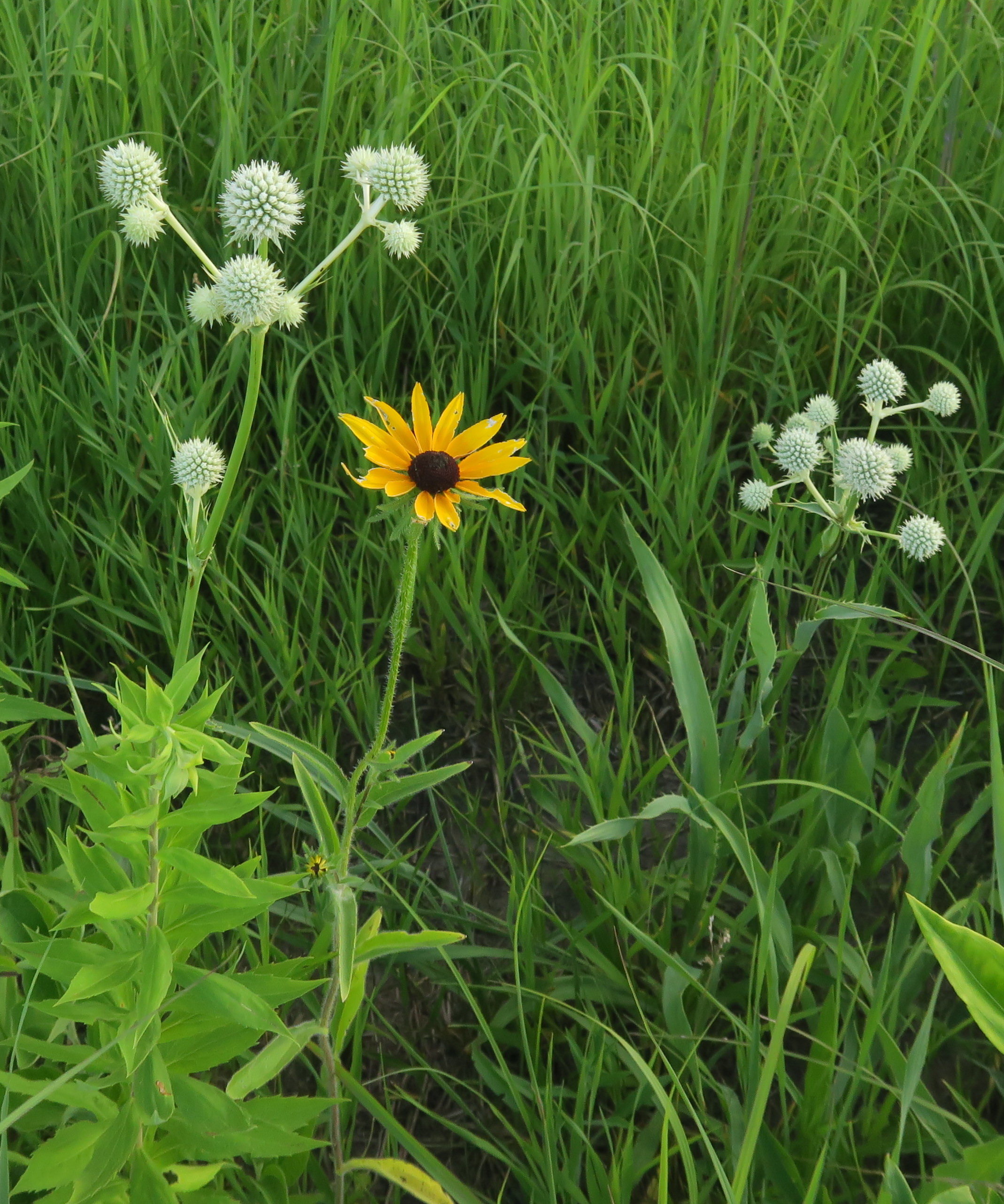 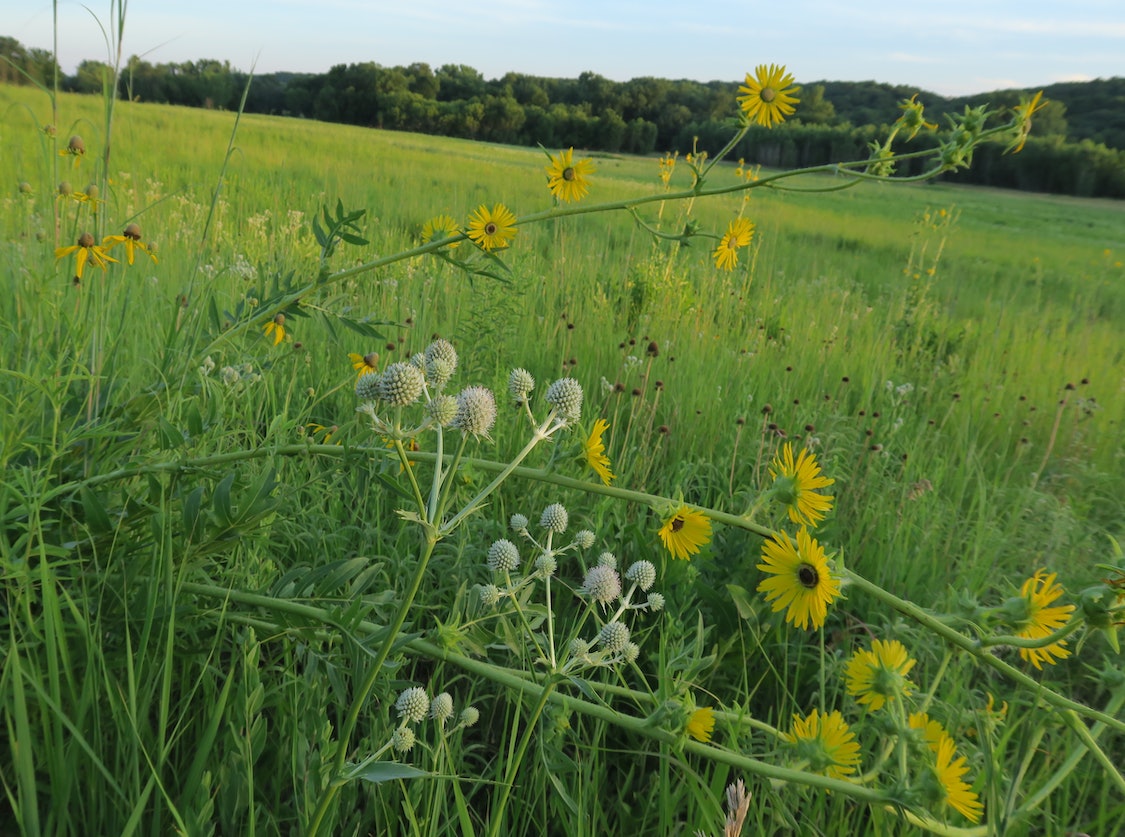 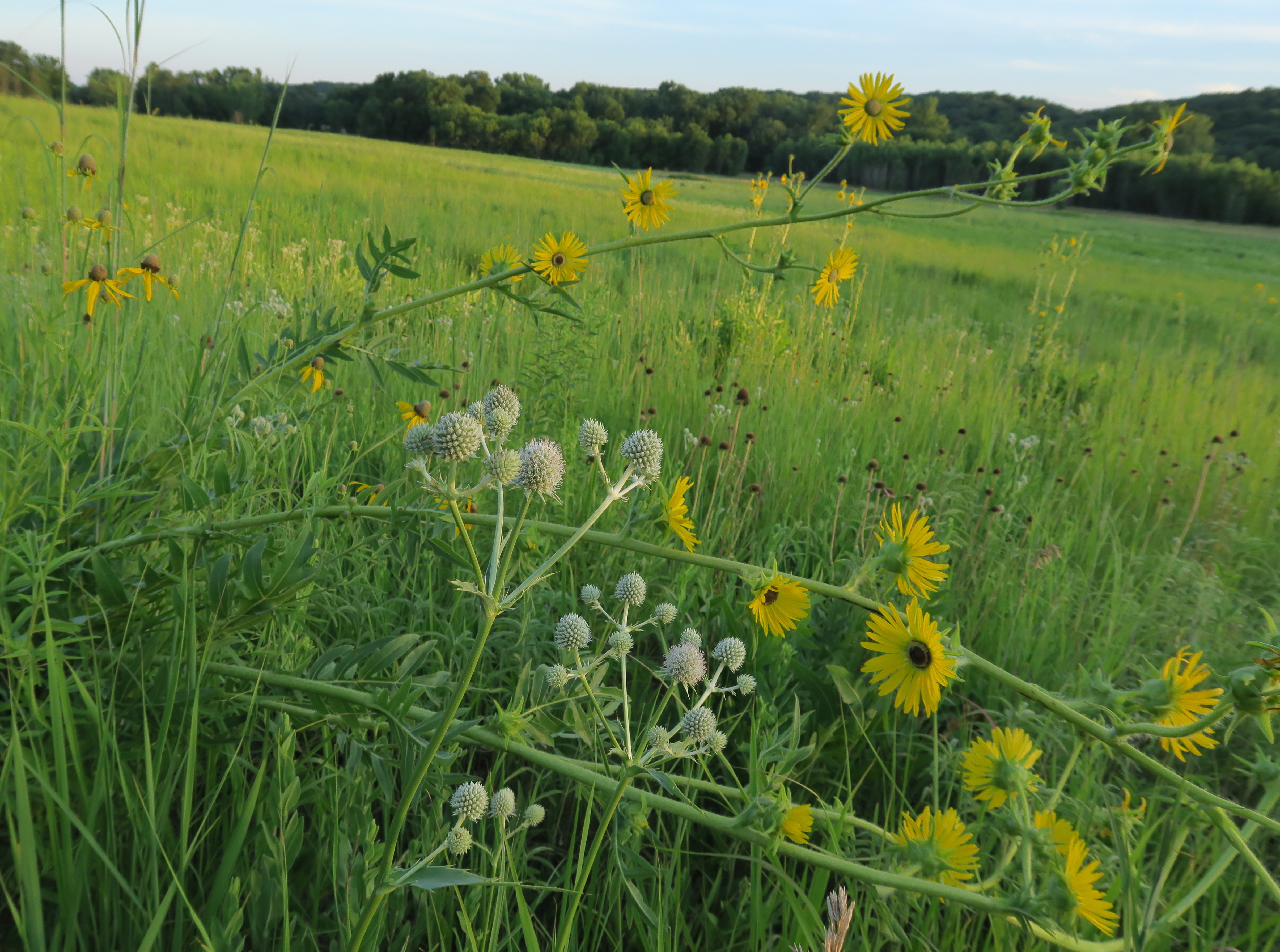 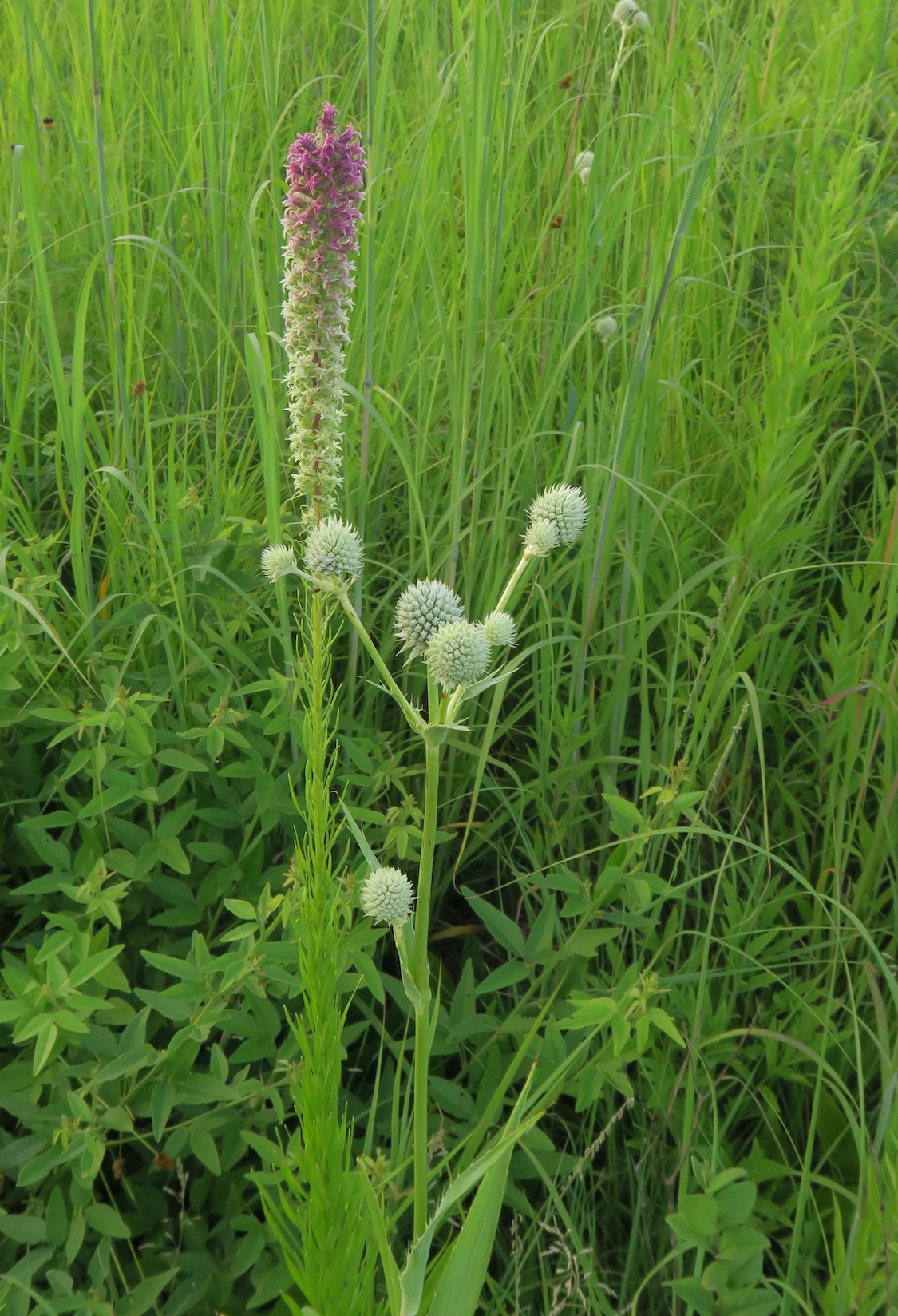 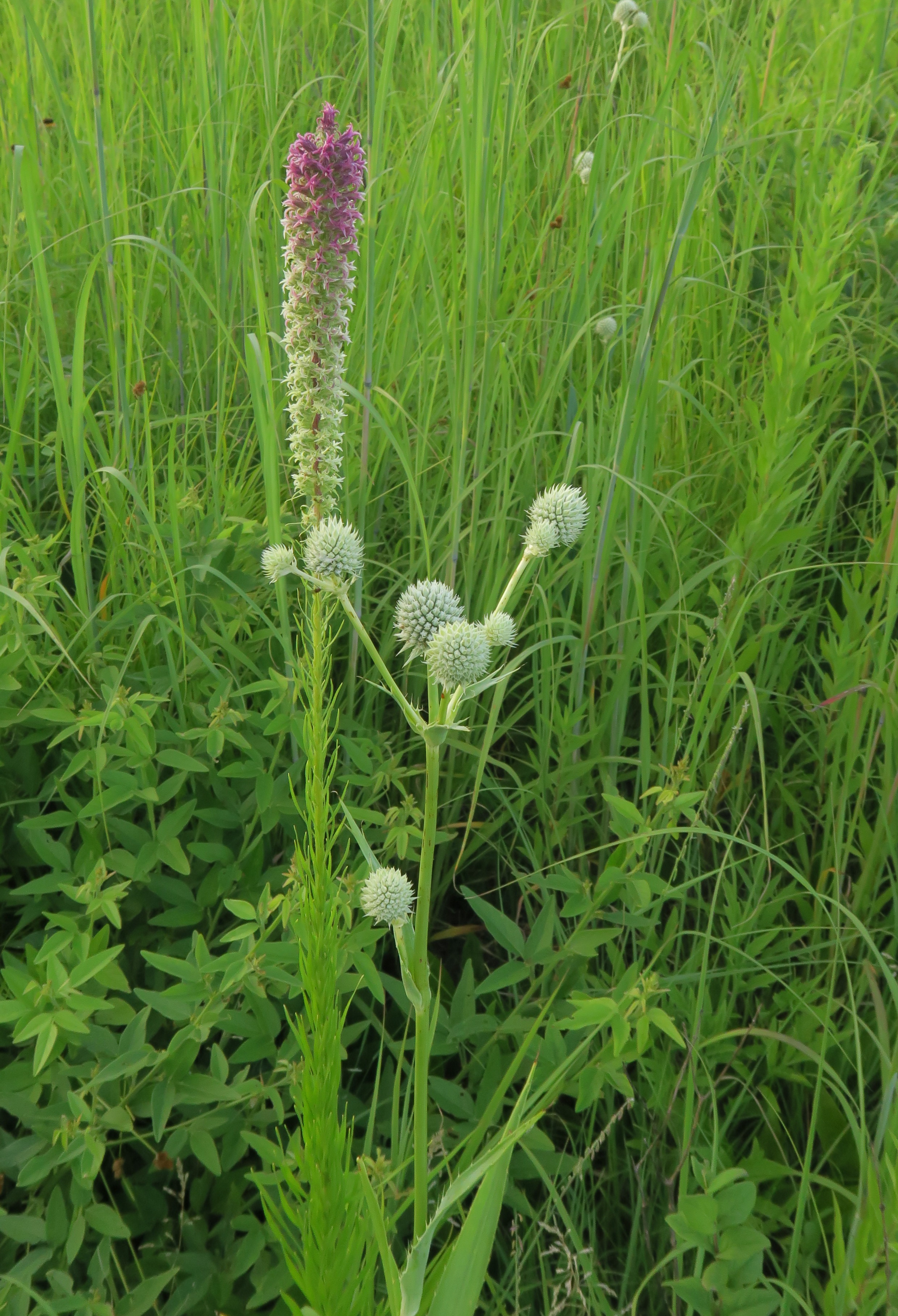 The tallest plants in the foreground here are big bluestem. The dark brown circles are what remains of pale purple coneflower, near the end of the blooming period. 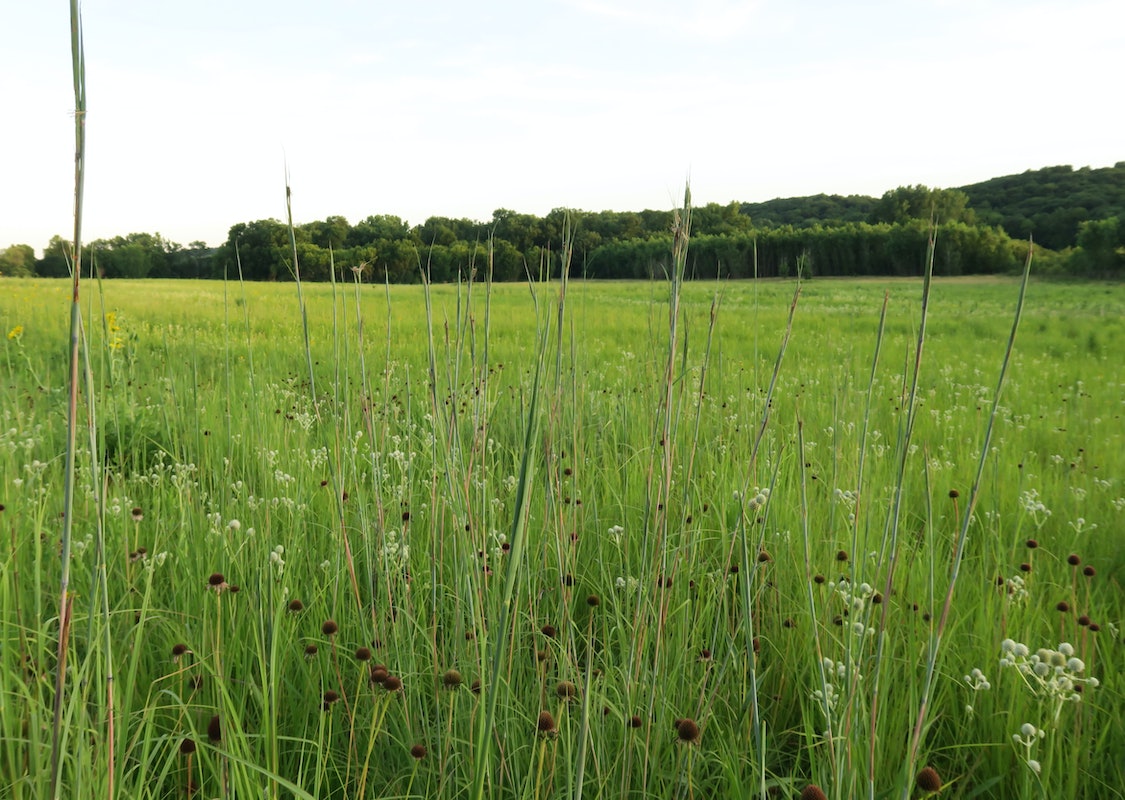 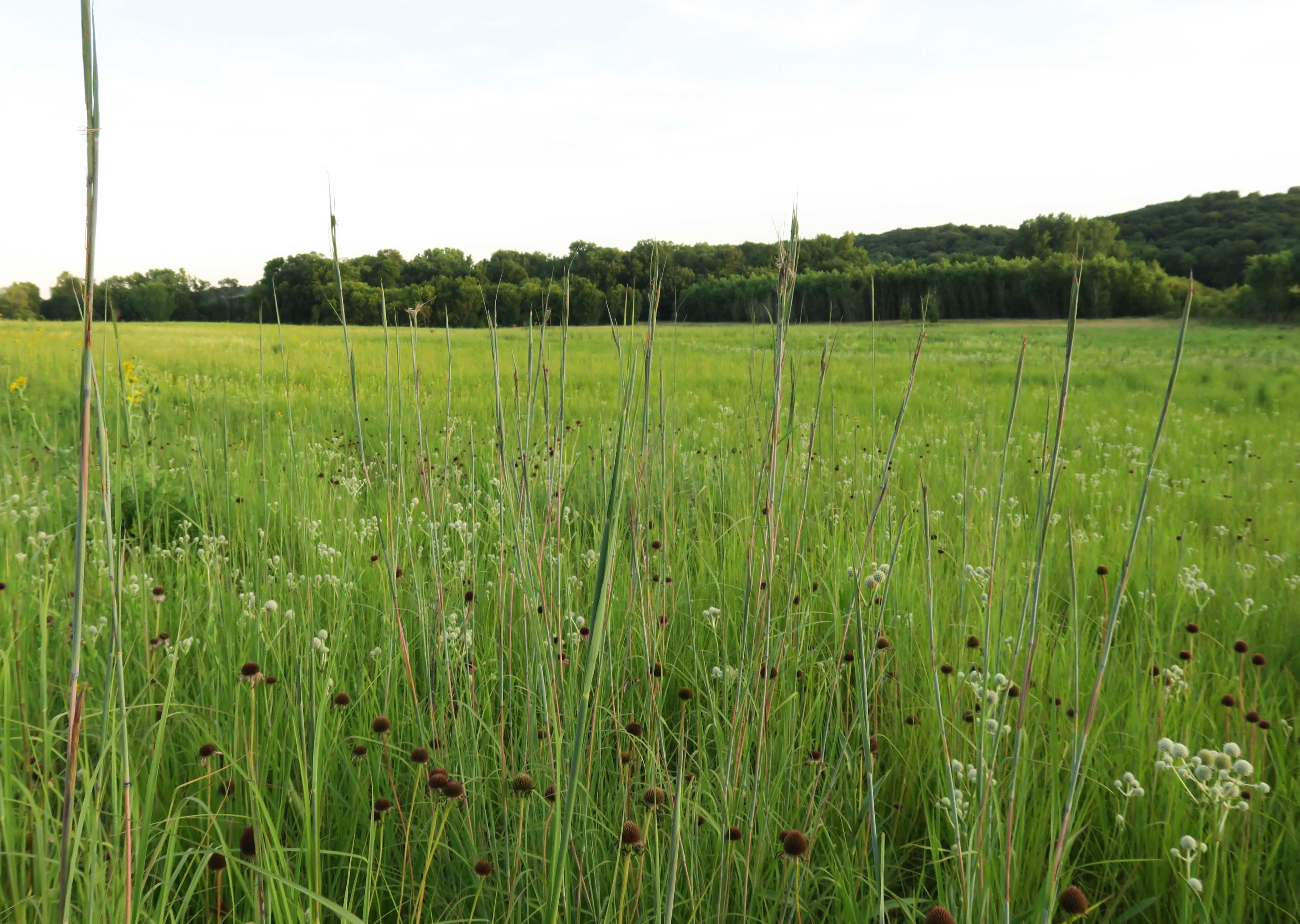 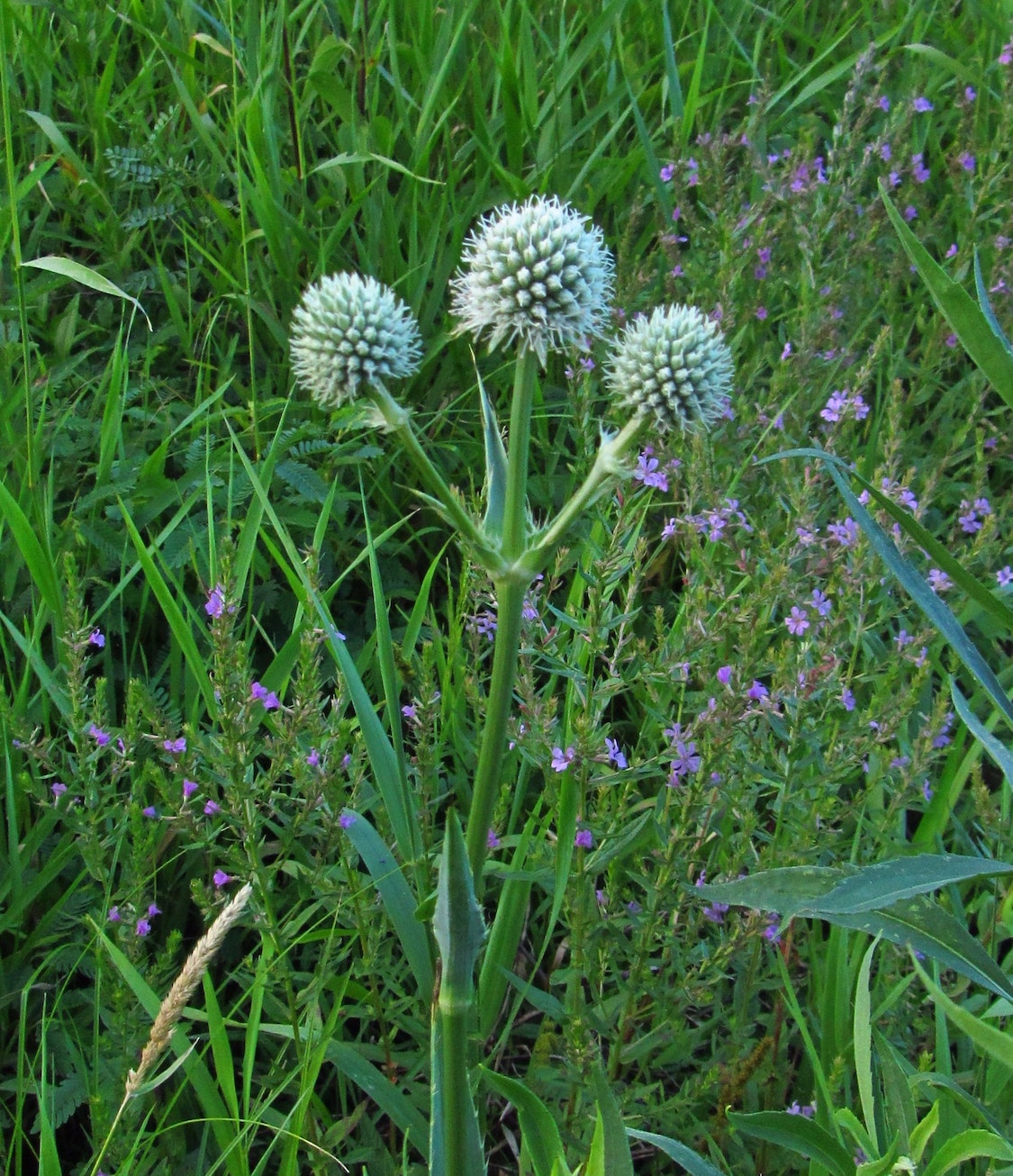 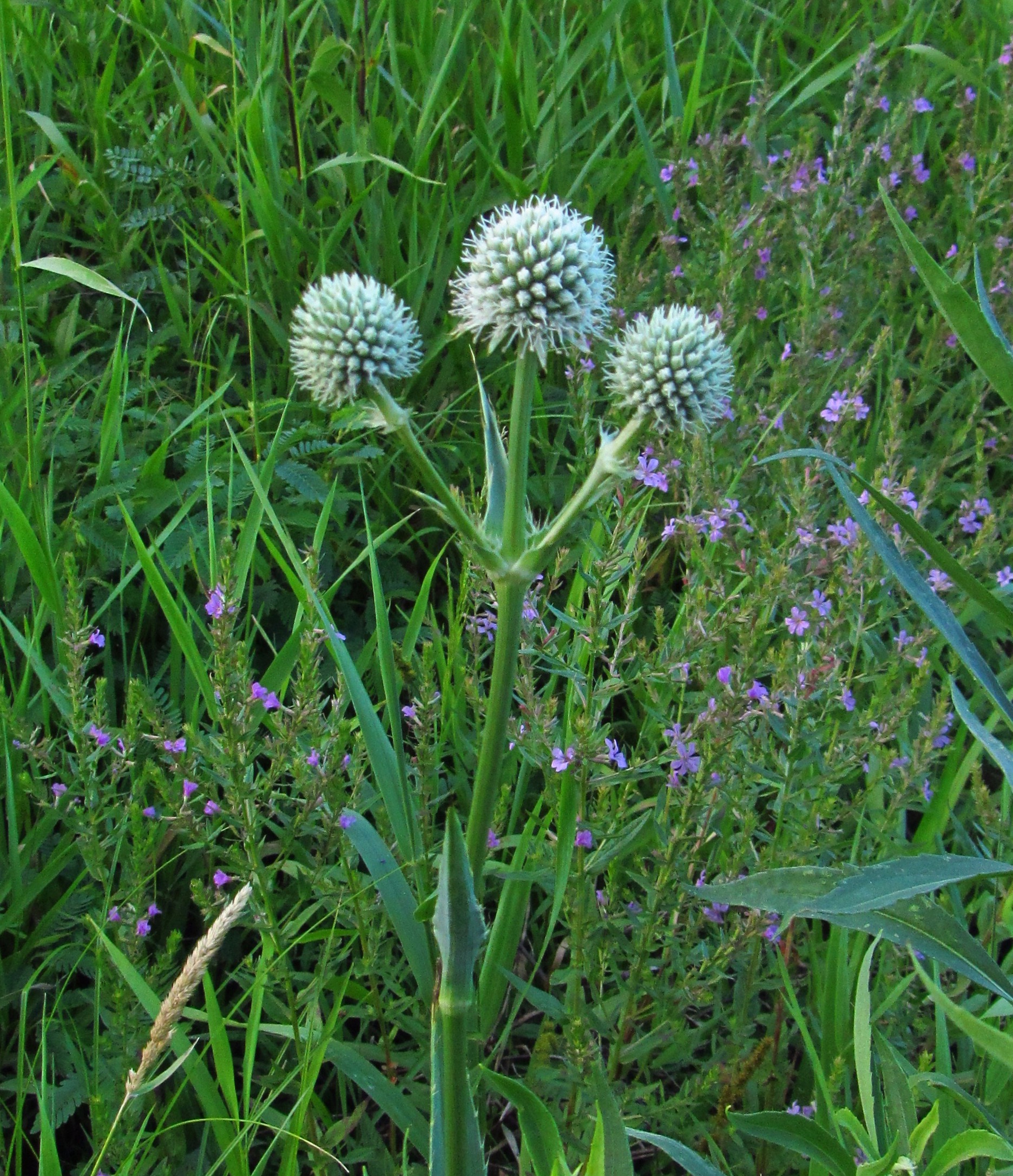 Illinois Wildflowers writes, "The flowering heads attract many kinds of insects, including long-tongued bees, short-tongued bees, wasps, flies, butterflies, skippers, moths, beetles, and plant bugs. These insects usually seek nectar, although some of the bees may collect pollen for their brood nests."

I have no idea which insect is sampling here. 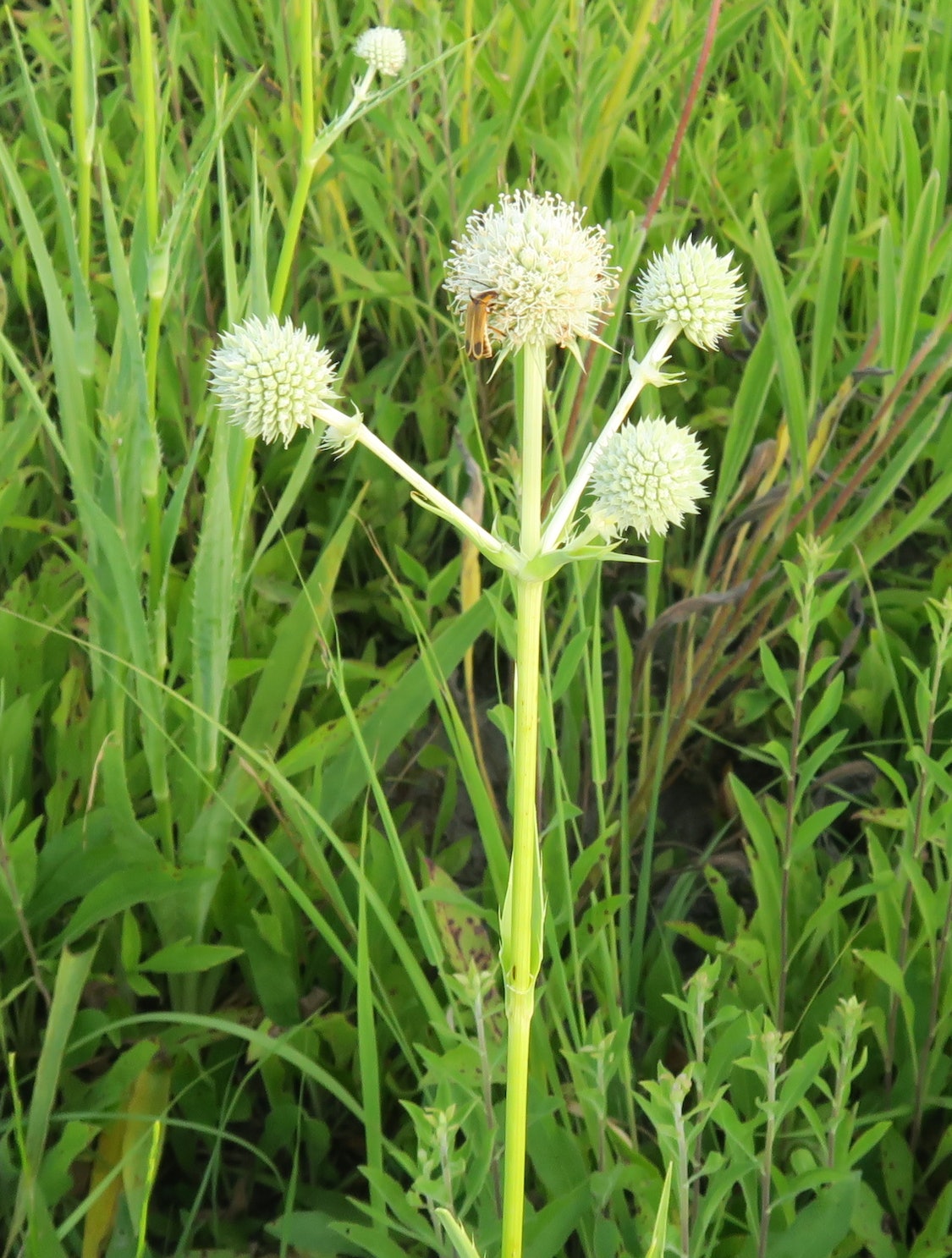 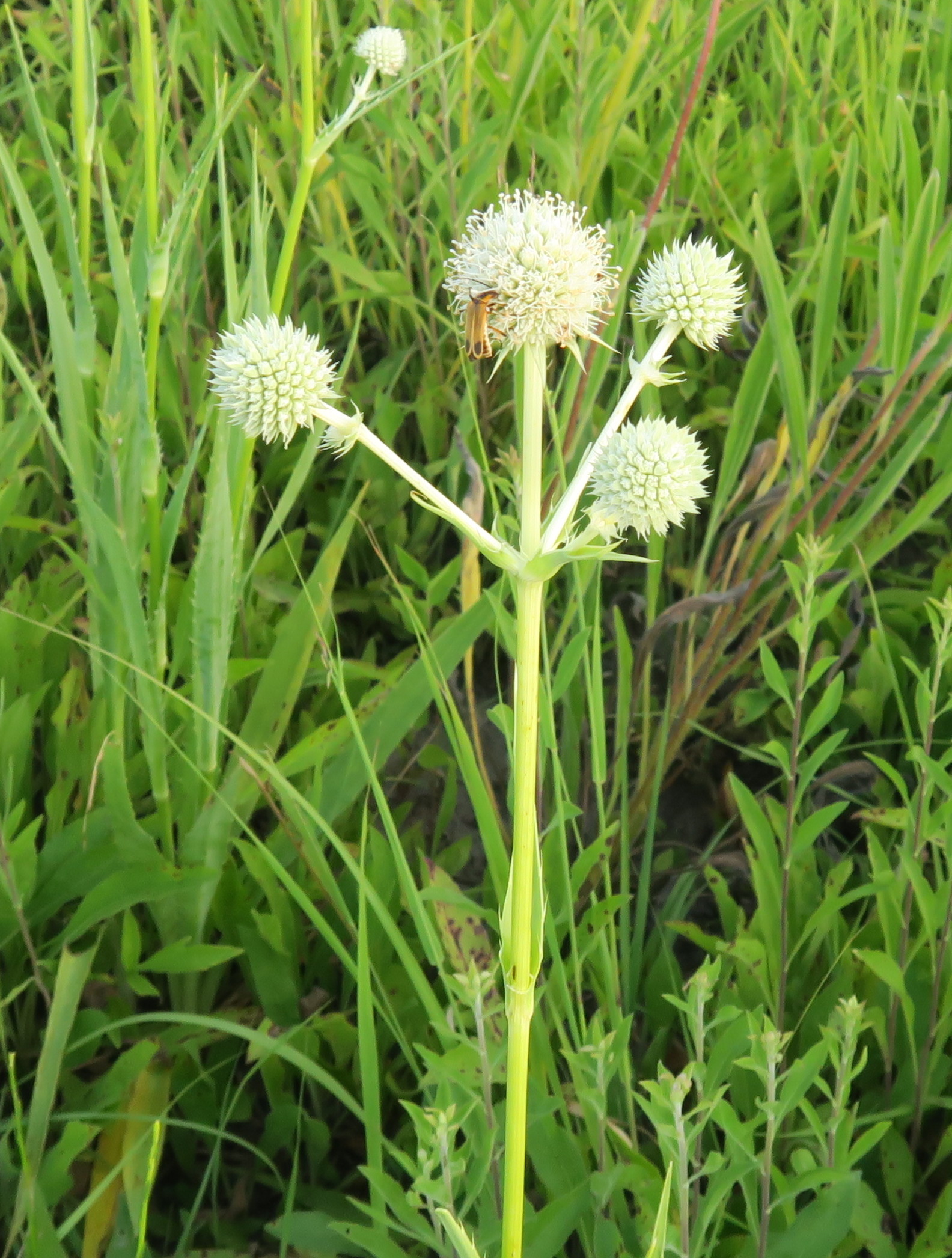 I took this picture last September of a plant after the blooming period: 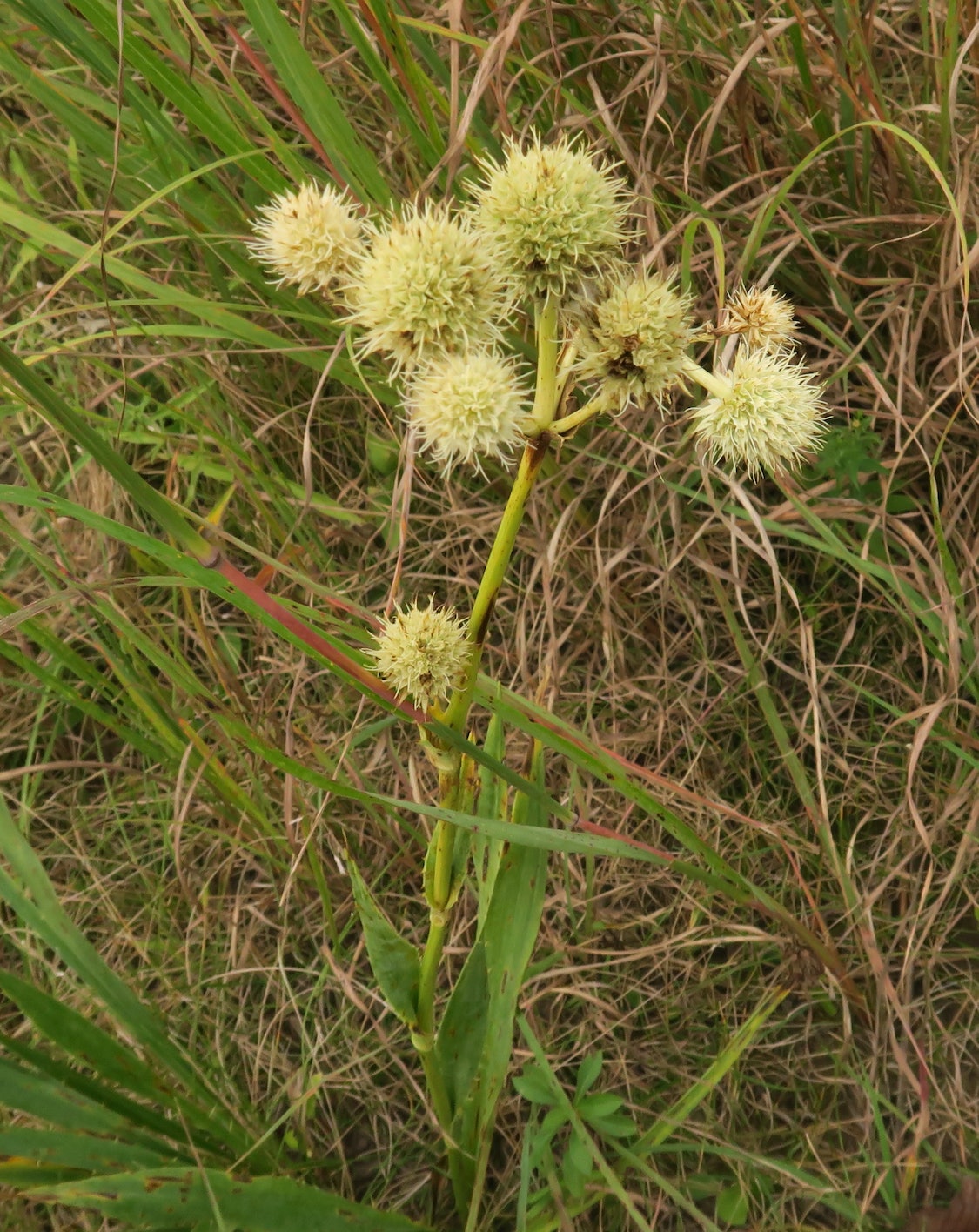 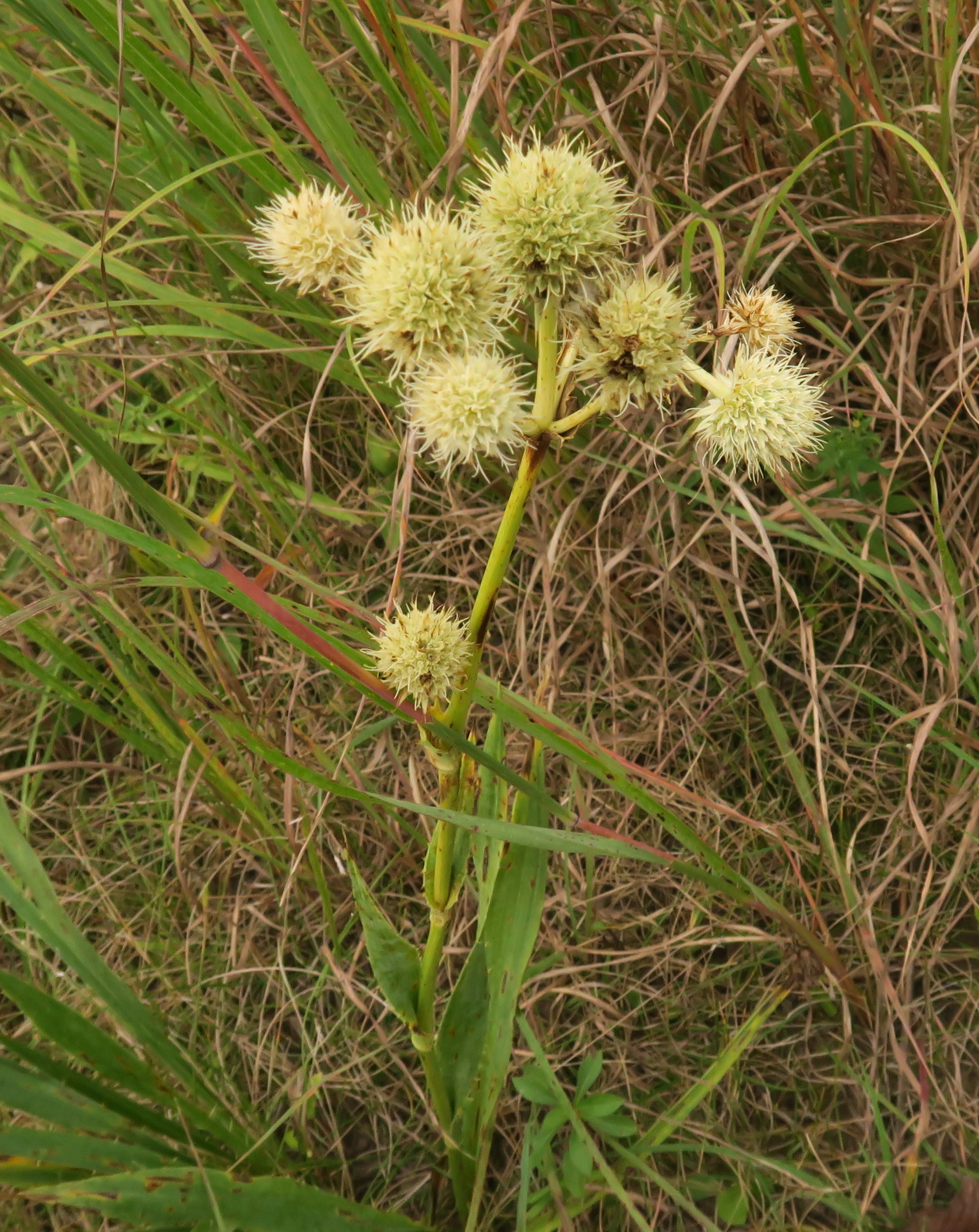 Rattlesnake master plants often come up in the same location the next year. In one area of Lee Tesdell's farm prairie strip, the stems and what's left of last year's seeds are visible in the lower right corner. 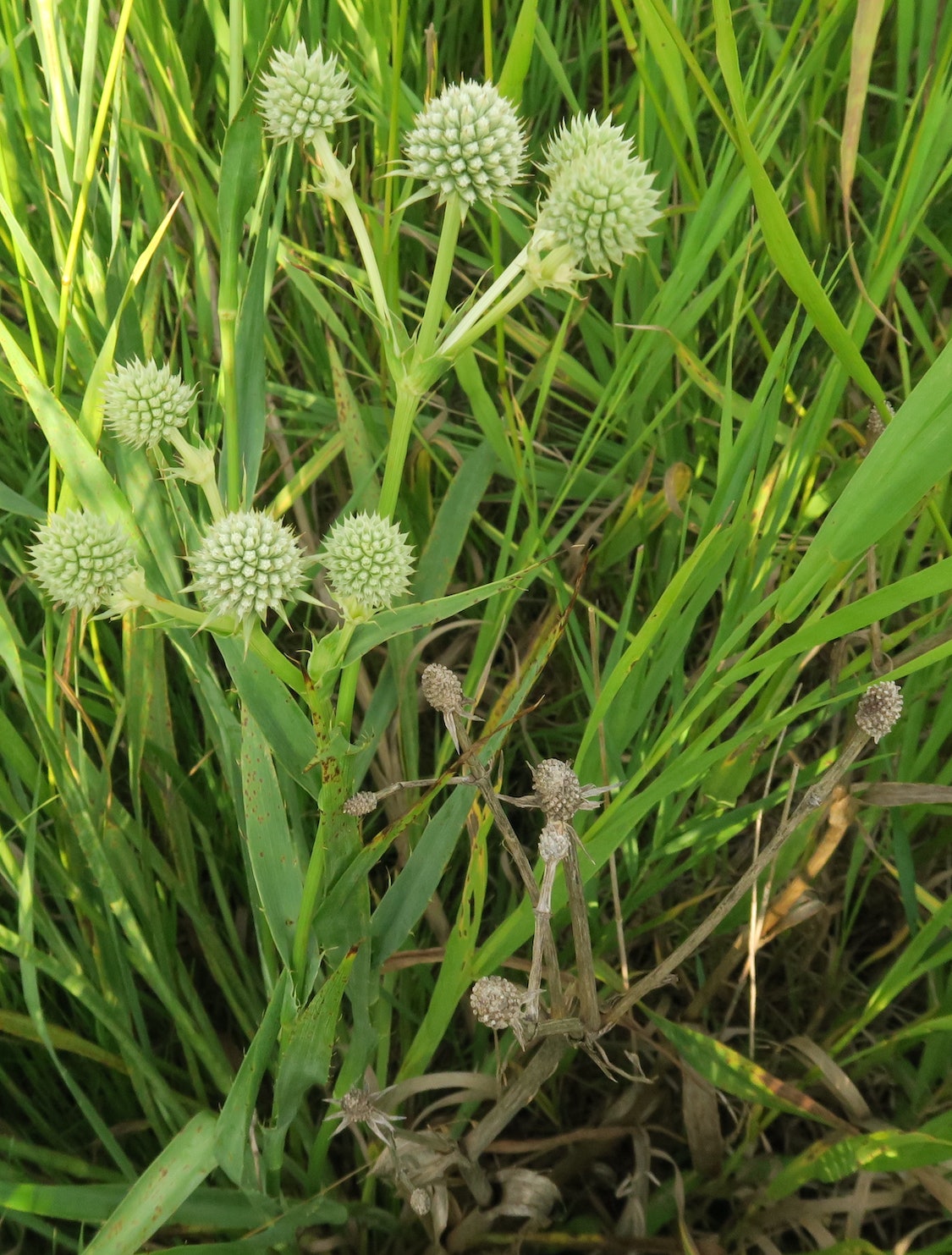 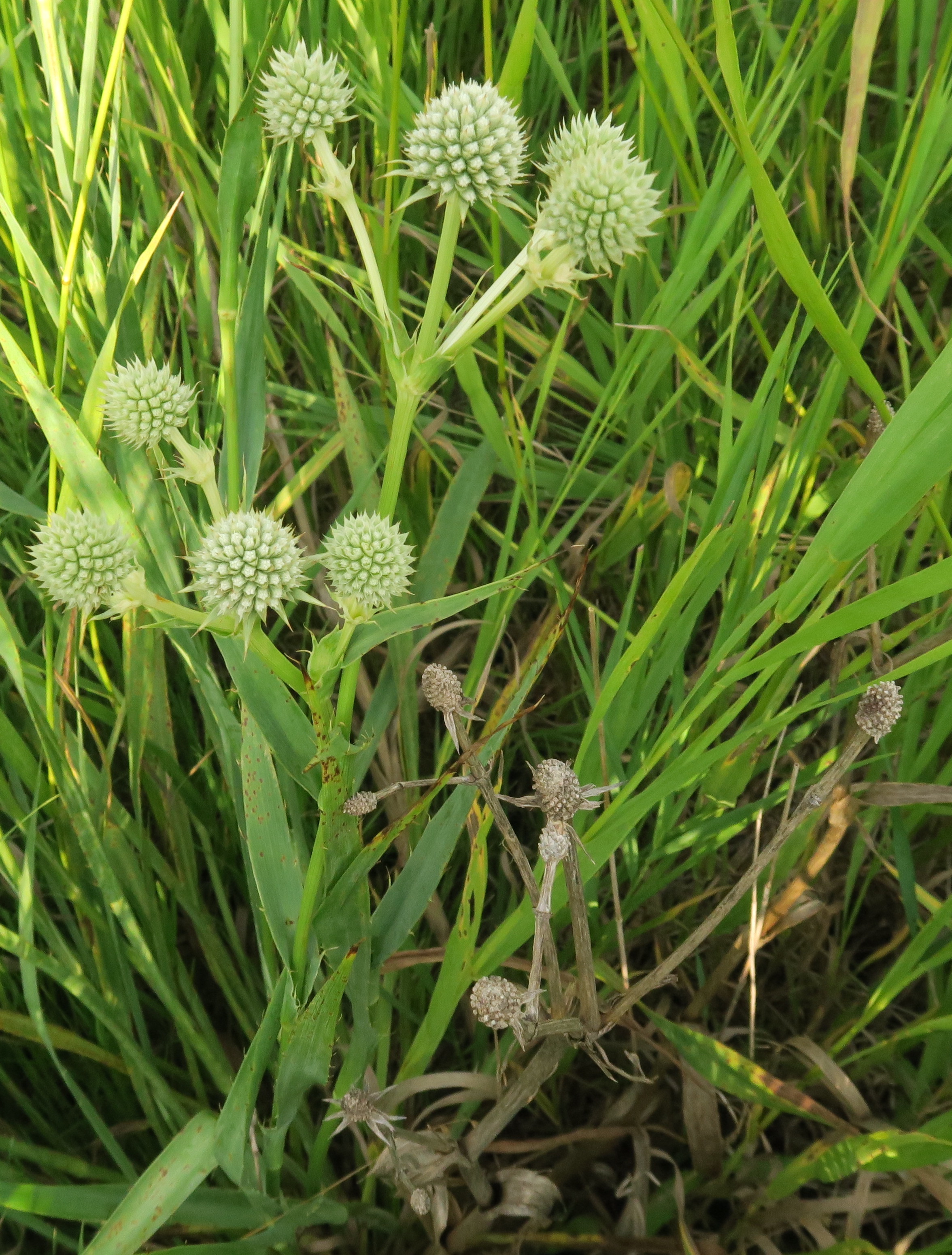