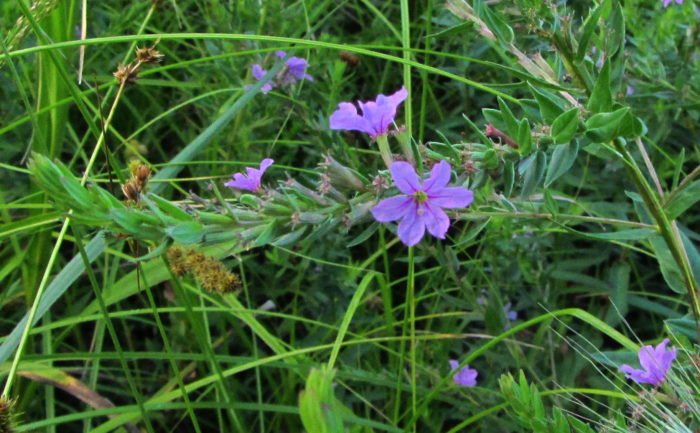 Today’s featured plant is nearing the end of its blooming period for the year. Winged loosestrife (Lythrum alatum) can be found in a variety of wet habitats, such as “moist black soil prairies, marshes, fens, borders of lakes and ponds, areas along rivers and drainage ditches, and low-lying ground along railroads.” Sometimes called winged lythrum, this species is native to most of North America from the Rocky Mountains to the east coast.

I took all of the enclosed photos between late June and late July on lower ground in the prairie restoration area along the Windsor Heights trail, behind the Iowa Department of Natural Resources building on Hickman Road.

Note: winged loosestrife can be confused with purple loosestrife (Lythrum salicaria), which is “now ranked among the most highly problematic invasive species in North America.” At the end of this post I’ve included two pictures of purple loosestrife. If this attractive plant is growing on your property, I recommend pulling it up.

As usual, the Illinois Wildflowers and Minnesota Wildflowers websites are good resources for botanically accurate descriptions of native plants like winged loosestrife.

The Minnesota Wildflowers site describes the flowers well: “¼ to ½ inch across with 6 petals, pale lavender, purple or rose-pink with a darker mid-vein, rounded at the tip and fused at the base into a short tube, forming an off-white throat. Petals are textured like wrinkled tissue paper.”

The flowers near the bottom bloom first:

Moving up the flower spike:

The last flowers to open will be near the top.

Sometimes one or more petals can drop off the flowers.

In this picture, it’s easier to see the darker mid-vein on each petal.

This rattlesnake master in bloom is more eye-catching than the winged loosestrife in the background.

Lots of winged loosestrife is growing alongside partridge pea near the Windsor Heights trail.

Early summer gives way to late summer: some of the last winged loosestrife flowers are blooming near some of the first common sneezeweed flowers I’ve seen this year.

At last, the pretty but harmful purple loosestrife, which “often escapes from cultivation and invades wetlands, sometimes forming dense stands that exclude other plants.” The Illinois Wildflowers site explains that purple loosestrife “was introduced to the United States as an ornamental plant. As compared to the native plant Lythrum alatum (Winged Loosestrife), Purple Loosestrife has wingless stems, a larger size, and slender willow-like leaves that often have hairs.” According to the Minnesota Wildflowers site, “Where Winged Loosestrife does persist it is unlikely to be confused with Purple Loosestrife, as it behaves itself and does not have the dense flower spikes of its cousin, and for those reasons it is not always easy to pick out of the landscape.”