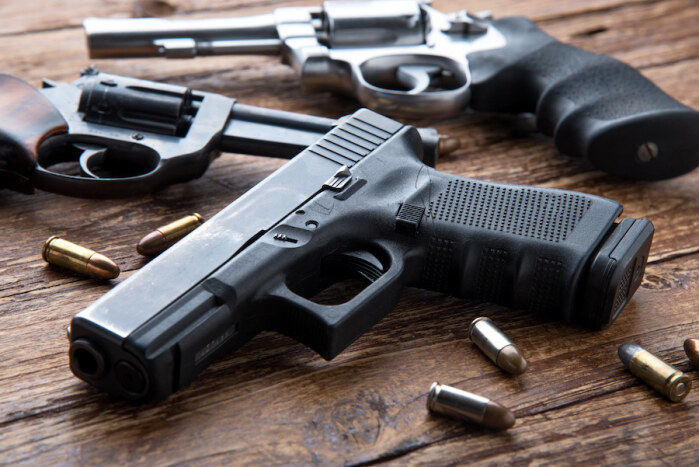 Tom Barton wrote an excellent article for the Cedar Rapids Gazette about what's at stake in this November's vote on a pro-gun amendment to the Iowa Constitution. Republicans who pushed for the amendment have downplayed its potential impact on existing gun regulations. But legal experts told Barton some laws, such as a broad prohibition on firearms ownership by people with felony convictions, might not survive a court challenge if voters approve the constitutional amendment.

In a little-noticed passage tucked into a recent decision on abortion rights, a majority of Iowa Supreme Court justices suggested that existing gun regulations could be doomed under a "strict scrutiny" standard.

"ANY AND ALL RESTRICTIONS ... SHALL BE SUBJECT TO STRICT SCRUTINY"

The constitutional amendment that Republican lawmakers approved in 2019 and again last year reads as follows:

The right of the people to keep and bear arms shall not be infringed. The sovereign state of Iowa affirms and recognizes this right to be a fundamental right. Any and all restrictions of this right shall be subject to strict scrutiny.

Each time state legislators debated the proposal, Iowa House or Senate Democrats offered amendments that would have largely copied the Second Amendment to the U.S. Constitution, without adding that restrictions "shall be subject to strict scrutiny." They warned that background checks and other longstanding gun safety regulations would be threatened if the Iowa constitution were amended in this way.

When hearing challenges to laws or regulations, courts often use a "rational basis" standard, under which the government only needs to show some legitimate interest is served by the policy. It's rare for judges to strike down a law using that approach.

Laws implicating constitutional rights are viewed using heightened scrutiny. As University of Iowa law professor Todd Pettys explained to Barton, federal courts have often used “intermediate scrutiny” in gun rights cases. Under that standard, the state needs to show the law or regulation being challenged advances an important government interest. (Pettys clarified that in a June 2022 case known as Bruen, the U.S. Supreme Court majority rejected that approach, holding instead that "to justify a firearm regulation the government must demonstrate that the regulation is consistent with the Nation’s historical tradition of firearm regulation.")

"Strict scrutiny" is the highest bar to clear. It requires the government to show the challenged policy involves a "compelling" state interest and is "narrowly tailored" to serve that interest.

Iowa House and Senate Republicans who have promoted the constitutional amendment dismissed concerns about its effect on existing laws. State Representative Matt Windschitl argued during Iowa House debate in 2019 that in other states where the constitution subjects gun regulations to "strict scrutiny,"

It's not overturned their permitting process. It's not allowed felons to have firearms. It's not putting firearms in the hands of domestic abusers. None of that. It has not happened. What makes us think that somehow in the great state of Iowa, our judiciary is going to view it any differently?

Side note: Iowa Republicans already made permits optional for buying handguns or carrying concealed weapons in 2021, so they don't need a constitutional amendment to accomplish that objective. But the Iowans for Responsible Gun Laws coalition, which has formed to advocate against the amendment, has warned that background checks and other safety rules would be at risk.

State Representative Steven Holt, who floor managed the gun amendment in 2021, told the Gazette's Barton it was "utterly ridiculous" to think existing laws would be overturned.

That's not the view of the Iowa Firearms Coalition, the state affiliate of the National Rifle Association and a leading proponent of what it calls the "Freedom Amendment." Michael Ware wrote in a June 2022 post on the coalition's website that "strict scrutiny" would be "a near-impossible test for an infringement on a fundamental right."

Ware also noted that requiring Iowa courts to use the strict scrutiny standard "should be a powerful tool for citizens seeking to prevent Iowa authorities from attempting to enforce state OR federal restrictions on that right."

Translation: the goal of the amendment is to undermine current state and federal gun laws.

COURTS "WANT TO SEE PRECISION IN THE LAW"

The U.S. Supreme Court's 2008 Heller decision, which established an individual right to bear arms in one's home, made clear that "nothing in our opinion should be taken to cast doubt on longstanding prohibitions on the possession of firearms by felons and the mentally ill, or laws forbidding the carrying of firearms in sensitive places such as schools and government buildings, or laws imposing conditions and qualifications on the commercial sale of arms."

Since the Heller ruling, courts have upheld gun regulations in many states. Pettys reviewed the legal landscape in a 2019 article for the Iowa Law Review. He observed that even in Louisiana and Missouri, which have adopted strict scrutiny language in their state constitutions, Supreme Courts have upheld bans on firearms possession by people with felony convictions. A similar statute has been in place in Iowa since 1976.

That legislative history, coupled with public statements from the amendment's sponsors disavowing any intent to undermine "reasonable" gun laws, could prompt the Iowa Supreme Court to leave some regulations in place. Pettys explained that if courts decide certain categories of people (such as those under age 18, or those with a felony conviction) are not qualified to own firearms, state laws could survive judicial review: "Strict scrutiny can be difficult to satisfy, but those difficulties will be irrelevant in all firearms cases in which courts conclude that the textually protected right to keep and bear arms is not even in play."

On the other hand, law professor Mark Kende, the director of Drake University's Constitutional Law Center, told the Gazette's Barton,

“Most attempts to regulate guns are going to be struck down by the courts because strict scrutiny means exactly what it says,” he said. “The court very much want to see precision in the law, and if they see any imprecision or think the law goes too far or doesn’t accomplish what it’s supposed to, they’ll strike it down.”

Felonies come in a wide variety of species, not all of which reveal a predilection for violence. A law keeping guns out of the hands of all convicted felons, regardless of the nature or circumstances of their crimes, is arguably not narrowly tailored to the government’s compelling goal of protecting the public from harm.

He told Barton that the "ideal plaintiff" to challenge Iowa's restriction on gun ownership would be someone convicted of a non-violent felony who had completed the sentence associated with that crime.

Missouri's strict scrutiny amendment includes the following language: "Nothing in this section shall be construed to prevent the general assembly from enacting general laws which limit the rights of convicted violent felons or those adjudicated by a court to be a danger to self or others as a result of mental disorder or mental infirmity."

The proposal Iowans will vote on this November has no such disclaimer. On the contrary: "Any and all restrictions of this right shall be subject to strict scrutiny."

The Iowa Supreme Court hasn't decided any big gun rights cases lately, but an opinion in an unrelated case included an odd side note about how the court might apply strict scrutiny to firearms regulations.

In June, five Iowa Supreme Court justices overturned the court's 2018 precedent, which had found the Iowa constitution protects abortion as a fundamental right. The 2018 majority opinion, known as Planned Parenthood v Reynolds II, also held that abortion restrictions should be subject to strict scrutiny, and used that standard of review to strike down a 72-hour waiting period.

Justice Edward Mansfield, one of the dissenters from the 2018 opinion, wrote for the majority in the new abortion case, known as Planned Parenthood v Reynolds IV. He devoted quite a bit of space to critiquing the legal analysis used in the case they were reversing, abbreviated as PPH II. I was struck by this passage on page 47 of the majority opinion.

As used in PPH II, “fundamental right” means that any regulation of abortion must target only women who would benefit from that particular regulation—for example, in that case, “patients who are uncertain when they present for their procedures.” PPH II, 915 N.W.2d at 243. Otherwise, the regulation “sweeps with an impermissibly broad brush.” Id.

That’s an impossible-to-meet standard unless the point is to eliminate all regulations governing abortion. It is exceedingly difficult to tailor any regulation so it applies only to those who would benefit from that specific regulation. For example, how would you know which gun purchasers might fail a background check until you run the background check? Likewise, how do you know who is truly uncertain and could benefit from additional information about pregnancy, childbirth, and abortion until you have provided that information and given them time to review it?

That passage could be interpreted to mean Mansfield believes the Iowa Supreme Court didn't apply a strict scrutiny standard the right way in the 2018 abortion decision.

But Mansfield could be signaling that if gun regulations are subject to strict scrutiny (that is, if Iowans approve the constitutional amendment on this year's ballot), it would be impossible to uphold a law requiring background checks for firearms purchases.

Justices Dana Oxley and Thomas Waterman joined Mansfield's opinion in PPH v Reynolds IV, and Justices Matthew McDermott and Christopher McDonald joined most parts of it, including the section quoted above. Would they find that no gun regulation could be narrowly tailored enough to serve the state's compelling interest in public safety?

Shortly after the PPH v Reynolds IV opinion came out, I asked Pettys what he made of its reference to gun regulations. He replied via email,

But when it comes to background checks, the background check isn’t being conducted for the purpose of benefiting the person being checked—the purpose is to protect those in society who want to be sure that every person who buys a gun isn’t legally barred from buying a gun, and it seems to me that the background check serves that purpose each time it’s conducted. That is, there’s no way for society to know the answer to the question unless it asks the question—there’s no more narrowly tailored way to achieve the goal. It seems to me that the same logic doesn’t apply when it comes to abortion.

Here's hoping Iowans will reject the constitutional amendment, so we will never find out whether the Iowa Supreme Court majority believes a strict scrutiny standard eliminates all permissible firearms regulations, or was merely taking a swipe at how colleagues decided a major case four years ago.

P.S.—Reynolds appointed the newest Iowa Supreme Court justice, David May, in July. He has generally expressed deference to the executive and legislative branches and has pledged to decided cases "based on the law as it is written," consistent with his oath to support the U.S. and Iowa constitutions. It's anyone's guess whether he would be inclined to uphold gun regulations deeply rooted in Iowa history, or would find that no gun safety laws can survive strict scrutiny, should the Iowa Constitution demand that approach.