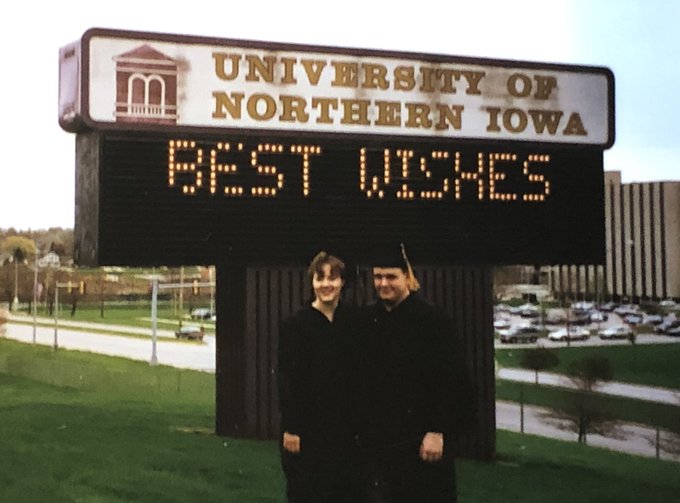 As some of you may have heard, President Joe Biden revealed his student loan forgiveness plan last week. Shockingly (sarcasm), Iowa Republicans reacted with faux outrage and misinformation.

U.S. Senator Joni Ernst had this to say about those who may be receiving assistance through the plan:

Thanks to you (the American taxpayer), liberal elites now get their higher education paid for and tax credits for their $50,000 EVs.

Others, like Representative Ashley Hinson, went further (with characteristic willful ignorance), painting anyone who hasn’t paid off their student loans yet as wealthy and not “working Iowans”:

Student loan debt can’t be cancelled, it can only be transferred. President Biden’s plan is a massive handout to the wealthy on the backs of working Iowans.

MY EDUCATION AND MY LOANS

I assure you this is not unique among us supposedly wealthy, Ivy League, elite, non-working Americans who have student loan debt. Which raises the question: I don’t know any wealthy coastal elites who had to take out loans. (Their parents tend to pay for their college.) But I digress.

I finished college after four years of undergraduate and a year of graduate school. I did not attend Harvard or Yale, nor was I/am I wealthy. I attended Southwestern Community College in Creston, Iowa for two years, the University of Northern Iowa for two years, then The Ohio State University College of Law for a year, before deciding law was not the right path for me. (No, I didn’t flunk out.)

During college, I worked full-time as summer help in manufacturing jobs every year, including a few summers working graveyard shift. I know...how elitist of me.

My student loan tally after college was a bit less than $40,000 borrowed, all federal loans, with about $10,000 in unsubsidized federal loans.

For those not aware, unsubsidized student loan interest starts as soon as you get the money from the government, meaning if you don’t pay interest while you are still in school (which being a student, can be pretty challenging), the interest accrues and capitalizes (meaning it gets added to the principal of your loan) well before you are even done with college.

You know, something predatory lenders would do.

When I finished with school and moved with my wife and daughter back to Iowa in the late 1990s, I had to take a job that paid $10/hr. My wife was not able to work for a while after having our daughter, so I was the sole breadwinner for our family.

I had to consolidate my federal loans and extend them over a longer repayment schedule, because I could not afford the monthly payments on shorter term repayment schedules. To be able to keep the lights on, a roof over our heads, and food on the table, I had to use forbearances for several years, while I worked to get my career moving forward.

Also recall that you cannot default or declare bankruptcy (or any other mechanism used by those with private debt issues) on student loans, as you can with private loans. The debt stays with you as long as you live.

A forbearance, for those unfamiliar, is a temporary pause in repayment in cases of economic hardship. What’s so fun about student loan forbearances, is that the juice keeps running on your loans while you aren’t paying because you have no money.

I had $35,000 in loans, some of which were compounding while I was still in school. Now all of my loans had the juice running and capitalizing while zero principal being was being paid, because I was in financial straits. Again, this is a government program, not a predatory payday lender, or, hell, a loan shark.

In the case of student loan forbearances, as the juice is running while you are not paying down what you borrowed, you can get into situations where you are end up paying $50,000 or $60,000 for the $30,000 you borrowed. Again, this is a government program, supposedly designed to help students who can’t afford college out of pocket.

Now, some will say, “You borrowed the money and couldn’t pay, so that’s your fault if the interest accrued so badly.” I can understand that to an extent (despite being a pretty callous stance), but we’re talking about a federal program for students, folks. I am not sure federal student aid should be designed to deliver a harsh lesson in bare-knuckled capitalism.

HOW BIDEN'S PLAN AFFECTS ME

If the president’s plan goes through, I could have the last $7,000 forgiven.

Iowa GOP talking heads and legislators are calling this a handout to wealthy elites, on the backs of “working Iowans.” I assure you I worked my tail off to pay my loans, paid taxes all along the way, and lived, worked, and contributed to the economy here, in Iowa.

Yet if the federal government stops the bleeding at me “only” paying $82,000 for a $40,000 loan, I am characterized as getting a handout on the backs of "working Iowans." I strongly challenge that.

I am not looking for sympathy, and I have no problem paying back what I borrowed, which I did a long time ago. That said, the sweeping generalizations Republicans are making about the student loan relief are gross misinformation, at a minimum.

HOW BIDEN'S PLAN COULD BE IMPROVED

I think the president has good intentions. His approach will help millions of Americans get out from under at least some of their crushing student loan debt.

Is Biden's plan what I would have proposed? No. I am not an economist, but while there are a lot of good things in the plan (such as capping repayment to a percent of income, and so on), I don’t think it solves some of the core issues, and may further divide the country on class.

Frankly, I don’t care what the MAGA Iowa GOP lawmakers and propagandists think. Unfortunately, many folks will buy the line of excrement they are selling. I just wonder if this could have been handled some other way. Keep in mind that the GOP would find a way to rail against what I am suggesting as well, as these ideas would help working class people more than their donors.

Instead of forgiving up to $10,000 (or $20,000 for borrowers who qualified for Pell grants), I might have proposed something along these lines:

So let’s use a simple hypothetical to see how the above might work. Let’s say a student has the following student debt profile:

In this example, the student would emerge with $5,000 principal remaining, zero back interest, at 2-3 percent interest going forward:

Under this model, the “you should pay what you borrow” GOP argument completely fails. Borrowers, provably, are paying what they borrowed, and many have already paid back the full amount.

People are no longer buried in interest from the federal-government-serving-as-predatory-lender system. Your economic future is more manageable if you do have principal remaining, because interest will be more manageable going forward, and back interest is forgiven. Eliminating interest accrual and capitalization during financial hardships would also be a thing of the past.

Obviously, any student debt relief plan does nothing to solve the separate issue of skyrocketing college costs. But mitigating the student loan crisis now and in the future is a critical step.

In sum, there’s more to student loan forgiveness than Chuck Grassley, Joni Ernst, or Ashley Hinson can write in a snarky, misleading tweet. Please treat anything you read from the Iowa GOP regarding this complex problem and proposed solution as what it is – political hackery.

I hope my story will give people who haven’t dealt with student loan debt, particularly in the past decade or two, a better understanding of what borrowers are going through. I hope they will find a shred of empathy for those buried in this debt.

Top image: Charlie Hodges with his future wife at the University of Northern Iowa in 1996. Photo provided by the author and published with permission.