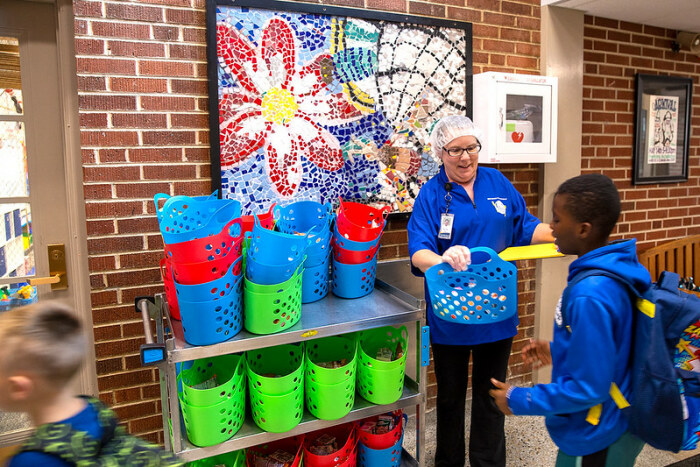 Support staffs have earned our respect

Bruce Lear: Support staff personnel are often ignored or treated as disposable instead of essential. But they are the glue holding schools together.

After a long career as a carpenter, my dad took a job as the night custodian for the small school I graduated from. He worked 3:00 to 11:00. The people in the building loved him because he’d go out of his way to help. He loved the work, and he was good at it.

One time I was on a break from college and my dad had the flu and couldn’t go to work. It was rare, but he called the school and then went to bed.

A few minutes after 3:00, I answered the phone. It was the school superintendent.

He was a loud and in a hurry. I knew he was the superintendent because he managed to tell me twice in about two minutes. He wanted to talk to my dad. I explained he was ill, in bed and probably asleep because that’s what people do when they are sick and not able to work.

He refused to understand my explanation, even though I said it clearly and slowly. Against my sophomore better judgement, I woke Dad up, and he half-asleep staggered to the phone. I only heard one side of the conversation.

“I’m sorry I can’t come in tonight. I’ve got that bug that’s been going around.”

After he hung up, I mustered all my sophomore wisdom and advised, “You should tell that guy to…” Dad interrupted my lecture, by saying, “Yes, this guy is lazy and not a leader, but I’ll do it for those kids who’ll be on stage tonight.”

I offered to help, but he said the superintendent would be watching. He went in, set up the chairs, and then fell into bed still sick.

Later, I heard the same superintendent took vacations during the school year and disappeared frequently for extremely important out of state conferences.

He wasn’t missed. But my support staff Dad was missed after a few minutes of being absent. That’s the definition of an essential employee.

That day, I began to understand how exploited, overworked, and underappreciated support staff employees are in public schools, and I never forgot it.

Many years later, as a teacher and then as an educator advocate, I learned what happened to my dad wasn’t rare. It wasn’t just about an arrogant superintendent who couldn’t be bothered to set up chairs or find someone who could. It was about lack of respect and who has the power.

Support staff personnel are often ignored or treated as disposable instead of essential. But those who know, understand they are the glue holding schools together. Without them, schools won’t function.

While there is a well-documented teacher shortage, there is less publicized shortage of custodians, para educators, secretaries, bus drivers, and cooks. It’s because Burger King pays more than schools do. So does Taco Johns, and Wendy’s, and McDonalds.

America seems more interested in fast food than the education of our children. Make no mistake, teachers aren’t the only people in a school building teaching our children. Without para educators to provide one on one attention to children with special needs, we would have a critical learning crisis. Even the folks who empty garbage, drive the buses, answer the phones, and dispense medication, teach. They all have value and have earned community respect.

We underestimate their skills because we often equate skill with a four-year degree. I’m afraid, many believe support staff personnel are “just para educators” or “just custodians” or “just school secretaries,” or “just bus drivers.” Without a living wage, these dedicated people who truly love kids can’t survive. Neither can our schools.

Some school boards are recognizing this and have raised wages dramatically. Most have not, because the majority party in the Iowa legislature continues to underfund schools like they’ve been doing for a decade.

Here is my favorite story illustrating how support staff members are disrespected.

We were bargaining the contract for the support staff in Sioux City. The out-of-town lawyer hired at $150 an hour (who parked his big Lexus in front of the school) was there to make sure the hourly workers didn’t get too much of a raise. A little while into the bargain, he was pontificating about what was on a page of our contract.

One of the para educators on our team said, “That’s not what it says at all.”

The lawyer scowled and barked, “It most certainly does.”

Without skipping a beat, the para read what our contract really said. It was nothing like what the lawyer read.

I said, “Can I see what you were reading from?”

The lawyer held it up, and it was Cedar Rapids Support Contract. He never apologized. He didn’t even blush. He just continued blustering.

I could have been a nice guy. But I wasn’t that day. We had to take a break; we were laughing too hard. That was 25 years ago, but I’ve never forgotten it because it showed the condescending attitude some have toward people working hard to make a living.

So, if there’s a respect gap, what would help to close it?

A little gratitude and grace go a long way. If someone does a good job, let them know. Most of the day, support staff go unrecognized. Recognize them.

Give them the grace to make mistakes. I’m pretty sure I’ve learned more from my mistakes than my success stories. Stop treating these people as if they are disposable. There isn’t a long line of folks eager to take their jobs. If mistakes happen, correct them and move on.

Support staff are there to support your work. They can be your best allies. It takes a village to educate kids and make all support personnel be an important part of the village. That can only happen if you are true partners.

New teachers, make the custodial staff your best friends. If you are locked out, they’ll let you in. They’ll help in puking emergencies. You need them.

You need a voice in your profession. If you haven’t joined the Iowa State Education Association (ISEA), I would suggest you strongly consider it. Police officers never go into a risky situation without backup. You are in a dangerous profession where you can easily be criticized or even sued. ISEA is your backup.

Thanks for being a vital part of the school community.

A house collapses without appropriate support. Without a dedicated support staff, a school doesn’t function, and kids are cheated. Let’s work together to ensure our kids get a world class education.