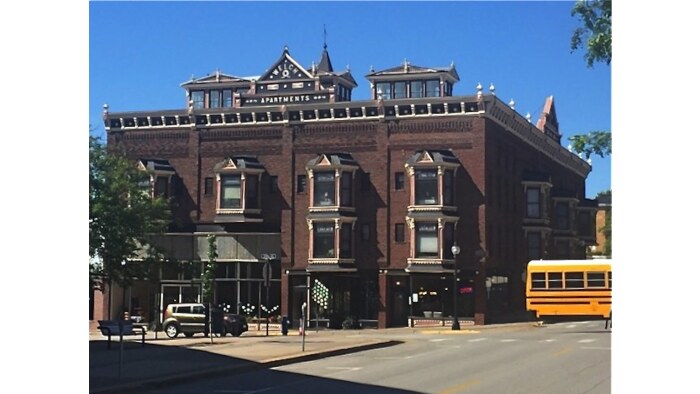 Where was Susie Clark's school?

Iowa’s 1857 constitution mandated public education for “all the youths of the State, without distinction of color,” but it took an Iowa Supreme Court ruling more than a decade later to end racial segregation. The 1868 case was named for that Muscatine student: Clark v. Board of School Directors.

“While older, wiser heads wrote the suit and followed it through the courts, it was Susan Clark on whose 13-year-old shoulders lay the burden of desegregating the public schools of the state of Iowa,” said Sue Thielmann, retired MHS guidance counselor, addressing the board of education in 2019 ahead of their unanimous vote to name the combined former middle schools for Susan.

“It was Susan Clark who, day after day, held her head high and walked into the public schools of Muscatine, Iowa, to get the education she knew she deserved.”

The building opened in September 1961 as West Junior High. In 1983 it became West Middle School.

Susie—how she was known until after her marriage to the Rev. Richard Holley in 1878—never saw any current school building, of course. Her first day of high school was in a building on Iowa Avenue, down the block and across the street from her family’s home at West 3rd and Chestnut. Today we know it as the Welch Apartments.

Those few steps from home were a big change after years of walking to and from the “African School” at the A.M.E. church on East 7th Street between Mulberry and Orange. Maybe she also walked to a location the district offered at the bottom of Green Street.

From the Muscatine Journal, September 20, 1867:
MUSCATINE, Sept. 10th 1867.
Alex. Clark. Esq.—I am authorized by the School Board of this city to refuse your children admittance to Grammar School No 2.
JOSEPH P. ELDRIDGE, Principal

The April 1868 court ruling tells “that on the 10th day of September, 1867, said school being in session, she presented herself, and demanded to be received therein as a scholar under the common school law; that said defendants refused to admit or receive her as a pupil, but illegally excluded her therefrom.”

Mr. Eldridge was brand new, appointed less than a month earlier, and maybe felt put in a tough spot. In a recent election, the school board members had taken a pledge against mixing the races.

Did they know a “colored” student was coming? Alexander may have given warning as he did when Susan and her two siblings tried to attend two years earlier. From his letter in the Muscatine Journal, September 12, 1865: “I sent my three children to No. 2 on Monday, September 4th, after informing the president of the board of school directors that I would send them until a colored school was provided.”

Clark explained that the Black church had sought a new arrangement for two years and would no longer provide the district’s “colored” school. School No. 2 was only three blocks up West Hill from their home.

After filing suit and receiving a favorable decision in district court, Clark wrote another published letter.

The Courier says I want to force my "picaninnies" to be seated by white children and receive their spanking as white children do.— Well, that is its notion, but my personal object is that my children attend where they can receive the largest and best advantages of learning. I have one at present in the colored school, one at home under private instructions, the other at Grinnell College. I have been forced to thus separate them for their own good and not from my own choice.

Susan’s older sister Rebecca attended Grinnell in Spring 1867, and her father says she is still there in the fall. Apparently Susie is at home while the board appeals her case, and Alexander Jr. attends the African School, which moves, at some point, into the 3rd and Iowa building.

The destruction of the No. 1 school [by lightning on July 2, 1868] and the almost simultaneous purchase of [another] lowa Avenue property caused considerable debate as to what should be built where. The matter was finally resolved by a plan to grade down the Seventh and Orange Street location and erect a building adequate for both high school and grade school classes. [...] The new building was ready for occupancy in August, 1869, and the high school moved from its quarters at Third Street and Iowa Avenue.

And so, Susie’s last two years of high school were back at 7th and Orange, just steps away from her A.M.E. school. Full circle.

Next time: Through story and song

Top image: The Welch Apartments building where Susie Clark went for her first year of Muscatine High School, 1868-69. The barely visible steeple may date from that period.