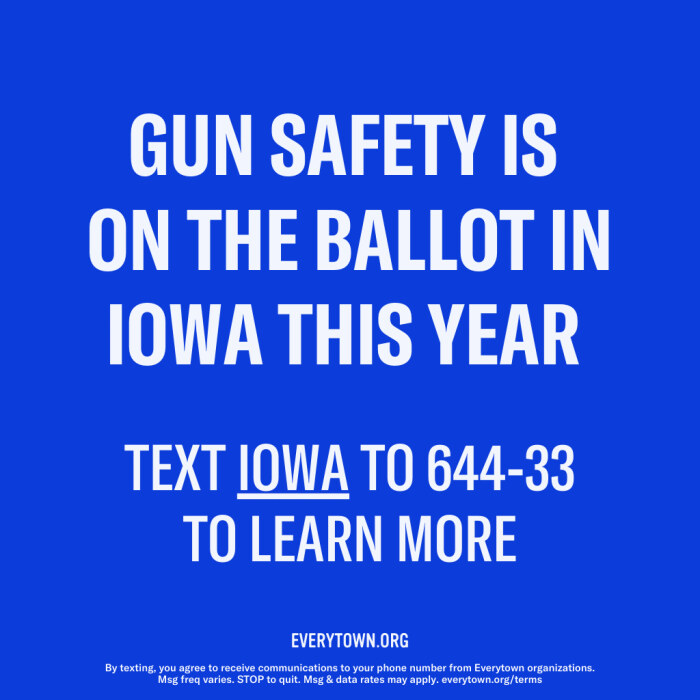 Turn the ballot over and vote no on Public Measure 1

Katie Jones lives in Des Moines with her family. She is passionate about gun violence prevention.

Gun safety is on the ballot in Iowa this year. Voters will consider a state constitutional amendment called Public Measure 1, which states, “The right of the people to keep and bear arms shall not be infringed. The sovereign state of Iowa affirms and recognizes this right to be a fundamental individual right. Any and all restrictions of this right shall be subject to strict scrutiny.”

The last sentence makes this amendment very different from the U.S. Constitution's Second Amendment, and more extreme. What is strict scrutiny and how would it change the legal landscape?

Strict scrutiny requires that a judge determine that a challenged law furthers a “compelling government interest” and is “narrowly tailored” to achieve that interest.

The gun lobby claims that strict scrutiny amendments “restore” the right to keep and bear arms, when what they really do is threaten public safety laws forcing judges to apply the highest judicial standard when analyzing firearm-related laws. This standard is not required by the U.S. Supreme Court’s decision on gun rights from June. This amendment is backed by out of state special interests who put profits over people.

Only three other states have similar language in their constitutions: Alabama, Louisiana, and Missouri. All three rank in the top five states for highest rates of gun deaths in the U.S. and have gun death rates double Iowa’s current rate.

These are the main reasons to vote no:

1. If passed, this amendment will threaten public safety laws by forcing judges to apply the highest judicial standard when analyzing firearm-related laws.

2. It will put taxpayers on the hook for costly litigation.

3. It will restrict future legislatures from passing gun safety legislation and will tie the hands of our legislators and judges, with its reckless and extreme strict scrutiny language.

In Louisiana, after the strict scrutiny amendment passed for their constitution, a convicted domestic abuser challenged the constitutionality of a state law prohibiting possession of a firearm by people convicted of misdemeanor domestic violence crimes.

This extreme approach would invite frivolous litigation, undermine decades of case law in the state courts and put in jeopardy many moderate, common sense gun laws. Instead of protecting our rights, this intentionally confusing amendment will weaken our current laws. Here's what's at stake in Iowa. Iowa’s current laws:

Laws like these might be declared unconstitutional, if challenged under this extreme version of the Second Amendment.

The Missouri State Auditor's Office created a fiscal note before the amendment passed in that state that predicted the amendment would cost taxpayers hundreds of millions of dollars if the amendment was passed. The fiscal note states "The cost to state or local government is between $243.9 million and unknown depending upon substantial expected litigation related to the amendment."

Firearms are now the leading cause of death for children and teens ages 1 to 19 years old in the U.S. (this statistic includes homicides, suicides, and unintentional deaths by firearm). In 2020, the nationwide firearm homicide rate reached its highest level in nearly three decades, increasing by nearly 35 percent from 2019, while the firearm suicide rate remained even higher than the firearm homicide rate. This amendment, if passed, would likely make gun violence in Iowa even worse.

Please spread the word to other Iowans about this dangerous gun amendment. Let voters know Public Measure 1 is too extreme for our schools and families. Turn the ballot over and vote no.

Top graphic published with permission from Everytown for Gun Safety.