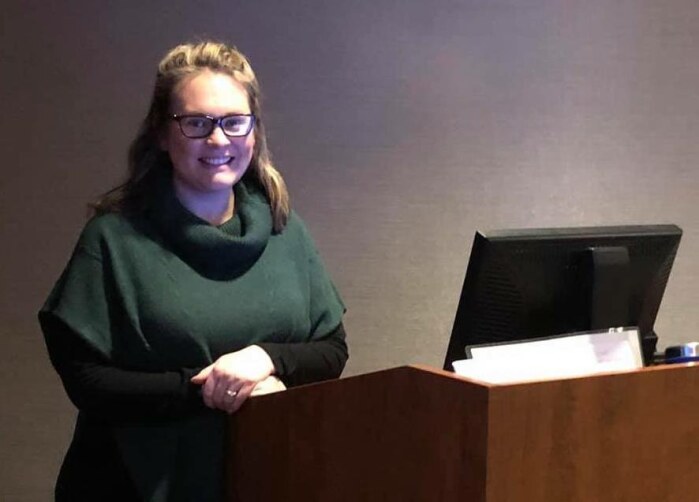 Rachel Bruns is a volunteer advocate for quality maternal health care in Iowa.

In August, I spoke to the Broadlawns Board of Trustees for the third time in the past four years.

You can read my comments from my first time speaking during their citizen comment period in July 2018 when I was five months pregnant and looking for VBAC supportive care for the birth of my second child. Unbeknownst to me at the time, this experience launched my maternal health advocacy.

Flash forward a year to eight months postpartum and I, along with others, re-launched the International Cesarean Awareness Network (ICAN) of Central Iowa chapter. ICAN is a nonprofit organization whose mission is to improve maternal-child health by reducing preventable cesareans through education, supporting cesarean recovery, and advocating for vaginal birth after cesarean (VBAC) with more than 100 chapters around the world including Quad Cities and Central Iowa.

I spoke a second time during the early months of the COVID-19 pandemic regarding Broadlawns’ COVID-19 restrictions on doulas and policy recommending separation of a COVID-19 positive mother from their newborn baby, which contradicted World Health Organization recommendations. At the time, Broadlawns, UnityPoint Des Moines, and MercyOne Des Moines had the same policies to coordinate COVID response efforts across Polk County. I wrote an op-ed in the Des Moines Register regarding how these policies were exacerbating the existing maternal health crisis.

Since I last spoke to the Trustees about Broadlawns' VBAC ban four years ago, Broadlawns upgraded its facilities to include a beautiful new birthing center. Unfortunately people with a prior c-section, who plan to have a Trial of Labor After Cesarean with hopes of a VBAC, are still not welcome there.

As a Level 1 Maternal Health facility, Broadlawns should have the capacity to support VBAC care in alignment with ACOG Guidelines for VBAC and Maternal Levels of Care. You can read my August 2022 comments or watch the video for more information.

I’m not the only one who has recently given Broadlawns feedback on the facility's VBAC ban, as evidenced by comments in this Facebook post by Broadlawns during Cesarean Awareness Month. Broadlawns later edited the original post to remove phrases in their original post that included "our birth team works for you," "reviewed the statistics and advocated for myself," and "Forced into a corner without a choice." [Editor's note: Screenshots of the original post and some comments are enclosed below.]

This is at a time when cesareans are more expensive to Broadlawns patients and Iowa has a medically unexplainable higher low-risk cesarean rate and total cesarean rate for Black women compared to all other races.

Lack of access to VBAC care in Des Moines disprortionately impacts those with higher primary and low-risk cesarean rates the most, and finding supportive care at other area hospitals is challenging. If Broadlawns’ vision is to “be the best public hospital in the United States,” they have some work to do.

Just the other week, I read an article about a Maternal Health Panel hosted by ICAN of Santa Barbara. Two physicians commented on a Santa Barbara hospital's recent decision to reverse their VBAC ban.

Dr. Emiliano Chavira, a Los Angeles-based OB/GYN with subspeciality training and certification in Maternal-Fetal Medicine for high risk pregnancies, stated that every obstetrician, labor and delivery nurse, and anesthesiologist should already be trained in how to handle a VBAC.

"Are they suggesting there is going to be a VBAC team or one VBAC provider? That doesn't make sense to me," he said. "An obstetric unit has a responsibility to prepare for emergencies of all types. That can be a hemorrhage, uterine prolapse, seizure, amniotic fluid embolism. People are supposed to be doing drills and figuring out how to respond to these emergencies. I don't really understand how VBACs are any different."

"You don't need experts to do a VBAC, you need people to be very well trained in emergencies, and not simply for VBACs, but for everything because VBAC is not the most dangerous thing we do and it's not the common emergency that will arise," she said.

While I hope maternal health advocates like me won’t need to speak at future Broadlawns Trustees meetings, I've seen no indication of movement for change at the hospital. We need leadership at Broadlawns to find solutions to increase access to VBAC care and improve maternal health in Polk County.

To get to these issues, ICAN of Central released a Broadlawns Trustee Candidate Maternal-Health Questionnaire (see the questions below). We produced a similar questionnaire in 2020; you can see the answers from the candidates who responded here.

Unfortunately, at this writing only one of the six candidates running for three open seats for the Broadlawns Trustees has responded to the questionnaire. You can read Bruce Schmiedlin's response here. We will add any more that may come in.

ICAN does not endorse any candidates and facilitates this questionnaire on behalf of our chapter members, including more than 800 women. Our members want to understand how Broadlawns Trustees will address constituent concerns around maternal-health issues, both at Broadlawns and as a member of statewide organizations such as the Iowa Hospital Association. Such organizations play a significant role, for better or worse, on the quality and accessibility of care beyond the walls of Broadlawns.

If you live in Polk County and care about improving maternal health outcomes in Iowa, please consider asking the Broadlawns Trustees candidates these questions. We need elected leaders at our tax-funded county hospital to be willing to engage with constituents on issues impacting equity and outcomes on one of the biggest health crises facing our country. Of course Broadlawns is not the only hospital impacting these outcomes, but they are the only one where the public can vote for their board leadership.

Top photo of Rachel Bruns provided by the author and published with permission. 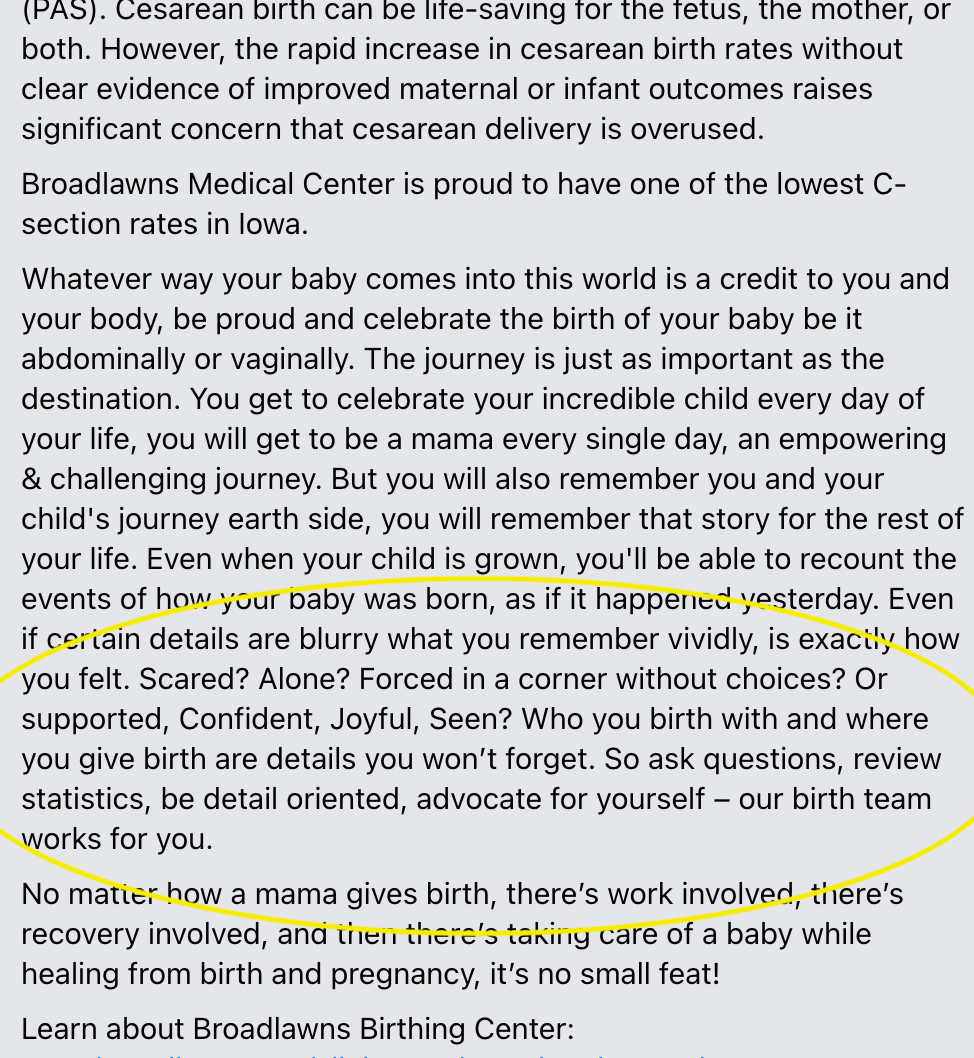 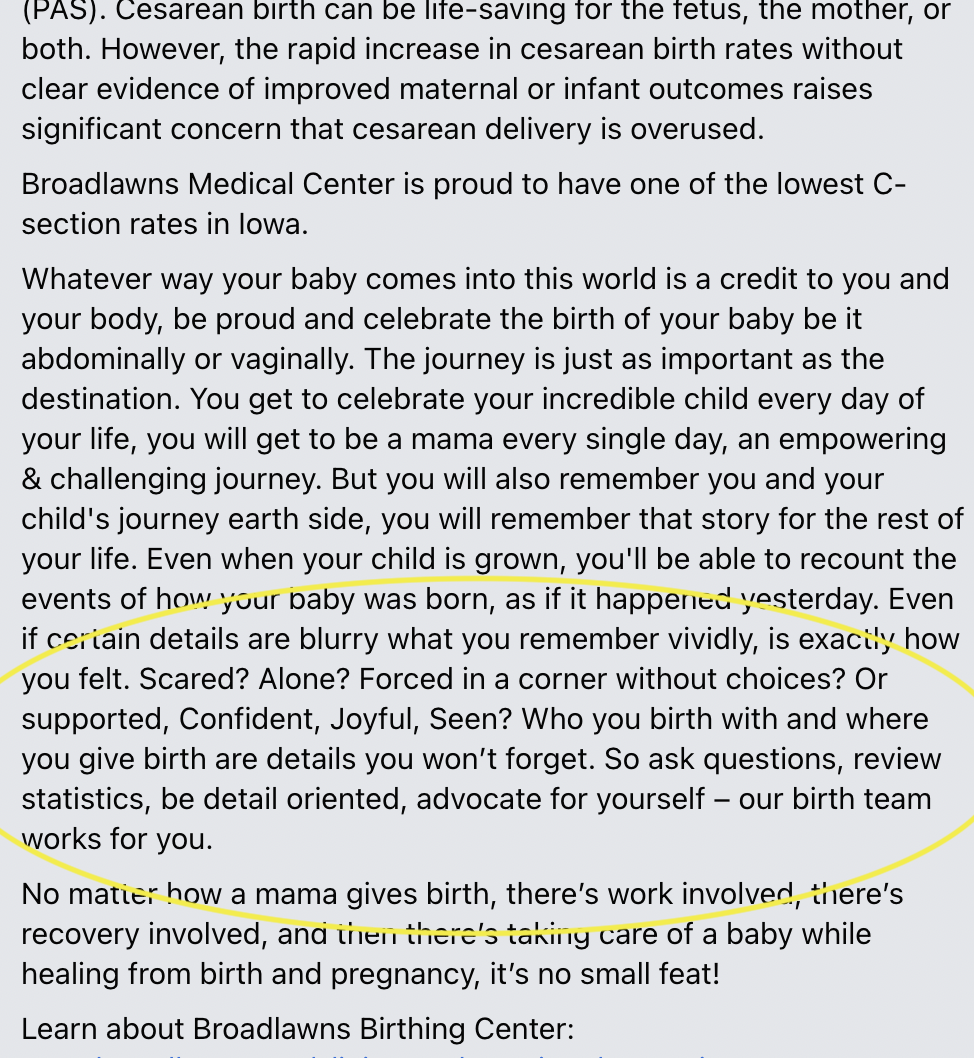 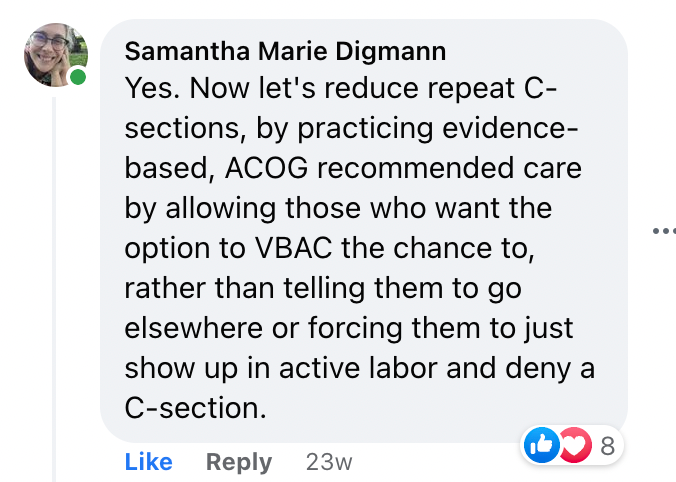 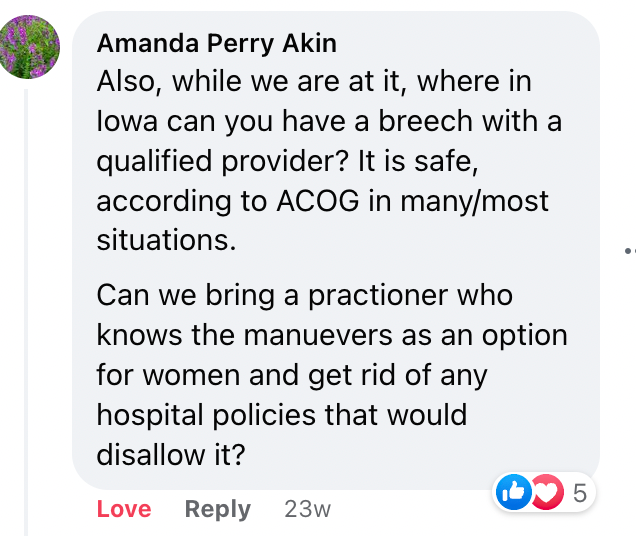 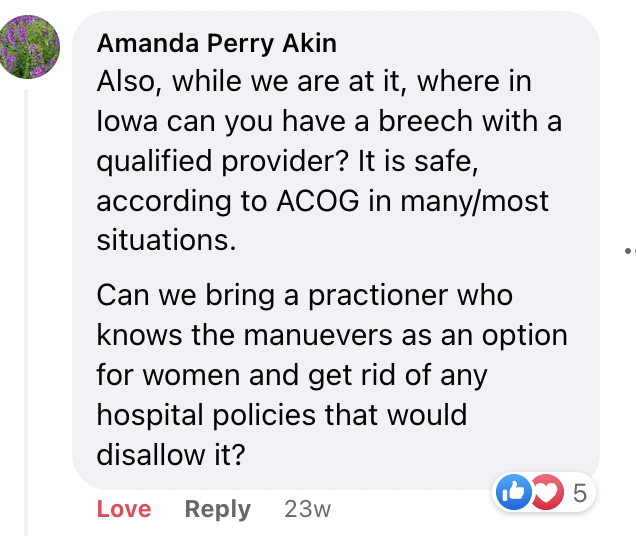 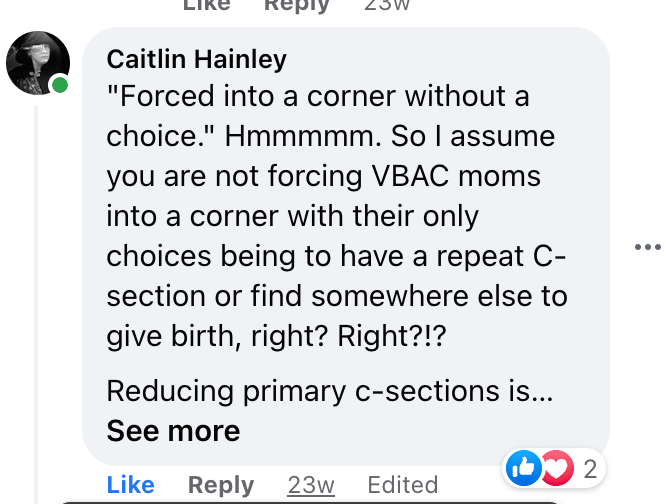 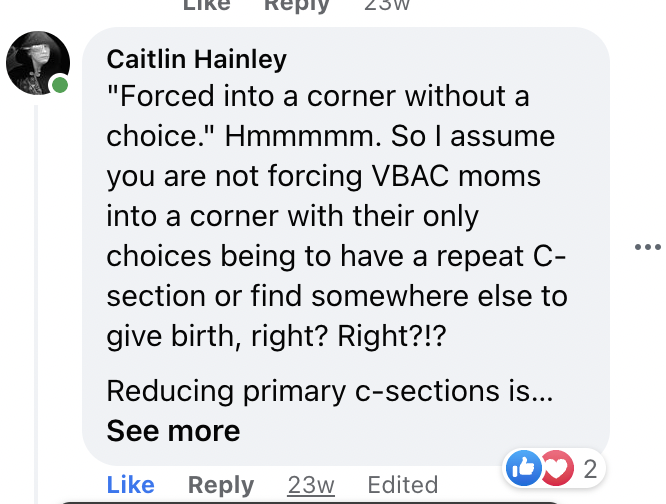 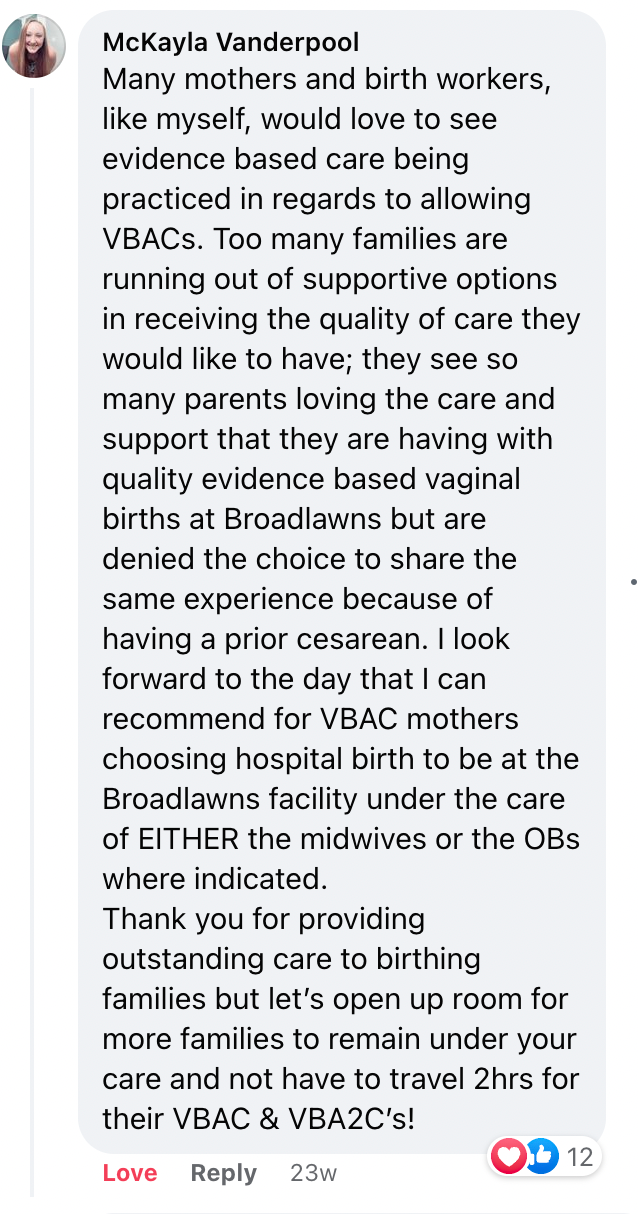 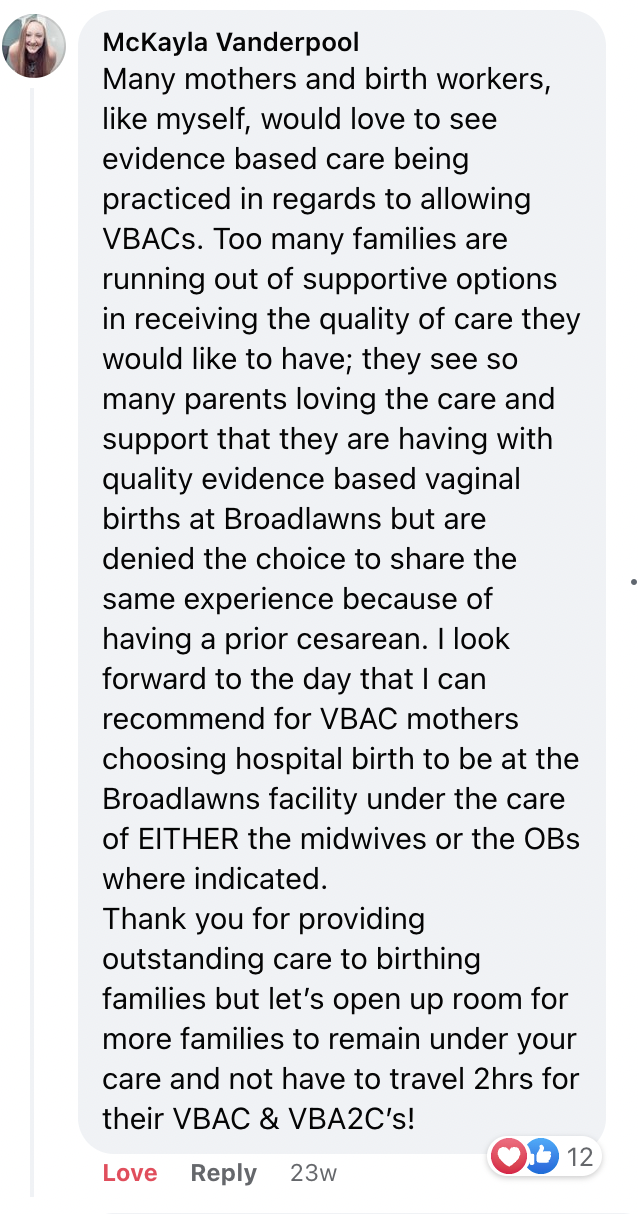