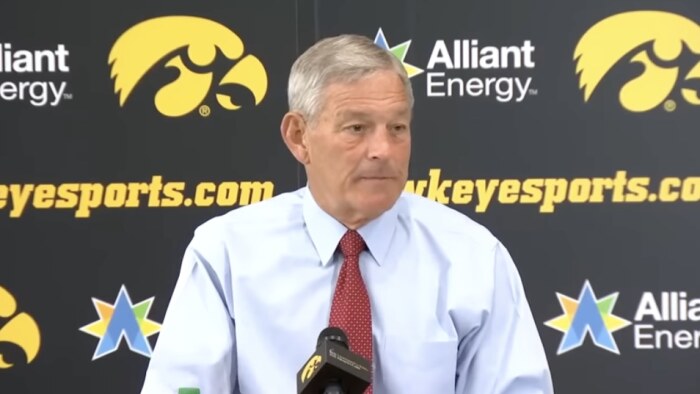 It is safe to assume Kirk Ferentz has not enjoyed the glorious autumn in Iowa the way he would prefer.

He has feverishly worked his Bubble Yum during the Hawkeyes’ games this season. He has been worked over during his post-game press conferences and again at his weekly meetings with the media on Tuesdays.

Being a college football coach is never a picnic. But this year, life for the longest-tenured football coach in big-time college athletics has been more stressful than most years.

We saw that last week when the normally measured coach referred to the media session with journalists following the Hawkeyes’ 54-10 loss to Ohio State University as an “interrogation.”

But I come today to sing Kirk Ferentz’s praises, not to dog-pile on him.

I have never professed to be an expert on football x’s and o’s. But I do know that Iowa’s top elected official should take a page from the Ferentz playbook and make herself available to reporters, too.

Ferentz does not blow off these gatherings with reporters by scheduling other commitments then. He does not get to avoid questions from reporters or columnists who might be especially pushy. He does not duck out after a couple of questions and retreat to the solitude of his office.

Ferentz knows the Q&A sessions are an expectation of the job. He understands that facing tough questions and offering answers, explanations, and analysis are an important way to communicate through the media to Hawkeye fans.

Regular Q&A sessions with the media should also be an inescapable part of serving as the governor of Iowa.

Kim Reynolds’ aversion to standing in front of a group of reporters and columnists is not unique. Ask President Joe Biden about his eagerness for these extended, unscripted exchanges with journalists. Or, go farther back in Iowa history and ask former Governor Chet Culver how much he never relished those meetings with reporters.

In 2017, Reynolds took over for Terry Branstad, who left the governor’s office to become ambassador to China. Branstad typically met with journalists every Monday morning during his time in office.

Reynolds initially continued her mentor’s practice of meeting regularly with journalists, although hers were not as frequent. But four months before the 2018 election, she put the press conferences on hold until the election was over.

During a debate with Democrat Fred Hubbell leading up to their 2018 election race, Reynolds promised to hold weekly press conferences if she won a full term. But journalist Laura Belin, who writes the Bleeding Heartland blog on Iowa government and politics, recently documented how Reynolds has not lived up to that pledge.

During the height of the pandemic, Reynolds met nearly every weekday with journalists. After those ended, she held four formal news conferences during the second half of 2021, and ten months into 2022, the governor has held ten briefings.

It has not always been like this in Iowa.

Governor Robert Ray established the gold standard for transparency when he arrived in the Capitol 53 years ago, holding daily press conferences with reporters. The briefing ended when Ray had answered the last reporter’s questions.

During the Ray era, I was editor of the two newspapers in Albia. I remembering calling the governor’s press secretary, Richard Gilbert, with questions about a Ray initiative to re-start coal mining in southern Iowa. That was a big deal around Albia, because coal mining had been a booming business at one time, and the last underground mine in the state was operating west of Albia in the early 1970s.

Gilbert answered my questions that day, and then he invited me to Ray’s next press conference at the capitol, so I could follow up directly with the governor.

Part of serving as the chief executive of the state involves being available to answer questions and explain problems and solutions to the public. Governors, and football coaches, owe it to the people to explain their actions, or inaction.

Written statements are not adequate, because they remove the means for follow-up or clarifying questions. Written statements that focus on the positive and gloss over the negative do not help the people of Iowa fully understand what is occurring.

The business of governing is what Iowans elect a governor to do. The campaign staffs can do the message manipulation during a campaign. But when it comes to governing, it is not too much to ask for the Kim Reynolds to regularly stand before journalists and answer questions on behalf of the people she is elected to serve.

That is a fundamental part of our democracy. And if a $5-million-a-year football coach can field journalists’ questions like clockwork, so should a $130,000-a-year governor.