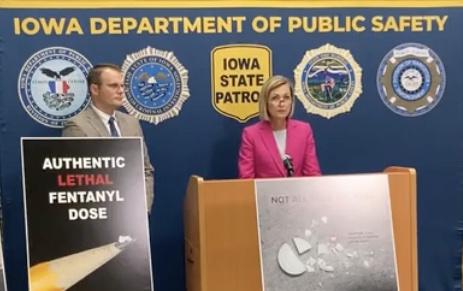 Iowa governor not even close to keeping one 2018 campaign promise

"If elected, will you commit to weekly press conferences?" a moderator asked during the first debate between Iowa's candidates for governor in October 2018. "I do it all the time," Governor Kim Reynolds replied.

Asked again during that campaign's third debate whether she would hold weekly press conferences, Reynolds claimed to have already made that commitment, adding, "If there's any ambiguity, I will."

Bleeding Heartland's review of the governor's public schedule reveals she has not come close to keeping that promise for most of the past four years. After a period of greater accessibility during the COVID-19 pandemic, Reynolds held just four formal news conferences during the second half of 2021. More than 40 weeks into this year, she has held only ten news conferences, the last occurring on July 12.

Reporters with access have sometimes been able to ask the governor a few questions at a "gaggle" after a bill signing or another public event. But most weeks, Reynolds has not scheduled even an informal media availability.

Governor Robert Ray set a high bar for transparency by holding daily news briefings for years during the 1970s. Richard Gilbert, who served as Ray's press secretary for part of that time, wrote in a 2021 commentary that the regular access for journalists benefited the governor as well as the public.

This openness was not for personal aggrandizement, but it helped him do his job. The governor had what amounted to dozens of pairs of ears and eyes in the form of reporters combing state government and asking questions. It meant Ray could know what was going on. When a little problem looked like it could fester into something harmful to the state, it could be dealt with quickly, avoiding a worse situation if ignored.

Gilbert recently told me it was Ray's standard practice to take questions from everyone in the room at his briefings. If the governor didn't know the answer right away, staff would follow up with the journalist later. "When reporters ran into obstacles to learning what was going on, it was my job to get the barriers out of the way," Gilbert recalled in last year's column.

After Branstad returned to the governor's office in 2011, his staff live-streamed the regular Monday briefings and made the full videos accessible on YouTube.

As lieutenant governor for six and a half years, Reynolds attended many of Branstad's pressers. But after becoming governor in May 2017, she didn't follow in her mentor's footsteps for long.

For a while, Reynolds held frequent briefings, though not every week, and not on a predictable day or time. Her staff streamed the news conferences live and archived them on the governor's YouTube channel.

Reynolds held 20 news conferences during the first seven months of 2018. She suspended the practice about four months before the midterm election, and also avoided meeting with newspaper editorial boards.

After winning the November election, Reynolds held three news conferences during the remainder of 2018. The December 11 briefing was the last to be posted on the governor's YouTube channel.

Reynolds wasn't consistent in this area after her inauguration. Her office had convened fourteen press conferences from January 2019 to late August, when Bleeding Heartland highlighted the broken campaign promise. Staff didn't live-stream any of the briefings and usually didn't publish any footage later. On some occasions, staff uploaded the prepared remarks to Reynolds' official Facebook page, cutting the video off before the Q&A, where the most newsworthy moments often happen.

Public schedules released later that year indicate that Reynolds held two news conferences in September (one by phone while she visited Washington, DC), two in October, two in November, and two in December. Again, only a small number of credentialed reporters could witness the exchanges. Members of the public had no way to watch or listen; neither did hundreds of other Iowa news organizations that lacked a dedicated statehouse reporter.

Some weeks in late 2019, when there was no press conference, Reynolds took a few media questions informally after another event. Those gaggles didn't allow for a full airing of salient topics, nor was there any way for Iowans to tune in.

The governor held seven news conferences during the first eleven weeks of 2020. But staff posted only prepared remarks on Facebook. The publicly available videos ended just before journalists began to ask questions.

As with so many aspects of life, COVID-19 changed everything.

During the early months of the pandemic, Reynolds held televised press conferences on most weekdays, with some reporters allowed to participate by phone. Ordinary Iowans could watch the Q&A as well as the prepared remarks, at first on the governor's Facebook page, and later on Iowa PBS (on tv or online).

These sessions were not open to all the media; the governor's press secretary refused to give me the call-in number and excluded a few others as well. Reynolds typically cut off questions before everyone on the phone had a chance to participate. Nevertheless, the governor was far more accessible, holding more than 50 televised briefings from mid-March to June 2020.

Those events became more sporadic over the summer. Still, most weeks in June, July, August, and September 2020, the governor held at least one televised news conference.

Reynolds spent much of October 2020 campaigning for Republican candidates around the state. Her last full news conference before that general election happened on October 7. Although Iowa's COVID-19 hospitalizations and deaths were sharply increasing at the time, Reynolds didn't take questions from the press again until November 5, two days after the election.

Reynolds held several more news conferences in November as the coronavirus surge intensified, and took questions from the press once a week in December.

The governor attended a virtual forum organized by the Iowa Capitol Press Association in early January 2021, and with a few exceptions, kept to a weekly schedule of televised news conferences for the first four months of last year.

WEEKS OR MONTHS WITHOUT A PRESS CONFERENCE

As the 2021 legislative session wound down, Reynolds held two press briefings in May to highlight various initiatives. At one of them, she urged Iowans to "lean further into normal," saying, “There’s no reason for us to continue to fear COVID-19 any longer."

According to Bleeding Heartland's review of the governor's public schedule, Reynolds appeared at just five formal news conferences during the last seven months of 2021:

Reynolds occasionally took a few questions when she was out and about, but her public schedules for the second half of 2021 typically did not list any planned media availabilities.

Most of the governor's news conferences this year happened during the 2022 legislative session. She appeared at the Iowa Capitol Press Association's legislative forum the first week in January, then held press conferences on January 28 (in Sioux Center), February 2, February 15, March 6 (in Winterset), March 16, March 30, and April 26.

Ordinary Iowans hoping to watch the governor answer unscripted questions were mostly out of luck. If Reynolds' staff uploaded any footage from those news conferences, the video usually showed prepared remarks only, cutting off before reporter queries.

Since state lawmakers adjourned for the year in late May, Reynolds has held only two news conferences: on June 14 (to announce a school safety initiative) and on July 12 (to highlight the growing problem of fentanyl in Iowa). On the governor's Facebook page, the video from June 14 ended before the Q&A. The July 12 video showed some reporters' questions about fentanyl use. The governor held a brief gaggle afterwards, but the public had no way to observe the interaction or learn what Reynolds said, aside from any sound bites that may have ended up in media coverage.

Just like four years ago, Reynolds has avoided press conferences for months leading up to the midterm election. She further limited her exposure to unpredictable questions by agreeing to debate her Democratic challenger only once, instead of the usual three times.

Asked repeatedly why the governor did not honor her 2018 campaign pledge, and how often she will hold news conferences if elected to another four-year term, spokesperson Alex Murphy did not respond to any of Bleeding Heartland's inquiries.

Without regular opportunities to engage with the governor, it's harder for journalists to hold state government accountable. Add this broken promise to the long list of reasons the Reynolds administration has been Iowa's least transparent in decades.