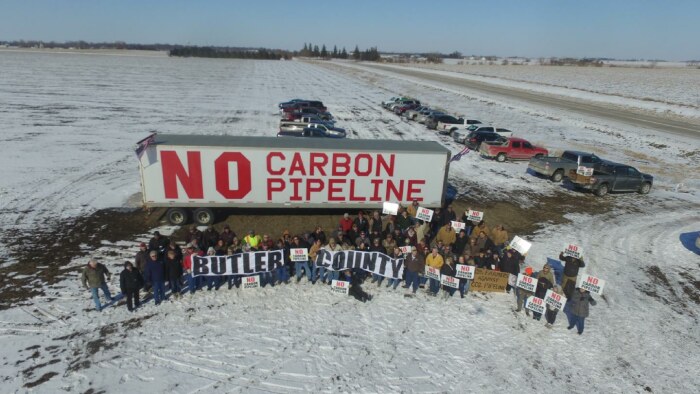 Pat Grassley is feeling the heat on carbon pipelines

Iowa House Speaker Pat Grassley wrote to the Iowa Utilities Board this week to object to a waiver request from one of the companies seeking to build a carbon dioxide pipeline in Iowa.

The unusual move reflects strong opposition to the projects in rural Iowa.

The top Iowa House Republican has represented Butler County in the legislature since 2007, and his new district covers all of Butler and part of Bremer County. Navigator Heartland Greenway's proposed route would run through both counties, and the Butler and Bremer county boards of supervisors are among dozens of local government bodies that have submitted formal objections to the plan.

Grassley's October 31 letter to the three Iowa Utilities Board members noted, "In my sixteen years in the Iowa House, I have never heard more concerns from constituents related to a single issue than the CO2 pipeline project currently proposed for our area."

Many farmers oppose the plans because research has linked other underground pipelines to soil degradation and reduced crop yields. Constituents opposing the pipeline packed Grassley's legislative forums earlier in the year, and by some accounts refused to sign his nominating petitions.

Grassley's letter urged the Iowa Utilities Board to reject a waiver request that Navigator recently filed, related to "a company’s obligations prior to, and after construction." He argued,

These rules, developed by the IUB, were intended to protect and/or restore (to the greatest extent possible) the landowner’s property that will be damaged by the proposed project. This company’s request for a waiver to these rules, to my knowledge, is not common, and it clearly displays their concern with protecting their bottom line over their duty to fairly work with landowners.

Notably, the House speaker hasn't come out against carbon pipelines as a whole, and hasn't endorsed legislative proposals that would limit the use of eminent domain to seize land for the pipelines. Big Ag lobby groups, which are powerful constituencies within the Republican coalition, are all in on the idea as a way to boost the ethanol industry. A rival CO2 pipeline project, Summit Carbon Solutions, is associated with Bruce Rastetter, among the largest individual donors to Iowa Republican candidates over the past fifteen years.

But objecting to Navigator's waiver request signals that Grassley understands how unpopular the pipelines are among his own constituents. If Republicans retain control of the Iowa House, as they are favored to do, the speaker—and colleagues representing other rural counties in the pipelines' path—may feel pressure to allow some eminent domain bill to move forward next year.

A Navigator representative told Jared Strong of Iowa Capital Dispatch that the company was rescinding its waiver request after receiving “constructive feedback from landowners.”