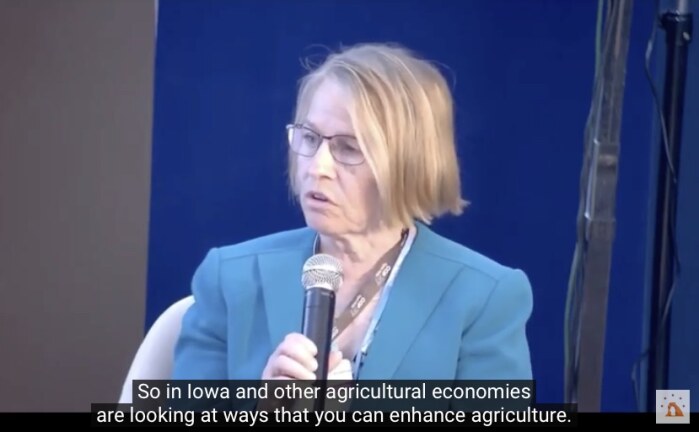 Miller-Meeks attended COP27 in Sharm El-Sheikh, Egypt as part of a delegation of six House Republicans who belong to the Conservative Climate Caucus. U.S. Representative John Curtis of Utah formed that caucus last year with support from fossil fuel industry and influential conservative advocacy groups. Miller-Meeks is the only Iowan among the 76 House Republicans currently listed as Conservative Climate Caucus members.

The Conservative Climate Foundation sponsored the House Republican delegation to COP27 and coordinated a panel discussion for the media. Little is known about that organization's finances; its tax filings are not publicly available on the Internal Revenue Service's website or ProPublica's database of tax returns from 501(c)(3) nonprofits.

AGRICULTURE AS "PART OF THE SOLUTION"

In this portion of the discussion, a moderator from the Conservative Climate Foundation asked Miller-Meeks about making agriculture less carbon-intensive.

Miller-Meeks emphasized that Iowa is "an agricultural state," saying the sector can be "part of the solution" to reducing carbon emissions in several ways, while also providing "affordable energy solutions." Specifically, she said farming can be enhanced by using less fertilizer, less pesticide, and less fungicide, while maintaining high crop yields to meet global food demand.

"Precision agriculture is very much in vogue in Iowa," Miller-Meeks said. In addition, seeds can be modified to be drought resistant, or to require fewer chemical inputs.

She said she's introduced a bill in Congress to support an institute to study biochar. Produced by burning wood or residue of an organic product, such as corn stover, biochar can be added to "either marginal soil or topsoil." According to Miller-Meeks, the practice improves "soil quality, water quality, water filtration," as well as soil microbiomes.

As for how agriculture can boost energy production, Miller-Meeks touted ethanol, biodiesel, and using manure from livestock production and heat from biodigesters as part of a "closed-loop system." The residue or stover from corn and soybeans can go into biodiesel as well.

"THE RIGHT TONE" OR "A COLOSSAL MISSED OPPORTUNITY"?

Within Iowa's environmental community, reaction to Miller-Meeks' remarks was mixed.

After watching the climate summit panel discussion, Steve Falck, senior policy advocate for the Environmental Law & Policy Center in Iowa, told Bleeding Heartland, “I think the Congresswoman strikes the right tone regarding how to reduce carbon emissions in the agriculture sector. She is right about biochar, mixing with soil improves soil health and is sequestering carbon at the same time. I’m pleased she is introducing legislation.”

Angelisa Belden commented on behalf of the Iowa Environmental Council, an umbrella organization for dozens of nonprofits:

We are encouraged that the Congresswoman felt it was important to attend the summit and is engaging in the conversation about climate change and solutions. As the largest source of greenhouse gas emissions in Iowa, agriculture has the opportunity and responsibility to reduce its carbon and methane emissions. Iowa can be a leader in climate-smart agriculture.

There is also room for an expansion of ideas into higher-impact climate solutions like wind and solar, which Iowa is already a leader in nationally. We hope to work with Congresswoman Miller-Meeks and her office on climate policy that benefits all Iowans.

David Courard-Hauri, Drake University Professor of Environmental Science and Sustainability, was more skeptical about the remarks. He said "Miller-Meeks is absolutely right that there are a number of climate-smart agricultural practices that can play an important role in reducing emissions from the agricultural sector. Many, like the addition of biochar that she mentions, also have important co-benefits, potentially improving water quality and soil health when compared with traditional practices."

But Courard-Hauri said the panel moderator overstated the case by portraying such practices as "creating huge benefits to the climate system."

Modern agriculture relies on very large inputs of fossil fuels for fertilizer production, grain drying, transportation, and so on. Climate smart practices can mitigate that impact, and any real climate solution is going to rely on a large set of small benefits, but we’re not talking about changes at the scale that will make Iowa’s agriculture carbon neutral, for example, let alone make up for some of the fossil fuel use in other sectors.

As for trees, Courard-Hauri strongly encourages planting them. "But historically," he explained, "deforestation has only made up about a quarter of our global emissions, and it’s less now, so even if you replanted all of the primeval forests of the ancient world, you wouldn’t stop climate change, you would just reduce it." The bottom line: "A trillion trees is a great idea, but it isn’t a substitute for phasing out fossil fuels, as Miller-Meeks seems to be suggesting."

Silvia Secchi, a University of Iowa professor in the Department of Geographical and Sustainability Sciences and co-host of a podcast on agriculture's environmental impacts, was more critical. First, she noted that Miller-Meeks claimed agriculture accounts for 25 percent of Iowa's GDP, when the state's own economic data attributes 4 percent of GDP to the sector. (A 2020 analysis by Iowa State University economist Dave Swenson found that agriculture plus ag product manufacturing, such as food and ethanol, accounts for 8.7 percent of Iowa GDP, and the figure rises to 10.3 percent if related industries such as machinery, fertilizers, and chemicals are added.)

More broadly, Secchi sees the focus on certain technologies as problematic. For one thing, "there is mixed evidence that precision agriculture actually decreases input use." A farmer may decide to use more fertilizer in some areas, for example, after learning that would increase yields.

For Secchi, "The biochar myth is like a zombie, it will not die." Advocates hyped biochar years ago as part of a supposed transition to cellulosic ethanol. It's now clear cellulosic ethanol "will not happen, but people still keep selling the biochar story," Secchi said.

You need to burn stuff to make biochar, and they never say why and what you would be burning and just like the case of corn ethanol whether it is scalable. Biochar is not really helpful in places like Iowa either, we already have high soil organic carbon.

Secchi disputes that ethanol is an "affordable energy solution," since the industry "is still indirectly subsidized via the crop insurance program, causes massive water and air pollution problems, and it is not scalable." She noted that half of Iowa's acres planted in corn are part of some 30 million acres nationally that end up as 15 billion gallons of ethanol. "We cannot produce much more corn ethanol than we do without more negative consequences on our food production and environmental sustainability."

Far from being part of a climate response, biodigesters are "just an excuse to do nothing" about confined animal feeding operations, Secchi argued. "Biodigesters do not do anything for emissions from the upstream production cycle for feed (and corn production causes a lot of [greenhouse gas] emissions), and biodigesters only capture a portion of the methane emissions from livestock. That is only if they work properly."

Secchi sees Miller-Meeks as "peddling old tech fixes which have been proven not to be useful, commercially viable and/or scalable. This is consistent with the agricultural lobby’s approach to climate change, to pretend to have all these solutions which taxpayers have to pay for that do not actually change anything. It is a colossal missed opportunity for U.S. agricultural reform."

ENDORSING NEW NUCLEAR REACTORS IN THE U.S. AND ABROAD

Later in the panel discussion, the moderator asked a "lightning round" question: "What's one priority you think we should really advance in clean energy innovation in the next Congress?" Miller-Meeks' answer surprised me.

Alluding to the now-shuttered Duane Arnold nuclear power plant in Linn County, the Iowa Republican called for "investments in fourth, fifth, small-generation nuclear reactors, not only for the United States, but also for developing countries, to give them cleaner sources of energy to develop their economies."

I'm not aware of any nuclear power projects proposed in Iowa. Staff didn't respond to Bleeding Heartland's follow-up questions about whether Miller-Meeks favors nuclear expansion as opposed to government support like the tax credits that helped wind and solar energy grow substantially in Iowa.

Others on the November 11 panel endorsed expanding fossil fuel production within the United States, and Representative Dan Crenshaw of Texas criticized what he called the "deification" of wind and solar. Staff for Miller-Meeks did not respond to inquiries about whether she agrees with that characterization of renewable investments that prioritize wind and solar.

Nuclear power is a polarizing issue in environmental circles. While some have come around to the technology as a way to reduce greenhouse gas emissions, others have concerns about impacts related to mining and waste storage.

Courard-Hauri told Bleeding Heartland he supports nuclear research and development as one way to replace the baseload power coal now provides. While he acknowledged "challenges with storing the waste and of course the danger of plant failure, especially after Fukushima," Courard-Hauri said nuclear was a "very competitive source" for reducing emissions. "From a life-cycle perspective, it is one of the lowest energy-in-to-energy-out sources, on par with solar and wind."

Courard-Hauri also sees modern nuclear power as "pretty darn safe" compared to pollution from coal-fired plants. Research has estimated that fossil fuels air pollution kills about 100,000 people in the U.S. and millions of people globally every year. In contrast, "historically nuclear has been far safer than coal, and current nuclear is much safer than past nuclear, whereas that’s not really true of coal."

Wallace Taylor, conservation chair for the Sierra Club Iowa Chapter, sees nuclear energy as "not clean nor renewable," for several reasons. "The uranium used for fuel is a limited resource. The consequences of uranium mining and processing are devastating to the environment and the uranium is mined out West where it unfairly impacts Native and low-income communities."

Taylor observed that the small modular reactors Miller-Meeks endorsed "will require more highly enriched uranium, up to 20 percent to 25 percent"—a level that raised concerns about Iran's nuclear program, because such material could be used to produce a nuclear weapon.

"The biggest problem with nuclear power is the radioactive waste," Taylor said. "There are already many thousands of tons of waste no one knows what to do with." He's representing the Sierra Club in efforts to oppose "interim" storage facilities for nuclear waste in Texas and New Mexico.

How nuclear power could become a cost-effective energy source is unclear. Courard-Hauri recalled, "Westinghouse went bankrupt five years ago trying to build the next-generation, modular nuclear power plants that Miler-Meeks is talking about. Nuclear power has not solved its cost problem, which is why there is so little activity there, and in the face of the rapid decline in the cost of renewables and energy storage, it’s not clear how large a role it will play going forward." 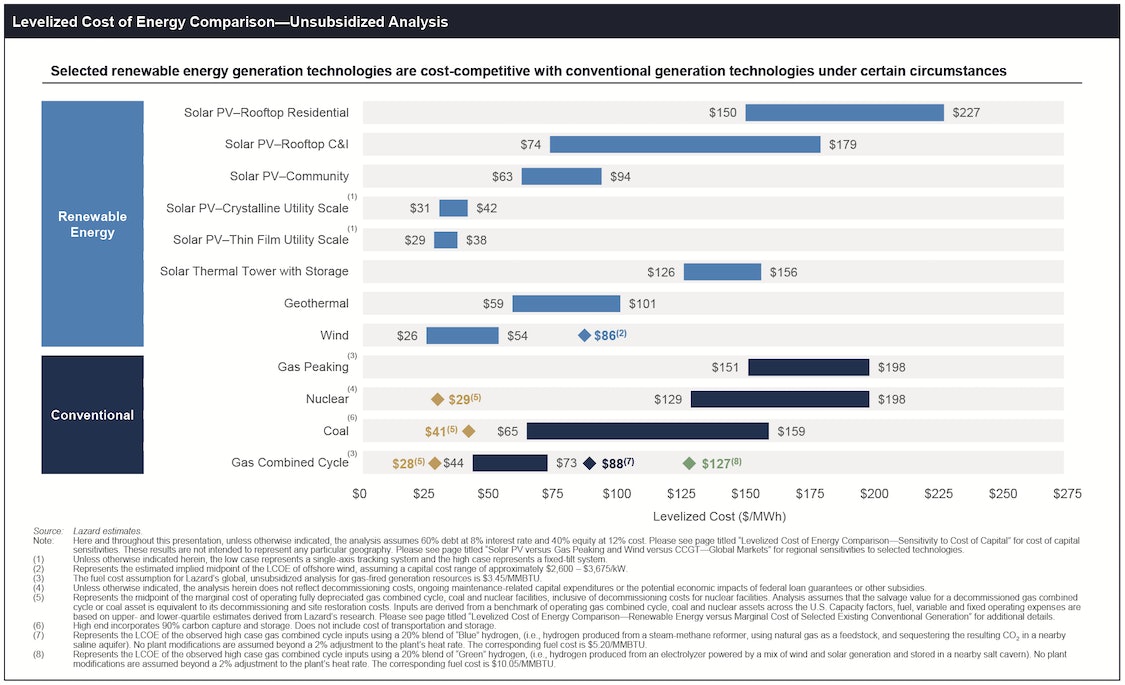 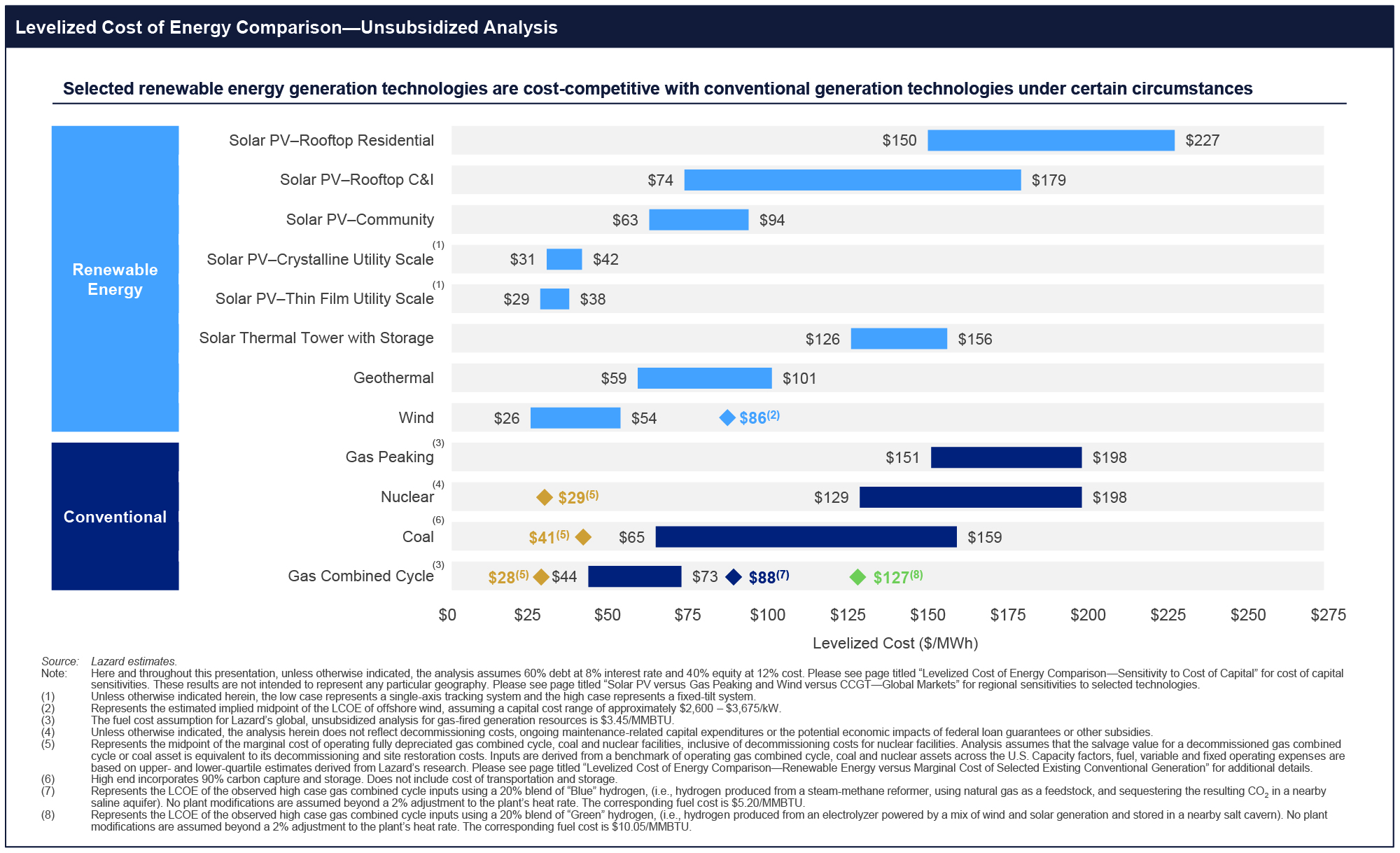 As the climate summit panel wrapped up, the members of Congress were asked what message they would like others to take away from the discussion. Miller-Meeks said, "We all want to leave a cleaner, healthier planet for our children and our grandchildren, and to do so in a way that is affordable and provides the increased energy demands for individuals throughout the world" while allowing the U.S. to compete in a global economy.