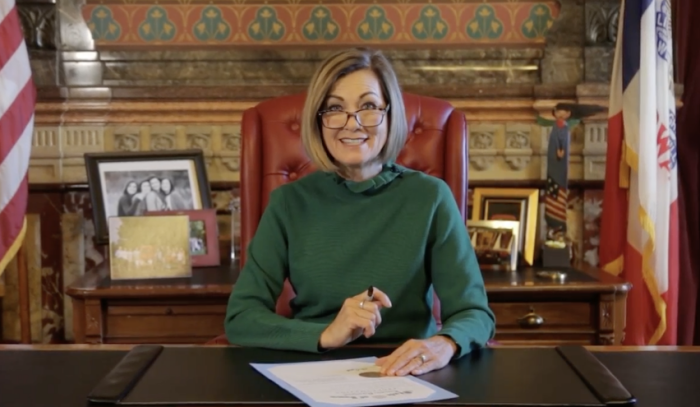 Three weeks after her re-election victory, Governor Kim Reynolds continues to avoid unscripted interactions with journalists. She has not held a news conference for 20 weeks, and her public appearances since the November election have not even built in "gaggles" where reporters could informally ask a few questions.

Reynolds cut off press conferences about four months before the 2018 midterm election as well, but during that year's campaign, she participated in three televised debates and pledged to hold weekly news conferences if elected. Though she didn't keep that promise, she provided several opportunities for reporters to ask about her plans soon after winning the 2018 race.

This year, Reynolds agreed to only one debate with her Democratic challenger and made no commitment regarding future news conferences. The governor's spokesperson Alex Murphy has not replied to Bleeding Heartland's questions about plans for media availabilities.

Since winning a second full term, Reynolds has steered clear of situations where journalists could ask her about matters of public concern, such as plans for next year's legislative session, or the administration's failure to pursue a $30 million federal grant for child care.

The governor's public schedule for the week of November 8 included only two events: a Veterans Day ceremony at the Iowa Veterans Cemetery in Adel, and a ceremonial puck drop at a minor-league hockey game in Des Moines. There would be no way for reporters to ask questions on camera at either location.

The governor's office did not release any public schedule for the following week.

Last week, staff announced two public events for Reynolds: the annual Christmas tree lighting at the state capitol, and an award presentation during the University of Iowa's football game the day after Thanksgiving. Her spokesperson told the Cedar Rapids Gazette the governor was "not expected to field questions at the tree-lighting event." A gaggle obviously could not happen at a packed football stadium.

In past years, Reynolds has sometimes taken a few questions from the press following her annual pre-Thanksgiving "turkey pardon." This time, she released a video to highlight the proclamation, saying the event could not be held in person due to the threat of avian flu. Her office didn't explain why they declined to set up a virtual press conference, like those Reynolds held during the first year of the COVID-19 pandemic.

The governor's latest public schedule went out at at 8:28 pm on November 28, with a single event listed for the entire week: serving breakfast at Central Iowa Shelter Services in Des Moines at 6:30 am on November 29. Even if news organizations could arrange for someone to cover tomorrow morning's outing (a challenge with only ten hours' notice), a shelter kitchen or cafeteria is not a convenient venue for getting close enough to ask question.

Although it's admirable to help serve a meal to unhoused people, it's not acceptable for a governor who has bragged about accessibility to be unavailable to reporters for months on end. Reynolds has held only fourteen press conferences since June 2021.

UPDATE: The governor paid a surprise visit to Mitchellville Elementary school on November 28 to honor Iowa's new teacher of the year. Since the event was not listed on any of Reynolds' public schedules, reporters were unable to approach her to ask any informal questions.

LATER UPDATE: During the month of December, Reynolds' public schedules included no news conference and only one informal media availability. That was supposed to take place after an award ceremony on December 16. However, the governor's office canceled that event and the media availability due to severe winter weather.

Also in December, Reynolds also became the first Iowa governor in some three decades to refuse to appear at a media forum previewing the legislative session, which was to take place during the first week of January.