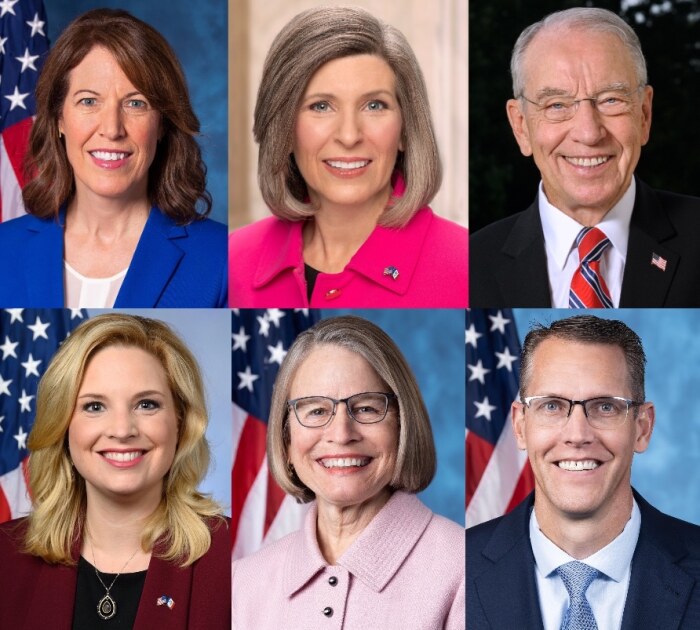 Every member of Congress from Iowa voted this week to force a five-year contract on the freight rail industry, as President Joe Biden had requested to avert a possible strike on December 9. It was the first time since the 1990s that Congress exercised its power to intervene in national rail disputes.

Four unions representing tens of thousands of rail workers had rejected the tentative agreement, which U.S. Labor Secretary Marty Walsh helped negotiate in September. The main sticking point was the lack of paid sick leave. Instead,

The deal gave workers a 24% raise over five years, an additional personal day and caps on health care costs. It also includes some modifications to the railroads' strict attendance policies, allowing workers to attend to medical needs without facing penalties for missing work.

The U.S. House voted 290 to 137 on November 30 to force adoption of the labor agreement as negotiated. Representative Cindy Axne (IA-03) was among the 211 Democrats who supported the bill, and Representatives Ashley Hinson (IA-01), Mariannette Miller-Meeks (IA-02), and Randy Feenstra (IA-04) were among 79 Republicans who voted yes as well.

A few minutes later, 218 Democrats and three Republicans approved a separate bill, which would provide seven paid sick days to all rail workers. Axne voted for that legislation, while the Iowa Republicans opposed it.

That second bill amounted to kabuki theater, since everyone knew it would never clear the U.S. Senate's 60-vote threshold. Indeed, when the upper chamber took up the rail legislation on December 1, a majority of 52 votes (including six from GOP senators) wasn't enough to pass the bill containing sick leave. Iowa's Senators Joni Ernst and Chuck Grassley voted no.

Senators also rejected a GOP proposal to provide a 60-day "cooling-off period and avoid congressional intervention in the dispute" before the December 9 deadline. Ernst was among the 25 Republicans who supported that idea; Grassley cast one of the 70 no votes.

The Senate then approved the House bill imposing the labor agreement by a vote of 80 to 15, with Iowa's senators in the bipartisan majority. The roll call shows a classic example of strange bedfellows: the no votes came from some of the most liberal members of the Democratic caucus (Bernie Sanders, Elizabeth Warren, Jeff Merkley) as well as some of the most conservative Republicans (Ted Cruz, Josh Hawley).

Biden promised in a December 1 statement, "I have long been a supporter of paid sick leave for workers in all industries – not just the rail industry – and my fight for that critical benefit continues." How will that "fight" go once Republicans gain control of the U.S. House next month? Even if Democrats win back the House in 2024 and Biden is re-elected, the GOP will likely win control of the Senate.

This was the president's chance to demonstrate that he supports the collective bargaining process and is willing to spend some political capital to secure paid sick leave for tens of thousands of Americans. He didn't want to risk any disruption to the supply chain during the holiday season.

Most of the Iowans in Congress did not release a statement about their votes on rail contract. Grassley indicated in a November 29 conference call that he planned to support the legislation, since a strike "would be devastating to agriculture."

Ernst and Hinson tried to have it both ways in public comments. Their written statements (enclosed in full below) blamed Biden for failing to negotiate a deal all parties could accept. Hinson endorsed "fair wages and benefits" in all industries. Ernst said “Workers need to be fairly represented and fairly treated," and cited rail workers' "valid concerns regarding quality of life and attendance policies, like failing to allow veterans to take Veterans Day off." Iowa's junior senator even said the president "sold out our rail workers."

Yet when Ernst and Hinson had a chance to vote for a better contract, including minimal paid sick leave, they voted no.

P.S.R. is an operational strategy that aims to minimize the ratio between railroads’ operating costs and their revenues through various cost-cutting and (ostensibly) efficiency-increasing measures. The basic idea is to transport more freight using fewer workers and railcars. [...]

Over the past six years, America’s major freight carriers have shed 30 percent of their employees. To compensate for this lost staffing, remaining workers must tolerate irregular schedules and little time off since the railroads don’t have much spare labor capacity left. [...]

Last year, the seven dominant North American railways had a combined net income of $27 billion, nearly twice their margin a decade ago. In the interim, the railways have collectively doled out $146 billion in dividends and stock buybacks while investing only $116 billion into their businesses. [...]

The freight carriers can afford to make concessions on pay. It isn’t that painful to increase wages by a sizable amount when you’ve recently slashed your head count by 30 percent (and hope to continue innovating your way to a smaller payroll in the years to come). But providing rail workers with ordinary time-off benefits would threaten the industry’s core business strategy, an operating procedure that has helped to nearly double its profits over the past decade.

The federal government should not be rewarding that business strategy at the expense of workers. But that's what just happened.

On Tuesday, I met with Congressional leaders from both parties and told them that Congress needed to move quickly to avert a rail shutdown and economic catastrophe for our nation. Now, I want to thank Congressional leadership who supported the bill and the overwhelming majority of Senators and Representatives in both parties who voted to avert a rail shutdown. Congress’ decisive action ensures that we will avoid the impending, devastating economic consequences for workers, families, and communities across the country. Communities will maintain access to clean drinking water. Farmers and ranchers will continue to be able to bring food to market and feed their livestock. And hundreds of thousands of Americans in a number of industries will keep their jobs.  I will sign the bill into law as soon as Congress sends it to my desk.

Working together, we have spared this country a Christmas catastrophe in our grocery stores, in our workplaces, and in our communities.

I know that many in Congress shared my reluctance to override the union ratification procedures.  But in this case, the consequences of a shutdown were just too great for working families all across the country. And, the agreement will raise workers’ wages by 24%, increase health care benefits, and preserve two person crews.

I have long been a supporter of paid sick leave for workers in all industries – not just the rail industry – and my fight for that critical benefit continues.

This week’s bipartisan action pulls our economy back from the brink of a devastating shutdown that would have hurt millions of families and union workers in countless industries. Our economy is growing and inflation is moderating, and this rail agreement will continue our progress to build an economy from the bottom up and middle out.

WASHINGTON – U.S. Senator Joni Ernst (R-Iowa) issued the following statement with regard to the Senate’s action to prevent a rail strike:

“The ongoing uncertainty over the last weeks and months has been disruptive and problematic. A robust, effective, and efficient rail industry should benefit all Americans. President Biden could and should have done more to ensure a fair deal – for workers and all Americans. This is another example of President Biden failing. He passed the buck to Congress, and sold out our rail workers.

“Many of my former Iowa National Guardsmen, friends, and family, including my brother, work for the railroads. I know the frustration they are feeling from their union leadership, the rail companies, and the Biden White House. They have valid concerns regarding quality of life and attendance policies, like failing to allow veterans to take Veterans Day off.

“Workers need to be fairly represented and fairly treated. This deal made by union bosses and railroad executives was rejected by tens of thousands of workers. This should have been resolved at the negotiating table, in good faith, by all parties, and not by Congress.

“No one wins when the railroads stop running. I recognize that a strike combined with existing challenges in the rail system, stretched supply chains, and bad economic times – brought on in large part by Democrats’ reckless spending — would not only be catastrophic for American families, farmers, and businesses, but also a national security threat.

“This deal isn’t perfect. Far from it. I would have much preferred these groups be forced to go back to the table, for the administration to do their job, and keep Congress out of it. I could not in good conscience allow a $2 billion a day strike to leave farmers without access to markets, critical materials stranded, and stores bare. I supported the adoption of the tentative agreement – but I want the record to stand, I strongly believe it should never have come to this.”

Workers deserve fair wages, benefits, and good working conditions. This is even more important as families are struggling to pay the bills during this time of record inflation -- all workers are feeling the pain brought on by the Biden economy. President Biden failed to negotiate an agreement, allowing a rail strike to loom that would lead to thousands of lay-offs around the holidays, cost our economy $2 billion per day, upend our supply chain, and worsen inflation. I supported legislation to avert this latest Biden catastrophe, and will continue working to solve the challenges we’re facing, ensure workers in all industries have fair wages and benefits, and get our economy working for everyone again.”