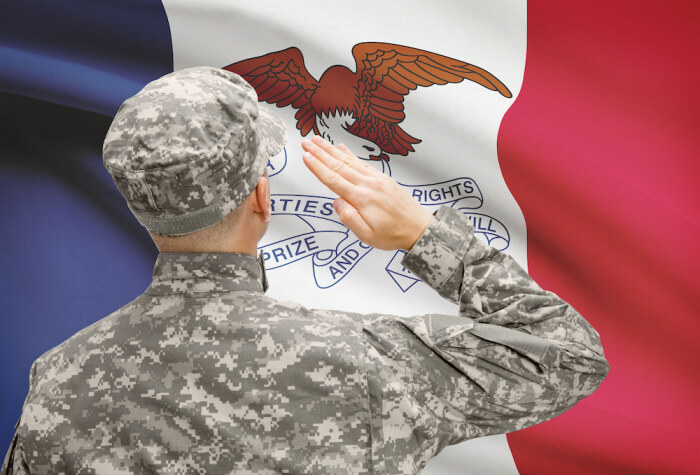 In politics, having a “trifecta” in government is a good thing for a political party—until the trifecta’s inaction on some popular issue starts to haunt those in power.

Iowa Republicans served up an example of the consequences of such inaction in the days leading up to Christmas. This story involves military veterans, a highly sought-after constituency that is part of any solid political movement.

A trifecta means the party usually has an easy time getting its policy priorities approved by lawmakers and signed into law by the governor—Republican priorities like big tax cuts. It means the party’s control of those three key elements of the government generally can stop legislative action on proposals its members oppose—such as the Democrats’ efforts to improve water quality across Iowa.

But there is a downside to having that firm grip on state government. We are seeing that this winter, since the Iowa Veterans Trust Fund ran out of money and had to stop providing financial aid to lower-income veterans and their families.

The news was like a lump of coal in veterans’ Christmas stockings. The irony in this unnecessary turn of events is that we have emerged from an election campaign when Republican candidates were eager to be seen with veterans and to signal their support for the men and women who have served in our military forces.

But Republican leaders in the Iowa legislature, along with Governor Kim Reynolds, dropped the ball this time. They were fixated during the 2022 legislative session on creating taxpayer-funded tuition vouchers for Iowa parents who want to send their children to private K-12 schools.

The House and Senate adjourned for the year on May 24 without taking final action on a proposal from the Iowa Commission on Veterans Affairs to increase the tax money going into in the trust fund.

When you look at the state general fund, which totals $7.8 billion, the size of the proposed increase in the veterans trust fund was minuscule, the proverbial couch cushion money.

Iowa Public Radio's Catherine Wheeler broke the news last month about the depleted trust fund, which was established about 20 years ago to assist Iowa veterans in need and their families. To qualify, an individual veteran cannot make more than about $41,000. A veteran’s family of three cannot have more than $69,000 in income.

As Erin Murphy reported for the Cedar Rapids Gazette, the biggest source of money for the trust fund is the $2.5 million each year that comes from Iowa lottery profits. The legislature allocates an additional $500,000 from the general fund in there each year, too.

But with more people now eligible for the trust fund’s assistance and because inflation has driven up expenses for veterans and their families, officials with the Iowa Commission on Veterans Affairs asked the legislature in early 2022 for a general fund appropriation of $800,000 (an increase of $300,000) for fiscal year 2023, which runs through June 30.

The higher appropriation never came up for a final vote by lawmakers. It was not a matter of state government being unable to afford the additional money for the trust fund. The state general fund ended fiscal year 2022 with a positive balance of about $1.9 billion. Remember, the trust fund was seeking $300,000 more than it customarily received each year.

Do not let the size of those numbers confuse you. Think of the $7.8 billion state general fund budget in terms of a typical Iowa family that earns $50,000 a year. That $300,000 increase for the trust fund is the equivalent of our typical family having to come up with $1.92.

The lapse by the Republican trifecta had real world consequences for lower-income veterans. KCCI-TV's James Stratton reported last week that because the trust fund ran out of money, one veteran will have to wait until next summer, when fiscal year 2024 begins on July 1, before he can get assistance from the fund for emergency repairs to his roof. Another will have to wait to pay for lawmakers to replenish the trust fund in 2023 before getting dentures.

This problem did not sneak up on state leaders like some fast-moving winter storm. They had been warned—but they chose to do nothing.