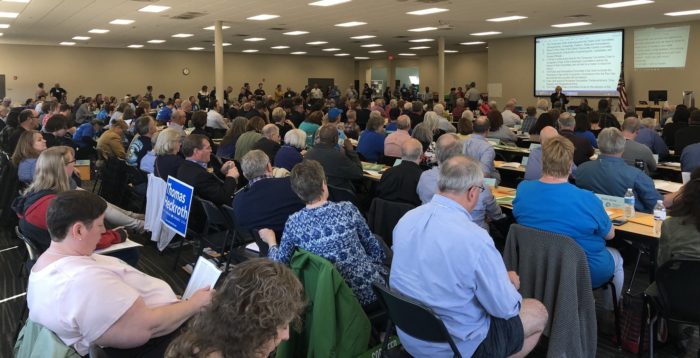 Both major parties held district conventions on April 28. One encouraging sign from the Iowa Democratic Party’s proceedings: activists are much more energized this year than usual. Every delegate slot was filled in all four Congressional districts. Quite a few alternates (including myself) did not receive credentials. According to former State Senator Jack Hatch, it was only the second time in 40 years that an IA-03 district convention “packed a full slate of delegates.” State party chair Troy Price observed in a Facebook post, “Typically, in a non-Presidential year it is a struggle to reach quorum, and this year we had more people than spots available.”

All of the district convention delegates elected at county conventions in March are automatically delegates for the state conventions in June. So the main order of business yesterday was choosing members of each party’s State Central Committee.

Both Democrats and Republicans will have lots of new faces on their governing bodies. But Democrats mostly missed an opportunity to elect leaders who reflect the diversity of the party’s base.

Iowa’s Republican National Committeewoman Kim Lehman stood by her false assertion about President Barack Obama’s faith yesterday. As Bleeding Heartland discussed here, Lehman claimed last week that Obama “personally told the muslims that he IS a muslim. Read his lips.” Sam Stein of the Huffington Post asked Lehman to clarify and got this response:

“I was watching television when he was over there talking to the Muslim world and he made it, in my opinion, clear he was partially Muslim,” Lehman told the Huffington Post. “The way he was approaching that speech was, ‘Hey I’m one of you. I’m with you.’ He didn’t have to say that… but he did.” […]

“Again, going back to his speech… he would have said I’m a Christian and I’m from the Christian religion and we can work together. It didn’t appear to me he said Christianity was part of his religion.”

But oops! Stein looked up the transcript of Obama’s June 2009 speech in Cairo and found this:

Now part of this conviction is rooted in my own experience. I’m a Christian, but my father came from a Kenyan family that includes generations of Muslims. As a boy, I spent several years in Indonesia and heard the call of the azaan at the break of dawn and at the fall of dusk. As a young man, I worked in Chicago communities where many found dignity and peace in their Muslim faith.

This morning, Lehman said she was referring to an Obama speech in Cairo last summer in which he reached out to Muslims “to seek a new beginning.” In that speech, he makes no comment about being Muslim, a transcript shows.

Lehman said she objected to Obama’s speech because “it just had a sense of embracing or aligning with the Muslims. I don’t know. It was unnecessary the stuff he said. That’s the whole point.”

Lehman said she would never give anyone the impression that she is anything but a Christian.

“I don’t give myself an appearance to the Muslims that I am aligning myself with the Muslims. I am strictly a Christian. I believe that. I stand by that. I’ll die by that,” she said.

Jason Hancock noted at Iowa Independent that this isn’t the first time Lehman has used her twitter account to claim Obama is Muslim. According to Stein, though, she may be “the first [Republican] national committee member to fully endorse the Obama-is-a-Muslim view.”

Lehman told Politico to read Obama’s lips regarding his faith. She should take her own advice. She ignores the president’s numerous public statements about being a Christian because in her opinion, one speech “had a sense of embracing or aligning with the Muslims.” Republicans should be embarrassed to have one of their leaders pushing conspiracy theories, and it’s a sad comment on the Iowa GOP that no one stepped up to counter Lehman’s view.

Speaking of poor form, neither Stein nor Jacobs linked to this blog, which was the first to report on Lehman’s comments about the president’s faith.

UPDATE: The Iowa Democratic Party cited Lehman’s comments in a fundraising e-mail, which you can read here. Todd Dorman posted a funny take on this episode too.

Krusty Konservative feels Lehman is “not helping the Republican cause.”

You come across the strangest things on Twitter sometimes:

Yes, it’s delusional to believe Politico is in the game to “protect” Barack Obama, but for now I’m more interested in Republican National Committeewoman Kim Lehman’s claim that the president is Muslim. Presumably she was responding to Tim Grieve’s August 19 report for Politico on the latest Pew survey about the president’s religion. Pew found that about 18 percent of American adults say Obama is Muslim, while about 34 percent say Obama is Christian. About 34 percent of those who identified themselves as conservative Republicans told Pew Obama was Muslim. Grieve’s report referred to “a dramatic spike in false views about the president’s religious faith.” Politico’s Josh Gerstein also reported on the Pew finding, as well as a Time magazine survey which (using different wording) found even higher numbers of Republicans believe the president is Muslim.

Neither Lehman nor anyone else would claim Republican gubernatorial candidate Terry Branstad’s not really a Christian because his mother was Jewish. Yet for some reason, it’s not enough for Lehman that Obama has been baptized, regularly attended Christian churches for many years and was sworn in on a Christian bible.

I wonder how many other prominent Iowa Republicans believe the urban legend about Obama being Muslim. Representative Steve King recently claimed Obama is a “Marxist” who “surely understands the Muslim culture.” What about Senator Chuck Grassley, Representative Tom Latham and Republican Congressional candidates Ben Lange, Mariannette Miller-Meeks and Brad Zaun?

State party chairman Matt Strawn and Steve Scheffler, head of the Iowa Christian Alliance, are Iowa’s other two representatives on the RNC. Do they and members of the Iowa GOP’s State Central Committee share Lehman’s view?

Branstad’s own interfaith family background makes him an ideal person to speak publicly about religion as a matter of faith and an individual’s spiritual journey, as opposed to a genetic inheritance. But I’m not holding my breath for Branstad to dispel false rumors about Obama. He generally avoids taking any position that would anger conservatives–when he’s not kowtowing to far-right sentiment, that is.

Gingrich to train Republican candidates next week in Des Moines

Former U.S. House Speaker Newt Gingrich is bringing a candidate training workshop to Des Moines on Monday, July 12, Kathie Obradovich reported on her Des Moines Register blog today. Gingrich’s organization American Solutions is running the workshop, and that group’s CEO Joe Gaylord will accompany Gingrich on the trip. According to a press release, Gaylord has written a campaign manual geared toward “candidates at all levels, from local to Congressional, and for everyone in the campaign, from the candidate to the press secretary.  Each chapter of Campaign Solutions starts with how-to advice, and ends with what-not-to-do warnings and how-did-you-do scorecards.” Gingrich and Gaylord are also “distributing a weekly podcast to candidates similar to the GOPAC education tapes that helped prepare a generation of GOP candidates for the campaign trail.”

I’m guessing Gingrich and Gaylord won’t advise candidates to spend 15 percent of the money they raise on chartered private air travel, as American Solutions did in recent years.

Gingrich came to Iowa in late May to raise money for several Republican organizations. Teaching candidates how to run professional campaigns will generate more goodwill among Iowa politicians who could be helpful to Gingrich if he runs for president in 2012. Even if Gingrich doesn’t seek the presidency, his influence over Iowa Republicans’ policy agenda may increase. American Solutions runs an “online information portal” that “breaks down policy problems and presents solutions lawmakers can utilize to create jobs, improve education and expand American energy.” Tax cuts that benefit corporations and wealthy individuals are the centerpiece of Gingrich’s action plan.

I wonder if any reporters will ask Gingrich about the unethical practices American Solutions employs to raise money from the conservative grassroots. Mark Blumenthal of Pollster.com characterized a phone pitch I received last year as “a clear cut example of fundraising under the guise of a survey (‘FRUGGing’)”. The Marketing Research Association considers FRUGGing unethical because

The use of a poll to conduct fund raising has raised the distrust of the public to a point where they refuse to cooperate with researchers trying to obtain the opinions of any number of issues, including political campaign, and government: federal, state and local research. In a country inundated with telemarketing and direct mail fund raising it is more and more difficult for marketing and opinion researchers to get accurate data.

Competitive primaries helped Iowa Republicans make “significant” voter registration gains between June 1 and July 1 of this year, Iowa Secretary of State Michael Mauro announced at a press conference today. Voter registration totals as of June 1 (pdf file) were 710,017 Democrats, 607,567 Republicans and 772,725 no-party voters. As of July 1, registered Democrats were down to 699,972, Republicans were up to 644,838, and no-party voters were down to 749,441. A press release from the Secretary of State’s office noted that “these totals include both active and inactive voters.”

Iowa law allows voters to change their registration on the day of a primary or general election, and there were many more competitive races on the Republican side this year. It appears that approximately 10,000 Democrats and 23,000 independents became Republicans in order to vote in the GOP primary on June 8. Mauro remarked that Republicans gained in voter registration in 2002, when three men sought the nomination for governor and two sought the nomination for U.S. Senate. By the same token, the number of registered Democrats increased substantially in 2006, when Chet Culver was running against Mike Blouin and Ed Fallon while Jim Nussle was unopposed for governor on the GOP side. But Mauro “couldn’t deny that the momentum is on the GOP side.”

Not every party-switcher is a guaranteed Republican vote in November. Some Democrats may have voted for the perceived weaker Republican candidate for governor, and I’ve known independents who vote in whatever primary is competitive, no matter whom they plan to support in the general. Nevertheless, it’s not good for the Iowa Democratic Party’s voter registration advantage to shrink by such a large amount, particularly since it will be challenging to turn out many of 2008’s new voters, who were mobilized by Barack Obama’s campaign. Approximately 1.5 million Iowans voted in November 2008, but only about 1.05 million voted in November 2006. I will be surprised if turnout this November exceeds 1.1 million.

Iowa Democrats’ ability to execute their early voter program will be critical again this year. Strong early voting has saved several Iowa House and Senate seats the last few cycles. But voter mobilization can only do so much if there is a large enthusiasm gap between the parties. I also hope that Culver’s campaign has a game plan for bringing the dissatisfied Democrats home in November.

UPDATE: John Deeth doesn’t think the registration gains are anything to brag about, because they grew out of a divisive, still-unresolved primary.

Terry Branstad made it official this morning, picking State Senator Kim Reynolds to be the Republican candidate for lieutenant governor. Reynolds is a former Clarke County treasurer and past president of the Iowa county treasurer’s association who was elected in 2008 to represent Senate district 48 in southern Iowa. The Des Moines Register’s Tom Beaumont published more background on Reynolds here. His piece depicts her as “solid on core GOP issues” and “focused on economic development.”

Looks like Branstad has picked precisely the kind of candidate his former chief of staff Doug Gross would want on the Republican ticket.