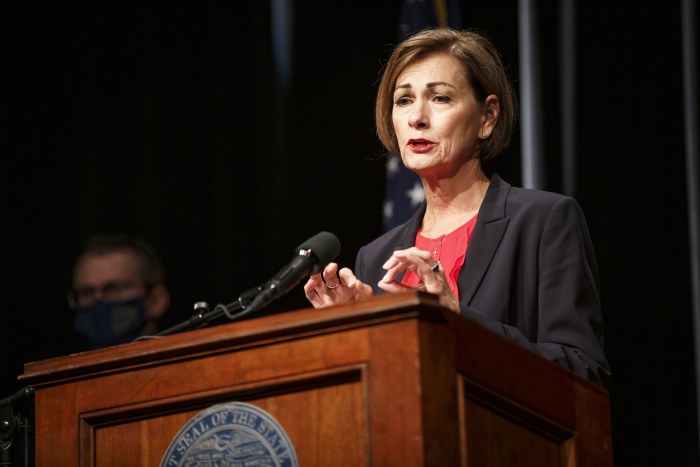 Kim Reynolds set young people up to fail. Now she's setting them up to blame

“Much of the spread that we’re seeing in Iowa continues to be tied back to young adults” between the ages of 19 and 24, Governor Kim Reynolds said during an August 27 news conference, where she announced a new proclamation closing bars in Polk, Dallas, Linn, Johnson, Story, and Black Hawk counties.

Reynolds noted that young adults are spreading coronavirus to classmates, co-workers, and others “by socializing in large groups” and “not social distancing.” She added, “While we still know that this population is less likely to be severely impacted by COVID-19, it is increasing the virus activity in the community, and it’s spilling over to other segments of the population.”

The official narrative seems designed to conceal three inconvenient facts. Reynolds didn’t follow expert advice that could have prevented this summer’s explosive growth in cases. For months, she discouraged young, healthy Iowans from worrying about the virus. And despite her “#StepUpMaskUp” public relations campaign, Reynolds has failed to practice what she preaches when attending large gatherings herself.

Terry Branstad passed over some better-known and better-connected Republicans when he picked State Senator Kim Reynolds to be his running mate in 2010. During that campaign, Branstad said he was looking for a lieutenant governor who could take his place. He made clear on many subsequent occasions that he was “grooming” Reynolds. The plan will come to fruition after Branstad is confirmed as U.S. ambassador to China.

Few Iowans outside Clarke County had heard of Reynolds in June 2010, but Branstad had taken an interest in her political career long before then. If his original plan had worked out, Reynolds would have been elected to the Iowa Senate for the first time on this day in 1999.

From a liberal’s perspective, Bruce Rastetter is the closest thing Iowa has to a James Bond villain. After making his fortune off a polluting industry (large-scale hog confinements), Rastetter provided the “seed money” for the 501(c)4 group American Future Fund, which quickly became one of the most influential conservative dark money groups, a “prolific funder” of negative ads often “deemed false.” In 2009, Rastetter played a key role in coaxing Terry Branstad out of political retirement. He then parlayed his status as the top donor to Branstad’s 2010 gubernatorial campaign into an appointment to the prestigious Iowa Board of Regents. Thanks to a little intervention from the governor, Rastetter moved quickly into a leadership position on that board, where he “blurred the line” between business and board work, hoping to expand one of his corporations’ land holdings on another continent. Last month, Rastetter made news as the apparent mastermind behind hiring business executive Bruce Harreld as president of the University of Iowa, over strong objections by stakeholders on campus.

A certain type of Republican is as attracted to Rastetter’s power as many Democrats are repelled by it. The “quiet but fierce” Rastetter is a top donor to GOP establishment candidates and committees in Iowa. He dislikes the “kingmaker” label often attached to him, but who else could get the governor, lieutenant governor, both U.S. senators, three U.S. House members, and nine presidential candidates to show up for an event in its first year, the way Rastetter did for his Iowa Ag Summit in March?

Rastetter says he donates to candidates to “make a difference,” not to “get access.” Whatever his motives, he has tremendous influence. Governor Branstad said earlier this year that he keeps in touch with Rastetter “at least once a week” and “greatly” values the businessman’s opinions. So do some other high-dollar Republican donors, who flew with Rastetter to New Jersey in 2011, hoping to recruit Governor Chris Christie to run for president. Last week, most of those business leaders stood with Rastetter again to endorse Christie’s presidential bid. The event in Des Moines capped a good couple of months for Christie here in recruiting backers from the Iowa GOP establishment.

How much will those endorsements help the New Jersey governor win over rank and file Iowa Republicans who show up at precinct caucuses?

Looking through Governor Terry Branstad’s latest set of appointments and nominations, I was again struck by how many former Iowa House and Senate members end up on state boards and commissions. I remember Governors Tom Vilsack and Chet Culver appointing lawmakers to high-profile jobs too, but the trend seems more pronounced under the current governor. Background and details on the new appointees are after the jump.

How not to retire from the Iowa legislature (revisited)

A few months ago, Bleeding Heartland criticized the practice of longtime Iowa legislators announcing their retirements within a day or two of the filing deadline for primary candidates. Too many incumbents in both parties have pulled that stunt over the years. Respect for one’s constituents demands giving people outside a small circle of party activists a few weeks, or ideally a few months, to consider running for the Iowa House or Senate.

Yesterday, State Representative Henry Rayhons demonstrated an even worse way to retire from the Iowa legislature. Just eleven days before the deadline for getting a candidate on the general election ballot, the nine-term Iowa House Republican announced that he would not seek re-election, citing “ongoing family and health matters.” Rae Yost reported for the Mason City Globe-Gazette that the Rayhons family “has been dealing with issues regarding appointment of a guardian and conservator” for the 78-year-old lawmaker’s wife.

Rayhons should have announced his retirement earlier this year, anticipating that he would be unable to serve another two-year term. Then other Republicans could have competed in a primary to represent Iowa House district 8, covering part of Kossuth County and all of Hancock and Wright counties. Now only a handful of GOP activists will have a say in choosing Rayhons’ successor. They need to convene a nominating convention in the middle of vacation season and the Iowa State Fair. The GOP nominee will face Democrat Nancy Huisinga in a district that strongly favors Republicans in voter registrations and presidential voting in 2012.

Arguably, Rayhons should have stepped aside gracefully three years ago, after Iowa’s new map of political boundaries threw him and two House GOP colleagues into House district 8. Instead, House Majority Leader Linda Upmeyer moved to the Clear Lake area to run in House district 52. It made no sense for Upmeyer to defer to an eight-term backbencher like Rayhons when doing so meant bigfooting Gabe Haugland, the ambitious young Republican who was already planning to run in HD-52. Everyone could see that Rayhons didn’t have a long political career ahead of him and wasn’t a key member of the House GOP caucus. We haven’t seen the last of Haugland, who was elected to the Iowa GOP’s State Central Committee earlier this year. But he could be seeking a second term in a safe Iowa House seat by now if Rayhons had allowed Upmeyer to stay in HD-08.

I’m glad there is no mandatory retirement age for Iowa legislators, but sometimes our older incumbents are too reluctant to step aside for a younger generation.

UPDATE: I was sorry to hear that Donna Lou Young Rayhons passed away on August 8.