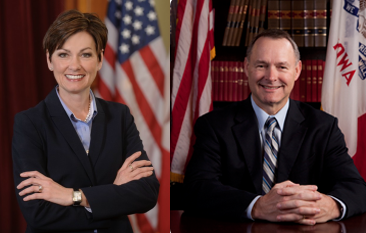 Michael Fitzgerald has seen tight budgets come and go in his 35 years as state treasurer. He is increasingly concerned that Iowa may have trouble making ends meet next spring.

Only a few months into her new job, Governor Kim Reynolds plans to reject Fitzgerald's considered opinion. The political gamble allows her to downplay the severity of Iowa's fiscal situation for now. However, her strategy could backfire if a cash-flow problem blows up just before the final stretch of next year's primary campaign.

During the fiscal year that ended June 30, revenues fell well short of projections, even after big mid-year spending cuts.

Managing the state's cash flow and investing its operating funds have been part of Fitzgerald's job for decades. The treasurer knows how close Iowa came to not being able to meet its obligations a few months ago. In this outstanding investigative report, the Des Moines Register's Brianne Pfannenstiel showed that the state "didn't have enough cash" in 2017 to pay tax refunds "at the same pace as in previous years."

Branstad/Reynolds administration officials claimed that new policies "to prevent identity theft and fraud" caused the tax refund delays. But Fitzgerald was blunt: "The state could not have made those payments" on the usual schedule, and “We were underwater" during 11 days in April, lacking the cash reserves to cover what was owed to taxpayers.

In early May, Fitzgerald warned that the crunch could become worse next spring. Responding to claims by some Republicans that a Democratic treasurer was trying to undermine a GOP governor, he told the Register's William Petroski,

"The cash-flow issue is a serious concern. If they are going to totally ignore it and call it a political problem, that is whistling by the graveyard," Fitzgerald said. He noted that the state treasury had a surplus of more than $900 million in recent years that has since evaporated and that the state's budget was cut by lawmakers this year amid repeated declines of projected state revenues.

"I think any reasonable person would say that cash flow is touch-and-go, and they should be concerned about it," Fitzgerald said. [...]

"Not paying school aid on time next year in March and April is something we had better be paying attention to," Fitzgerald said."I am not saying it is something that can't be done, but we are not too far off from having a real problem."

Reynolds administration officials touted a report by Moody's Investors Service in June, which concluded that "The state still has ample budgetary reserves [...] Even after drawing on reserve funds to close a late-year budget gap, its rainy day funds will total more than $500 million or about 7 percent of revenues." Nevertheless, Fitzgerald suggested short-term borrowing might be prudent.

Fitzgerald said he and former Gov. Terry Branstad, a Republican, had agreed in the past to borrow money at tax-exempt rates and to sell short-term bonds at market rates.

That has allowed the state to break even or make a profit through a process known as arbitrage, he said.

"Hopefully, Gov. Reynolds won't have to call a special [legislative] session, but it is hard to believe it wouldn't make sense to do cash-flow borrowing. But I wouldn't do it unless Gov. Reynolds agreed," Fitzgerald said.

As it happens, Reynolds will almost certainly have to call a special session this fall, so Republican lawmakers can approve shifting another $104 million or so from the cash reserves to balance the fiscal year 2017 budget. Last week, Fitzgerald raised the prospect of short-term borrowing again, O.Kay Henderson reported for Radio Iowa.

“It’ll be borrowing in September, paying it off before the end of the year, so it doesn’t add to the state debt and, if we borrow early by what’s known as arbitrage, we can make money on the money we don’t use to pay for borrowing,” Fitzgerald says, “so it doesn’t cost us anything. It just ensures the state can pay its bills on time. That’s all it does.” [...]

“I want to just assure Iowans we have almost half a billion dollars in cash reserves. I don’t think this is a time when we need to be short-term borrowing, ” Reynolds says. “I don’t think it’s necessary.” [...]

“I want to just reassure all Iowans that our bills are being paid and have been paid and are being paid,” Reynolds says. “…We’re continuing to collect the facts. We’re doing the due dilligence that we need to be doing so that we can make an informed decision on the procedures moving forward.”

Deputy Treasurer Stefanie Devin told me today that the Treasurer's Office still plans to submit a short-term borrowing proposal to Reynolds. "We would anticipate issuing notes in the fall," guaranteeing a certain interest rate to the bondholders, with the goal of investing the money "at just a slightly higher percentage than the interest that we're paying out, to cover the cost of the borrowing." She confirmed that Fitzgerald would not go down this road against the governor's wishes. "This is always something that we've done in cooperation with the governor's office and the Department of Administrative Services."

Jon Muller, who closely follows state finances and expects revenues to continue to fall below projections during the current fiscal year, told me,

Short term rates have come up enough that they'll be able to issue TRANS notes (Tax and Revenue Anticipation Notes) with positive arbitrage. [...] the State will probably make money on the deal. With some careful cash management, the Treasurer is doing the State a favor by demonstrating a shortfall if at all possible. Fitzgerald's been doing this for nearly 35 years. The Governor would do well to be quiet and thought a fool. He knows what he's doing.

What's the downside to borrowing now, especially if doing so costs next to nothing? Worst-case scenario, Iowa ends up not needing the money. Maybe the state's cash reserves will hold up better than Fitzgerald fears. Maybe revenue estimates will stay on track during fiscal year 2018, in contrast to what happened in several stages this past year.

The case against short-term borrowing is purely political. Last week, rival Republican gubernatorial candidate Ron Corbett sharply criticized Reynolds for transferring money from the state's cash reserves to cover ongoing expenses. In talking points he is sure to repeat all over Iowa for the next nine months, Corbett accused Reynolds of borrowing more money than Democratic Governor Chet Culver.

Even though the short-term borrowing Fitzgerald proposes is completely different from taking more money out of the cash reserves, most voters would not learn about the technicalities. The headline news would be that Iowa is borrowing money to stay afloat--a bad narrative for Reynolds.

The Russians have an expression: hope for the best, but prepare for the worst. Reynolds seems content to stick with the first part.

But what if the gamble doesn't pay off? Given this year's delayed tax refunds, Iowa reporters will scrutinize state finances in the spring, looking for any sign of trouble covering school aid or other expenses. A cash-flow problem in March or April would hit just in time for Corbett to run television commercials about his leadership skills and the incumbent's mismanagement.

He's been laying the groundwork, not only with his recent comparison of Reynolds to Culver. Here's the mayor in July, shortly after non-partisan legislative analysts revealed the state ended fiscal year 2017 in the hole.

“This was predictable and preventable. Last summer, people knew that the farm economy was soft,” Corbett says. “…But instead of taking action last summer, they took a ‘wait and see’ attitude and all that did was delay the problem. There’s a cost to delay.”

Corbett says rather than make strategic cuts in the state budget last summer, the only option left for Reynolds and Republican lawmakers is to use the state’s cash reserves to cover the budget deficit. [...]

A Legislative Services Agency analysis indicated the state was 104 million dollars short when the budgeting year ended June 30th. Some taxes that were owed before June 30th are still trickling in, though. Reynolds has said she’ll wait until the end of September to see how big the final deficit number is. Corbett, a former speaker of the Iowa House, says the governor’s “unilateral decisions” mean Reynolds is “boxing out” input of the legislative branch.

“It seems to me that we have this culture of indecision developing in the governor’s office where they really don’t know what to do,” Corbett says.

Saying no to Fitzgerald will protect the governor from a few bad news cycles this fall. But if time bears out the treasurer's warning, Reynolds will have validated Corbett's message about the hidden costs of a "culture of indecision."