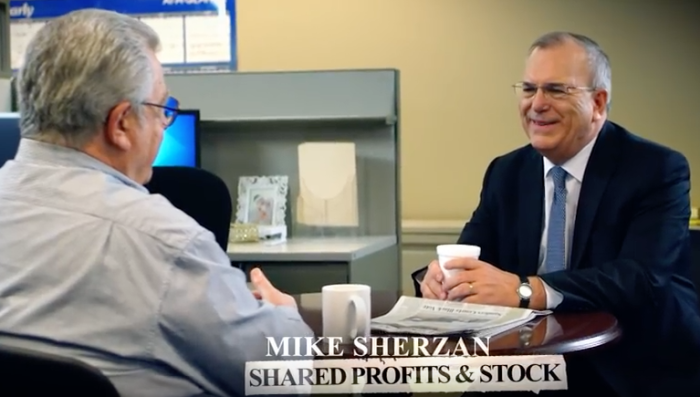 Many candidates point to successful careers to communicate their leadership or management skills. Mike Sherzan, one of three Democrats seeking the nomination in Iowa's third Congressional district, is highlighting his experience as founder and chief executive of a financial services firm in order to show that he values hard work and putting people first.

Last Friday, Sherzan became the first candidate in IA-03 to start running television commercials. I enclose below his introductory spot and latest direct mail, which build on his earlier promise to be "a voice for hardworking families."

UPDATE: Have added the second tv ad for Sherzan, which launched on April 26 and hits similar themes, with a focus on treating women fairly in the workplace.

Before making his Congressional campaign official, Sherzan said he hoped Democrats would not "judge my positions based on my business experience" in the finance world, emphasizing that ""government was never meant to be a business."

As a way of illustrating Sherzan's unusual approach to running his company, his campaign's first direct mail piece talked about his choice to "put my employees ahead of profits" and sell the firm to employees rather than to out-of-state investors when he decided to retire. Those themes are the centerpiece of the candidate's introductory tv ad. "Start" began running on April 22:

Female voice-over: Hard work gave Mike Sherzan his start. [camera pans over old family photos from Sherzan's childhood and a copy of the Des Moines Register from 1990, showing a picture and feature about Sherzan on the front page of the Metro Business section; words on screen DEMOCRAT MIKE SHERZAN]

Valuing those who work hard is how he built a different way of doing business. [footage and photos of Sherzan with various employees; DEMOCRAT MIKE SHERZAN still visible near bottom of screen]

Mike shared his profits and company stock with employees every year. [footage of Sherzan in office with employees; words on screen MIKE SHERZAN SHARED PROFITS & STOCK]

Now he's retiring, and instead of selling out to Wall Street, Mike is selling the company to his employees [more footage of Sherzan speaking with employees in office setting; words on screen MIKE SHERZAN EMPLOYEE OWNED BUSINESS]

Politicians say they'll put people first, but only Mike Sherzan has actually done it. [footage of individual employees at Sherzan's company, then scene of him walking down hallway talking with employees; paid-for message near bottom of screen]

Sherzan's voice: I'm Mike Sherzan, and I approve this message. [footage of Sherzan sitting at a board room table, talking with employees; words on screen DEMOCRAT MIKE SHERZAN CONGRESS]

Sherzan's second mailing to IA-03 Democrats related the candidate's respect for hard work, rooted in his upbringing. The front featured old family photos: "Their generation valued hard work and service. So should ours."

The interior connected his family and career experiences with his commitment to fight for policies to benefit working people:

Every generation should be rewarded for hard work.

My father died unexpectedly when I was a junior in college. My mom insisted we use his Social Security death benefit to finish paying my tuition.

I'LL ALWAYS FIGHT TO PROTECT SOCIAL SECURITY. I KNOW WHAT IT MEANS TO THOSE WHO DEPEND ON IT MOST.

At my company, I paid women equal wages and promoted them to the highest levels because they earned it.

IN CONGRESS, I'LL WORK TO MAKE SURE THAT EVERYONE EARNS EQUAL PAY FOR EQUAL WORK AND HAS THE OPPORTUNITY TO ADVANCE.

Unlike most of the businesses in my industry, I made my employees part owners by giving them stock every year, and shared my profit by making annual contributions to every employee's retirement account, on top of their 401(k) benefits.

MY EMPLOYEES MADE MY COMPANY SUCCESSFUL AND DESERVE THEIR FAIR SHARE OF THE PROFITS.

When I retired, I turned down offers to sell out to Wall Street--I'm selling my company to my employees instead.

I'LL WORK TO END CORPORATE TAX LOOPHOLES THAT ONLY HELP THE RICH AND WILL CUT TAXES FOR MIDDLE-CLASS FAMILIES WHO HAVE EARNED IT.

The back page highlighted Sherzan's growing up in a family of modest means:

I WAS RAISED ON THE EAST SIDE OF DES MOINES.

My parents worked as a secretary and a washer and dryer salesman. By 1953, my father had saved enough money to build us a house, the first one we lived in that had indoor plumbing. It was a time when hard work earned respect and a better life.

THOSE VALUES HAVE BEEN LOST IN WASHINGTON. I'LL WORK TO BRING THEM BACK.

The third direct mail piece from Sherzan hit on several of the same points. They must have tested very well in the campaign's internal poll last month.

Front of mailer: "THERE'S NOTHING I RESPECT MORE THAN HARDWORKING IOWANS."

My loyalty has always been to people who have earned it through hard work--not to people with deep pockets. That's why I paid women the same as men for doing the same jobbed why I implemented profit sharing and an employee stock ownership plan for everyone at my company. They earned it.

When I retired, I turned down the offer of a Wall Street buyout, and I am selling my company to my employees here in Iowa.

MY LOYALTY ISN'T FOR SALE. MY VOTE WON'T BE EITHER.

Unidentified female voice: I work the same hours [footage of a woman working at a desk in the office of Sherzan's company]

Second female voice: I have the same title as the guy in the office next door. [footage of two other women working at computer screens]

Third female voice: And because I work for Mike Sherzan, [footage of Sherzan talking with employees; words on screen DEMOCRAT MIKE SHERZAN]

Voice of first woman who spoke in ad: and made sure promotions were based on performance. [footage of Sherzan speaking with second woman shown in ad, then the first woman from the ad speaks directly to the camera; words on screen MIKE SHERZAN PROMOTIONS BASED ON PERFORMANCE]

Fourth woman speaks to camera: But only Mike Sherzan has actually done it.

This strikes me as a highly effective message for progressive women. Targeting women voters is smart, since they may comprise the majority of the electorate who will choose among Sherzan and his two male rivals for the Democratic nomination in IA-03.