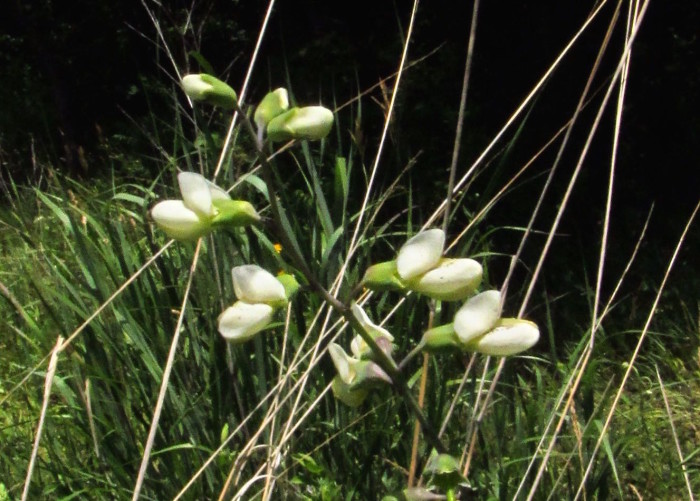 Today's post is dedicated to Mike Delaney, whose birthday is July 6. The founder of the Raccoon River Watershed Association has been a tremendous advocate for Iowa's water, soil, and native plants and animals. He was a key lobbyist for a wild turtle protection bill that was a bright spot in an otherwise dismal legislative session for the Iowa environmental community. Mike has helped organize Citizens for a Healthy Iowa and the Iowa Conservation Voters PAC.

I took all of the pictures enclosed below at a prairie Mike has been restoring on farmland he bought in Dallas County during the late 1980s. The biodiversity on this relatively small patch of land along the Raccoon River is phenomenal. I tried to capture some wider views in the last three photos.

As usual, I recommend the Illinois Wildflowers or Minnesota Wildflowers websites for botanically accurate descriptions of this plant's foliage, flowers, and fruit. The perennial is reportedly "easy to grow from seed" and thrives in a range of habitats: "moist to dry black soil prairies, sand prairies, thickets, edges of marshes and sandy marshes, borders of lakes, limestone glades, and dry clay hills."

According to Wildflowers of the Tallgrass Prairie by Sylvan Runkel and Dean Roosa, this plant "resembles asparagus" when it first emerges from the ground, "but it is poisonous and should not be eaten." The blossoms "are similar to pea flowers." They bloom first near the bottom of the plant, as this picture shows. Behind the white wild indigo, you can see yellow or gray-headed coneflowers.

Flowers are blooming at the upper end of this plant, but seed pods have already formed further down. The yellow flowers are black-eyed Susans.

Fruit pods where white wild indigo bloomed a few weeks ago near flowers that recently opened:

Finally, three shots of Mike Delaney's restored prairie. Compass plants in bloom tower over the rest of this scene. In the foreground, some pale purple coneflowers are blooming amid many black-eyed Susans. Behind the compass plants, some white flowers in the aster family (perhaps daisy fleabane) can be seen, along with horsemint (bee balm, wild bergamot) and a few butterfly milkweeds (the splashes of orange).

Common milkweed blooming in the foreground, with pink horsemint flowers just behind, and further back a sea of asters, black-eyed Susans, and ox-eye.

This part of the restored prairie backs onto woodlands. In addition to the flowers just mentioned, some yellow or gray-headed coneflowers can be seen in the background.