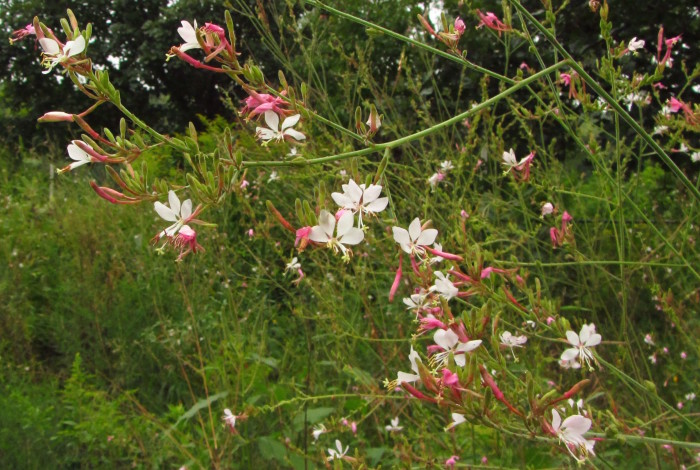 Today's featured plant was a new discovery for me a few weeks ago. Its tall, branching stems with many delicate flowers compelled me to pull over my bicycle, despite being hungry for breakfast at the downtown farmers market.

Biennial gaura (Oenothera gaura) is native to much of North America east of the plains states. As its name suggests, the plant has a two-year cycle, developing a "a rosette of basal leaves" during the first year and flowering the next year. You are most likely to find it in "tall grass prairie, woodland openings and river banks." Biennial gaura thrives in full sun but "tolerates many kinds of soil." Its alternate name biennial beeblossom testifies to the plant's appeal to various insect pollinators.

I took the enclosed photos along the Meredith bike trail in Des Moines, close to the southeast end of Gray's Lake.

As always, the Illinois Wildflowers and Minnesota Wildflowers sites are good resources for detailed, botanically accurate descriptions of this plant's foliage, flowers, and seeds. I don't have pictures of the leaves during the first year of biennial gaura's cycle, but here's an upper stem with buds just about to bloom during the second year.

More flowers blooming, with buds yet to open. The yellow flowers in the background of the next picture are common evening primrose.

In full bloom, colonies of biennial gaura have hundreds of flowers.

Biennial gaura plants can reach heights of seven feet. I saw many taller than I am, but in this next picture, other prairie plants tower over the gaura. Those are some kind of goldenrod near the upper right. The tallest plants near the back, with sunflower-like flowerheads, are prairie dock, a close relative of rosinweed, compass plant, and cup plant. To the left of the gaura, common milkweed plants that bloomed earlier this summer have large seed pods.

Speaking of tall native plants, here's some giant ragweed growing alongside gaura. My sympathy goes out to hay fever sufferers; the ragweed is in full bloom along many Iowa trails now. I believe the plants near the lower left corner of this shot are yellow giant hyssop, soon to be featured at Bleeding Heartland.

I saw many bees visiting these flowers. They were mostly too quick for me to capture a good shot. However, you can see a bee on a gaura flower near the lower left corner of this picture, dominated by the common milkweed plants and common evening primrose plants with narrow seed pods.

These gaura plants have nearly finished blooming. You can see the diamond-shaped fruit forming.