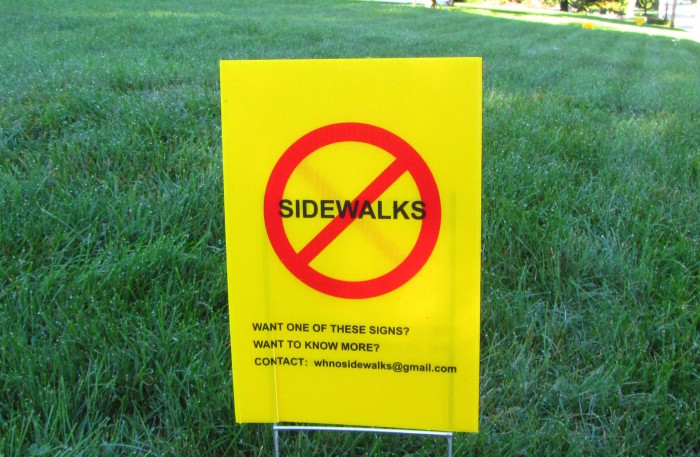 Fulfilling the hopes of residents who have been working toward this goal for many years, the Windsor Heights City Council voted 4-1 last night to approve a new sidewalks ordinance with a view to installing sidewalks soon on more city streets.

To the surprise of many who don't live here, sidewalks have aroused passionate opposition in Windsor Heights, becoming a key issue in multiple local elections.

Some homeowners don't want to lose part of their yard or landscaping and don't want the responsibility of shoveling the sidewalk in the winter. During this year's July 4 parade, several residents displayed no-sidewalks signs. Hundreds of yard signs with the same message have popped up around town. On some streets, nearly every yard is now displaying one of these signs. I enclose a few pictures below.

In 2004 or 2005, the Des Moines suburb next door forced residents of older neighborhoods in Clive to install sidewalks and assessed homeowners for half the cost. Around the same time, Windsor Heights developed a sidewalks plan under which the city would have paid the full cost of installation. But people living on key streets kicked up a huge fuss, prompting the city council to delay that proposal. Soon after, three candidates running against new sidewalks were elected to the council. It took nearly another decade for supporters of a more walkable city to elect a majority.

In city with fewer than 5,000 residents, several public meetings have attracted more than 100 people wanting to make their views known on sidewalks. I spoke at one in May, where the crowd was roughly evenly divided. Kim Norvell reported on a July meeting dominated by the "no sidewalks" contingent.

Your unintentional comedy for the day is Michael Dasilva's story for WHO-TV on last night's meeting. Supporters of increasing safety and raising property values in our city collected more than 300 signatures on a petition, but opponents who packed the room presented their own petition with 889 signatures.

It was made clear that sidewalk supporters were not welcome.

“I`ve lived there for 30 odd years, Windsor Heights has always been known for being kind of different, and let`s keep it that way,” said Janice Minarsich. “Those that don`t agree with it, want sidewalks, let them move back to Des Moines or West Des Moines where they belong because Windsor Heights is unique.”

Ms. Minarsich, I've been a Windsor Heights resident for more than 30 years. So has Kathryn Dickel, who has done tremendous work on this issue and pointed out that the revised city sidewalk ordinance includes a very generous maintenance policy to address people's concerns about clearing snow. Windsor Heights already has a "complete streets" ordinance on the books. Sidewalks are an essential element in any pedestrian-friendly neighborhood.

I hope the council moves quickly to put sidewalks on the key streets leading to schools and what passes for a "town center" here. They need to act before the next local election in November 2017, because two council members could easily lose their seats over this controversy.

P.S.- I enclose below excerpts from a revealing story by Brian Morelli for the Cedar Rapids Gazette. Some people who fought hard against new sidewalks in Iowa's second-largest city now see the benefits of more walkable neighborhoods.

Sign on a corner lot next to a sidewalk along 73rd Street. The homeowner does not want a sidewalk going in front of the house on the side street.

Street with "no sidewalks" signs in almost every yard:

From Brian Morelli's September 4 article, "After sidewalks installed, some Cedar Rapids critics admit they are better off."

“I don’t appreciate having to pay for it — it’s a payment I didn’t ask for,” said Kevin Sanborn, owner of Kevin’s Transmission and Auto Repair, 2200 16th Ave. SW, which got a sidewalk with a retaining wall this summer. “But before there was no place for them to walk, now they have a place.”

Jefferson High School students and a man in a wheelchair frequently use the sidewalk, although some still cut through the parking lot, he said. [...]

“I don’t like that I have to pay for it — $3,200, and I don’t like they replaced my nice grass with weeds,” said Linda Stauffacher, 69, who lives on Wiley Blvd. NW where a new sidewalk connects to a dirt trail at Jackson Park and Jackson Elementary. “But I am glad because the kids of Jackson have a place to walk. I am seeing more and more people go by on bikes and walking. I know in the long run it’s better.” [...]

Lorraine Worsfold, 80, who’s lived on G Street NE for 45 years, was among those who resisted sidewalks on Prairie Drive NE near Regis Middle School in 2014. She signed a petition that garnered 20 some signatures.

LATE UPDATE: I canvassed five streets in Windsor Heights on September 24 for Jennifer Konfrst's campaign in Iowa House district 43. Four of them had no sidewalks, even though all of the streets were close to Colby Park (a major amenity, where large events often force people to park on nearby streets). Many homeowners on all of those streets were displaying the yellow yard signs. The fifth street (69th) has sidewalks on one side and hardly any yard signs. What do people think is so awful about making it easy for people to get around the neighborhood safely on foot?

On a few doorsteps, I saw anti-sidewalk literature. I didn't take any copies but the flyers focused primarily on fiscal arguments. Supposedly Windsor Heights "can't afford" to install sidewalks and should be spending public money on street and sewer repairs (which are happening already).

Top image: "No sidewalks" yard sign, one of hundreds currently being displayed around Windsor Heights, Iowa