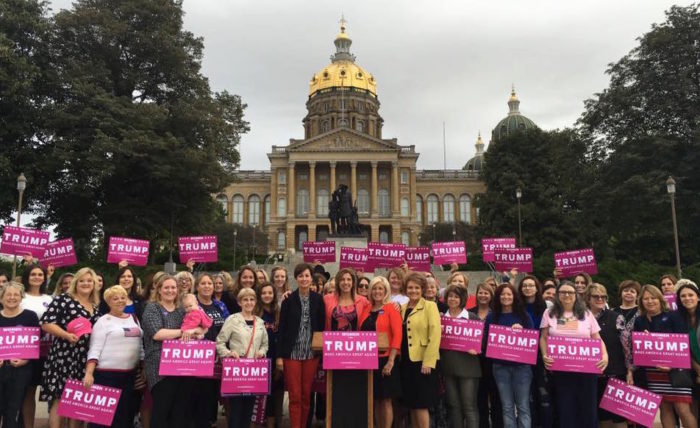 How many more Iowa GOP women will find their voice on Donald Trump?

Melissa Gesing reached her limit this week. Four days after a 2005 video showed Donald Trump telling a reporter he could "do anything" to women, two days after Trump insisted in the second presidential debate that those comments were merely "locker room talk," Gesing stepped down as president of the Iowa Federation of Republican Women. In her October 11 resignation letter, she described her move as a "last resort," saying she can't "look at myself in the mirror each morning if I do not take a stand against the racism, sexism, and hate that Donald J. Trump continues to promote." She explained her decision at greater length in a blog post called "Ending this bad and unhealthy relationship."

So far, no other woman in the top echelon of Iowa Republican politics has jumped ship. The Iowa Federation of Republican Women named a new president today and restated its support for the Trump-Pence ticket.

But how long can that last, with more women coming forward every day to say Trump kissed or groped them without consent, and used his position of power to walk in on women or underage girls undressed?

Of course, women are not and should not be the only people disgusted by the latest Trump revelations. But the new reports triggered deep loathing for many women who have been subjected to leering, unwanted touching, and sexual assault. Those traumatic memories have inspired innumerable real-life and social media conversations since last Friday.

Some politicians have channeled the outrage of "ordinary people." Dozens of Republican members of Congress or governors have announced since October 8 that they will not support their party's presidential nominee.

To my knowledge, only two Iowa Republican elected officials or candidates have said in recent days that they will not vote for Trump: second Congressional district nominee Christopher Peters and State Representative Ken Rizer. (State Senator Jack Whitver called on Trump to step aside but has ignored my repeated inquiries about whether he will vote for the man who refuses to step aside.)

Senator Joni Ernst, who sometimes postures as an advocate for sexual assault victims, remains a loyal soldier for the man who boasted he "can do anything" to women he finds attractive.

I have not seen any public comments about Trump this week from other prominent women in Iowa politics. Today, the Iowa Federation of Republican women announced that Gwen Ecklund will step in for Gesing. Erin Murphy reported for the Waterloo-Cedar Falls Courier,

“While we find Donald Trump’s comments recorded 11 years ago to be insulting and demeaning, we need to keep our hearts and minds focused on what’s best for our country and not allow emotions to cloud the big picture,” Ecklund said in a news release. “We are fighting for what we believe in, fighting to preserve our conservative values of smaller government, religious freedom, marriage between a man and a woman, sanctity of human life and a strong national defense. The Republican ticket of Trump-Pence will push forward those principles. Hillary Clinton has vowed to destroy them.” [...]

“The Trump-Pence Iowa team is encouraged by the outpouring of support among Iowan women for Mr. Trump’s candidacy, specifically over the past week,” Eric Branstad, the state director for the Trump campaign in Iowa and Iowa Gov. Terry Branstad’s son, said in a statement. “Our Iowa Women for Trump coalition has grown during that time as Iowan women continue to reject Hillary Clinton’s corruption, lies and hypocrisy and embrace Donald Trump’s message of making America great again.”

Like state party chair Jeff Kaufmann did over the weekend, these Republicans imply Trump did nothing beyond making "insulting and demeaning" comments. But on that videotape, he was bragging about his actions. Multiple women are saying on the record that they experienced what Trump said he does ("I just start kissing them. [...] I don’t even wait. And when you’re a star, they let you do it. You can do anything").

Over the weekend, a statement from the governor's office said Governor Terry Branstad and Lieutenant Governor Kim Reynolds "think these comments were reprehensible and offensive but support the vision Donald Trump and Mike Pence have for a stronger, more secure America."

Upmeyer has no Democratic opponent and did not endorse a candidate before this year's Iowa caucuses.

Sinclair has no Democratic opponent and did not publicly endorse anyone after her initial pick, Wisconsin Governor Scott Walker, dropped out.

Miller is not seeking re-election and supported former Florida Governor Jeb Bush, who said months ago he would not vote for Trump.

Pettengill supported former Texas Governor Rick Perry and did not endorse another presidential candidate after Perry ended his campaign.

Hanusa endorsed Ohio Governor John Kasich, who confirmed over the weekend that he won't vote for Trump.

Whether or not Trump carries Iowa, he has very little chance of becoming president now. I doubt any Republican will regret speaking out for basic standards of human behavior. Gesing observed in this week's blog post,

supporting Donald Trump has been a bit like being in a bad and unhealthy relationship. Part of the problem with getting out of the relationship is that you keep convincing yourself that things are going to get better. While they often briefly get better, they continue to get worse until the downs are lower than one ever thought possible.

In the meantime, you lose yourself and you lose who you are just to try to keep the peace and not rock the boat. [...]

This [the 2005 videotape] is also not an isolated incident from a decade ago. This is one of way too many times where Trump has used unacceptable words and actions. That is what makes me so sad for my party.

I should have spoken up long ago. I do not like attention. I did not want to rock the boat. I wanted to honor my commitment in my role for Republican women.

I’m not trying to excuse the multiple chances that I gave to Donald Trump. I am telling you what was going on in my head, right or wrong. I honestly thought at some point we would turn a corner, things would get better, apologies would be made, and it would all be OK.

I was wrong, and it really pains me to have to say these things less than 30 days out from the election. I am not going to talk about any of the Democrat, Independent, Green, or Libertarian Party candidates because this is not about them. This is about who our Republican nominee for President is and what we as Republicans will stand for. [...]

When I look back on this election years from now, I want to be proud of taking a stand for what I thought was right, even if I cut it a little close on the deadline. Decency transcends party loyalty. I still believe in an America where we can elect decent and honorable people to lead us.

Wise words. Who else will decide to be a role model for principled Republican women?