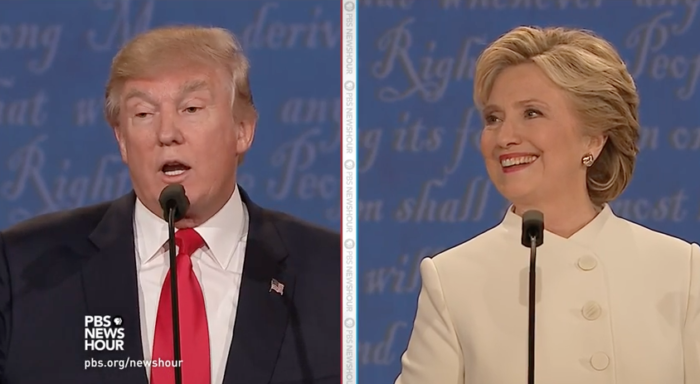 Donald Trump proved in his final debate against Hillary Clinton that he hasn’t run out of ways to demonstrate he is unfit to serve as president.

About an hour in, Chris Wallace asked the Republican nominee a simple question: will he accept the result of this election? Trump said, “I will look at it at the time,” then rattled off a bunch of bogus talking points. To his credit, Wallace pressed Trump on whether he would honor the tradition of a “peaceful transition of power,” with the loser conceding to the winner. “Are you saying you’re not prepared now to commit to that principle?”

Trump responded, “What I’m saying is that I will tell you at the time. I’ll keep you in suspense.”

Normal candidates may make gaffes. Unorthodox candidates may say things that are shunned in polite company. But before Trump, even the most offensive candidate didn’t refuse to accept the will of the voters. Associated Press reporters Julie Pace and Lisa Lerer conveyed the enormity of Trump’s break with tradition in the lede to their debate wrap-up: “Threatening to upend a fundamental pillar of American democracy […].”

Every GOP candidate and office-holder must repudiate Trump and affirm that they will respect the outcome on November 8. Iowa Secretary of State Paul Pate spoke out on Monday, describing Trump’s warnings about “large scale voter fraud” as “not helpful” and “misinformation.” Governor Terry Branstad tried to have it both ways, expressing “confidence” in the election system but claiming Trump has been a victim of media bias, and that Iowa county auditors won’t be able to prevent all attempts at voter fraud.

That’s not good enough. By suggesting the result might be illegitimate, Trump could provoke political violence that is unprecedented following a U.S. election in our lifetimes.

Any comments about the third debate are welcome in this thread. For those who missed it, the full video is here, a full transcript is here, and the Los Angeles Times published transcripts of some noteworthy exchanges. Links to a few good fact checks: NPR, New York Times, ABC, Factcheck.org, and Politifact. I enclose below the clip with Trump’s rigged election claims and Clinton’s response to his “horrifying” remarks.

A few other moments stuck out in my mind:

• Clinton’s strong defense of a reproductive rights: “I will defend Roe v. Wade and I will defend women’s rights to make their own healthcare decisions.” Members of CNN’s focus group liked Clinton’s answer to that question better than any other from the Democrat.

• The exchange over immigration policy, in which Trump referred to some “bad hombres” while Clinton pointed out, “We have undocumented immigrants in America who are paying more federal income tax than a billionaire.”

• Clinton saying Russian President Vladimir Putin would “rather have a puppet as the president of the United States” and telling Trump, “You are willing to spout the Putin line, sign up for his wish list, break up NATO, do whatever he wants to do.”

• Trump interrupting with “Such a nasty woman” while Clinton answered a question about Social Security and Medicare. Mental health experts say narcissists “project onto others qualities, traits, and behaviors they can’t—or won’t—accept in themselves.”

Wallace was a much better moderator than I anticipated from a Fox News personality, despite a few missteps.

Trump refusing to promise to accept the election result: