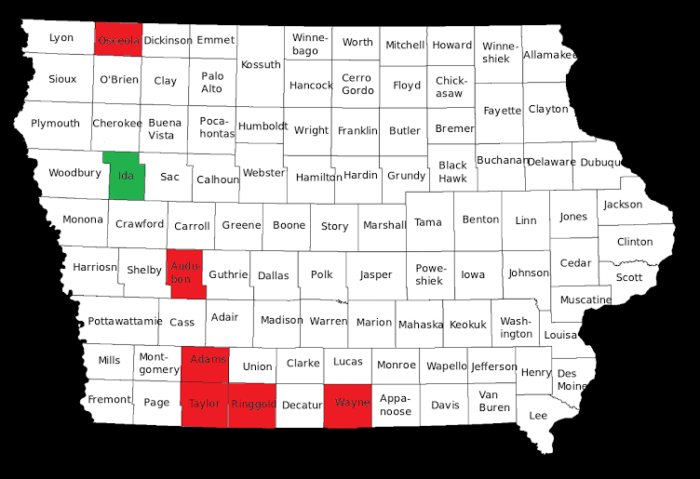 Now we visit Ida County, the 7th smallest in Iowa

The previous six installments in this planned 99-part series are available here. -promoted by desmoinesdem

This week I will review our seventh-smallest county in terms of population, Ida County. The 2010 census found 7,089 people living in the entire 432 square miles of the county, the 14th smallest in Iowa. To put this in perspective, Ida County is roughly equal in population to the city of Hiawatha (Linn County). Ida County is north west of Des Moines. According to Google Maps, the county seat of Ida County, Ida Grove, is 139 road miles from the Iowa State Capitol building in Des Moines.

Ida County was founded in 1851 when it was separated from Greene County. The county was most likely named after Ida Smith, the first person of European ancestry to be born in the county.

Once again the highest population in Ida County (12,324) was in the 1900 census. Ida County has lost population in every census since that time. The racial makeup of the county in 2010 was 99.02 percent White, 0.10 percent Black or African American, 0.06 percent Native American, 0.24 percent Asian, 0.15 percent from other races, and 0.42 percent from two or more races. 0.47 percent of the population were Hispanic or Latino of any race.

Some 5.7 percent of the population live in households with income at or below the poverty level. Average personal income was estimated at $49, 674 which was the highest of Iowa’s 99 counties. Ida County had the 18th lowest unemployment rate in 2010 (tied with several others), 5.1 percent. (As of December 2016 the unemployment rate was 2.5 percent.)

In terms of educational attainment, Ida County has the 39th highest rate of residents having received a bachelors degree or higher, 18.3 percent. The overall rate in Iowa is 24.8 percent, as a comparison.

Since 1960, the Republican Nominee has carried Ida County 14 times and the Democratic Nominee 1 time, with the most recent Democratic victory in 1964. Romney carried Ida county in 2012 by 26.35 percent while Trump won in 2016 with a 51.6 percent advantage!

The Ida County Board of Supervisors has a 3-0 Republican monopoly. All county elected officials are Republican except the County Attorney.

Looking back at the 2014 elections, Jason Schultz was unopposed in the Iowa Senate race. Joni Ernst carried Ida County with 69.2 percent of the vote against Bruce Braley, and Governor Terry Branstad received 79.3 percent against Jack Hatch, so Democrats losing in the county by wide margins is a continuing trend.

While Ida County was an another electoral disaster for Democrats in 2016, in the county Democrats have not been competitive in presidential elections since 1960 with the exception of the national Lyndon Johnson landslide in 1964.

Many 2016 election post mortems have pointed out the disastrous (for Democrats) collapse of support in rural areas that have little demographic diversity. Ida County is an yet another example where this problem is long standing, and 2016 was marginally worse than recent elections. Democrats cannot expect to find electoral success when losing counties by 52 percent in Presidential elections, 64 percent in Senate elections, and definitely not by failing to have a candidate for Iowa Senate and most county government races.