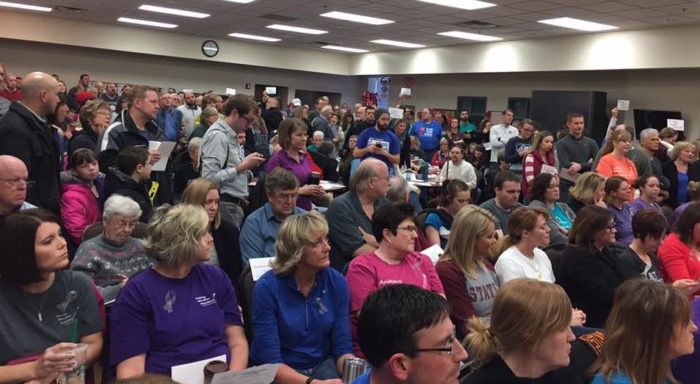 All over Iowa this year, record numbers of citizens have been turning out for legislative forums. Controversies over education spending and Planned Parenthood funding brought out many activists earlier in the legislative session. This weekend, the overwhelming majority of attendees wanted to talk about the Republican bill to eviscerate Chapter 20, Iowa’s law that has governed collective bargaining for public employees since 1974.

Pat Rynard posted some pictures of crowded rooms from around the state and wrote up memorable moments from the Ankeny forum, where 400 to 500 people questioned Republican State Senator Jack Whitver and State Representatives John Landon and Kevin Koester. Remarks by Governor Terry Branstad’s former education policy director Jody Butler were a highlight of the Ankeny event. Butler testified against the collective bargaining bill at a February 8 Iowa Senate hearing, telling lawmakers, “You will be setting us back, demoralizing the profession of teaching, probably doing irreparable harm.”

Education funding and labor rights were also hot topics at the Waukee “legislative coffee,” where GOP State Representative Rob Taylor and State Senator Charles Schneider stayed late to take questions from some people in the overflow area, and in Cedar Falls, where turnout far exceeded any previous legislative forum, according to the Waterloo-Cedar Falls Courier’s political correspondent Christinia Crippes.

Some Republicans are afraid to show their faces at such events. Last weekend, GOP State Representative Shannon Lundgren was a no-show for the packed legislative forum in Dubuque. On February 11, State Senator Jeff Edler was nowhere to be seen in Marshalltown, while Senate Majority Leader Bill Dix, Senator Jerry Behn and State Representatives Rob Bacon and Dave Deyoe missed the event in Gilbert. Deyoe chairs the Iowa House Labor Committee; speaking to the Des Moines Register this week, he ludicrously denied the collective bargaining bill is about “union busting.” For his part, Dix falsely told a New York Times reporter that the GOP “had campaigned on such changes […] and intended to make good on its commitments.” I closely followed Republican messaging in direct mail and television commercials last year and don’t remember any candidate promising to take rights away from teachers and other public employees.

Some lawmakers hold public forums on Fridays, when most working people are unable to attend. Even so, 20 to 30 people showed up on February 10 to challenge Republican State Representative Tedd Gassman and State Senator Dennis Guth about the collective bargaining bill. According to Gassman’s former Democratic opponent Dave Grussing, Guth admitted “that none of the calls to ‘modernize labor rights in Iowa,’ came from anyone in Iowa.” While defending the GOP proposal, Gassman revealed he didn’t understand the difference between mediation and arbitration.

Your Iowa Republicans at work.

Count me among the many Iowans who would love to see Petersen join Rich Leopold and Jon Neiderbach in the field of Democratic gubernatorial candidates. Not only is Petersen knowledgeable about public policy, she is also an effective communicator, as she showed repeatedly while the Republican bill to defund Planned Parenthood was moving through the Iowa Senate.

I enclose below a fundraising e-mail Republican State Senator Rick Bertrand sent this week on behalf of Iowa Gun Owners, which claims to be “Iowa’s only No Compromise gun rights organization.” Among Second Amendment activists, there’s a big schism between this group and the Iowa Firearms Coalition (an affiliate of the National Rifle Association). So-called “Stand Your Ground” legislation (passed by Iowa House Republicans in 2012 but blocked by Senate Democrats) is a high priority for both groups. Iowa Gun Owners leaders portray the NRA and its allies as sellouts, while those aligned with the Iowa Firearms Coalition consider Iowa Gun Owners to be corrupt frauds who exaggerate their influence on pro-gun bills adopted by lawmakers.

A Bleeding Heartland reader forwarded this e-mail, which came from an Iowa Gun Owners domain (rick.bertrand@iowagunowners.org), not from Bertrand’s legislative account.

Every time I see one of my Republican colleagues in Des Moines — still on cloud nine after the results of the November 2016 elections — that’s what I tell them.

I want each and every one of my colleagues to understand we have a job to do.

Sure. Celebrations are fine.

Now that we’re back in session, it’s time to keep our promises, and restore Iowa to its rightful place as a leader in protecting the Second Amendment with the passage of Stand-Your-Ground law.

There can be no more excuses.

If you agree, won’t you please sign and submit the Stand-Your-Ground petition that I’ll link you to below? More on that in a moment.

As you’ll see, these petitions urge your State Representative and Senator to do everything in their power to make Stand-Your-Ground law a reality in Iowa.

The truth is, without passage of these reforms, Iowa will continue to fall off the map when it comes to recognizing our Second Amendment freedoms.

You see, according to Guns & Ammo Magazine’s latest ranking, there are only 12 states WORSE for gun owners than Iowa!

Anti-gun states like Delaware, Rhode Island and even Illinois are nipping at our heels!

I hope you agree, this is flat-out UNNACCEPTABLE.

The good news is, with your action today, I’m more confident than ever that we can finally make Stand-Your-Ground law a reality here in Iowa!

This would be a MAJOR step forward.

Just the threat of running into someone who is armed is enough to convince many career criminals to think twice!

That is . . . if the law weren’t so biased in favor of criminal attackers here in Iowa.

You see, under current law’s “duty to retreat,” innocent gun owners are routinely prosecuted for nothing more than protecting themselves.

That’s because Iowa doesn’t have a Stand-Your-Ground Law, which would simply state that Iowa gun owners can protect themselves and their families without fear of being targeted by an anti-gun prosecutor who doesn’t like gun owners.

The LAST thing you want to be worrying about in a situation where there are lives on the line is the “good will” of some anti-gun prosecutor or judge.

2017 is the year to make it happen here — just as neighboring Missouri did last year.

But your help is going to be critical to getting the job done.

After all, nothing in Des Moines moves unless it’s pushed.

So your action today is absolutely critical. Please sign the petition in support of Stand-Your-Ground law right away!
The good news is, my colleagues in Des Moines just saw what happens to legislators who choose to stand in the way of Iowa Second Amendment supporters, as gun-grabbers were crushed at the polls.

But it was the defeat of two of the most powerful politicians in all of Iowa on Election Day 2016 — Senate President Mike Gronstal (D) and Senate President Pro-Tem Steve Sodders (D) — that truly sent shockwaves throughout Iowa politics.

And every gun-grabber in the state is blaming Iowa Gun Owners for their work EXPOSING the records of these anti-gun politicians (and others) using everything from U.S. Mail and social media to hard-hitting radio and TV ads.

So without question, Iowa Gun Owners is one of the biggest and fiercest forces in state politics today.

But these victories for Second Amendment supporters will be wasted unless we translate them into the passage of pro-gun reforms.

That’s why I’m counting on you to please sign your petition and submit it to Iowa Gun Owners immediately — and agree to your most generous contribution.
Your generosity today will help Iowa Gun Owners turn up the heat on the General Assembly with a massive grassroots program, including:

>>> Using email, social media and Internet ads to mobilize an additional 25,000 Iowans from all over the state;

>>> Working the blogs and granting media interviews to explain why Stand-Your-Ground law is so desperately needed here in Iowa;

>>> Paying for hard-hitting radio, newspaper and even TV ads to ensure politicians are feeling the most heat right before they’re forced to vote on Stand- Your-Ground legislation.

This won’t be cheap.

But this plan is what it will take to light the fire under the General Assembly to get the job done.

So won’t you please sign your petition in support of Stand-Your-Ground law, and submit it to Iowa Gun Owners IMMEDIATELY?
And if you can, please agree to your most generous contribution of $500, $250 or $100 right away.

Of course, I know that’s a lot to ask for.

But this could not be more important.

It will help them send the message to my colleagues that it’s time to deliver. No more excuses.

I’m counting on you to help send that message.

P.S. Guns and Ammo Magazine reports that there are only 12 states in the U.S. with worse gun laws than Iowa.

So with the new majorities in Des Moines, it’s time to fix this and finally deliver for Iowa’s Second Amendment supporters by passing Stand-Your- Ground law this year!