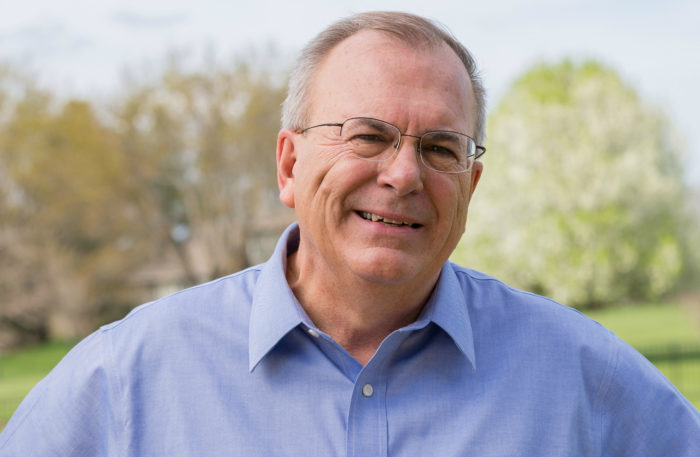 Mike Sherzan made it official yesterday: he is running for Congress again in Iowa's third district. I enclose below his announcement and background on the candidate, who finished second to Jim Mowrer in the 2016 Democratic primary. Sherzan has attended numerous recent political events in central Iowa, including last night's fundraiser for the House Truman Fund in Des Moines.

In a short new video, Sherzan said, "Like most Iowans, I'm fed up with what's going on with Washington politics. Iowans deserve a progressive leader, not a Washington career politician. That's why I've decided to run for Congress." During last year's campaign, he highlighted his business practices as a reflection of his values: treating workers fairly, sharing profits with employees, paying women the same as men, and promoting employees of either gender based on performance.

Speaking to Kathie Obradovich of the Des Moines Register, Sherzan criticized "the lack of leadership we have in the 3rd District" and charged, "We have individuals who have been elected to office who hid their intentions, in my opinion, and they’re using what people voted for to put into policy and then legislative action their own agendas, they’re far-right agendas."

GOP Representative David Young has drawn criticism this week for voting against a House resolution seeking to force President Donald Trump to release his tax returns. During a public forum in Urbandale on February 23, Young had said, "Donald Trump should release his taxes. It's a no-brainer."

At least one candidate will likely compete against Sherzan for the Democratic nomination in IA-03. Anna Ryon, an attorney with the Office of Consumer Advocate, has scheduled a "Meet Anna/Special Announcement" event in Des Moines on March 8, which is International Women's Day. Ryon confirmed last month that she is considering a Congressional campaign and already has a website up. UPDATE: Added below a March 2 news release from Ryon about her upcoming event.

Some recent rumors point to longtime Iowa political consultant Pete D’Alessandro strongly considering a bid as well. D’Alessandro served most recently as Bernie Sanders’ campaign coordinator for Iowa in the caucus. He’s been involved in nearly every major Iowa Democratic race in one way or the other for the past two decades, serving in key roles on Tom Vilsack, Chet Culver and Leonard Boswell’s campaigns, as well as Bill Bradley’s Iowa Caucus operation in 2000.

When I sought comment, D'Alessandro didn't rule out a campaign in IA-03: "Bernie Sanders has inspired so many people over the last two years--both veterans of the political process and those new to the process. Like many of them, I'm looking as to how I can help move the progressive movement forward. Running for office is certainly one of those options."

The sixteen counties in IA-03 contain 167,249 active registered Democrats, 177,408 Republicans, and 167,222 no-party voters, according to the latest figures from the Iowa Secretary of State’s office. Young won re-election in 2016 by 53.4 percent to 39.7 percent, outperforming the top of the GOP ticket by about five points. Although Trump carried IA-03 by 48.5 percent to 45.0 percent, the swing to the Republican presidential nominee here was significantly smaller than in Iowa's first and second Congressional districts.

IA-03 is on the Democratic Congressional Campaign Committee's long list of 2018 targets but not among the 20 top-priority Republican-held districts.

UPDATE: Forgot to mention State Senator Matt McCoy, who considered but decided against running for Congress in 2016. He is up for re-election next year in Senate district 21, covering parts of Des Moines and West Des Moines. He would have to abandon his seat in the legislature in order to challenge Young in 2018.

SECOND UPDATE: McCoy didn't rule out running for Congress, telling me, "I won't make any decision until fall 2017."

“Like most Iowans, I’m fed up with Washington politicians. Iowans deserve a progressive leader who will be a champion for working class families. It’s time to change the system that serves the interests of career politicians. That’s why I’ve decided to run for Congress,” said Sherzan.

Sherzan was raised on the east side of Des Moines near the Iowa State Fairgrounds. His mother was a clerical worker at Yonkers and his father worked in sales for Sears Roebuck & Co. His very first job was shining shoes at the Iowa State Fair for $.25 cents per shine. He graduated from the University of Iowa.

At age 39 he started his own financial services firm in Des Moines, Broker Dealer Financial Services. His company grew into an Iowa based, 60-employee firm with over 250 representatives and 35,000 customers located in Iowa and across the country. After 25 years of helping Iowans save for retirement and fund their children’s college education, Sherzan retired from his employee owned business.

“My parents raised me to believe in the American dream. I am a direct result of the opportunities Iowa gave them. Because of Washington politicians like David Young, that dream now seems out of reach for many of our state’s citizens,” said Sherzan. “I’m running because I’ve spent my life helping Iowans get ahead. These same people are being left behind by politicians in Washington and I refuse to sit back and let it continue. In job creation, healthcare, and education funding, David Young has not shown leadership. I look forward to building a grassroots campaign that will move Iowa working class families forward.”

Sherzan resides in Dallas County and has been married to his wife, Susan, for 40 years. He is the proud father of three and grandfather of seven.

For more information, go to: www.SherzanforIowa.com

From the "Meet Mike" page of Sherzan's campaign website:

I was raised on the east side of Des Moines where my mother stayed at home to raise my two older brothers, sister and me while my father worked in sales for Sears Roebuck & Co. Our family had just enough to make ends meet, I remember growing up our vacations were mostly road trips we’d take in our station wagon, stopping to sleep at rest stops or in makeshift tents in parks along the way.

My parents loved us kids more than anything and raised us to believe in the American Dream. Like all parents they wanted the best for their children. My very first job was shining shoes at the Iowa State Fair for $.25 cents per shine. During high school, I worked several jobs to save for college. I was a phone agent for Iowa based Look magazine, as well as an usher at the Paramount Theater in downtown Des Moines. During summers in college, I worked as a furniture mover and baled hay to help pay my way. During my junior year, my father died suddenly. I worked hard to finish my degree early to keep college expenses as low as I could for our family. Dad’s Social Security benefits covered the last of my tuition bills. I will always remember how important that support was to my mother.

After I graduated, my dream was to own my own business. I spent a few years selling carpet to learn how to work with people and make sales. Eventually, I started a company that grew into an Iowa based, 60-employee firm with over 35,000 customers in Iowa and across the country. When I retired from that company in October of 2015, I was proud to hand over the role of CEO to a very capable woman who shares my goal of keeping the company employee-owned. Those owner employees she now leads helped build our firm’s success over the years.

Des Moines, Iowa - Consumer rights attorney Anna Ryon will be holding an event to make an announcement about her possible candidacy to represent Iowa's Third Congressional District on Wednesday, March 8 at 6:00pm at Streetcar 209 in Des Moines' East Village.

Anna was born in Creston and her family roots are in the heart of the third district in Adams County. A graduate of Grinnell College and Drake Law School, she currently works for the state representing consumer interests on issues in front of the Iowa Utilities Board. Her previous legal experience includes volunteering at Iowa Legal Aid and working at a law firm in Washington, DC representing investors and unions that lost money to Wall Street during the financial crisis. Before attending law school, Anna spent several years teaching in public high schools in rural Virginia and teaching ESL to immigrants from Central America.

In discussing her decision, Anna said, "I intentionally avoided getting into politics for most of my life. I always thought it was enough to have a day job where I was doing something worthwhile and I could leave the vicious game of politics to people better suited for it. But the events of the last year have changed my perspective. I can no longer sit on the sidelines and wait for someone else to do what I'm not willing to do myself. It's time for me to be willing to put myself on the line and fight for what I believe in."

Anna lives in the Drake neighborhood of Des Moines with her husband Kevin Althaus. She is happy to be in the role of step-mother to Kevin's daughter and two sons.

For more information and to download a PDF version of this release, go to annaryon.com.

“Unlike David Young, I’ll be honest and direct on Jeff Sessions’ conduct: he needs to go, and quickly. The top law enforcement official in the country cannot lie under oath and keep his job. Sadly, I’m not surprised Young has been so quiet because after all, he’s got his own issues with the truth after lying to Iowans just last week by saying Donald Trump should release his tax returns and then three days later voting to let the President continue to conceal them. No wonder he’s been silent on Jeff Sessions. Once again David Young shown a complete lack of leadership.”