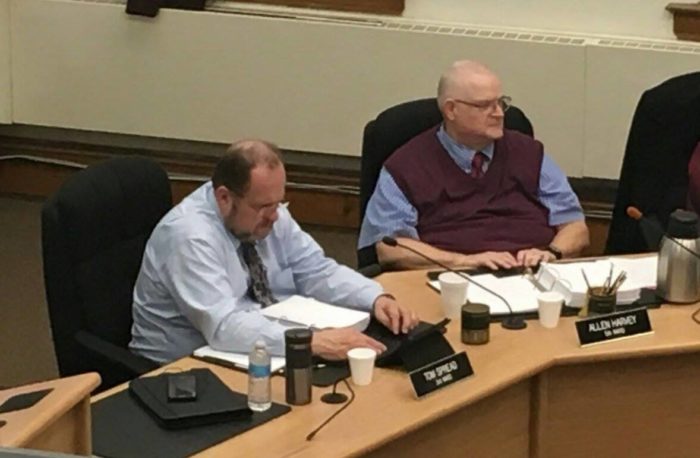 WWTD: What Would Twain Do?

Tracy Leone continues her coverage of the Muscatine City Council’s unprecedented effort to remove the mayor. You can find previous installments here and here. -promoted by desmoinesdem

“We had not time to go ashore in Muscatine, but had a daylight view of it from the boat. I lived there awhile, many years ago, but the place, now, had a rather unfamiliar look; so I suppose it has clear outgrown the town which I used to know. In fact, I know it has; for I remember it as a small place — which it isn’t now.” – Mark Twain, “Life on the Mississippi”

While watching the impeachment trial, I could not help but think over and over again, what would Mark Twain have written about this farce? Twain was eloquent and exacting in his mature writings, but in his youth, he cut his teeth as an author in his late teens and twenties writing travelogues for the Muscatine Journal which his brother Orion helped publish.

Twain knew this city when it was a small lumber town. There was no bridge across the wide muddy waters. At the time Twain called Muscatine home, the river’s waters themselves displayed much more of their natural rapids, before the Army Corp of Engineers dredged it’s rocky core at the elbow where the Mississippi River switches its route from its East–West to North–South.

Here was where the river’s shallows created a micro-ecosystem perfect for the clams and mussels which have long since disappeared. It was these mollusks, especially their iridescent pearly inner shells, that thrust Muscatine from sleepy river town to an industrial powerhouse at the turn of the century. Investors capitalized on the pearl button industry made from harvesting these mollusks and exploiting the workers, and they built many of the still standing gorgeous brick mansions on the bluffs overlooking the beautiful river. Now these stately mansions overlook the heavy industrial stacks of GPC, Monsanto, Muscatine Power and Water, and downstream, the Louisa coal power generating station.

It is these industries which, I think, are the unwritten parts of the recent Saga of Muscatine that has culminated in the impeachment proceedings now taking place. The impeachment is ostensibly about the thirty-six charges listed in the complaint filed by the city attorney, now witness, in the proceedings. But at a deeper level, they are about the fact that last year, for the first time in anyone’s memory, a woman who is a registered Democrat married to a union member, who is the sister of union member and supported by unions, and who is not at all beholden to Muscatine’s Industries, won the election for mayor.

From her first day as mayor, Diana Broderson was met with micro-aggressions including being told she could not invoice the tissue paper on her desk to entering her office, two months after the election, with the ex-mayor’s name still stenciled on the door. It was being told by the City Administrator, “I run this city” – an allegation the City Administrator absolutely denied when questioned about this at the impeachment trial. Whether these exact words were spoken is a dispute between two people who really are at the center of this power struggle, one being the elected mayor with limited powers, the other being the unelected bureaucrat who runs the city as if he were its ruler instead of its employee.

The investigation of the journalists is probably the most serious part of the allegations. I attribute it to the mayor’s political experience. She did not know that there isn’t such a thing as “off the record” or have the political savvy to understand how to work with journalists, many of whom, are out to get a scoop to launch their career into the stratosphere.

I see Mayor Broderson’s greatest crime is her inexperience and belief that there was a way to work with the council for the betterment of the community, thinking she could have enough influence to finally break the company town, Stockholm-syndrome condition that has existed in Muscatine since the 1911 Button Strike when National Guard troops were called in to suppress a workers’ uprising led by children and young adults who slaved away in disgusting conditions with rotting mollusk meat piling the streets. The stench was so powerful that it coined the aphorism, “Do you smell that? That’s the smell of money being made.” This same aphorism is still employed today, as the current residents are exposed to hazardous emissions from the GPC plant, a situation that resulted in GPC having to pay $1.5 million civil penalty, the largest in Iowa history.

Mayor Broderson pushed back against this enormous power and was shot down by a strict interpretation of the ridiculous city code that puts an unelected person in almost absolute control. Week by week, the palace intrigue got more ridiculous and malicious from both sides trying to land on a “gotcha” moment where it was revealed that they were corrupt. The mayor’s appointments to boards and commissions were blocked. Then the council removed her power to make appointments. The mayor suspected the previous mayor’s finances and triggered a state audit of the city’s books, costing the city time and attorney fees. (The Branstad administration has not yet released results from that audit.) She accused the city of gender discrimination, so the city hired a private investigator who concluded the accusations were unfounded.

The story is incomplete, though, if we do not also relate it to the decades long history of Muscatine in which the representatives of the key industries have always called the shots. But there were indications during the testimony that we got to witness that revealed much about this power struggle. During the questioning of Community Development Director Dave Gobin, we learned that the City was being investigated by the State because “standards were not met” on the state’s health inspection code. The Mayor was accused of injecting herself into this wrongly. But even a passing observer would think that this is kinda, sorta, exactly what you would want a mayor to be doing. There was also an email exchange that occurred related to this investigation (mind you we are talking about the city and state working together to ensure no rats or cockroaches are in Muscatine’s restaurants).

Another testimony given came from Diane Fleming, manager of a HUD housing complex for seniors and the disabled. Mayor Broderson called Diane and introduced herself as the mayor. Though the mayor’s mother was a resident at the facility, this was not mentioned during the phone call. The mayor mentioned to the HUD building manager that many of the senior residents were concerned because the new building management was allowing many younger disabled residents to live there, and this made them feel unsafe. The mayor then suggested that she knew the police chief, and that she could invite them over if they hosted a “Spaghetti Dinner” for police. The mayor thought this would be a great way for the residents to feel safer. The manager Diane disagreed. She testified that this was a “bribe” or a “threat”. What was interesting about this testimony is when she was asked by Prosecuting Attorney Nahra if she agreed to her earlier deposition, she said yes. But when questioned by the defense attorney Sueppel, she admitted to not having seen the text of her testimony, which was included in the binders presented to the City Council/Jury, so she could not practically attest to its accuracy.

Another telephone testimony came from City Engineer Jim Edgmon concerning whether or not a contractor who might bid on a city project should be considered responsible based on recent performance on a project they landed upriver in Davenport, Iowa. Many residents would applaud a mayor who was seeking such conservative prudent practices in awarding bids funded by taxpayers. But again, per strict reading of city code, this was testified as mayoral overreach and possibly libelous by the City Engineer and Administrator. The engineer chose to delete this email because he was concerned about the libelous consequences; however, the city attorney threw caution to the wind and included them anyway in these much-publicized impeachment charges. No one questioned the ethics of the City Engineer for deleting from public record a highly charged and potentially libelous email.

Fire Chief Jerry Ewers testified that he was not afraid to talk to the mayor or lose his job despite city code, establishing that the application of city code was at best arbitrary and capricious.

Randy Hill was also questioned. Randy is the recently retired Director of Public Works, now enjoying his state pension and also earning a salary as a temp worker for Temp Associates, an agency hired by the city to do the work of Director of Public Works. Some might call this double-dipping, and in fact, the state pension system expressly prohibits retirees from earning a pension while still on the public payroll. So the mayor, in her capacity, questioned if this set up was legit, legal, ethical. No worries, explained Randy and prosecuting attorney Nahra. This was all worked out since Randy was not directly employed by the city but instead employed by Temp Associates.

[To be continued. Stay tuned for the next installment Friday night. And if you have nothing else going on, please witness for yourself, Iowa history, as the impeachment hearing resumes at 9am on Saturday, April Fools Day.]