April 1 marked a year since Iowa allowed three private insurance companies to manage care for more than half a million Medicaid recipients. The shift was disruptive for thousands of Iowans as well as for caseworkers and service providers, some of which went out of business. Reimbursement problems and cutbacks to care are still affecting many people, Chelsea Keenan reported in this retrospective on the first year of the policy.

Although privatization was supposedly designed to save money and bring predictability to the state budget, the Branstad administration agreed last fall and again in February to hand over millions more state dollars to the managed-care organizations (MCOs), unlocking some $225 million in extra federal funding for the corporations, which have much higher administrative costs than Iowa's state-run Medicaid program did.

I enclose below the latest deceptive official statements about the "modernization," along with a demolition fact-checking job by Democratic State Senator Liz Mathis. I've also included independent State Senator David Johnson's reaction to what he called a "lousy, lousy" press release. While still a member of the Republican caucus during the 2016 legislative session, Johnson worked with Democrats trying to halt Medicaid privatization or at least provide stronger legislative oversight of the program.

The Iowa Hospital Association can't substantiate the Branstad/Reynolds claims on hospitalization rates, Tony Leys reported yesterday for the Des Moines Register. Excerpts from that story are at the end of this post.

On a related note: thousands of Iowans who follow this issue closely are mourning Rhonda Shouse, who died unexpectedly in late March. I never met Rhonda in person, but we communicated through social media, and I admired her relentless advocacy on behalf of those adversely affected by Medicaid privatization. Keenan marked her passing in the Cedar Rapids Gazette, and Leys did so in the Des Moines Register. May her memory always be for a blessing.

The Branstad/Reynolds press release from April 5 was full of good news:

· Empowering patients by knowing their health risk and needs.

· Coordinating care for most vulnerable patients and ensuring healthier outcomes.

Those links in the press release don't lead to supporting data, only to infographics like this one, which the governor's office also promoted on Twitter. 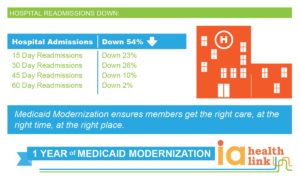 The Iowa Senate Democrats who have taken the lead on this issue were derisive in a news release yesterday:

“Everything the Governor lists can be refuted by patients, providers and advocates. Don’t believe this blather,” said Senator Liz Mathis of Robins. “We still have big issues with pre-authorization, physicians dropping hundreds of Medicaid patients and millions of dollars of claims left unpaid to providers. That is far from a successful year.”

“The willingness of Governor Branstad and Lt. Governor Reynolds to continue to mislead Iowans about their Medicaid privatization disaster is stunning,” said Senator Amanda Ragan of Mason City. “Now it’s up to Lt. Gov. Reynolds to be honest with Iowans and start repairing the damage privatized Medicaid has brought to Iowa families, health care providers and taxpayers.”

Mathis went into much more detail during a point of personal privilege in the Iowa Senate. You can watch her entire speech on the Iowa legislature's website, beginning at the 4:02:15 mark of this video. After debunking the Branstad press release, Mathis went on to describe some of the horrible outcomes people have experienced in Kansas, which privatized Medicaid before Iowa. Here's where Mathis addressed the press release (video also available on Facebook).

I just want to point out that the governor's numbers, lieutenant governor's numbers are not matching reality. What we're hearing from, again, members and providers. And [Republican] Senator [Randy] Feenstra in Ways and Means today was taking up the mental health levy bill. That's very important and even a couple of the providers stood up and talked about Medicaid and Medicaid payments, and some of the issues surrounding the managed care delivery system.

So here's the first point that the governor and lieutenant governor make: "Preventing hospital admissions and reducing unnecessary re-admissions." Well, hospitals were already well underway with admissions and re-admissions under the ACA [the 2010 federal Affordable Care Act] and under a "health homes" policy. It was already being done.

Point 2: "Empowering patients by knowing their health risks and needs." There is no measurement that supports this statement. And when MCOs were asked at the last Medicaid oversight meeting, "How will you know when managed care is a success? What data will indicate that?" the MCOs said it would take more time.

"Coordinating care for the most vulnerable patients and ensuring healthier outcomes." That's the third point. They do coordinate care for the most vulnerable patients, although there is criticism over unreturned calls, sloppy case management and worker shortages. Ensuring healthier outcomes is still something that has yet to develop through a longer collection of data.

Fourth point: "Utilizing preventive health and wellness services never offered before in Medicaid." I have heard time and time again that it's true that patients are getting different preventive health and wellness services, but they can't find transportation to some of these services, if it's a health service or if it's the Boys and Girls Club or whatever it is, there's always, there are always predicaments around transportation.

Point five: "Saving taxpayers $110 million in FY17 and $232 million in FY18." This comes up time and time again. Here's what this is. This is what the MCOs are spending versus a projection of what it might have cost under fee-for-service. It is a projection. This is not real. Again, that's why the MCOs can lose hundreds of millions of dollars and at the same time, the governor is saying that we're saving money. So I hope you understand that very important point.

Then under the "better outcomes" of the media release, it says "Hospital admissions and re-admissions." They say that hospital admissions are down 54 percent overall. Wow! Here's the ugly truth: that hospitals are continually battling with the MCOs over appropriate classifications of patients. For instance, if a patient comes into the ER, they're sick, unstable, or mentally ill, the MCO is now telling the hospital that these patients are "observation patients," and that classification has led to the admission number looking much lower than the comparison of what we used to do. Hospitals report an incredible increase in observation stays, and hospitals are not getting paid. It is much cheaper for the MCOs to do this. That's the ugly truth.

Mathis then discussed the downward spiral for Medicaid in Kansas; watch the rest of her speech beginning at 4:06:25.

Senator David Johnson took the floor immediately after Mathis. His remarks begin at the 4:17:00 mark. He read part of the governor's press release and pointed out that when you click on the embedded links, you get "a little poster here" rather than facts. "There's no depth to this at all." Johnson continued:

I was downstairs with some of the great people, the great Iowans who are served by Village Northwest Unlimited in Sheldon [O'Brien and Sioux County]. And you know, they're really concerned. And they know what MCO stands for. It stands for lack of services, dropping of services, inability to coordinate services. They know what this is all about. [...]

First we follow Wisconsin on collective bargaining, and then we, we follow Kansas on some of this Medicaid privatization. I mean, this is just silly. [holds up press release] Absolutely silly. You know, there needs to be a new communications director downstairs [who can] give us maybe a little more information on these lousy, lousy press releases. Sorry about that, but you know, wouldn't get in my paper back in the good old days.

“We’re as perplexed as anybody. Those sort of numbers don’t make any sense,” association spokesman Scott McIntyre said Wednesday afternoon.

The hospital association, which opposed the switch to private Medicaid management, has a federal contract to collect and publish extensive data on the use of Iowa hospitals. Their data show the number of Medicaid recipients being discharged from Iowa hospitals declined about 4 percent in the past year.

The two data sets being cited aren’t exactly the same, but they shouldn’t be off by a factor of 50 percentage points, McIntyre said. He added that if the number of Medicaid inpatients had dropped more than half, hospital administrators surely would have noticed.

Amy McCoy, spokeswoman for the Iowa Department of Human Services, said the press release was based on data reported to her agency by the three national companies overseeing care for more than 500,000 poor or disabled Iowans covered by Medicaid. Those data showed a decline from 28,462 hospital admissions of those members in the three months from April through June 2016 to 13,055 from October through December. A deeper look at the numbers showed the Medicaid management companies reported that hospital admissions quadrupled last spring, from 3,905 in April to 15,664 in June, before plummeting back to 5,723 in July. The reported June spike in hospitalizations pumped up the numbers for the first quarter’s worth of data cited in the governor’s press release.

McIntyre said his association’s data shows no such spike in hospitalizations last June.