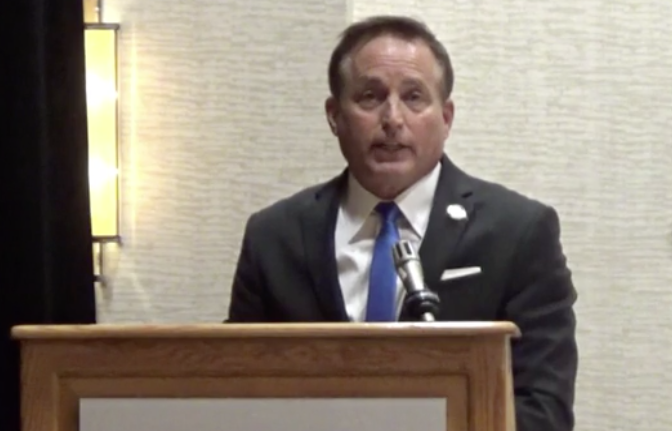 Stung by criticism of his proposal to enact new voter ID and signature verification requirements, Iowa Secretary of State Paul Pate accused some county auditors of pursuing a "partisan" agenda, as well as lobbing "blatant distortions," "smears," and "cheap shots." Pate made the accusations during a legislative briefing for the Iowa State Association of County Auditors on March 9. Earlier that day, House Republicans had approved a version of Pate's bill, ignoring feedback from many who warned the legislation would disenfranchise eligible voters.

Pate didn't call out any county auditors by name during his March 9 speech, but he sounded particularly enraged by Weipert, who has been a leading critic of the voter ID bill and testified against the proposal at a public hearing.

The Secretary of State's Office made a recording of Pate's remarks (which I requested on March 14) available to me only this morning. You can download the file through Dropbox. I enclose below my partial transcript. UPDATE: Embedded the video below, since the Dropbox link wasn't working for some.

Pate was not speaking off the cuff. He mostly read from a prepared text, looking up at his audience periodically. He "was supposed to give you a little more of a pep speech about building public confidence in our elections. But the events of recent weeks that have happened have caused me to change that approach." Pate said he had "directed my staff to be available to you at all times," to help county auditors do their jobs well. He feels that some hold "misconceptions" about his role as the state's leading elections commissioner. Legislators and the public expect him to propose policies and "play an active role" in shaping that policy. Pate said his staff had taken concerns raised by county auditors into account when drafting legislative proposals.

My transcript, picking up around the 3:10 mark of the video:

There has not been any initiatives put forth by the Iowa Association of County Auditors that I have opposed publicly or worked privately to undermine, even if it was a proposal I disagreed with privately. I remained silent because it was my belief that we worked better as a team. Therefore I must say that I'm disappointed with the very political nature this organization has taken in the past few weeks. Two years I've met with you, I've listened to you, we've talked about election policy. We have literally spent hours discussing the technology upgrades our election systems need. I've listened to you regarding your concerns about the security of absentee ballots.

I want to be clear: I don't mind that you oppose a piece of legislation that my office drafted. That is up to you as a group. What I do mind is that instead of reading this bill from an objective standpoint and acting as a bipartisan organization, there are some members of this body that have engaged in blatant distortions, smears, openly political maneuvers the past few weeks.

Here are the facts that I think all of you need some realization of. A major voter ID overhaul was coming to Iowa whether any of you liked it or not. The votes are there [in the legislature], and public opinion is on their side as well. 70 percent of Iowans want voter ID. The House passed a bill just this morning, and I'm confident the Senate will do the same.

There were numerous other proposals drafted by legislators that would put restrictions on voting and would implement strict photo ID--not voter ID, like I proposed. Some of those bills never saw the light of day in the legislature. That is in part because I aggressively led on that issue. The plan was to get out in front of this issue so that I could make sure this legislation is implemented properly, would not disenfranchise anyone, and would include many of the things that have been on the ISACA wish list for some time.

However the recent actions of some prominent leaders of this organization in public have politically undermined this group as a whole. One of your leaders [presumably alluding to Johnson County's Weipert] publicly called out individual legislators during a public forum. Caucusing with the Democrat legislators in their private meetings, and sitting on the House floor during the debate. Now that person may think that they're helping the party, but what this individual is not doing is helping this organization. In fact, those actions have politically tainted ISACA. It's true--these actions have potentially made it very hard for this legislature to work with ISACA on any of your legislative priorities which you hold.

Additionally, when the ISACA executive committee met with a decision to oppose the Election Integrity Act, how did my office find out about it? Phone call? E-mail? No, we read it from a partisan blogger [John Deeth, who heard about it from Weipert]. Even though [name unintelligible] and [Deputy Secretary of State] Carol [Olson] came and talked to you extensively about the bill, answered all your questions, and provided any information you requested, we did not receive the courtesy of letting us know your decision. We actually received it from a blog site [John Deeth's blog]. Instead you leaked it to a partisan blogger. In the future I'm asking that this body show my office the same professional courtesy that we have extended to you.

I received a letter from this association that the auditors do not support many of the provisions in House File 516 and Senate File 474, the election integrity bill. While I've never been told which provisions the association supports, and which provisions the association opposes, I've read some very inflammatory comments from auditors in the newspapers, about how none of you were consulted on this legislation. However, there are many provisions in the bill that come directly from county auditors. We did reach out and we asked for input for some time on this issue and other issues. [...]

Additionally, even after you came out publicly against the proposal, some members of this group belittled my staff, instead of arguing the merits of the bill, saying things like, "The way the legislation is written, it sounds like someone has not even voted in Iowa, much less administered an election."

So even after ISACA registered against my bill, and partisan shots were lobbed at my office, we studied the recommendations of ISACA's ad-hoc committee on voter ID. And guess what? House File 516 satisfied all eleven recommendations of your task force. [...]

Pate then spent several minutes explaining which parts of House File 516 correspond to recommendations from county auditors. Ten of the eleven suggestions were already in the bill, he said, and his staff are working with lawmakers to add the last one to the bill as well. He anticipates the Iowa Senate will approve and Governor Terry Branstad will eventually sign the legislation. Pate added that he appreciated ISACA's support for a technical election bill. Picking up around the 15:15 mark of the video:

I think you've been somewhat politically tainted by your own members' behavior recently. There are bridges that have been burned over the past few weeks in the legislature, and it's up to you as a body to rebuild them. We also have elections to administer here in Iowa. My office will continue to be a resource for all of you for training, and helping to provide guidance to poll workers and to ensure that all elections are being clean and fair.

During the last few minutes of his remarks, Pate looked up from his text and made more eye contact with the auditors:

I want to assure you right here and now, that I am going to commit 100 percent of my support to ISACA, to seek all programs that help us put the best and most professional elections out there. But I think we need to deal with what has just transpired, and I think, pave a way to the future so we can learn from what just transpired and work together better in the future.

Although Pate depicts himself as taking the high road during the voter ID debate, he has stubbornly refused to acknowledge basic facts about how such laws work in practice. He keeps repeating that his bill will not disenfranchise anyone. Yet research from other states shows that such laws do prevent some eligible voters from casting ballots. Some people who are eligible to vote will be unable to use a regular ballot, either because they lost their voter ID, forgot to bring it to the polling place, or a poll worker deemed their photo not to be a match. Putting untrained poll workers in charge of signature verification will lead to inconsistent standards across the state, forcing thousands more Iowans to cast provisional ballots. We know that many voters given a provisional ballot will be unable to make their votes count by getting to the county auditor's office in time.

It's also odd to hear Pate depict himself as some kind of injured victim, when Iowa Republican lawmakers are giving him what he wants. The people who will be unable to vote once his bill goes into effect won't be well-off white Republicans like Pate. They will be disproportionately poor, elderly, and/or citizens of another race.

UPDATE: Forgot to mention another oddity: after talking about how much he wants to work more constructively with the county auditors, Pate walked out of the room immediately after finishing his speech. He didn't take questions about amendments to House File 516 or listen to feedback on his airing of grievances.