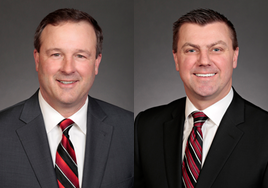 Iowa Senate Republicans voted last Friday to make no changes in the caucus's staff or leadership, following a sexual harassment lawsuit that led to a $2.2 million verdict against the state. Instead, Secretary of the Senate Charlie Smithson will internally review allegations that came to light through Kirsten Anderson's lawsuit, with the chamber's number two Republican, Senate President Jack Whitver, "overseeing the investigation."

Senate Majority Leader Bill Dix has claimed repeatedly that any problems relating to a hostile work environment were resolved soon after he took charge of the Senate GOP caucus in late 2012. But court testimony indicated that neither senators nor top Republican staffers ever asked others employed by the caucus whether they had observed sexual harassment or other offensive workplace conduct. Although Dix admitted hearing about matters "I was not aware of" during the trial, he still insists Anderson was fired in May 2013 solely because of her work product. Meanwhile, the current Iowa Senate Republican communications staffers occupy themselves with who-knows-what, as opposed to keeping the website and social media feeds current.

Dix confirmed that Republicans will not cover the costs of any payout to Anderson, opting to let taxpayers foot the bill for the lack of professionalism that persisted for years.

Republicans' failure to hold anyone accountable for this debacle underscores the need for independent consultants to take a hard look at what happened in the Senate GOP caucus and how to fix the work environment. Anderson has asked a Polk County District Court to make that happen.

Immediately after a Polk County jury found in her favor and awarded her $1 million more than she'd asked for in damages, Anderson said the verdict "sends a message" that "ongoing" behavior in the legislature needs to stop. As for how to make "positive change occur at the statehouse," she observed, "I think it's going to take maybe an independent third party to come in, ask some really important questions, some tough questions, maybe take an independent survey to get to the bottom of some things, and to enforce and enact training that is meaningful, that's taken seriously, and that everybody in all corners of that building understand and know the expectations."

On July 27, Anderson's attorneys fleshed out that request in a motion for post judgment relief, which you can read here:

The motion noted that unlike most governmental employers, "the legislature does not have a robust human resources department." Instead, it "ostensibly relies on individuals like the Secretary of the Senate to investigate complaints, which, as seen from trial, failed to offer Anderson any protection." For that reason, "it is up to the court to make sure not just that there is accountability for the damage done but also to protect other innocent people, employees, guests of the Senate, lobbyists, colleagues, and members of the staff office from illegal and hostile conduct but also from retaliation for standing up to the kind of behavior which was the subject of a lot of testimony in this case."

The motion argued that Dix's statement to the media following the trial "demonstrates that further investigation and training within the Senate Republican Caucus is necessary. Leadership cannot be trusted to remedy a problem it refuses to acknowledge exists." It also characterized that statement from Dix as

an unapologetic rejection of the considered judgment of eight impartial and unbiased Iowans who heard the evidence, explanations, and excuses, and found the State’s version of events nothing but empty platitudes. Even if one were to ignore the substantial evidence presented at trial that calls into question the credibility of this press release, there are additional reasons to disbelieve it circulating in the media. (See Six Hints Iowa Senate Republicans Didn’t Fire Kirsten Anderson Over Work Product, /2017/07/25/six-hints-iowa-senate-republicans-didnt-fire-kirsten-anderson-over-work-product/ (attached hereto as Exhibit A).

Side note: to my knowledge, that's the first time a Bleeding Heartland post has been submitted to a court. Since I published that piece a week ago, the Senate Republican communications staff still have not updated the website's front page, list of press releases, Twitter feed, Facebook page, blog, or events page.

On pages 9 and 10, Anderson's motion requests that the court order qualified outside consultants to "conduct a full and complete investigation of all complaints and issues raised in this lawsuit"; study the sources of problem behavior and provide feedback and recommendations; evaluate and improve the legislature's current written policies regarding the work environment; design and implement a better staff training program on harassment, discrimination, and retaliation; and train supervisory staff on the importance of protecting employees from retaliation.

Anderson is also asking the court to retain jurisdiction over this matter for five years, to demand regular reports from the independent consultants, the Iowa Senate, and the Republican caucus, and to appoint "a panel of five individuals in the community who have no interest in the litigation but who have expertise in fields such as human resources, industrial psychology, psychology, and/or discrimination law" to advise the court as needed.

Further, the motion asks the court to "order that no adverse action may be taken against any current employee of the Senate who testified in the case or who supports on an ongoing basis the need for change." Testimony from senior analysts Pam Dugdale, Tom Ashworth, and Russ Trimble during the trial supported several of Anderson's claims.

Finally, the motion asks for the eventual court order to be "prominently displayed, on the Caucus’ main webpage [...] for as long as this Court maintains jurisdiction of the equitable-relief order."

A twelve-page brief in support of Anderson's motion for post judgment relief argues that remedial action is allowed under the Iowa Civil Rights Act and "necessary to remedy ongoing violations of the civil rights laws occurring within the Senate Republican Caucus, and to protect the public and Iowa citizens as a whole."

As mentioned above, only one day after Anderson's attorneys formally asked the District Court to act, most of the Senate Republicans gave Dix another vote of confidence. Senator Rick Bertrand had called for Dix to resign soon after the verdict, but Dix and Whitver remain in charge of an unchanged leadership team. They have not made any caucus staff changes either.

“There were issues learned in the trial as the result of testimony that I was not aware of and, as a result, there is an investigation taking place to learn about those allegations,” Dix told reporters after meeting privately with his colleagues. “If we learn that they are truthful, we will move swiftly to address them in the appropriate manner.”

Several witnesses attested to harassing comments or actions by senior staff analyst Jim Friedrich. Current caucus staff director Eric Johansen also came under scrutiny during the trial. Hours before Anderson was fired in May 2013, she had given Johansen a memo asserting that newfound criticism of her work product was tantamount to retaliation for her complaints about sexual harassment. Dix's top aide Ed Failor, Jr. had "routinely commented negatively" on Anderson's clothing and shoes during the months before she lost her job.

The only Republican senator who wanted to to hold Dix accountable spoke to reporters after the July 28 meeting.

Sen. Rick Bertrand, R-Sioux City, who said his call Friday [July 21] for Dix’s resignation “was not received well,” left the meeting expressing concern that “it’s business as usual in the Iowa Senate.” But he indicated he was comfortable with the goals his party has set moving forward.

“I don’t think there’s really any significant changes that we’re going to see,” Bertrand told reporters after GOP senators met for more than two hours at the Capitol. “I believe that Sen. Dix did his diligence this last week, and there was enough ring-kissing to go around. There’s a reason why you have a meeting 10 days after the issue.” [...]

“At the end of the day, I made my peace, I’ve distanced myself from this thing, and our caucus made decisions,” Bertrand said. ““How do you make the changes that are needed with the current people in charge? If this was any other organization in the United States, you would act decisively and quickly to make changes. That way, you could put people in those roles that can make the changes that need to be made. So I was supportive but disappointed.”

Dix and Bertrand were once close allies. Dix directed $15,000 toward Bertrand's campaign account during the Sioux City Republican's first Iowa Senate race in 2010, which he won by a narrow margin. In turn, Bertrand supported Dix's unsuccessful attempt to become Senate minority leader in 2011. When Dix finally got the top job in the GOP caucus shortly after the 2012 general election, Bertrand became minority whip, the number two position in the caucus. He dropped down to an assistant minority leader position before the 2014 legislative session, supposedly in order to focus on his own re-election campaign. But Bertrand was left off the GOP's leadership team entirely this year, when Republicans had majority in the upper chamber for the first time since 2004.

Shortly after the legislative session ended, Dix stripped Bertrand of his committee chairmanship. The decision was never explained publicly; Bleeding Heartland speculated on some possible factors.

“It is time for Senate Republicans to listen and take responsibility for the harassment, discrimination, and retaliation against Kirsten Anderson and other staff,” Hogg added. “This is unacceptable. The idea of a private, internal investigation is ludicrous after the court, the jury, and the public already know the facts and want action to fix the problem.”

I have asked Secretary of the Senate Smithson for further details on the scope of and timetable for his investigation. I will update this post as needed.

Democrats including State Treasurer Michael Fitzgerald have said taxpayers should not be on the hook for the damages awarded to Anderson. When the state legislature comes back this fall for a special session to balance the budget, expect Democrats to raise this issue again. Too many essential services have been cut back already; Republican mismanagement should not add another $2.2 million expense to the general fund.

In his closing remarks before the Iowa Senate adjourned for this year, Dix boasted that Republicans had kept their promises to "make big changes and bold decisions": "At the beginning of this session I said Iowans wanted us to change the way we do business. They wanted us to kick the door in. Well, we accepted that challenge and we kicked the door in."

Unless a court orders it to happen, don't bet on anyone changing the way Iowa GOP senators and caucus staff do business.