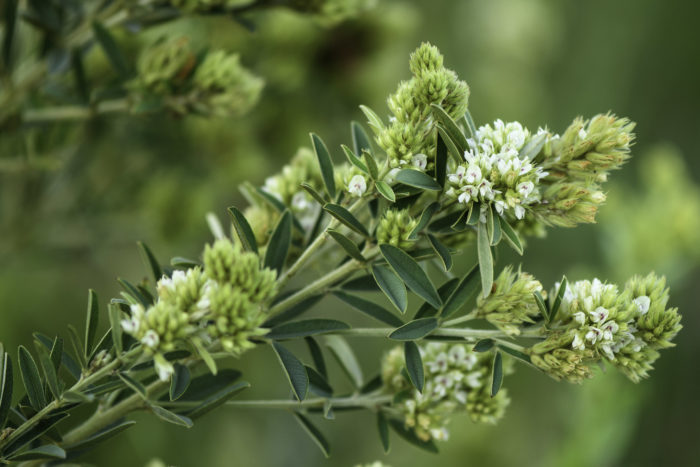 Good fortune struck this week. The talented photographer Wendie Schneider shared some of her wildflower pictures from a Story County prairie, and one of the star attractions was a plant I've been meaning to feature in this series for years.

Round-headed bush clover (Lespedeza capitata) is native to most of North America east of the Rocky Mountains. Sometimes known as rabbit foot or roundhead lespedeza, its flowers are not nearly as "showy" as other late summer prairie attractions, such as blazing star or compass plant or even ironweed. Nevertheless, Wendie told me that round-headed bush clover is one of her favorites: "I am a sucker for anything with a strong silhouette."

According to the Illinois Wildflowers website, this plant "adds nitrogen to the soil, and is easy to grow" in sunny conditions. It can thrive in different types of soil and attracts many pollinators.

In these first four shots by Wendie, that silhouette she mentioned captures your attention: These plants typically grow to heights between two and five feet. Last summer, I found the smallest round-headed bush clover plant I've ever seen blooming, near the Meredith trail in Des Moines:

The flowers are hard to see from a distance and even harder to photograph in my experience, but Wendie captured this beautiful close look.

Round-headed bush clover plants sometimes flop over and appear to be growing almost sideways. Here's another one of my pictures from last summer:

Along the same Des Moines trail, I found colonies of round-headed bush clover and partridge pea growing together:

Here's round-headed bush clover near one of the bonesets, probably tall boneset:

Back to Wendie's photos from Story County. The Illinois Wildflowers site says of this plant, "The flowers are visited primarily by long- or short-tongued bees, such as bumblebees, large Leaf-Cutting bees, Andrenid bees, and others. Butterflies may suck nectar from the flowers, but they are not effective pollinators." Wendie says she's often seen eastern-tailed blue butterflies on bush clovers:

According to Wendie, this butterfly is a southern dogface: