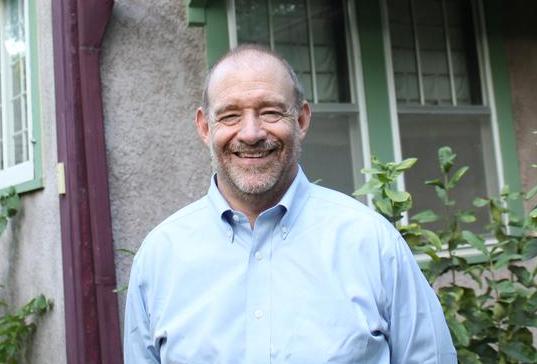 "It's time that we stop fighting with each other and start working on solutions. For most of my adult life, I've been caring for children and helping families improve their quality of life. If I go to Washington, that's what I want to continue." With those words, Dr. John Paschen kicked off his campaign for the fourth Congressional district this morning.

A graduate of Iowa State University and the University of Iowa medical school, Paschen has worked as a pediatrician in Ames since 1990. He declared health care a right in his first speech as a first-time candidate, from the front porch of his home.

Speaking to the Ames Tribune last month, Paschen said his experience as a physician is "the biggest thing I can bring to the table," because "we need people in Congress who are able to know what’s it’s like to actually be the people who are delivering the care."

This morning, he decried attacks on the Affordable Care Act by "Washington insiders and policy-makers who are more concerned about their own reputation than improving access to care." Every Obamacare repeal proposal Congress considered this year would have cut Medicaid and caused many Iowans to lose their health insurance, he added.

In the Ames Tribune interview, Paschen said he decided to run for Congress in July, when eight-term Representative Steve King called for diverting money from food assistance programs to pay for a wall along the border with Mexico. This morning, Paschen said "we must stop the vilification of immigrants," noting that many Iowans' ancestors "faced the same fears and biases that our current immigrants face."

Paschen wants to provide legal status to undocumented immigrants. In today's speech, he said "the brightest and best of those immigrants, the DREAMers, now sleep in fear of being sent back to a country that many of them don't even know. [...] The first thing we have to do to reform our immigration system is get rid of Steve King." (King was among the House conservatives who successfully lobbied GOP leaders not to bring the 2013 bipartisan immigration bill up for a vote on the House floor.)

Other issues Paschen mentioned today included raising the minimum wage, attracting higher-wage jobs to the fourth district, investing in affordable higher education, and quality day care and pre-school. You can learn more about his campaign on its website, Facebook page, or Twitter feed. A short bio of the candidate is at the end of the press release enclosed below.

Three others are also seeking the Democratic nomination in IA-04: J.D. Scholten, Leann Jacobsen, and Paul Dahl. Colin Van Westen covered an event featuring all four contenders in this piece for the Spencer Daily Reporter in August.

The crowded primary field is surprising in light of the long odds against King's eventual challenger. The GOP voter registration edge is substantial in the district's 39 counties: 118,611 active registered Democrats, 191,203 Republicans, and 174,148 no-party voters, according to the latest figures from the Iowa Secretary of State’s office. Donald Trump carried IA-04 with 60.9 percent of the vote, while Hillary Clinton received 33.5 percent. King won re-election last year with 61.2 percent of the vote. He also received more than 60 percent in the 2014 midterm election.

ISU Assistant Professor David Anderson has estimated that about 10 percent of the district-wide Democratic primary vote could come from Story County, containing Paschen's stronghold of Ames. Storm Lake Times editor Art Cullen, who was editor of the Ames Tribune during the 1990s, expressed his support for Paschen in an August editorial.

(AMES) – This morning, Ames pediatrician Dr. John Paschen formally announced his campaign for the United States Congress in Iowa’s 4th District. Paschen, a lifelong Democrat, announced his campaign in his front yard in Ames before a terrific crowd of supporters. Following his announcement will be meet-and-greet events in Sioux City and Storm Lake.

“We have major challenges facing our country ranging from affordable healthcare to quality jobs, and Iowans in the 4th District deserve a member of Congress more focused on getting things done than getting on cable television,” said Dr. Paschen. “We need to get back to the basics of putting politics aside to pass bills and solve real problems, and that’s what I intend to do if given the opportunity to serve in Congress.”

Dr. Paschen is compelled to run due to the complete inability to get things done in Washington. His focus as the next member of Congress from the 4th District will be to: fix our broken healthcare system and make healthcare affordable for all Americans; Bring new, innovative jobs to the 4th District; Bring sanity to our immigration laws; and spend less time hurling insults on cable television and more time passing laws and solving actual problems.

“While there is plenty to celebrate about the ACA, premiums are still too high for millions of Americans, prescription drugs are still too expensive, and there is plenty of room for improved efficiencies,” said Paschen. “Rather than solve the deficiencies in health care, the Republicans want to scrap it and go back to the old days of making simply being a woman a pre-existing condition. That is simply unacceptable. Washington inaction isn’t just tied to health care, it’s tied to everything. They make big promises to create jobs and raise wages, yet name one single thing they have accomplished this year that creates jobs or raises wages? Iowans in the 4th District deserve more than they are currently getting from Steve King.”

John Paschen was born in Illinois and moved to Camanche, Iowa in middle school when his dad transferred jobs at his trucking company. In Camanche, John learned firsthand the importance of agriculture and the value of hard work by working on a farm, raising livestock and becoming an active 4-H member.

After graduating from Camanche High School, John took his passion for agriculture and livestock to Iowa State University where he majored in Animal Science. While at Iowa State John eventually changed majors to pre-medicine, and along the way met the love of his life, Cynthia Oppedal, who he has been married to for 35 years.

Medicine and helping people from all walks of life became John’s calling after graduating from Iowa State, and he went on to medical school at the University of Iowa to earn his MD. After completing his residency training in pediatrics at the University of Minnesota, and following a fellowship in neonatology, John and Cynthia’s first daughter Madeline was born and they moved back to Iowa to raise their family. John joined the McFarland Clinic in Ames as a general pediatrician and their second daughter, Emma, was born.

In addition to his work as a pediatrician, John has served has served as president of the Child Abuse Prevention & Education Council and is currently the Chairman of the Story County Board of Health. He is active with Operation of Hope, a nonprofit delivering medical care during annual mission trips to Zimbabwe. He has also completed medical mission trips to Mississippi, Guatemala and the West indies.

Frustrated by inaction in Washington combined with a lifelong passion for helping people, John has announced his candidacy for Congress. This is his first run for public office.