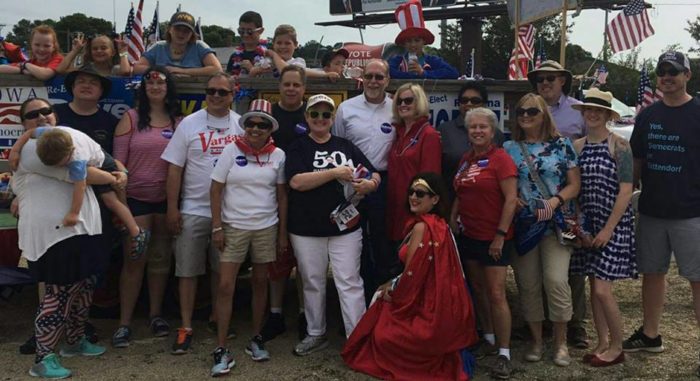 How three new activists got involved in Scott County

In the last year, we have seen a flood of new energy and political involvement throughout the country, from the Women’s March, to the Indivisible movement, to protests, letter-writing campaigns, and citizens showing up at forums to confront their elected officials.

We have also seen a great deal of new people get involved with the Scott County Democratic Party since the election. We spoke with a few of our newer activists to ask how they decided to get involved and what their experience has been like.

Cassandra Erwin was motivated to act during to the 2016 election. “I saw an extremely qualified candidate being bulldozed and it really revved me up,” she said.

She said, “Right off the bat, I worked on the presidential campaign and although we had a crushing defeat, we still had a really great resolve.” After the election, Cassandra was a devoted volunteer during the special elections to elect Jim Lykam to the Iowa Senate and Monica Kurth to the state House of Representatives. From there, she got even more involved.

“I was invited to work on a local Women’s March in January with a couple of party activists and organizers. I had already begun attending Central Committee meetings and also was invited to a Q & A for folks considering a future candidacy,” she said. Cassandra added, “There were so many opportunities to get to know the local people, I was very grateful. Now I sit on a city commission and am very active in local politics.”

One of Cassandra’s main worries in getting involved came from her family responsibilities. “I’m a single mom, so sometimes circumstances work out where I have to bring my son along. Everyone was amazing to us. People chatted with him, joked about his political future starting so young, and asked about the games he would play on his iPad,” she said. “He did get offered a few too many candies and sodas at times though,” she joked.

Since Cassandra is not from the Quad Cities originally and does not have family in the area, joining the party gave her a real sense of belonging and community. She said, “I feel like I’m really lucky now to have what I consider a bit of an extended family that includes our statehouse representatives. That’s really the way it should be.”

As many have noted, the Scott County Democrats have completely revamped their website, email platform and social media outreach. Much of that work has been done by a newer activist, Tim D’Avis. Tim is the co-chair of the Technology Committee.

“Like a lot of folks, the election result horrified me, and that motivated me to become more involved politically. I decided the best way that I could get involved would be with the local party and local campaigns – applying my technology background in order to help Democrats and Progressives win elections,” he said.

Tim found ways to get involved through social media. He said, “through a Facebook group, I found out about candidate and campaign worker FAQ hosted by the Scott County Democrats. That led to discovering the Central Committee. I had no idea such a thing existed.”

He continued, “The Central Committee was a bit daunting at first – there are a lot of established rules and it seemed like everyone knew each other except me. I just kept coming back and listening, and eventually talking a bit. Within a few months I was nominated to our newly-minted technology committee.” Tim feels that the party has been extremely receptive to help and advice he has offered.

“My key goal now is to make the path to involvement and activism a little clearer for folks who are so motivated,” he said. “We need to make the party more discoverable, and work on ways to empower individuals to take action wherever possible. A lot of our committee’s new energy is devoted to digital communications and outreach but the tried and true methods still work, and will work better with more people knocking doors and dialing phones.”

Emilene Leone was a politically active teenager and volunteered with the Scott County Democrats during the mid-90s. But after getting married and starting a family, she found that she drifted away from political involvement.

“I didn’t really pay much attention to politics, except to presidential elections. I was an every-4 years kind of voter. I didn’t volunteer, and I didn’t vote in city council or school board elections. I was busy with my family and kind of assumed that other people who knew more about politics than me could take care of it.”

Like many, she followed the 2016 election closely and was shocked and disappointed when Donald Trump won. “I decided I couldn’t just sit back and hope other people did the work. I knew I had to get involved,” she said, “I had to do get involved for my kids, to make their future better.”

“It was very confusing at first, because I didn’t understand the party structure, or how the meetings worked. They seemed so formal, and I wasn’t sure what I was supposed to do. It was a little intimidating, but the party veterans were so welcoming and encouraging. At first, I just came to meetings and listened, but when opportunities for action were presented, I volunteered. I helped wherever I could, whether it was taking photos at event, marching in parades or organizing events. I even started up the first neighborhood Democrat group in Scott County, the Davenport Eastside & Bettendorf Democrats group, with the blessing and encouragement of our county chair, Thom Hart.”

Emilene joined the Communications Committee and has been hard at work as the Messaging Chair. She enjoys traveling to Democratic events around the state as a representative of the Scott County Democrats. She is a welcoming face at our socials and enjoys helping other new people feel wanted, appreciated and heard.

When asked what she would say to people who are looking to get involved, Emilene gave the following advice: “It’s like any organization, whether it is a political party, or a corporation, or a church, or a non-profit…if you show up and expect people to kiss your feet for attending a meeting, you are going to be disappointed. You have to show up, listen, learn how the meetings work, and when you see a chance to help, volunteer yourself and show that you are ready to work. It means doing things like sweating in 90-degree heat as you walk in a parade, or knocking on doors to hand out fliers for events. It’s not glamorous work, but it is important and needs to be done if we want to have a stronger party and government.”

“But,” she added, “it’s rewarding work, knowing you are making a difference. And I have gained so many amazing friendships within the Scott County Democrats and throughout the state. Getting involved has been a lot of work, but definitely a lot of fun too.”

The Scott County Democrats have been excited to see so many new faces join us this year, and are appreciative of the fresh ideas, outlooks and skills they bring. The 2016 election was a wake-up call to many, and we are thrilled to see what we can all accomplish together. 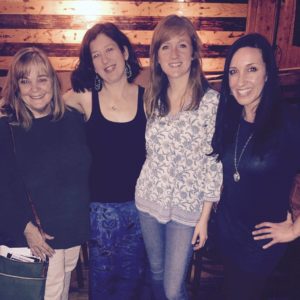