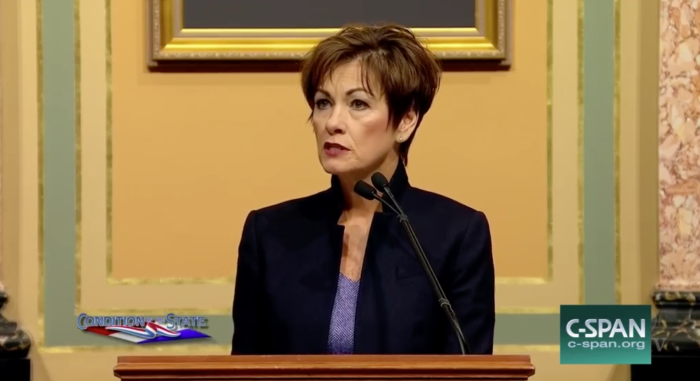 The Department of Human Services, state universities, and Department of Corrections would have to absorb large mid-year spending cuts under recommendations Governor Kim Reynolds released this week. The governor's focus is strikingly similar to cuts her predecessor Terry Branstad proposed and Republican lawmakers approved in early 2017.

For a second straight year, state legislators must pass a "deappropriations" bill to keep the budget balanced. The non-partisan Legislative Services Agency estimated last month that state revenues will be about $37 million short of planned expenditures during fiscal year 2018, which ends on June 30.

The governor's draft budget document for fiscal year 2019 recommends current-year spending cuts totaling more than $27 million. The cuts would have been deeper, but the state expects an additional $11.2 million in current-year revenue due to the federal tax reform Congress approved in December (see page 63).

Reynolds proposes pulling most of the money from three areas:

• Human services--$10 million from Medicaid and $3.3 million from the rest of the Iowa Department of Human Services budget.

Department spokesperson Matt Highland told me, "The $10 million adjustment to the medical assistance budget reflects a trend downward in estimated need." He further explained, "The additional $3.3 million is largely the result of nominal surpluses due to lower caseloads and maximizing the use of available federal block grant funds."

• Higher education--$5.1 million from the Board of Regents, which oversees the state universities, and $1.8 million from community colleges.

Board of Regents Executive Director Mark Braun said in a statement, "Any reduction is challenging, but the Board recognizes the current fiscal situation the state is facing. We will work with our institutions to make any required FY18 reductions in ways that have as little impact on students as possible." On behalf of the board, Braun expressed appreciation that Reynolds proposed an increase in Regents funding for fiscal year 2019.

You can see on page 84 that the board had requested nearly $13 million more in state funding for the coming fiscal year. The governor's draft budget would provide about $2.4 million more to the Regents as a whole. However, Reynolds is proposing to cut total state funding to the University of Iowa and Iowa State University by about $2.4 million and $1.9 million, respectively (see page 83). The Regents had requested status-quo budgets for both universities.

Department of Corrections spokesperson Cord Overton told me, "As these numbers were just recently released, the department is analyzing the impact of the proposed adjustment. We will be working with the leadership and financial managers of each institution and community based corrections district in the coming days to identify the most effective path forward."

Also worth noting: the governor is asking legislators to reduce appropriations to the judicial branch by $1.6 million before June 30. Iowa Supreme Court Chief Justice Mark Cady warned in his State of the Judiciary speech on January 10 that insufficient funding for the courts is "beginning to tear at the very fabric of our operation and mission." He noted,

There are 182 fewer people working in the Iowa court system today compared to a year ago. There are 11 judgeships that are unfilled and about a dozen current judges plan to retire. Cady said “essential” court operations are suffering, with courtroom delays more common, the backlog of cases growing and the problems are worst in rural counties.

“There are fewer judges, fewer court reporters, fewer case schedulers and fewer juvenile court officers,” Cady said. “It means there is a daily struggle to coordinate and deliver services. It means Iowans are losing access to justice.”

Meanwhile, Reynolds wants to remove $462,871 from the Iowa Department of Public Health during the last five months of the fiscal year. That department took a major hit in the budget Republicans approved during the 2017 legislative session. State funding for the current-year Department of Public Health budget is $5.8 million (about 10 percent) lower than it was during the previous fiscal year. (Federal funds account for roughly half of the department's operating budget.)

The governor is proposing a $2.2 million increase in the department's appropriation for fiscal year 2019 (see page 85). But her budget would allocate $181,487 less to the "addictive disorders" line item than the department requested--an odd decision, given her remarks about tackling addiction during the Condition of the State address.

State lawmakers are not required to follow the governor's recommendations as they draft the deappropriations bill. I don't expect them to deviate much from Reynolds' suggestions, though. House and Senate Republicans mostly followed Branstad's lead last year.