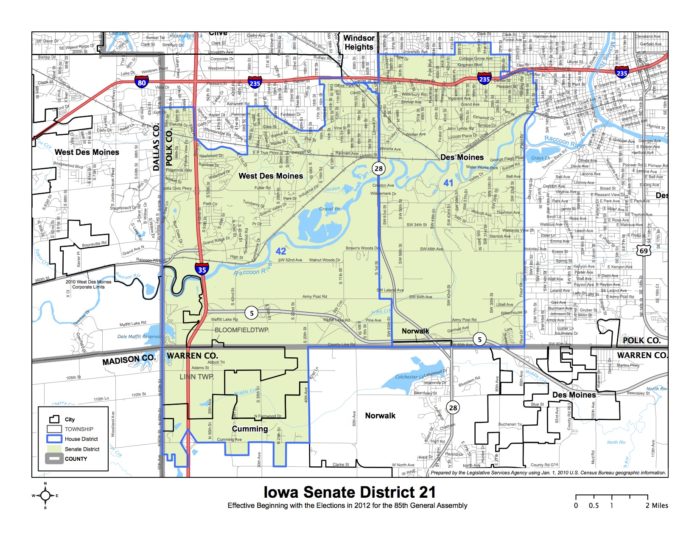 State Senator Matt McCoy announced yesterday that he will run for Polk County supervisor rather than for re-election to the Iowa legislature. His decision to challenge longtime Supervisor John Mauro in the Democratic primary sets up a "epic battle of the titans" in the fifth district, covering the south side of Des Moines, much of the city center and south of Grand areas on the west side. It also opens up Democratic-leaning Iowa Senate district 21.

Connie Ryan rolled out her candidacy yesterday but will likely have competition in the June 5 primary.

The Democratic nominee will almost certainly win in November. McCoy was unopposed in 2014. The latest figures from the Iowa Secretary of State's office indicate that the district contains 17,539 active registered Democrats, 11,295 Republicans, and 11,099 no-party voters. In the last general election, Hillary Clinton received 60 percent of the vote in Senate district 21 precincts, Donald Trump just 33 percent. Bruce Braley outpolled Joni Ernst here by 56 percent to 40 percent in 2014, even as he lost the U.S. Senate race by eight points statewide.

In an interview with Pat Rynard for the Iowa Starting Line podcast, McCoy said he doesn't plan to endorse a candidate for Senate district 21: "I'm looking for a good, competitive primary, and I'm absolutely thrilled to hear some of the names that I've been hearing. And every single one of them has a unique set of skills that they would offer." McCoy will focus on state legislative work and the Polk County supervisor's race over the next four months.

I followed up with the nine Democrats Rynard named yesterday as possible contenders in Senate district 21.

At this writing, the only confirmed candidate is Connie Ryan, longtime Interfaith Alliance of Iowa executive director. (Disclosure: I've supported that non-profit for many years, spoke at its annual event last May, and currently serve on a fundraising committee for its endowment.) Ryan spends countless hours at the state capitol during every legislative session, lobbying on a wide range of issues related to separation of church and state, public education, civil rights, and keeping courts free from political pressure. She also chaired the Justice Not Politics coalition, which advocated for retaining Iowa Supreme Court justices.

Excerpts from her January 31 press release:

"I have worked all of my life advocating on behalf of people," Ryan said. "I want to bring my passion for the rights every Iowan should enjoy and be a voice for everyday Iowans at the Iowa Statehouse. I am in it to win it with the help and support of my neighbors throughout the district."

Ryan grew up in Des Moines after moving to Iowa when she was 10 years old. She attended Roosevelt High School, where her two adult children also graduated. She earned her bachelor's degree from Drake University and her master’s degree from the University of Iowa.

Ryan has served as the Executive Director of Interfaith Alliance of Iowa for more than 15 years. She is a well-known voice across Iowa advocating for the civil rights and equality of all Iowans.

"I love Iowa and the promise it brings to each of us,” she said. “However, the Iowa Legislature must get down to the business of focusing on every day Iowans and the needs in our communities; both urban and rural. All Iowans deserve to be treated with respect and dignity, and that is not happening because of the extremist legislation the current Legislature is debating these days. Iowans deserve better. They deserve to have their rights protected and opportunities expanded.”

Ryan promised to focus her energy in the Iowa Senate on key priorities that will improve the lives of more Iowans.

"We must stand with women and their rights to make healthcare decisions without government interference,” she said. “Women are more likely to succeed when they have control of and can choose the direction of their lives.

"We must stand with our public schools and ensure adequate funding that enables every child to succeed and our communities to be strong.

"We must stand with every worker and their right to a living wage, fair bargaining rights, and a level playing field to raise their families.

Organized labor endorsements could become important in this primary, as many union members live in Senate district 21.

Nate Monson, who has been executive director of the LGBTQ advocacy group Iowa Safe Schools since 2007, commented, "I think its important to have an LGBTQ voice in this race. Talked with folks around the state and there is an urgent need, especially after [a transgender] bathroom bill was brought up today, to have that voice. My biggest question is if I can raise the $150,000 needed to win."

After a lot of consideration, I've decided to not run for the Iowa Senate. It's a difficult task to run for office and run a statewide organization at the same time. I have a good friend running in Connie Ryan and know she will represent the district well and advance progressive causes. Can't wait to get to work for Connie!

Over the past few days, I've had incredible conversations with many great LGBTQ community members about the need for more LGBTQ elected officials in our state. We may be down to just one out legislator next year which puts our community at risk. There's too much at stake for our community to not be represented. I've decided to relaunch this idea I've had in the past - the Iowa Pride PAC. This state PAC will be dedicated to supporting LGBTQ candidates for office at the school board, city, county, and state level. It's our time as a community to be represented across the government. I need all of your help to do this and we'll have a lot more news in the coming days on ways we can support our community. You can donate online at www.iowapridepac.com

Pete De Kock, a former district director for U.S. Representative Bruce Braley who moved to Des Moines a few years ago, told me he's has been discussing a possible candidacy with family and friends. "I appreciate being considered among the excellent group of potential and announced candidates. The person who wins this primary must be a strong advocate for their constituents, and understand the opportunity they have to help build a resilient and inspiring Democratic Senate Caucus."

Trial attorney Michael Kuehner told me by phone he is actively considering the race. Background from his law firm's website:

His practice includes general litigation matters with an emphasis on commercial litigation, personal injury, white collar criminal cases and property loss claims. Prior to joining Grefe and Sidney, Michael worked in legislative policy and appropriations in the United States Senate. Michael also clerked in the Iowa Attorney General’s Office and the United States Attorney’s Office for the Northern District of Iowa.

Claire Celsi, the Democratic challenger who gave State Representative Peter Cownie the scare of his political career in her 2016 race for Iowa House district 42, declined to comment on whether she might run for the state Senate this year. Democrat Kristin Sunde announced earlier this month that she is running for Cownie's House seat.

FOUR DEMOCRATS RULE THEMSELVES OUT

Well-connected lobbyist David Adelman told me, "I am flattered but will not be running at this time. There are many great candidates and look forward to a robust primary."

Kirsten Anderson, who became a Democrat last summer after winning a sexual harassment lawsuit relating to her treatment as former Iowa Senate Republican communications director, told me, "I'm a 'no' right now for running for office."

Ryan Crane, director of charitable giving for the Community Foundation of Greater Des Moines, told me, "This is not the right time for me to consider a Senate run personally, but I look forward to staying involved and engaged in the West Des Moines community."

I’m enthusiastically supporting Connie Ryan. The legislature is in need of an overhaul, and I am disgusted by the Republican attacks on public education and workers rights, and their inability to balance a budget. However, running and serving requires full and complete commitment. With a relatively new law practice and two young kids, I can’t give the Iowa Senate my full commitment right now. Maybe at another time I will, but at the moment I’m grateful to have a candidate with the experience, wisdom and dedication to justice that Connie Ryan will bring to our district.

Shayla and her husband John McCormally, a member of the Iowa Democratic Party's State Central Committee, are active supporters of the Interfaith Alliance of Iowa.

Any comments about the Iowa Senate district 21 or Polk County supervisor primaries are welcome in this thread.

P.P.S.--Speaking of epic primary battles, Des Moines Cityview's Civic Skinny speculates this week that former State Senator Jack Hatch may try to get his old job back. That would require running against Senator Tony Bisignano in Senate district 17, which Hatch vacated in 2014 in order to run for governor.