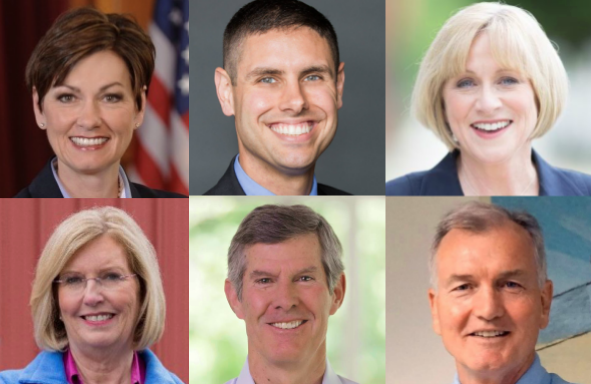 IA-Gov: Kim Reynolds below 45 percent against every Democrat

I would have expected larger leads for Reynolds, since she has much higher name recognition than the Democratic candidates, and she receives substantial news coverage for free. The governor is in positive territory on job performance (47 percent of respondents approve of her work, 33 percent disapprove, 20 percent unsure) and favorability (48 percent vies her favorably, 32 percent unfavorably, and 20 percent unsure). In addition, the Selzer poll found 49 percent of Iowans see the state moving in the right direction, just 39 percent on the wrong track. Those are decent numbers for an incumbent.

Another plus for Reynolds: she had $4.14 million in her campaign's bank account at the end of 2017, and she's hasn't spent much of it so far. While Hubbell, Boulton, and Glasson have been running television commercials in the Des Moines and Cedar Rapids markets, Reynolds and acting Lieutenant Governor Adam Gregg have been touring the state, earning local media coverage while holding campaign-style events to tout their administration's accomplishments. That "Unleashing Opportunity" tour--all billed to the state as part of the governor's "official" duties--has stopped in Mason City, Marion, Muscatine, Davenport, Maquoketa, Ames, Fort Dodge, Storm Lake, Pella, Oskaloosa, Ottumwa, Newton, and Cedar Falls. None of those visits cost the Reynolds/Gregg campaign a dime.

Final note: the poll did not test Reynolds against the other two declared Democratic candidates, probably because Jon Neiderbach and Ross Wilburn have almost no money to spend on their campaigns (see here and here). The other five candidates all went into the election year with enough funds to run a credible statewide effort before the June 5 primary. Cash on hand totals as of December 31, 2017:

From the memo published on the Des Moines Register's website: 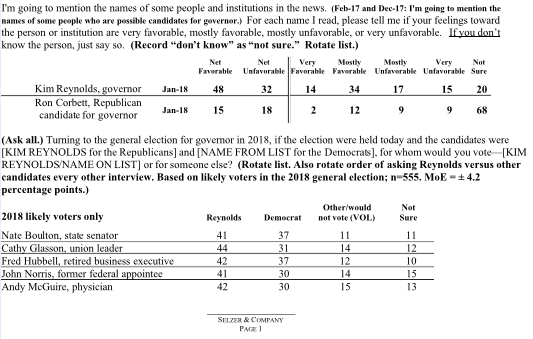