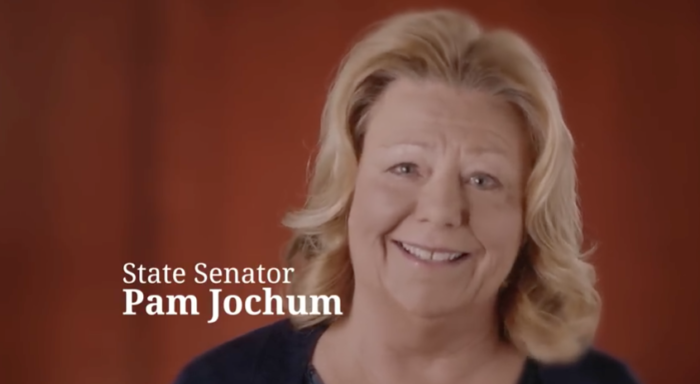 Six of the 23 current state lawmakers who have endorsed Senator Nate Boulton for governor speak on his behalf in a television commercial that began airing today in the Des Moines and Cedar Rapids markets. It's the second spot Bolton's campaign has released as part of a buy that will run through the February 5 precinct caucuses, at which Democratic activists will elect county convention delegates.

The ad appears to be designed to shore up Boulton's support among older Democrats, who make up a larger portion of Iowa's electorate than many people realize.

State Senator Bill Dotzler, speaking to the camera: I have served with four governors.

State Representative Bruce Hunter, speaking to the camera: When Republicans went after protections for Iowa workers,

Voice of State Representative Amy Nielsen: women’s health care [images of Boulton speaking to Iowans who came to the state capitol to oppose Republican bills during the 2017 legislative session]

Steckman, speaking to camera: Nate took on Branstad and Reynolds.

Voice of Dotzler: A champion for workers. [more footage of Boulton with Iowans, NATE BOULTON FOR GOVERNOR on screen]

Voice of Jochum, then Jochum speaking to camera: It’s in his gut. Just what you expect from a small town Iowa kid.

Bolkcom, speaking to camera: I like the other candidates too,

Dotzler, speaking to camera: but it is time for a new generation.

Voice of Bolkcom: That’s why I’m with Nate. [more footage of Boulton with workers]

Voice of Jochum: Nate Boulton for Governor. [footage of Boulton smiling at an event; NATE BOULTON FOR GOVERNOR]

Candidates for statewide office often recruit support from state lawmakers, but I can't recall another Iowa political commercial with legislative endorsers doing all the talking. The purpose seems to be threefold:

Improve Boulton's standing with older voters. The five lawmakers who appear on screen are all long-serving veterans. Steckman was first elected to the legislature in 2008, Hunter in 2003, Dotzler in 2002, Bolkcom in 1998, and Jochum in 1992. Nielsen, a younger lawmaker serving her first term in Iowa House, says a few words in the spot, but she doesn't speak directly to the camera like the others.

Iowa's population skews older than the national average, and older people are more likely to turn out than are younger generations. Nearly half of the 101,098 Democrats who voted in the 2016 primary were at least 65 years old, according to the statewide statistical report. Nearly 80 percent of those who cast ballots in that primary were over 50. Only about 20 percent were between the ages of 18 and 49.

This year's Democratic primary should attract many more voters, thanks to competitive races in three Congressional districts as well as for governor and secretary of state. The electorate may include more young voters than we've seen in the past. (Unfortunately, a statistical report showing the age breakdown of 2006 Iowa Democratic primary voters is not available on the Secretary of State's website.) Still, it's a safe bet that Iowans over 50 will cast most of the ballots.

Appealing to older voters will also be important for the party's gubernatorial nominee in the general election. More than half of the 1,572,633 Iowans who voted in November 2016 were over age 50; more than a quarter were over age 65. The trend was more pronounced for the 2014 midterm: more than 30 percent of the 1,135,138 Iowans who cast ballots that year were over 65, and 33 percent were between 50 and 64.

Democrats would love to increase turnout dramatically among younger age cohorts in 2018. But there aren't enough millennials and Gen X-ers in Iowa to elect a governor who doesn't resonate with older voters.

Although every candidate for governor has supporters in all age groups, anecdotally I sense a lot of resistance to Boulton among Democrats over 50. The older activists seem more drawn to contenders who have had longer careers: Fred Hubbell, John Norris, or Andy McGuire. I suspect Boulton's internal polling revealed the same problem. (Boulton's financial disclosure shows $16,250 spent on polling by The Feldman Group and two other expenditures totaling $40,000 for "research" by the same Washington-based firm.) Dotzler, Steckman, Bolkcom, Hunter, and Jochum are looking straight at viewers and assuring them that this young guy is ok. He has the skills and the smarts.

A secondary purpose of the new spot is to bolster Boulton's support among progressives. Bolkcom and Jochum in particular are popular on what Paul Wellstone used to call the Democratic wing of the Democratic Party. Cathy Glasson has picked up a lot of endorsements from "Berniecrats" and is now featuring her call for single-payer health care (popular on the left) in a television commercial also running in Des Moines and Cedar Rapids.

In addition, the lawmakers featured in Boulton's new ad hail from cities with relatively large numbers of Democratic voters: Waterloo (Dotzler), Iowa City (Bolkcom), Dubuque (Jochum), Des Moines (Hunter), and Mason City (Steckman). You can't win a statewide primary by crushing it in one or two metro areas. Breadth of support is critical.

Any comments about the governor's race are welcome in this thread. Click here for a list of all state lawmakers who have endorsed Boulton, Hubbell, Norris, or McGuire. I am not aware of any legislators endorsing others in the Democratic field.

Final note: Jochum says in this ad, "I’ve never seen a leader like Nate Boulton." That's quite a thing for a lawmaker with 25 years experience to say about a colleague just starting his second year in the Senate. At a Dubuque event on Boulton's launch tour last spring, Jochum acknowledged another factor that influenced her choice. Pat Rynard reported for Iowa Starting Line at the time,

“I’ve been in the Statehouse long enough to know that the longer you’re there, the longer your voting record, the more they have to shoot holes in you,” Senator Pam Jochum, Boulton’s official campaign chair, told the crowd in Dubuque. “If you aspire to higher office, you need to do it sooner rather than later … He may be a newcomer to the Statehouse, but believe me, he is not a newcomer when it comes to workers’ rights, to women’s rights, to healthcare, to voting rights.”

Many Democrats who favor Boulton have echoed that sentiment in private conversations over the past year. I understand the line of thinking, especially after six Iowa Senate incumbents lost their seats in 2016. But rest assured, Governor Kim Reynolds' team is working up talking points to use against each of her potential opponents. She or the Republican Governors Association will run negative ads against the Democratic nominee. There is no rainbow unicorn candidate who would be immune from Republican attacks.