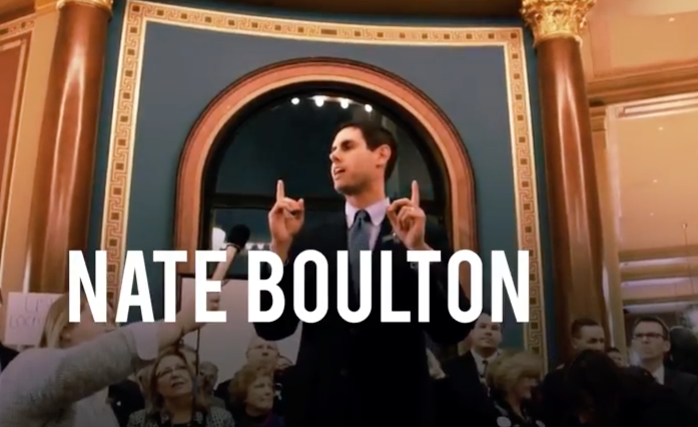 Fred Hubbell, Nate Boulton up on tv ahead of Iowa caucuses

Hubbell has been on the air for months, having raised well over $1 million since last summer. Boulton's campaign war chest is likely to be substantially smaller--we'll know for sure when all the 2017 finance reports are published later this week. While candidates normally conserve their cash to use on television and radio spots closer to the primary, Boulton has good reason to spend some money now.

Side note: the Iowa Democratic Party has already apportioned county convention delegates for each precinct across the state and determined how many state convention delegates each county will receive. Those numbers are based largely on how many votes were cast in each precinct and each county for Hillary Clinton in the 2016 general election and for Democratic gubernatorial candidate Jack Hatch in the 2014 general election.

Female voice-over: Fred Hubbell spent his life delivering for Iowa. [viewer sees footage of Hubbell talking to someone, with cornfield in background]

and Fred helped clean up the film tax credit scandal. [footage of Hubbell from when he stepped in to lead the Iowa Department of Economic Development during the Culver administration; words on screen "Fred Hubbell ending taxpayer funded giveaways"]

Today, he’s speaking out against reckless tax giveaways like Apple. [footage of Hubbell speaking to rally and shot of a building with an Apple Corporation logo; words on screen "Fred Hubbell ending taxpayer funded giveaways"]

Fred Hubbell has delivered for Iowa before, and has the vision to get it growing the right way. [footage of Hubbell talking with young people; closing shot has Hubbell standing in front of the cornfield, with campaign logo visible on screen]

Nate Boulton. As senator, Boulton went toe to to with Branstad and Reynolds, [footage of Boulton speaking to protesters in the capitol rotunda and on the Iowa Senate floor during the 2017 session; words on screen NATE BOULTON STATE SENATOR "Leading the Democratic Opposition" The Hawk Eye, 5/5/17]

Now, he's running for governor [footage of Boulton shaking hands and talking with people at events, words NATE BOULTON FOR GOVERNOR on screen]

A new generation of leadership for Iowa. [footage of Boulton speaking to a group with an American flag in the background. Words NATE BOULTON A NEW GENERATION OF LEADERSHIP on screen]

Boulton for Iowa. [shot of the candidate with NATE BOULTON FOR GOVERNOR on screen]