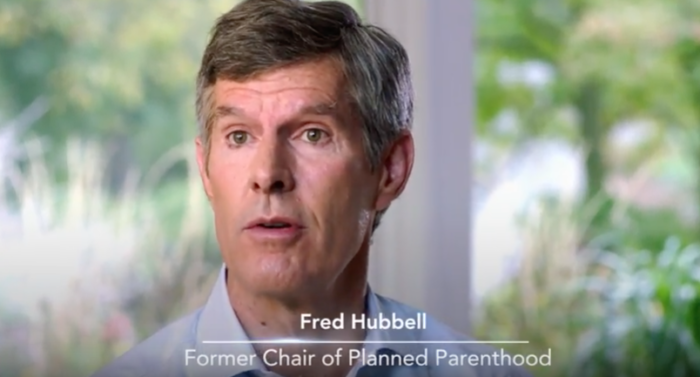 The first television commercial promoting Fred Hubbell for governor begins running today "as part of a statewide six figure TV and digital buy." I'm not aware of any Iowa candidate advertising so extensively so far in advance of the following year's primary. (Jack Hatch launched his gubernatorial campaign's first ad nearly ten months before the 2014 primary, but that spot ran for just four days, and only on Des Moines broadcast networks.)

Opening campaign commercials are often biographical. Notably, Hubbell chose to introduce himself to Iowa television viewers by emphasizing his commitment to Planned Parenthood rather than his extensive business career. It's the latest sign that his early internal polling showed a strongly positive response when Democrats learned about Hubbell's support for a leading women's health care provider.

In the crowded field of seven Democratic contenders, only Hubbell has the resources for television advertising on this scale more than seven months before the 2018 primary. He raised more than $1 million during his first few weeks as a candidate and more than $400,000 from the host committee alone at a high-dollar fundraiser last month. His campaign has also sent numerous e-mail appeals for small donors, as many or more than any of his rivals. We'll learn how successful those efforts have been when the campaigns file financial disclosures in January.

Hubbell continues to speak, seated next to his wife, Charlotte Hubbell: And we were threatened with protests at our downtown store in Sioux City. [Small campaign logo that reads FRED HUBBELL GET IOWA GROWING appears near bottom of screen, remains for rest of commercial]

Charlotte Hubbell speaks: We've been working with Planned Parenthood for over 30 years.

Camera shifts back to Fred Hubbell: Some people said, "Well, maybe you should get off the board of Planned Parenthood. We don't want to hurt our business."

View of both Hubbells, Fred continues speaking: Charlotte and I talked about it, and we decided, look, I'm on the Planned Parenthood board for a reason, and I want to stay on the board for that very good reason. [viewer sees footage of mothers with children]

They've provided excellent service in our community, including all around the state of Iowa. [viewer sees Hubbell, then footage of a father and daughter]

And I felt that our customers needed to have access to good quality, affordable health care, [more footage of ordinary families]

So I was not going to back down. [ad ends with shot of Fred and Charlotte Hubbell and campaign logo]

Hubbell's ad is a solid opening pitch on several levels. For voters who may be skeptical that a wealthy person shares their values, the story underscores that some principles were more important to him than the bottom line for the business he was running.

The substance should resonate with many people, especially women. Pro-choice voters now dominate the Iowa Democratic primary electorate, a shift from generations past, when a substantial number of Democratic activists and politicians here opposed abortion rights.

Furthermore, Planned Parenthood has been in the news more than usual this year, due to Republican lawmakers' unwise and expensive decision to create a new state-run family planning program, excluding abortion providers. That move wasn't just unpopular with Democrats. About three-quarters of Iowans, including most self-identified Republicans, favor continued state support for non-abortion services at Planned Parenthood.

The loss of state funding prompted Planned Parenthood to shut down clinics this summer in four Iowa communities, including Sioux City.

Several gubernatorial candidates denounced the GOP's policy toward Planned Parenthood at the Iowa Democratic Party's Hall of Fame event in July. Hubbell didn't mention his past service to the non-profit during that stump speech, his first at a large party event. You can listen here.

I suspected the numbers on Planned Parenthood must have been sky-high when I heard Hubbell speak to the Poweshiek County Democrats' picnic in Grinnell the last weekend of August. You can listen here:

Starting around the 4:00 mark, Hubbell recounted how he served on the Planned Parenthood board for eight years. He described how Jill June came to him during the 1990s, saying no one in Dubuque would rent the organization a space or sell them a building so that they could open a clinic. (Like Sioux City, the heavily Catholic community of Dubuque has traditionally been home to many fervent opponents of Planned Parenthood.) Fred and Charlotte Hubbell helped arrange for a new clinic that has since served thousands of women and men.

Planned Parenthood has remained part of Hubbell's stump speech. From his remarks at the Progress Iowa Corn Feed in early September:

The woman who was running that was having trouble getting into Dubuque. A lot of people were trying to get services from Planned Parenthood in Dubuque. They wouldn’t–nobody up there would rent them a building or sell them a building.

So they came to myself and my wife, and they said, is there something you can do to help? We can’t get up there, and a lot of people need our services. So we thought about it, we looked around, we tried to figure it out. We helped them open in Dubuque. We got them a building.

But you know what? These same people who are sending the money out of state, they defunded Planned Parenthood, so now there’s clinics all across eastern Iowa that have been closed. That’s not what we want. That’s not the kind of leadership that we need.

Hubbell discussed his support for Planned Parenthood during a recent interview with Iowa Starting Line:

“At Younkers we had 5,000 employees, but a majority of them were female,” Hubbell noted. “Most of our customers were female … Charlotte and I made a decision, I could work with Planned Parenthood and help them provide cost-effective healthcare. And it was important to provide good, quality healthcare to people in Central Iowa, but also to our employees. I wanted to make sure that that kind of healthcare was available not just to men, but to women also.”

Hubbell joined Iowa’s Planned Parenthood board in 1982 and would become the board president in 1985. He particularly liked that they had a sliding scale for how much patients had to pay, making quality healthcare access easier for lower-income Iowans.

“I saw an opportunity to help an organization that was doing a lot of good in our community, but was under a lot of external pressure,” he said. [...]

Pro-life activists in Northwest Iowa soon targeted Hubbell and his business for his involvement in the group. They threatened to picket the Younkers in Sioux City, sent letters to Younkers’ headquarters and called managers at their stores about Hubbell’s role on the Planned Parenthood board. Hubbell didn’t back down in his support. [...]

Pickets and protests cropped up again soon after, aimed at Planned Parenthood’s new headquarters in Des Moines, a project that Hubbell was the fundraising co-chair for.

“They’d stand out there and hurl threats and say all these nasty things to the employees or patients going in the door,” he said. “We had to organize a way to get the patients in there without having to go through that gauntlet.”

The "Get Iowa Growing" slogan on Hubbell's campaign logo indicates that jobs and economic development will be major themes in the months ahead. (The candidate already talks at length about those issues on the stump.) But the first thing many Iowans will learn about Hubbell will be that under pressure, he stood by Planned Parenthood. That can't hurt in a Democratic primary.

Any comments about the governor's race are welcome in this thread. I enclose below the news release announcing Hubbell's opening ad.

Final note: earlier this week, Hubbell's campaign announced support from five more Democrats serving in the Iowa House and eight more former lawmakers. Most of the current and former legislators who have endorsed gubernatorial candidates are backing either Hubbell or State Senator Nate Boulton. Click here for details.

In First TV Ad, Fred Hubbell Vows To Stand Strong By His Lifelong Progressive Values And 'Not Back Down'

Positive Ad Features Hubbell As A Lifelong Progressive Fighter Standing Strong To Expand Access To Quality Health Care Despite Threats, Saying 'I Was Not Going To Back Down.'

In the first television ad of the Iowa gubernatorial race, Fred Hubbell, Democratic candidate for governor, highlights his lifelong commitment standing strong by his progressive values. As Republicans continue to undermine the health care of Iowans, from the disastrous privatization of Medicaid to the defunding of Planned Parenthood earlier this year, the ad points to Fred as someone who "will not back down" from any fight to improve the quality of life for all Iowans.

While serving as Chairman of Younkers in the 1980s, Fred also served on the Board of Planned Parenthood of Mid-Iowa, serving as Chair of the Board in 1985. It was during this period, anti-choice activists threatened to protest the Younkers store in Sioux City because of Fred's affiliation with Planned Parenthood. Despite questions from friends and business colleagues about whether to resign from Planned Parenthood to avoid jeopardizing Younkers business, Fred and his wife Charlotte stood by their beliefs that every Iowan should have access to good quality health care, and decided Fred would "remain on the board."

In this campaign, Fred has made expanding health care a key pillar of his campaign, discussing the vital need to reverse Medicaid privatization, restore funding for Planned Parenthood, and address our mental health crisis. While barnstorming the state over the past four months, Fred has been building momentum behind his vision to put people first again in this state, starting, first and foremost, by expanding health care to ensure every Iowan gets the quality, affordable, and accessible care they deserve.

"Fred Hubbell is a lifelong progressive fighter who has never backed down from his values and has the skills to get results for Iowans," said Michelle Gajewski, Hubbell for Governor campaign manager. "Every day we hear from Iowans all across the state telling us how Fred has made a real difference in their lives. Whether it’s his work leading Planned Parenthood to make quality healthcare more accessible across the state or his support of Broadlawns Medical Center to help expand access to mental health treatment, Fred is and always has been a leader who leads with his heart. He will put people first again in Iowa and do what is right by them."