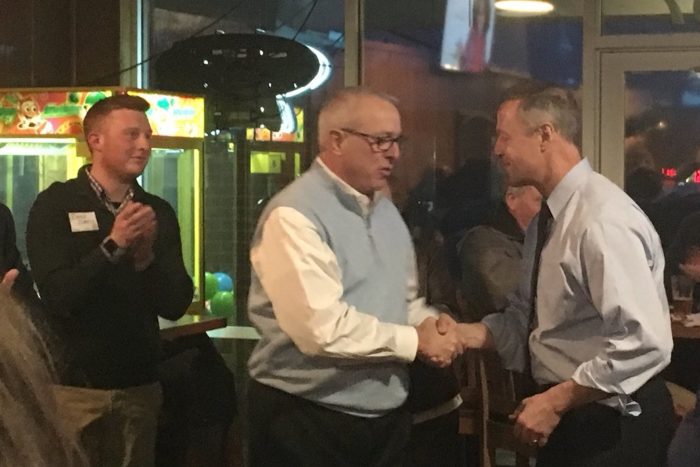 Martin O'Malley keeping the focus on other Democrats, for now

"Are you excited to have someone to rally around to send to Des Moines?" former Maryland Governor Martin O'Malley asked a packed room in Clive at the February 12 kickoff for Kenan Judge's candidacy in Iowa House district 44. The past and probably future presidential candidate said nothing about his own record during his brief remarks. Later, he explained why he will devote much of 2018 to campaigning for other Democrats.

As a presidential candidate, O'Malley gave hundreds of stump speeches during dozens of Iowa visits before the 2016 caucuses. After ending that bid, he returned to Iowa several times to support Hillary Clinton, and since the 2016 election he has stumped for legislative candidates Monica Kurth and Jim Lykam. He endorsed State Senator Nate Bolton's campaign for governor last September. (Boulton had backed O'Malley before the 2016 caucuses.) The former governor's latest Iowa visit also includes policy-oriented discussions about water quality and climate change on the Grandview and Drake University campuses.

Supporting down-ballot candidates is not new; O'Malley headlined events for some Iowa Democrats during the 2014 cycle. But he is putting more resources behind such efforts in 2018. In addition, I was struck by how little he said about his own work during his appearance at Rookie's in Clive on February 12. For those who want to listen, here's the audio clip of former Lieutenant Governor Patty Judge, O'Malley, and House candidate Kenan Judge speaking to local Democrats. 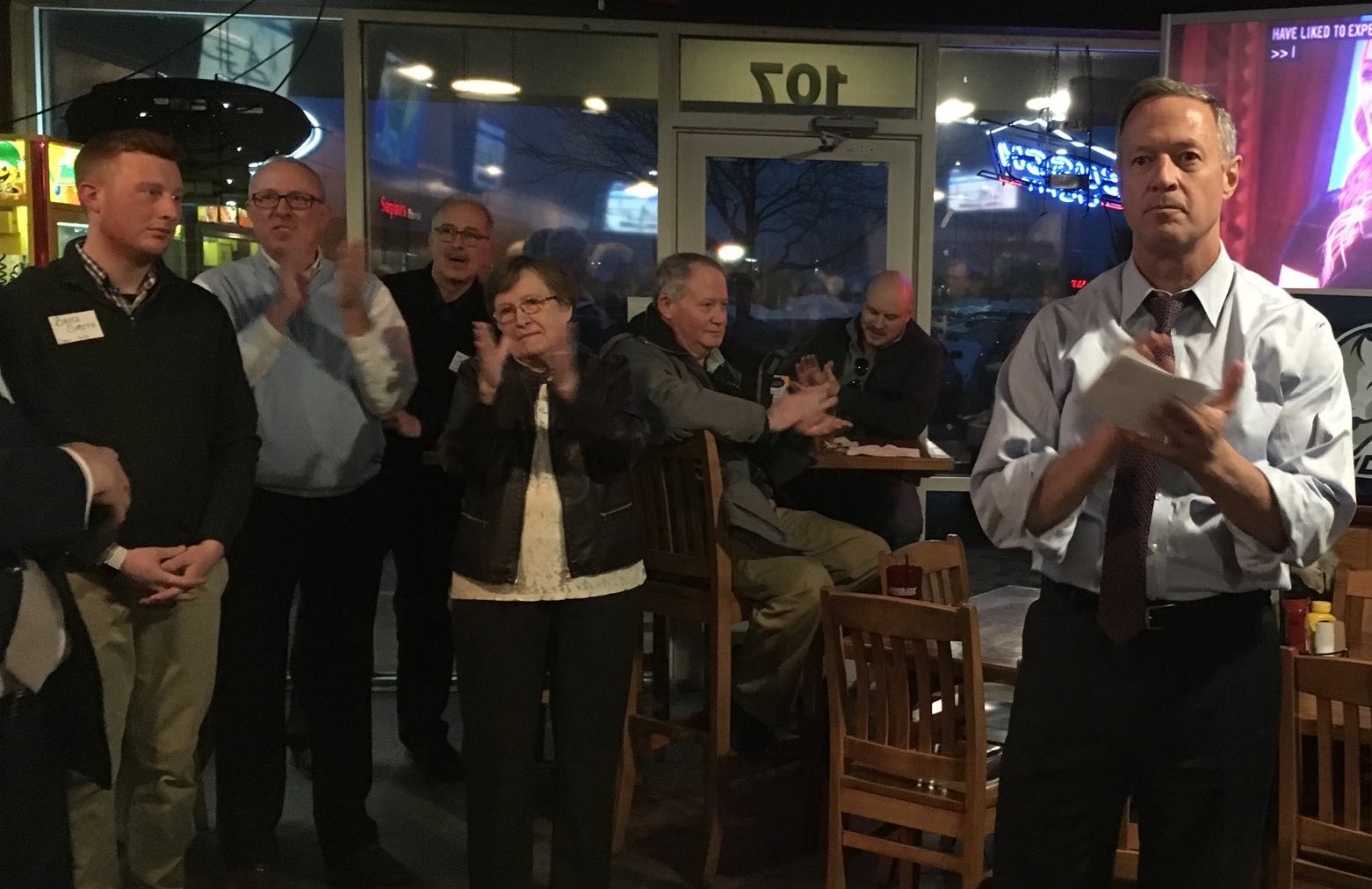 O'Malley joked that he has "frequent flyer miles" for Dallas County, having held an event in practically every bar there before the caucuses. He also acknowledged longtime friends and local Democratic leaders before getting to the heart of his short speech, starting around the 5:30 mark. My transcript:

So let's, very briefly--my wife Katie asked me, "Why do you keep going out there to campaign for people you've never met before?" And I said, "Because it makes me feel better!"

I mean, this is a guy who went all the way up the ranks of Hy-Vee. From being out there every day in Albia as a butcher. Worked his way up through the ranks, and then was in the corporate board rooms of Hy-Vee, but never lost track of the fact that our economy is not money. It's people. It's all of our people. And just as he had the opportunity to work hard and get ahead, he believes that every He has every kid in Iowa should have the opportunity to go to college. To work hard. To get ahead. To realize what it means to be, to be an American, really, right? That's the great anxiety out there.

You know, I've asked men and women--and by the way, we have been doing, our candidates, all across the country, usually about 15 points better on election day than anybody, including their own spouses, thought they were going to do. [laughter] So Kathi [Judge], keep that close to you.

There's been--I sense, and I've asked some of you this today too. Don't you sense that there's been a shift from last year in the public mood? I mean, these candidates tell me when they talk to people, they say, "I just want somebody that's going to listen to me. I'm looking for a good and decent person that I can vote for." And man, if we've learned nothing else over the course of this last year, we cannot take for granted that good and decent people choose to run for office. And when they do, we need to get behind them.

All of you that have come here tonight, that have cut checks for Kenan, I can't tell you how much that means to him, especially as a candidate just starting out. You are the fuel in his tank. You are what keep him going. So look, he has an outstanding shot at winning this seat for all of you, but only if you continue to help him. He's a person that believes that we're all in this together. We need each other, and we have to help each other if we're going to succeed. And that, my friends, is why I'm so psyched to be here with all of you, for the next state rep for Wake and Dallas County, Kenan Judge.

I asked O'Malley whether he has a timeline for deciding whether to run for president again. "No, not really," he told me. "I mean, I'm putting my energies into helping other people win back their own states. So that's where I'm directing my energies. So that's what I'm doing for 2018. We've repurposed our PAC, and it's called Win Back Your State, and I enjoy campaigning for others."

In addition for hitting the road for Democrats, O'Malley is "doing a little bit of writing, a little bit of teaching" this year and working with the MetroLab Network on a "Smart Cities" initiative. (He is a former mayor of Baltimore.)

O'Malley's Twitter feed is full of shout-outs to local or state-level candidates, often using his PAC's favorite hashtags #WinBackYourState and #BlueWave2018. In an interview with Iowa Starting Line's Pat Rynard, the governor elaborated on a possible second presidential campaign.

You know, there's probably not a day that goes by, watching what's unfolding in Washington, when I don't watch the news and think about how much differently our country could be governed now than she is. And you know, so I'm open to the notion of running for president again, but that's not what absorbs my energies and my direction right now.

The only thing I know for sure is that the next good thing for me to do is to help other people who are running right now, in these special elections. Because really, we have to win back our states if we're going to save the United States, if we're going to be able move our country forward. So that change begins this year, and so that's what I'm putting myself into. [...]

And I would hope that other people that might be considering, or open to the notion to their own candidacy [for president] will instead hit the pause button on that and put their shoulders into other people that are running this year.

That last comment sounds like a dig at fellow Maryland Democrat John Delaney, who has been running for president for months and started airing statewide television commercials in Iowa last week. Delaney has supported local Democratic organizations by speaking at fundraisers in Audubon, Woodbury, and Polk counties.

One thing the rivals agree on: Democrats need to communicate their own vision, rather than talking down the president. Delaney has told Iowa audiences, "we cannot win by just saying how bad he is. That’s not a formula for success." Similarly, O'Malley told Rynard that other Democrats have learned from their interactions with voters "never [to] talk about Donald Trump. All of these men and women tell me people are sick of him. They don't want to hear about it. And they certainly don't want to hear from a candidate running for state office, you know, what motivated them to run, or how outraged they are at the latest outrage coming out of the White House. That's not what they want to hear." Ordinary people want to hear "messages of solidarity" about making things better in their state or communities, O'Malley added.