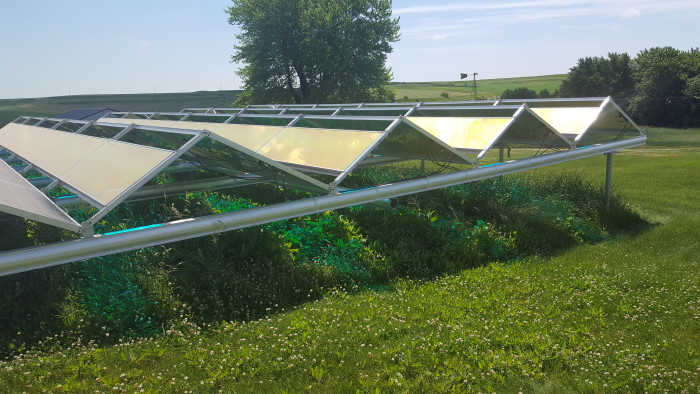 Ways and Means Committee Chair Randy Feenstra introduced Senate Study Bill 3197 on February 21 and scheduled a subcommittee meeting on the 130-page bill for 8:00 am the following morning. Sweeping changes to individual and corporate income tax rates could reduce state revenue by more than $1 billion annually, though the details are unclear, because no fiscal analysis is publicly available.

Although the bill would create a new legislative committee to "comprehensively review and evaluate each tax credit" (pages 31-2), it also calls for scaling back or eliminating some tax credits, with the solar incentive the first to go.

That popular tax credit can apply to residential or business photovoltaic systems. Kerri Johannsen of the Iowa Environmental Council noted in an e-mail message today that "many farmers and rural businesses" have benefited from the program. As of January 2018, the credit "has helped develop solar projects in all 99 of Iowa’s counties and leveraged $21.6M in state dollars into 3,395 solar projects and a total investment of $166,369,422." Furthermore,

The program is already capped at $5M per year and on a path to phase down along with the federal investment tax credit starting in 2019. This credit is not draining state funds, but supporting rural economic development and getting rid of the credit actually risks the loss of 700+ solar jobs across the state and many small, independent businesses.

The bill creates a committee to study tax credits. The solar credit easily holds its own in economic payback for the state. Let its merits be considered along with Iowa’s others credits as the legislature takes a look at all credits in the interim.

I enclose below a fact sheet with more details on the solar tax credit, along with language summarizing the other proposals in that section of the Senate GOP bill. Two geothermal tax credits would be repealed as of January 1, 2019. Another red flag for environmentalists is the call to reduce the historic preservation tax credit from $45 million to $35 million, starting next fiscal year, and repeal that tax credit in 2025. Historic preservation dollars have been essential for countless projects to renovate old buildings and revitalize main streets in Iowa communities of all sizes.

The Senate GOP bill would also reduce the "high quality jobs program," used to lure many large corporate projects over the years, to $80 million annually starting on July 1. It would repeal that tax credit as of July 2025. 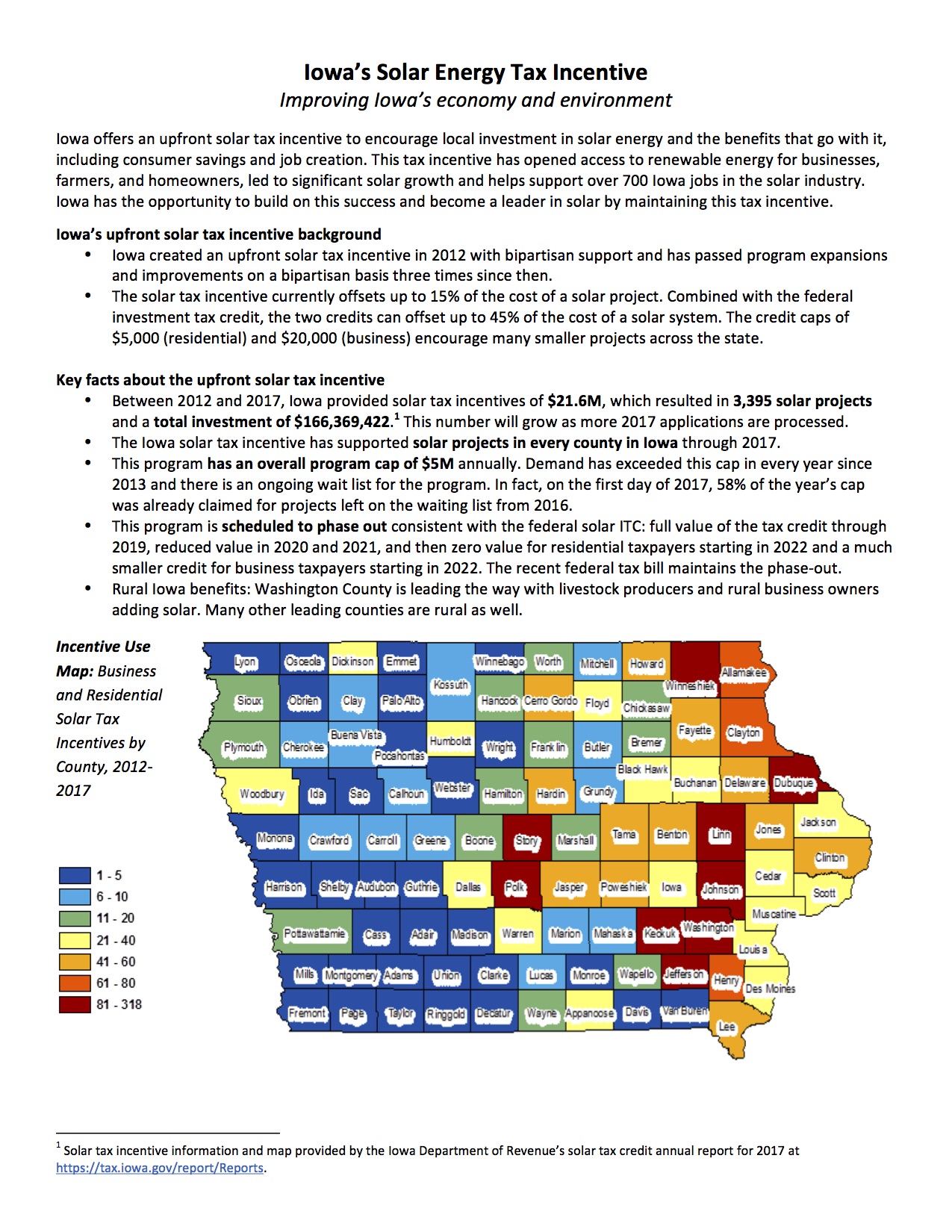 From the explanation section of Senate Study Bill 3197, as published on February 21:

S.F. _____
1 January 1, 2019. The bill repeals the refundability of the
2 supplemental research activities tax credit available under the
3 high quality jobs program beginning January 1, 2019. Finally,
4 the bill repeals the high quality jobs program effective July
5 1, 2025.
6 The bill increases, from 5 percent and 15 percent, to
7 7 percent and 17 percent, the two tax credit rates of the
8 agricultural asset transfer tax credit, beginning January 1,
9 2019. The bill also increases from $6 million to $8 million
10 the number of tax credits that may be issued per fiscal year
11 under the agricultural asset transfer tax credit program,
12 beginning July 1, 2018.
13 The bill repeals the accelerated career education program
14 provided under Code chapter 260G on July 1, 2025.
15 The bill extends by one year the deadline for entering into
16 withholding agreements under the targeted jobs withholding
17 credit pilot project from June 30, 2018, to June 30, 2019.
18 The bill reduces to $35 million from $45 million the number
19 of historic preservation tax credits that may be awarded each
20 fiscal year, beginning July 1, 2018, and repeals the historic
21 preservation tax credit program on July 1, 2025.
22 The bill modifies the research activities tax credits under
23 the individual and corporate income tax by providing that the
24 credits will only be available to businesses engaged in the
25 manufacturing, life sciences, software engineering, or aviation
26 and aerospace industry, and to the extent the business claims
27 and is allowed a research credit for such qualified research
28 expenses under the IRC for the same taxable year it is claiming
29 the state research activities credit. The bill includes
30 examples of persons ineligible for the tax credits. These
31 changes take effect upon enactment and apply retroactively to
32 January 1, 2018, for tax years beginning on or after that date
33 and for tax returns, including amended returns, filed on or
34 after that date for any tax year.
35 The bill further modifies the research activities tax
-113-
LSB 5452XC (3) 87
mm/jh 113/130

S.F. _____
1 credits under the individual and corporate income tax by
2 amending the definition of “base amount” for purposes of
3 calculating the credits. This change takes effect upon
4 enactment and applies retroactively to January 1, 2010, for tax
5 years beginning on or after that date.
6 Because Division II repeals the individual and corporate
7 alternative minimum taxes, the bill allows a taxpayer to
8 claim any remaining alternative minimum tax credit against
9 the individual’s or corporation’s regular tax liability for
10 the 2019 tax year, and the bill then repeals the alternative
11 minimum tax credit beginning in tax year 2020.
12 The bill increases the total amount of school tuition
13 organization tax credits that may be issued per tax year to $13
14 million from $12 million for tax years beginning on or after
15 January 1, 2019. The bill also increases the household income
16 limit at which a student is considered an “eligible student”
17 under the school tuition organization tax credit program to
18 four times the federal poverty amount for tuition grants
19 provided on or after January 1, 2019.
20 The bill repeals the tuition and textbook tax credit, the
21 volunteer fire fighter and volunteer emergency medical services
22 personnel member tax credit, and the reserve peace officer tax
23 credit, effective January 1, 2022.
24 The bill repeals the geothermal tax credit, the geothermal
25 heat pump tax credit, the farm to food donation tax credit, and
26 the ethanol promotion tax credit on January 1, 2019.
27 The bill repeals the solar energy system tax credits on July
28 1, 2018, for solar energy system installations occurring on or
29 after that date.
30 The bill requires the legislative tax expenditure committee
31 created in Code section 2.45 to study all tax credits available
32 under Iowa law during the 2018 interim, and to submit its
33 findings and recommendations to the general assembly for
34 consideration during the 2019 legislative session. As part
35 of the study, the legislative tax expenditure committee is
-114-
LSB 5452XC (3) 87
mm/jh 114/130

S.F. _____
1 required to consider new or different tax credit or other
2 incentive programs for economic development.