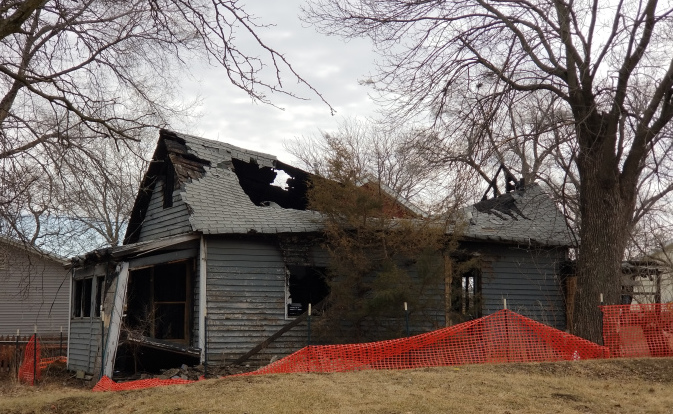 Tanya Keith makes her case for the local option sales tax on the Polk County ballot. Cross-posted from the Hat Trick Renovation blog. -promoted by desmoinesdem

When we first moved into River Bend, I owned a baby shop downtown called Simply for Giggles. We had only lived here a couple weeks when I realized I had to close my store because I wanted to spend more time with my family, and in my neighborhood. I feel so comfortable and happy in this place, it made me sad to go to work every day. I also realized that this neighborhood needed my skill set. I love to take risks, I have a degree in Interior Design, and I’ve done construction. There were so many houses in my neighborhood….heck…on my block, that needed a champion. Hat Trick Renovation is the continuation of that idea.

My work gives me a heightened awareness of the urban blight problem Des Moines means to address with the 1 percent sales tax vote on Measure A this Tuesday, March 6th. City Council member Josh Mandelbaum wrote a great breakdown of how I feel about the measure elsewhere on Bleeding Heartland. One of the biggest reasons I’m voting yes is I hate getting to the store and realizing I’ve left my 30-40 percent off coupon at home. I want roughly 1/3 of this money to come from outside the county.

But that’s getting ahead of myself. I’ve seen many people pose the question that we don’t need this money in the first place. We just need to belt tighten. This view is so out of sync with my daily worldview, I had to take people on a visual tour of what I see every day to show why I feel voting yes is the least regressive option. Des Moines’ urban core needs our help, and this sales tax is the lowest impact way to help those neighborhoods.

I decided to spend one hour photographing any house that was blighted (boarded up) or that I knew had been blighted since I moved to this neighborhood years ago. I took all these pictures within a half-mile of my house; I initially thought one mile, but I had more than enough material in the first half-mile. 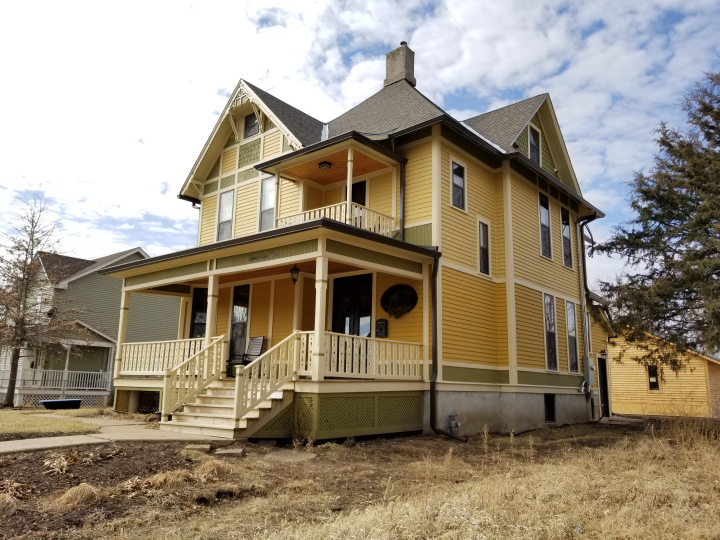 Twice restored, this gorgeous house was called “the Burn Victim” when we moved in. There had been a fire, and it was abandoned. There were several attempts to get the selling price low enough to save it. It was almost completely restored, when a fire started in some staining rags left in a bucket. Abandoned houses are a huge fire risk because people will break in and start fires that get out of control. I never want to get one of those 3 am calls again, so fighting urban blight is important to me. 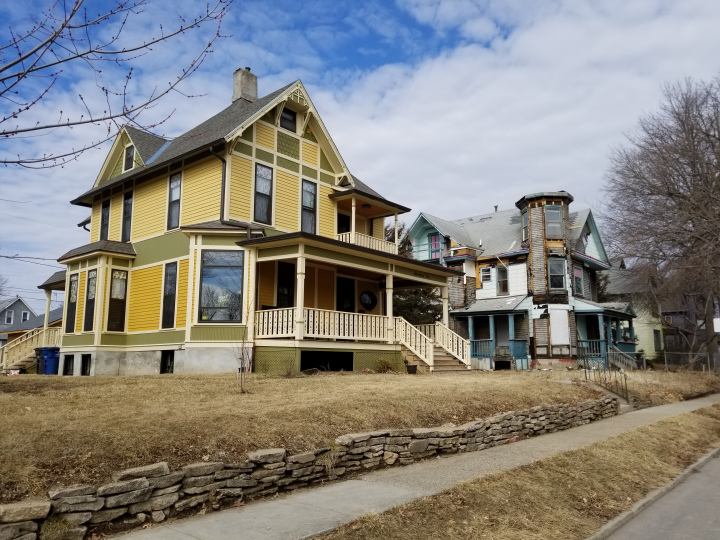 Before and After. The Twice Fire Survivor next to our latest project, The Sister House. Here’s a better photo: 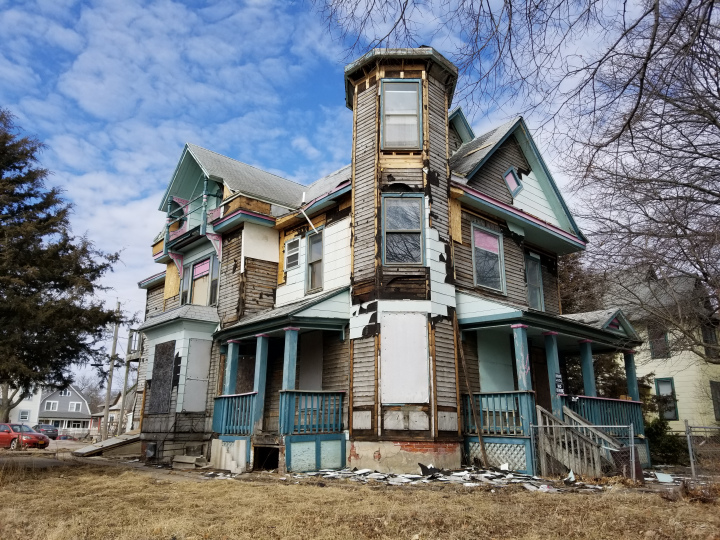 Oh, the hours I’ve spent thinking about this house on my block. One city employee told me they were sure if would cave in before the tens of thousands of bad debt were cleared from it. There isn’t enough money in the city budget to free these Victorian queens from the tax, water, and other bad debt. Restoring historic homes is a huge financial risk. You don’t know the final bill until you start tearing into walls and assessing damage from years of neglect. If you have to start by clearing $50,000 in debt, it just isn’t feasible, even with historic preservation tax credits. But this house was one of the lucky few that can get saved in the current budget, and hopefully in a few years, it will look more like the golden yellow house next door with another family living on our street. 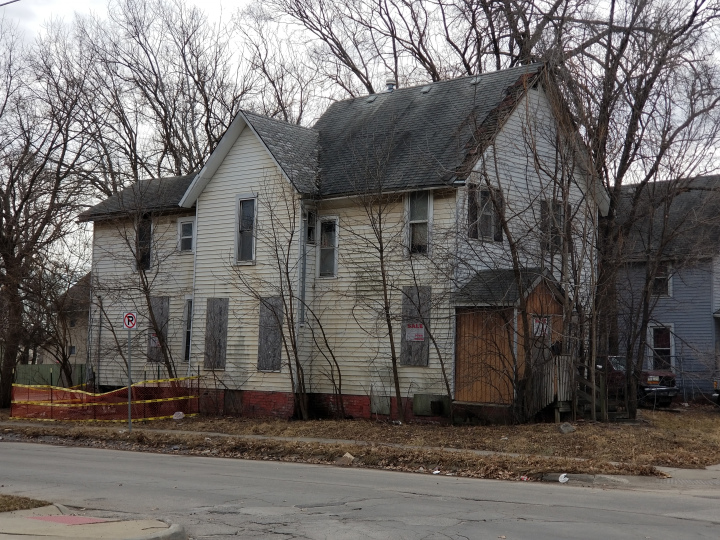 Not every house is so lucky. I’ve looked at this one many times, and considered fixing it, but now I fear it is too far gone. That yellow caution tape marks a caved in basement. 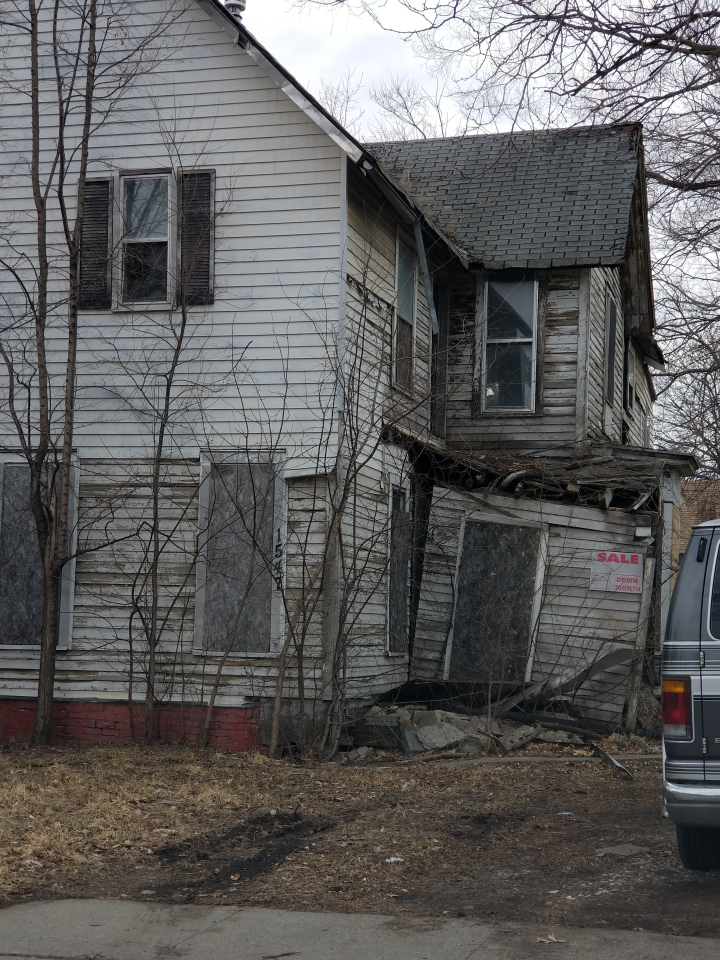 And here is the other side, also falling off its foundation. I consider myself the patron saint of lost causes, but this is likely too far for even me. If Des Moines had better funding for dealing with blight, we could have saved this. 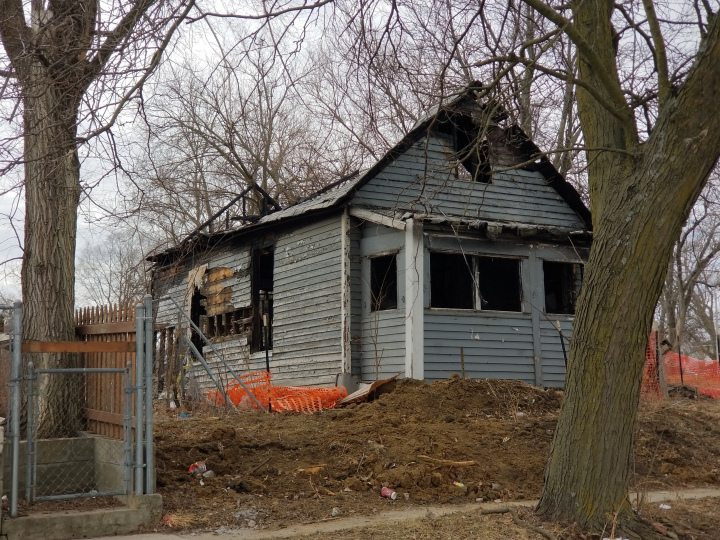 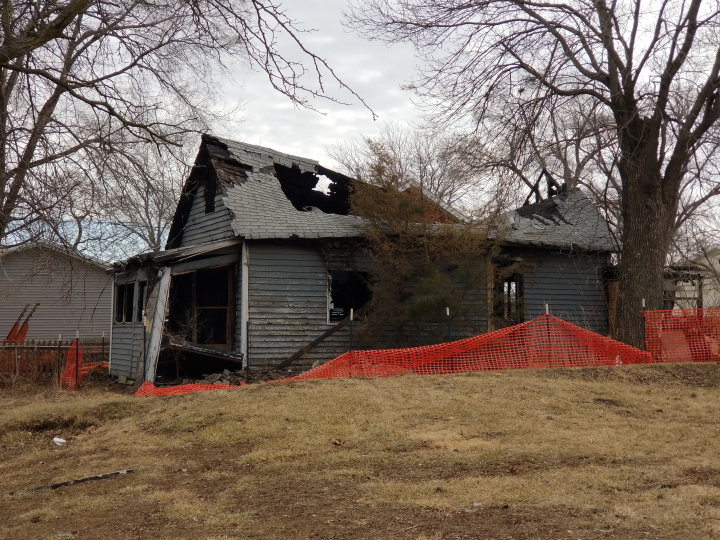 This one burned. That orange fence isn’t keeping anyone out. It’s dangerous and unhealthy. 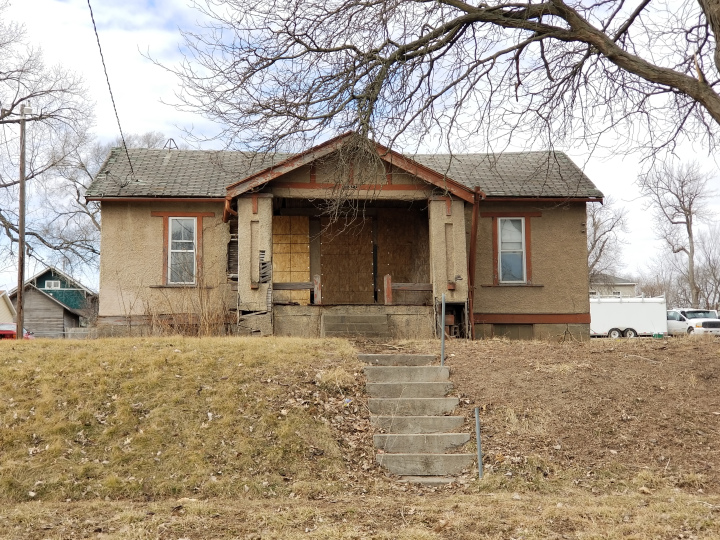 It’s boarded up, but this could be a really cute, affordable house for someone. 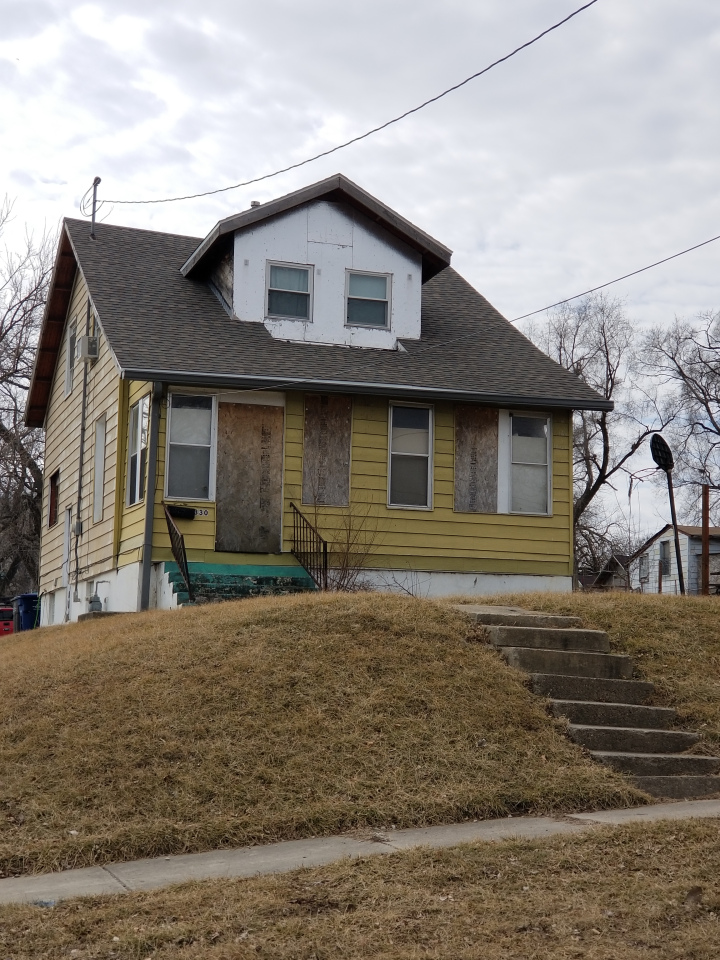 So many boarded up houses. 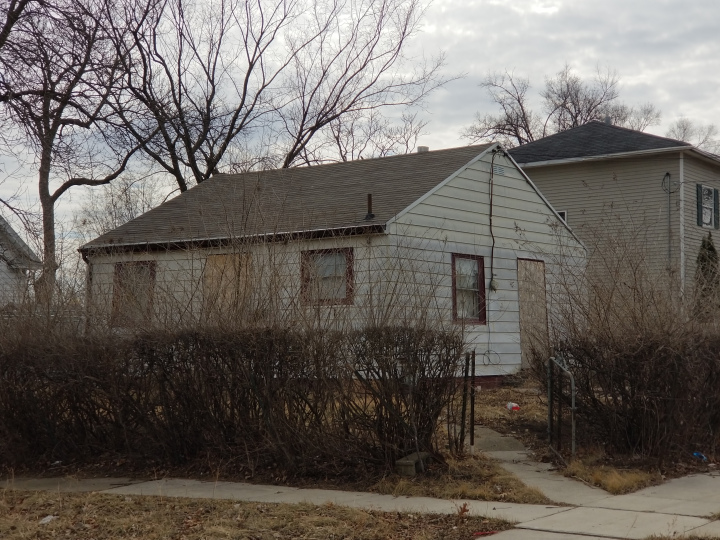 We talk about the lack of affordable housing, when it’s sitting right here in front of us, boarded up and needing funding. 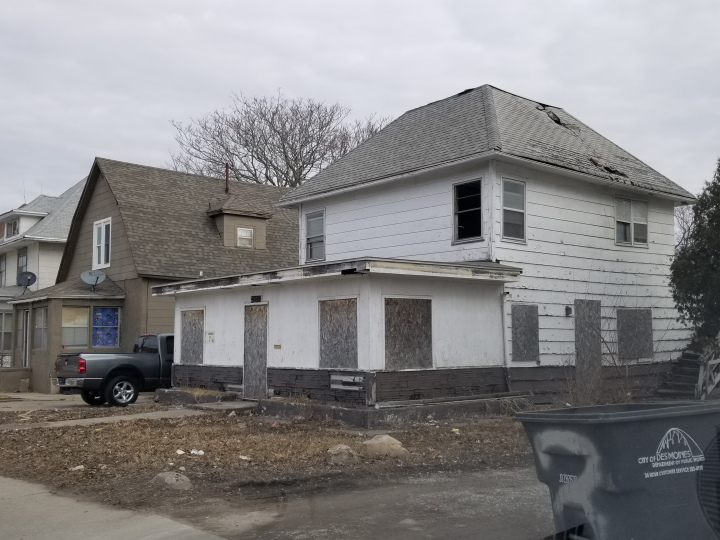 This is another one I fear is too far gone. When houses sit waiting for funding, there can be roof damage, or urban mining that strips the house of plumbing and electrical, and architectural detail. All those things add dollars. It saves money to get houses out of blight situations faster. 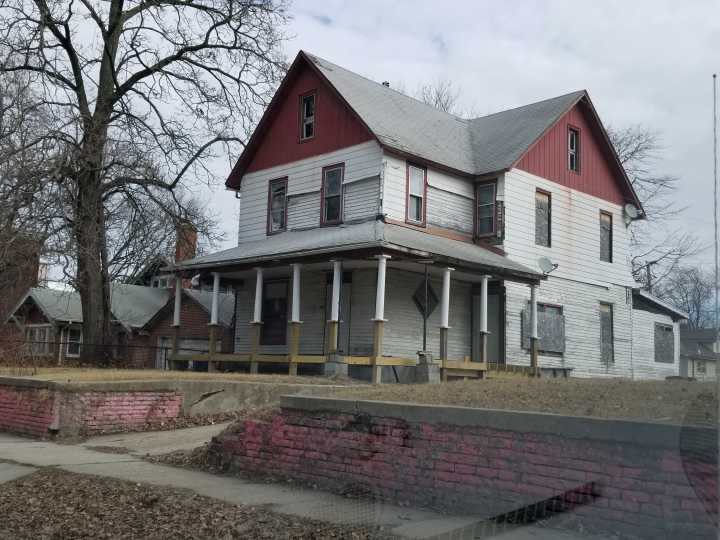 This house has someone chipping away at projects. Hopefully, it’s one the mend. 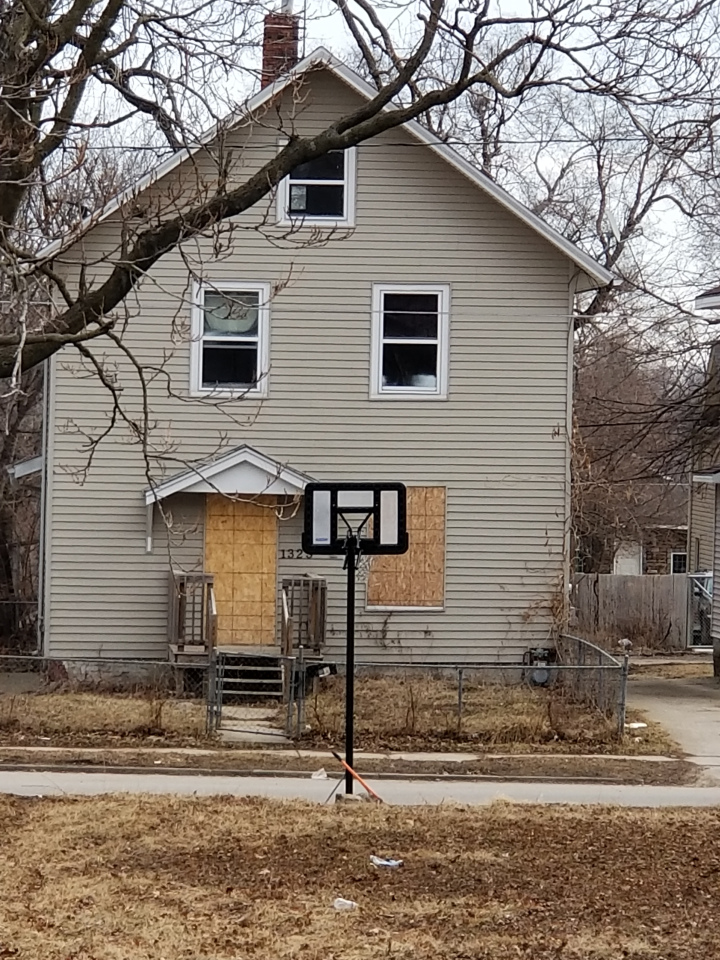 This is where I started to get depressed. This is ALL within a half mile of my house. These are just the boarded up houses. Not the sketchy rentals that need more housing inspectors than the current budget allows. There is so much potential here if we make the investment. 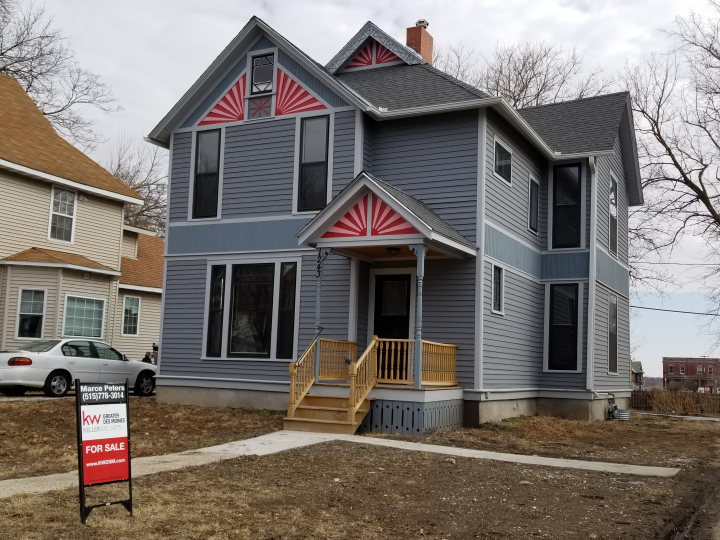 I had to cheer myself up. This is one of the wins. A house that got processed through tax sale, got a new foundation, and is now fully restored, waiting for a new family to move in. 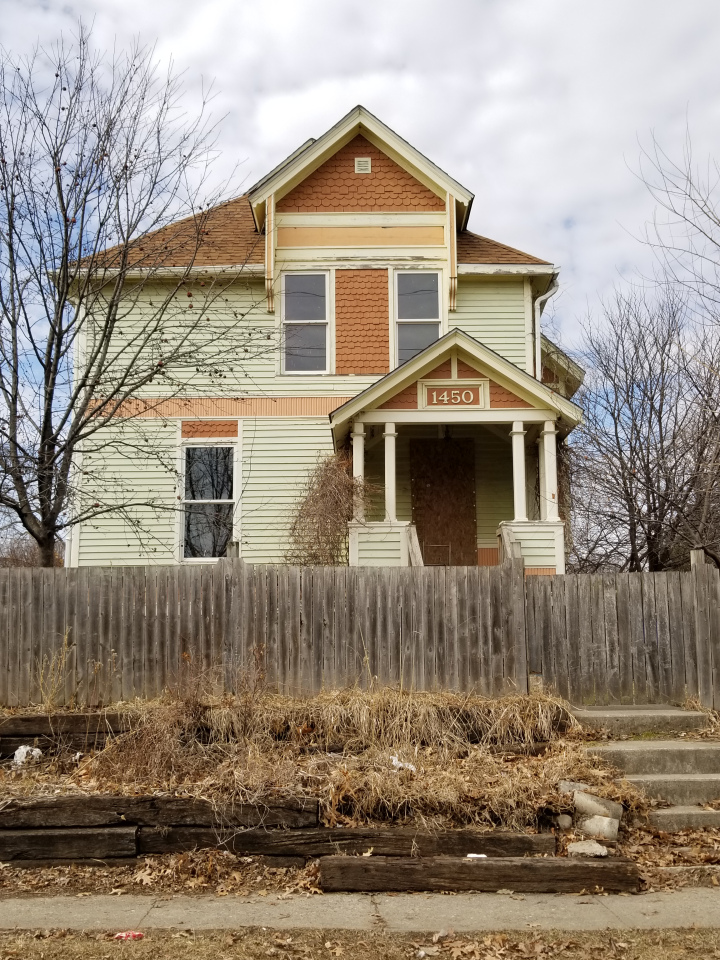 Across from my carpool drop. Every school day, I think about this house. 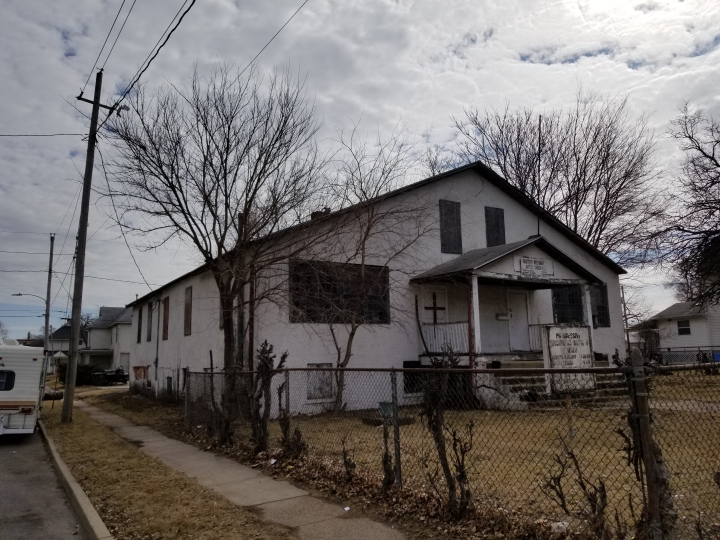 I dream about making this into a community center where we could have a workshop to help neighbors fix up their houses. So many dreams, so little funding. 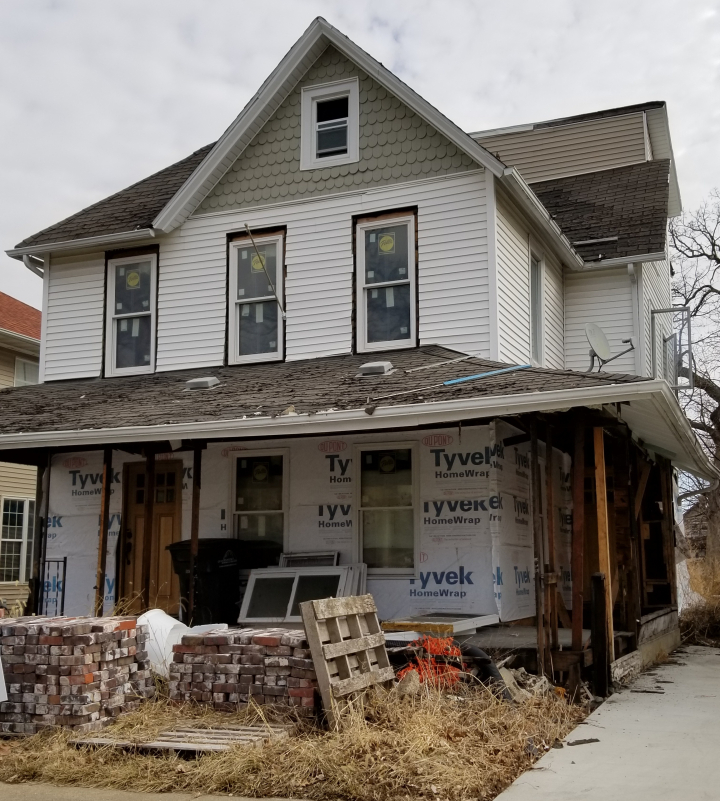 When I moved here, the neighborhood owned this house and got it turned over to a rehabber who has been working on it ever since. It’s slow, but there’s progress, but it only moves forward with a kickstart from the city or county. 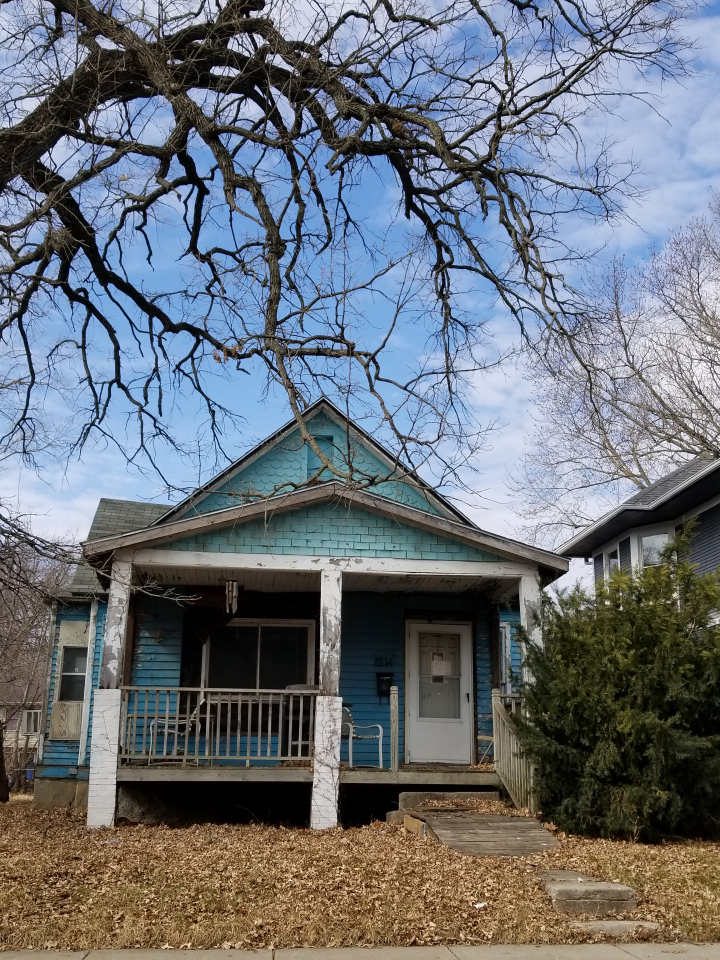 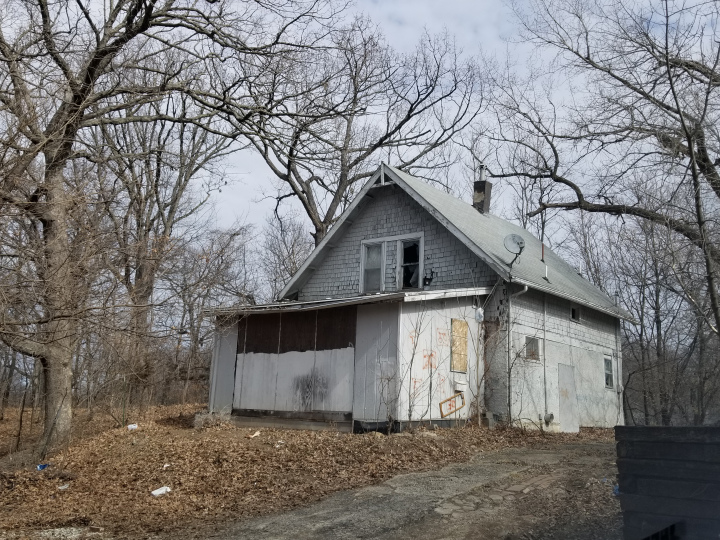 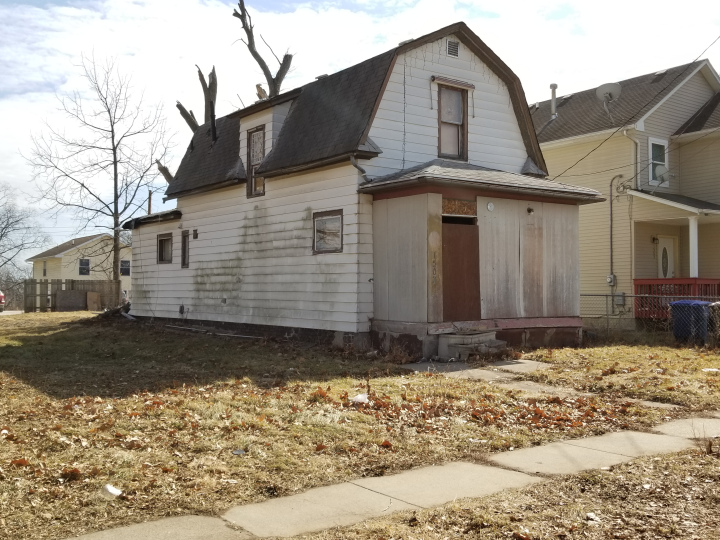 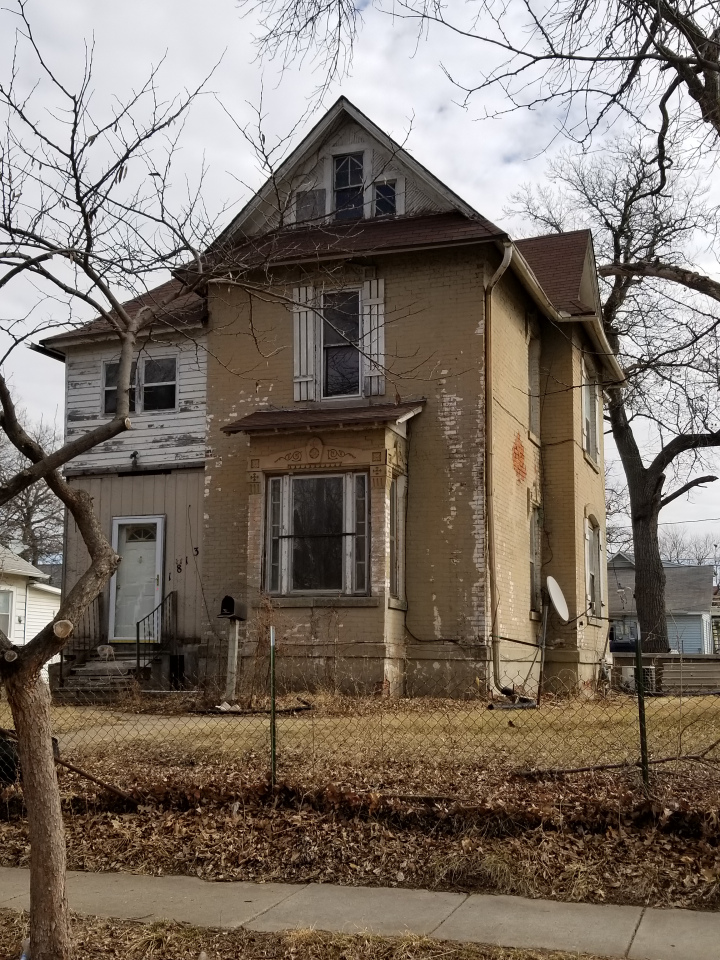 Houses. This one went to a tax sale and we have started renovating it this winter. 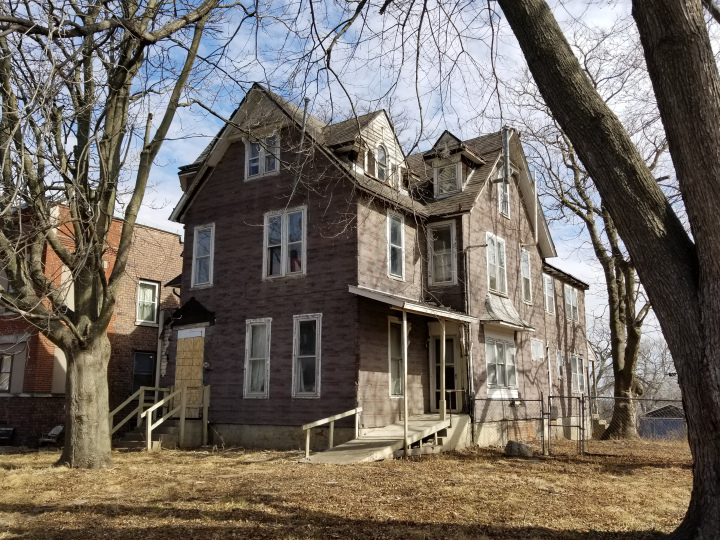 Why are the big ones so alluring to me? 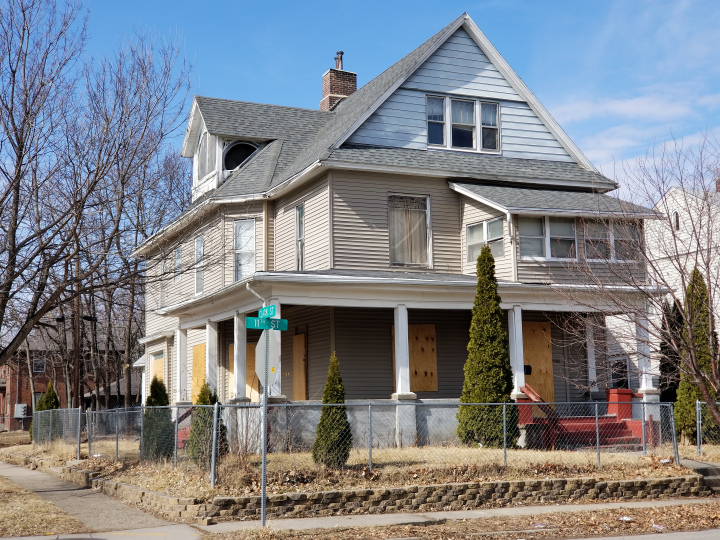 This one has the most gorgeous roofline detail. I won’t be able to stand it if this one decays before the city can save it. I can’t think about it. Let’s do two big wins: 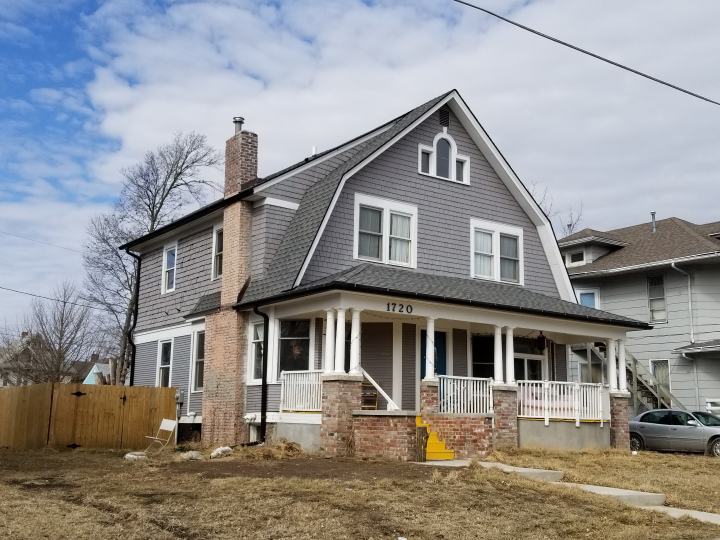 The city turned this to the neighborhood when we first moved in. Doing volunteer tear out of this one is the beginning of how we become house rehabbers. Now it has a family with kids living there. It makes me so happy. 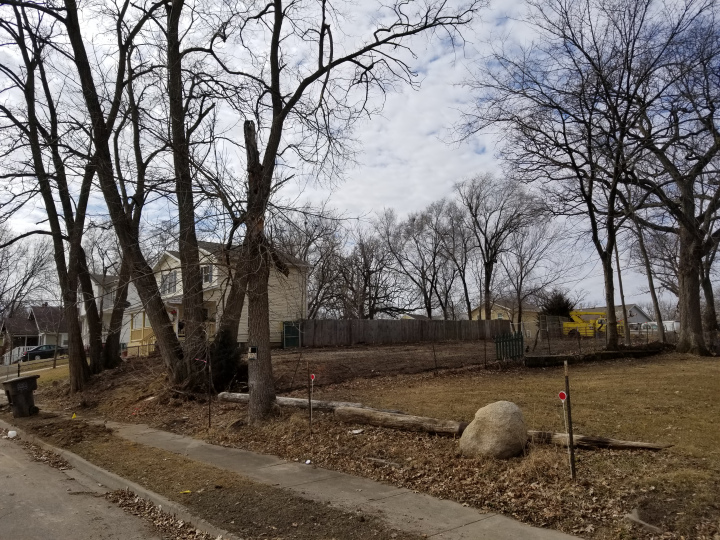 How is a vacant lot a win? Before Tuesday, this was a house that was in the worst shape. Here’s a photo I took to torture my husband: 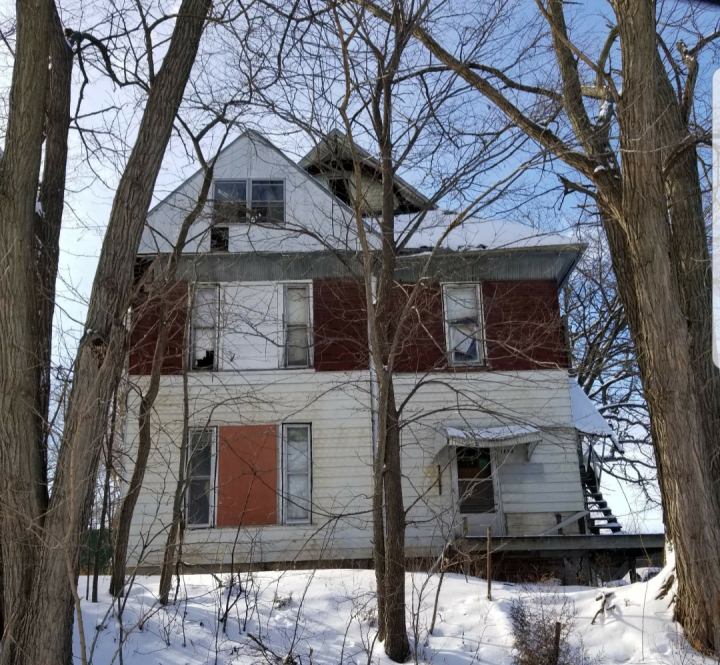 What you can’t see in this photo is the entire side roof caved in. I did fantasize about stealing that wood trim off this one, but look again at the open lot. I didn’t know this had been torn down when I went looking for it this morning. That lot felt like a breath of fresh air. I literally felt relieved. No more worrying about kids getting in trouble, or fires, or further cave in. Just a quiet, open lot. That’s a power of funding dealing with blight. Instead of sketchy boarded up, caving in houses, you get lots ready to build upon or houses in an affordable neighborhood ready to be fixed up.

There’s more (so many more, even just within the half mile circle) but you get the idea, right? There are so many more houses in blight than funding to deal with them. We need Measure A to pass. Vote YES on the sales tax to fight blight and all the other improvements we so desperately need.