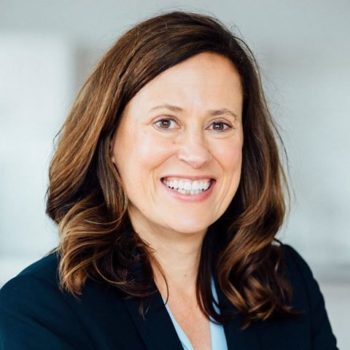 The Iowa Democratic Party's Third District Central Committee will meet on March 26 to consider whether to nominate Theresa Greenfield for the Congressional primary. But it's far from a sure thing that committee members will vote to nominate Greenfield, or that such an action could withstand a legal challenge.

Greenfield's campaign fell short of the required number of signatures to qualify for the Democratic primary ballot after scrambling to collect a new set of petitions on the last day of the filing period. However, the Greenfield campaign is pressing for another path to get on the ballot, through an obscure Iowa Code provision stating,

Attorney General Tom Miller confirmed on March 19 that his office and the Secretary of State's office were examining whether this provision applies to Greenfield's predicament. IA-03 Democratic Central Committee chair Bill Brauch told me the same day he had scheduled a meeting for March 26 to consider Greenfield's request, adding,

However, the meeting is contingent upon her first receiving an opinion from the AG and Secretary of State to the effect that she would be eligible under the circumstances to be designated via that process. She has agreed to that condition. The key issue for the Central Committee is concern about any potential legal expenses. The District Central Committee does not have deep pockets and has little funding for legal fees in the event someone should challenge any action we might take under the section.

Our office will not be issuing a formal opinion regarding the application of sec. 43.23. The reasons for this are twofold: first, the office would decline to issue an opinion on any subject while there is a live controversy pending. Second, the Iowa Code provides a process for resolving challenges to the sufficiency of a nomination to the ballot in sec. 43.24. The Attorney General, Secretary of State, and State Auditor are designated to hear and resolve such challenges. Because the Greenfield matter could potentially come under review by the Attorney General, Secretary of State, and Auditor, it would be inappropriate to issue an opinion that pre-judges an issue that could be raised in that proceeding.

Was there a path forward for Greenfield with no green light from Miller? Brauch told me on March 20, "In the absence of an AG opinion it is unclear whether the meeting will go forward. That question will be decided by the Third District CC Executive Committee. I plan to call a meeting of that group for sometime tomorrow. (EC includes our officers and our 8 State Central Committee members)."

Democrats who received an e-mail blast from Greenfield's campaign that evening got a very different impression. Here's the text under the subject heading, "Great news (and Monday's critical meeting)." The bold passage was emphasized in the original:

The Iowa Secretary of State has confirmed that the 3rd District Democrats can put me on the ballot -- and give the voters a full choice in our upcoming primary.

The 3rd District Democrats have scheduled a special meeting on Monday to make their decision. They have an opportunity to follow the lead of all those who came out on Friday, stood up for fairness, and chipped in their time and considerable energy to help put me on the ballot.

Team Democracy is on a roll. We're keeping up the fight – and we're not stopping until we get America back on track!

A tweet from Greenfield provided a similar view of the matter as almost a done deal: 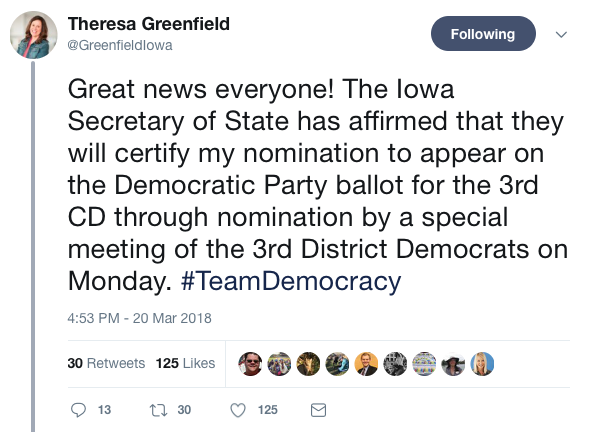 When I asked on March 20 whether the sentence in bold was an accurate reflection of Secretary of State Paul Pate's position, I soon received a one-word reply from communications director Kevin Hall: "No." He did not respond to further requests to clarify Pate's stance on the matter. 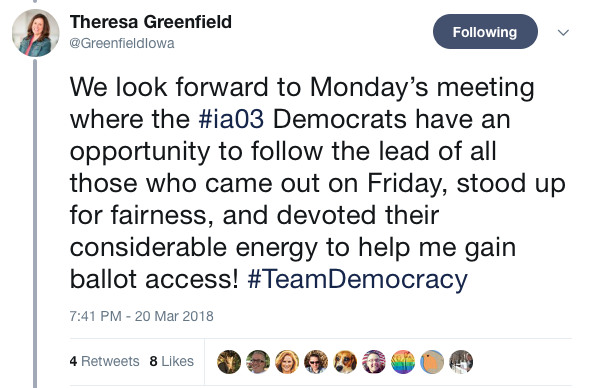 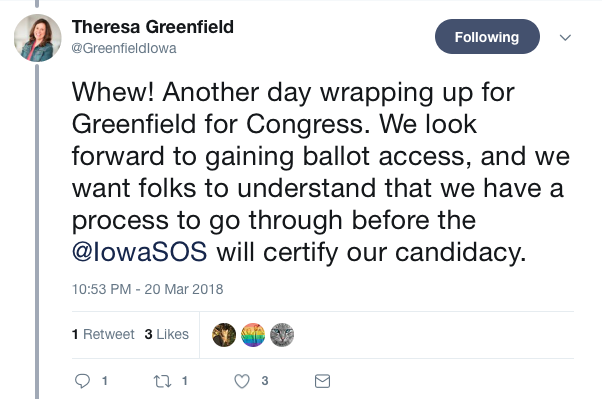 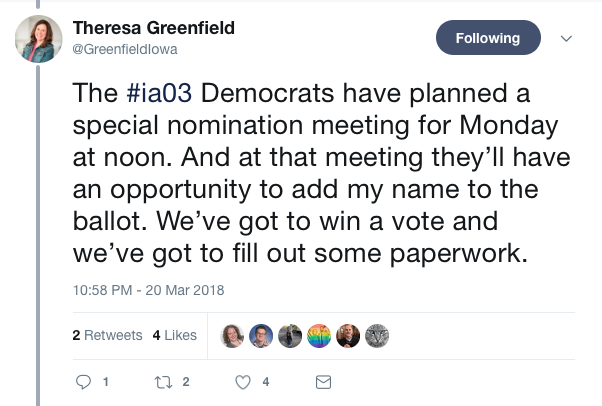 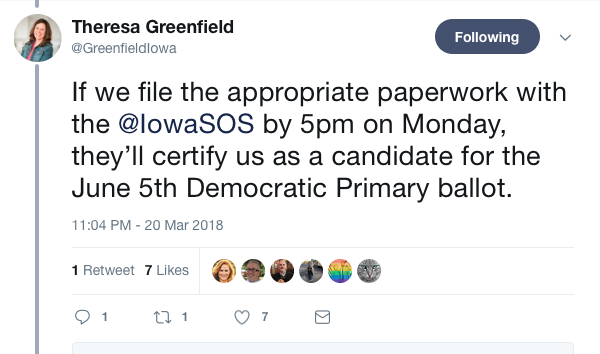 Throughout the day on March 21, I was unable to confirm that Pate would certify Greenfield's candidacy, assuming the IA-03 Democratic Central Committee voted on March 26 to nominate her. Late in the afternoon, Pate released a statement clarifying his position.

My staff and I have been notified by the Attorney General's office that they will not be issuing a formal opinion regarding the application of Iowa Code section 43.23. This office will continue to analyze and research this matter in a careful and through [sic] manner, but at this time, I will also be reserving judgment on the applicability of Iowa Code section 43.23.

If the Third District Democratic Party makes the decision to hold a convention and nominates an additional candidate for the June 5 primary election, we would receive the convention certificate and affidavit of candidacy from the chosen candidate. The role of the Secretary of State's office in this process is to take receipt of a convention certificate, which does not mean that the selected candidate's placement on the ballot is guaranteed or above legal challenge.

This evening, IA-03 executive committee members voted to hold the March 26 meeting. Brauch emphasized in an e-mail to central committee members, "The fact that we are going ahead with Monday's meeting should not be interpreted to mean anything other than we wished for the full Central Committee to be able to participate in the decisions we have before us."

Brauch does not believe Iowa Code 43.23 applies to the current circumstance, he explained in an earlier message to committee members. Excerpts:

As you know, I am a lawyer with near 31 years experience writing, interpreting, and enforcing Iowa law. Like any other lawyers in our Central Committee, I have no special expertise in election law. But I can read a statute. [...] I shared the following views with Ms. Greenfield this morning.

At the bottom of this e-mail is the full text of section 43.23. The language upon which she is relying is subsection 1. For that subsection to apply, (in other words, its "trigger") the party must be facing a situation where a person who has filed nomination papers with the Secretary of State has either passed away or has withdrawn as a candidate. [...] It is my view that Ms. Greenfield does not qualify under either of those triggers.

Second, in my view she clearly has not withdrawn as a candidate. She continues to promote her campaign and to attempt to raise funds. She is soliciting members of this Committee to vote to place her name on the ballot. She is not proceeding as a "withdrawn" candidate. Chapter 43 does not define "withdraw" and, therefore, I read the term to have its broadest meaning, particularly in light of the purpose of this statute, which is very clear to me. The purpose is to enable political parties to fill ballot vacancies when a primary candidate passes away or otherwise decides not to run. That's not the case in this situation. Ms. Greenwood [sic] has never acted in the manner of a candidate who has withdrawn and is not doing so today.

If one could somehow read the statue [sic] to be triggered (and, as noted I don't think that is a reasonable interpretation of he law), there is a third test. That is whether the language, "may designate one additional primary election candidate for the nomination that person was seeking..." The reference to "that person" means the candidate who died or pulled out of the race. It speaks in the past tense "was seeking." It does not contemplate that person being the same person who will be placed on the ballot by the Central Committee via this process, as would be the case if we were to vote to place Ms Greenfield on the ballot.

If I thought this was a close call, I would tell you that. I do not think this is a close call. I will be voting on Monday that the statute has not been triggered and that the Central Committee lacks authority to move forward to a second vote as to whether we should place someone's name on the ballot [...].

Gary Dickey, who is an expert on Iowa election law, reached the same conclusion that Iowa Code 43.23 does not apply. He also does not consider the matter "a close question."

(Des Moines, IA) Today, Democratic Congressional Candidate Cindy Axne released a statement to the members of the 3rd District Democratic Central Committee regarding the extraordinary measures the Theresa Greenfield campaign is asking them to take in order to put her on to the ballot.

Cindy Axne said, “Every single day on the campaign trail, I promise Iowa voters that I will never stop fighting when it comes to doing the right thing. It’s what I’ve done throughout my life, and as a candidate for US Congress, that includes my responsibility to ensure we protect our election process and hold those running for office accountable. Anyone running for office should uphold the law, not seek to twist it in their favor.

Theresa Greenfield's circumstance is unfortunate, but the buck stops with the candidate. Despite multiple attempts, she has not qualified for the ballot. I am truly sorry for the position in which she finds herself, but we cannot ignore the integrity of our election process. Legal opinions support the fact that the statute Ms. Greenfield is trying to use simply does not apply in this case.

Despite the great personal tragedy of my mom unexpectedly passing away in the middle of petition gathering, I met and exceeded the obligations and earned my place on the ballot. I didn't shrink from my responsibilities, and neither did my fellow candidates Eddie Mauro and Pete D'Alessandro; each of us, and our campaigns, played by the rules and did the hard work required of us.

What is most important is that we - 3rd District Democrats - are in a position to defeat David Young in November and put this seat back in Democratic hands so working families once again have a voice in Washington. This continued turmoil and request for extraordinary measures unsupported by the law are giving Republicans the opportunity to discredit Democrats by invoking backroom deals and ballot fraud. These accusations are harmful to the party and unfair to whoever our eventual nominee is. Rest assured, if the committee yields to Ms. Greenfield’s request, we will be hearing about this well into the fall. I fear this could help hand Republicans the election.

I am not afraid to stand up to the powerful and be a voice for common sense, even when it’s uncomfortable - as it is now. It’s how I’ve lived my life and it’s why I’m running for Congress. And I urge our 3rd District Central Committee Members to join me in doing what's right and uphold the law by voting down this request."

Axne probably benefits most from a three-way Democratic race that does not include Greenfield. That said, I agree that this section of Iowa law was not intended for this situation.