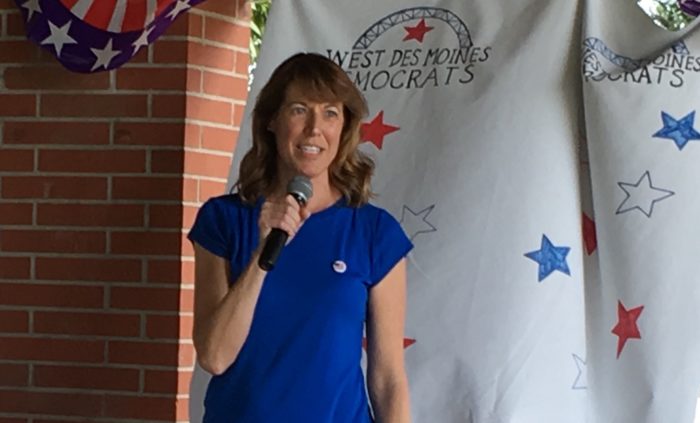 Catching up on this week's news from the third Congressional district, former candidate Austin Frerick is now supporting Cindy Axne, one of three remaining Democratic contenders. In a statement enclosed in full below, Frerick described Axne as "the hardest working candidate" in the once-crowded field, having held more than 80 meetings with voters in communities large and small. "Cindy is hands down the best person to beat David Young in November. I ask my supporters to fight as hard for Cindy as they did for me," Frerick added.

Frerick ended his campaign just before last month's filing deadline, saying he did not have the financial resources to compete for the nomination. He gained respect among supporters of all candidates for highlighting problems rarely discussed on any campaign trail, such as economic concentration and the Iowa Farm Bureau's conflicts of interest.

I would guess that many local activists expected Frerick to endorse Pete D'Alessandro. Anecdotally, a lot of "Bernie Democrats" were having trouble deciding between those two candidates. U.S. Representative Ro Khanna, a vice chair of the House Progressive Caucus, was an early Frerick supporter and endorsed D'Alessandro soon after Frerick was out.

Also this week, Axne landed the endorsement of EMILY's List (full statement below). The group promoting pro-choice, Democratic women has a huge national mailing list and can help candidates raise substantial funds from donors who might not otherwise be familiar with their campaigns. EMILY's List came out for Abby Finkenauer in Iowa's first Congressional district last year and for secretary of state candidate Deidre DeJear last month. Understandably, the PAC was keeping its powder dry in IA-03, where until recently, two strong pro-choice women were running. With Theresa Greenfield not qualifying for the ballot, Axne's only remaining Democratic competitors are D'Alessandro and Eddie Mauro.

Any comments on the IA-03 race are welcome in this thread. Click here to read each candidate's case for being able to beat Representative David Young and here for a list of high-profile endorsers.

(Des Moines, IA) Today, Democrat and former Congressional candidate Austin Frerick endorsed Democrat Cindy Axne in Iowa’s 3rd District Primary. Austin made it clear that he believes Cindy has the experience and knowledge to hit the ground running in Washington. Austin noted that Cindy’s experience in State Government, community activism, and small business experience makes her the best fit to go up against Congressman David Young in November.

Austin said "Cindy has been the hardest working candidate in the Third District primary. Throughout the campaign, she and her staff have worked tirelessly to fight for Iowans across the district from rural communities to neighborhoods in Des Moines holding more than 80 meet-and-greets. Cindy is hands down the best person to beat David Young in November. I ask my supporters to fight as hard for Cindy as they did for me."

After receiving Austin Frerick’s endorsement Cindy said “Over the last six months on the campaign trail I’ve had the opportunity to travel the district attending events and getting to know Austin. I’m proud to receive Austin’s endorsement and support. Austin has been a leading voice in protecting our rural communities and denouncing corporate concentration, I will work everyday on the campaign trail to continue his message.”

Cindy Axne is a fifth-generation Iowan, a small business owner, parent and community activist. She grew up in a tight-knit family on the south side of Des Moines with weekends and summers spent on her maternal grandparents’ farm in Warren County, 4-H activities, and playing 6-on-6 basketball for the Valley High Tigers. Her parents raised Cindy and her sisters to speak their minds and not be afraid to take on tough fights – even when it was uncomfortable. That is the principle that has defined Cindy’s adult life – from working to keep state government accountable to the people it serves, to advocating for all-day kindergarten for every child in West Des Moines, and fighting to fix our broken health care system.

“Cindy Axne is a small business owner and community activist whose deep Des Moines roots have prepared her to stand up for working families in Congress. Cindy served the state of Iowa for nearly a decade, holding state lawmakers accountable to the people they serve. Her personal experience as a small business owner who was unable to afford comprehensive health insurance has led to her dedication to protect and expand all Iowans’ access to high-quality, affordable health care. As a working mom, she successfully fought to make full-day kindergarten available for every child in West Des Moines. I have no doubt Cindy will continue to fight for families in our nation’s capital.

“David Young is clearly part of the problem in Washington. His priorities are simply not aligned with the working folks who need a champion in Congress. The people of the 3rd District have a far better choice come November. Cindy will fight to defend hardworking Iowans’ economic security and the rights of the most vulnerable among us. EMILY’s List looks forward to helping elect this champion for Iowa working families.”

A fifth-generation Iowan, Cindy Axne grew up on the south side of Des Moines and worked for the state government across a variety of departments for nearly a decade, helping hold over twenty different state agencies accountable to taxpayers. In addition to co-running a digital design and consulting firm with her husband, Cindy currently serves as a mentor with the John Pappajohn Entrepreneurial Center at the University of Iowa, her alma mater. She lives in West Des Moines with her husband and two teenage sons, and is an active member of her church.

UPDATE: Former Iowa Senate Majority Leader Mike Gronstal, the best-known Democrat in the Council Bluffs area, endorsed Axne on April 9. About two-thirds of the 158,036 active registered Democrats in IA-03 live in Polk County, containing Des Moines and most of its suburbs. Pottawattamie County (including Council Bluffs and Carter Lake)contains the second-largest number of registered Democrats in the district (14,884).

Gronstal said “While I admire all the candidates in the Democratic Primary, I believe Cindy Axne is the best candidate to go up against Congressman David Young in the fall. Cindy has a proven track record of holding Government accountable, with over ten years experience in State Government, Cindy helped save taxpayers millions of dollars while helping to put people back to work. Along with her professional experience, Cindy’s community activism shows us where her priorities are, by helping to pass All-day Kindergarten in West Des Moines to helping stop construction of an unnecessary road through Walnut Woods State Park. That’s why I’m proud to endorse Cindy Axne for Congress."

After receiving the endorsement Cindy said “I’m proud to have received former Senate Majority Leader Mike Gronstal’s and his wife Connie’s endorsements today. Senator Gronstal served our state for over 30 years, as one of Democrats’ strongest advocates in protecting our environment, our LGBT community, women’s rights, and helping to bring jobs here to Iowa. I look forward to working with Senator Gronstal over these next several months and carrying our District’s priorities to Washington.”