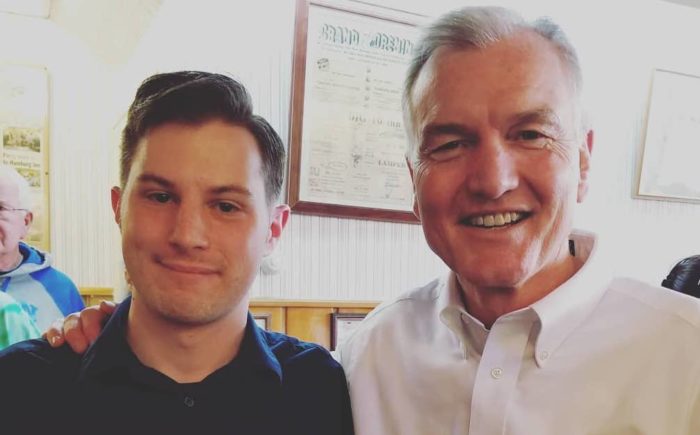 John Norris in a league of his own

James Pierce is a Democratic volunteer in Iowa City and a junior at the University of Iowa. Bleeding Heartland welcomes guest posts advocating for Democrats in competitive primaries. -promoted by desmoinesdem

Not long ago, I thought this primary might be the first time that I would walk into the voting booth undecided. A lot of candidates I like are running for governor, all of whom bring different qualities and ideas to the table.

As I observed the primary however, it become increasingly clear that only one candidate had everything I was looking for. As a proud progressive Democrat, I want a governor who exemplifies those values. That every human life is equal in value. Every Iowan matters and deserves to have their government work for them. That every Iowan deserves a seat at the table and an opportunity to thrive and succeed.

Finally, I want a governor who can actually take their platform and accomplish it once in office. Someone who knows how to run the governor’s office and how to work with the state legislature in order to enact real progressive change that makes people’s lives better.

For me, the only candidate who satisfies all of those requirements is John Norris.

John Norris not only has all the qualities I’ve already listed, but he has something else as well. Heart. At his core, he cares about the people of this state and has spent his life devoted to that purpose. He believes in fairness and equality. He offers to help his own opponents get on the ballot, because he recognizes that at the end of the day, we’re all in the same party and we all benefit from a fair, open and competitive primary.

John is also the candidate who, in my opinion, has the deepest knowledge of all the issues that affect our state. Too often politicians have knowledge that is a mile wide, but an inch deep. John Norris, on the other hand, is perhaps the most knowledgeable candidate I’ve ever seen. He knows Iowa and its government like the back of his hand. In addition, John exemplifies the time tested progressive values that can win everywhere. That, in the words of the late Paul Wellstone, “We all do better when we all do better.” I believe that is the spirit and the values that Democrats should take into this election.

After a long period of being undecided, I've come to the conclusion that out of a crowded field of good candidates, John Norris is in a league of his own. He has the heart, the compassion, the experience, and the know-how to win in November. Once in office, those same qualities allow him to pursue and accomplish a progressive agenda, and make Iowa a place where everyone can thrive and succeed. That’s why I’ll be supporting John Norris for governor in the June 5 primary.