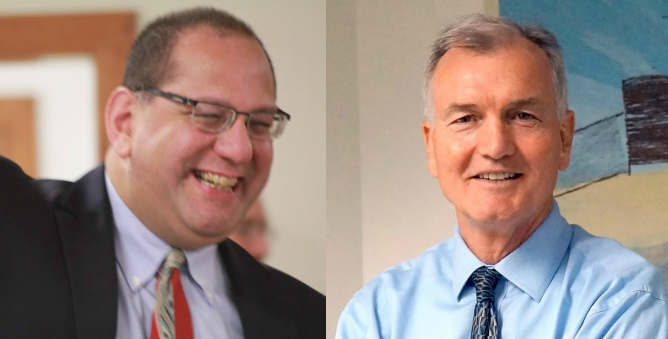 Jon Neiderbach will not file nominating papers for governor and will support John Norris in the Democratic primary, he told Bleeding Heartland by telephone this morning. On Monday, following a long drive back from an event in Jackson County over the weekend, Neiderbach determined he was unlikely to break through in a field with “lots of good candidates.” (He raised far less money in 2017 than did five other Democratic contenders.)

Asked whether he planned to endorse before the June 5 primary, Neiderbach said,

I’m supporting John Norris, there’s no question about it.

When you’re running, you get to see all the candidates up close a whole lot. And there’s no doubt in my mind that he has the experience, and disposition, and passion to do the things we need in Iowa.

I enclose below a news release from Neiderbach. In alphabetical order, the remaining Democratic candidates for governor are:

You can read or listen to versions of those candidates’ stump speeches here, here, and here.

All except McGuire have already qualified for the primary ballot. The deadline for submitting nominating papers is March 16. “By pure chance,” Neiderbach said during our interview, as he was planning to call Norris this morning to relay his decision, Norris reached out to him, offering to help collect signatures on his petitions.

I deeply appreciate the opportunity to visit with and learn from my fellow Iowans as I campaigned for Governor this past year. Our state is very diverse – demographically, politically, economically, culturally, and physically – but also very united in common beliefs and concerns. Iowans seek high quality education that provides opportunity, not disrespected teachers and unaffordable tuition. Iowans expect efficient and effective government that helps people, not mismanagement that focuses on corporate profits. Iowans demand policy that is fair and equitable, not stacked in favor of the rich and big business. Iowans want leaders who have the necessary skills and share their values, not incompetent pushovers and right-wing ideological extremists.

While I believe that I would be a very effective Governor, providing the experienced, passionate and innovative leadership Iowa desperately needs, it is clear to me that I am not a very effective candidate for Governor, and I have not garnered the support to justify continuing my campaign.

I therefore will not file to be on the June primary ballot. I thank everyone who gave me advice and support and criticism this past year, and I vow to continue to fight for economic and social justice. Ted Kennedy’s words still ring true: “The work goes on, the cause endures, the hope still lives and the dreams shall never die.”

UPDATE: A few readers have said they are surprised Neiderbach didn’t endorse Glasson, who shares his stance on some major issues (namely single-payer health care). I sought further comment from Neiderbach, who explained,

John ran Jesse Jackson’s [1988 caucus] campaign in Iowa – doing that was truly talking truth to power – and he has extraordinary government and political experience. I’m pro-Norris not against anyone else.